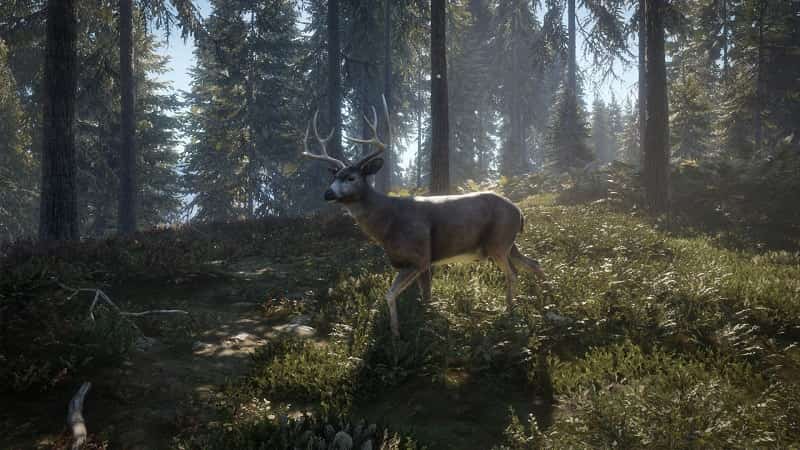 I’ll be honest, hunting games aren’t really my bag typically. Indeed, the nearly 20 year heritage of the sub-genre, beginning in 1997 with the bluntly, though aptly named Deer Hunter on PC, was pretty much lost on me up until I got my paws on The Hunter: Call of the Wild from Just Cause developer Avalanche Studios and Expansive Worlds.

Now however, I’ve come to realize that The Hunter Call of the Wild is much more than just some rote hunting effort, it also happens to be one of the most singularly engaging and satisfying stealth games you can experience right now on PS4, and one whose escapist virtues and outdoors allure feel all the more keenly felt during these uncertain times.

Much of the allure that Call of the Wild exudes comes from the world itself; a painstakingly detailed organic expanse that exceeds some 50 square miles of natural flora and fauna, that is in turn bolstered by a dynamic weather system, there are few better backdrops to Call of the Wild’s satisfying kind of stealth than what Avalanche Studios has wrought here.

Where Call of the Wild stands dramatically apart from its genre stablemates is in how it prizes, somewhat obsessively, the chase of the hunt arguably more than any other aspect of the typical stealth-kill gameplay cycle. Figuring greatly into this approach is the level of AI that the developers have bestowed upon Call of Wild’s various animals and other such furry denizens.

In addition to a digital manifestation of the instinctual fight or flight response that most animals have, there are a great number of elements that your prey can use to keep themselves from being a trophy on the wall of your log cabin. You see, it’s not just the obvious things like being spotted or creating too much noise that can alert your quarry to your presence, but also other factors such as being able to catch your scent on the wind (assuming it’s blowing in their direction), and the ability to hear warning calls from other animals that have detected you, which they can then use to make a hasty escape.

In this way, the variety of animals that roam the lush environments of The Hunter Call of the Wild are each part of a unique early warning network, where rather than just dealing with a single prey, players have to widen their understanding of how stealth works and realize that they are dealing with a collective of creatures that is focused on self-preservation and survival, rather than just a singular animal. An interconnected network of prey, if you will.

From the point of view of the hunter, they are hardly without recourse to even the playing field however, as the array of tools at the disposal of the player to track their mark is substantial. From being able to identify feeding, drinking and rest habitats of various animals to tracking marks in the soil, using lures and studying droppings to ascertain how close or far away a potential kill is, there is never a shortage of means for hunters to keep the hunt going.

And it’s here, where the vast abilities of both hunter and prey collide that Call of the Wild’s hunt chases gain both length and satisfaction all the while the near endless beauty of its environments provide quite the backdrop for emergent player stories to manifest themselves.

Make no mistake, though Call of the Wild invariably lacks the short-term and more immediate thrills of other stealth efforts such as the Hitman franchise, the satisfaction of taking down your quarry after spending over an hour tracking it through woodland brush, plowed farmland and craggy cliffs, is one that no other game can presently rival.

As such, The Hunter Call of the Wild demands a different sort of player; one who is as innately capable of holding their nerve as they able to demonstrate the resolve to relentlessly pursue their prey over considerable time and distance. This is not your everyday sneaky murder effort, that much is certain and quite honestly, any game which makes the question “Does a bear crap in the woods?” a relevant one that directly impacts the player’s experience, is one that demands your attention.

The Hunter Call of the Wild