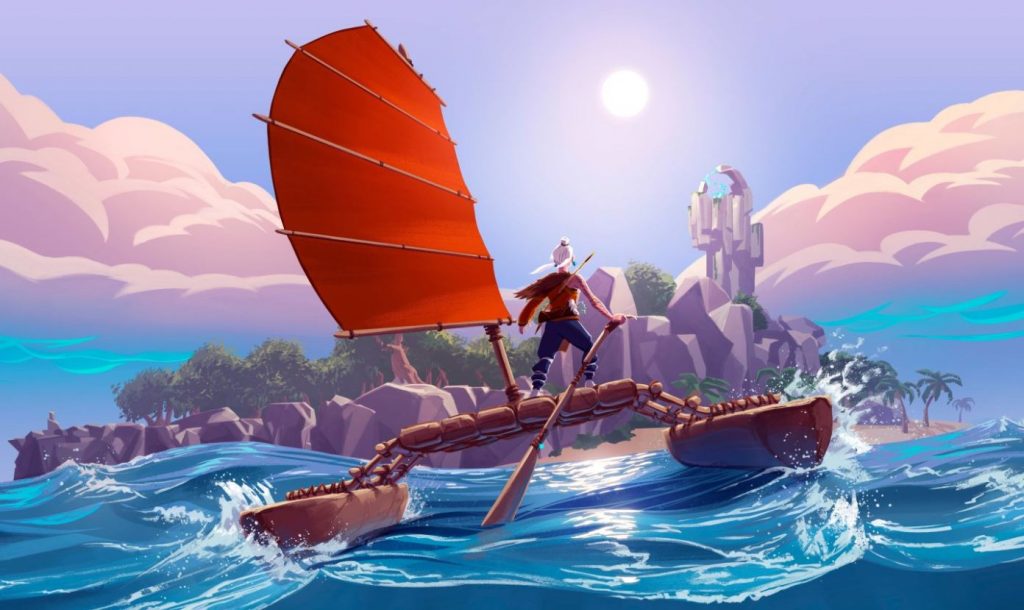 WIndbound PS4 Preview – Back when it was announced, Windbound immediately caught my attention with its art style and unique take on exploration and survival, with you building up your boat and traversing different islands hoping for more upgrades. So, when I sat down to play Windbound last week I was excited to see if the game played as interesting as it looked. And, I can report that Windbound has a magical atmosphere with excellent music, sound effects, and the natural exploration that made The Legend of Zelda: Breath Of The Wild so special.

Editor’s Note: This preview was done through cloud game streaming using Parsec; therefore, I couldn’t get a full idea of some aspects of the game, like how responsive combat was or whether the controller gives good feedback to the player. Points that may have been affected by my streaming experience will be highlighted in the following text for clarity.

An Uncharted Ocean To Explore

Windbound’s world is simply gorgeous. A vast ocean for you to explore and uncover every secret within is a compelling way to grab the player’s attention, while the basic mechanics of exploring are wonderful. Being able to climb to a vantage point, spot a tower in the distance and make your way to it is exciting and intimidating as you don’t know what you will find on the other side. 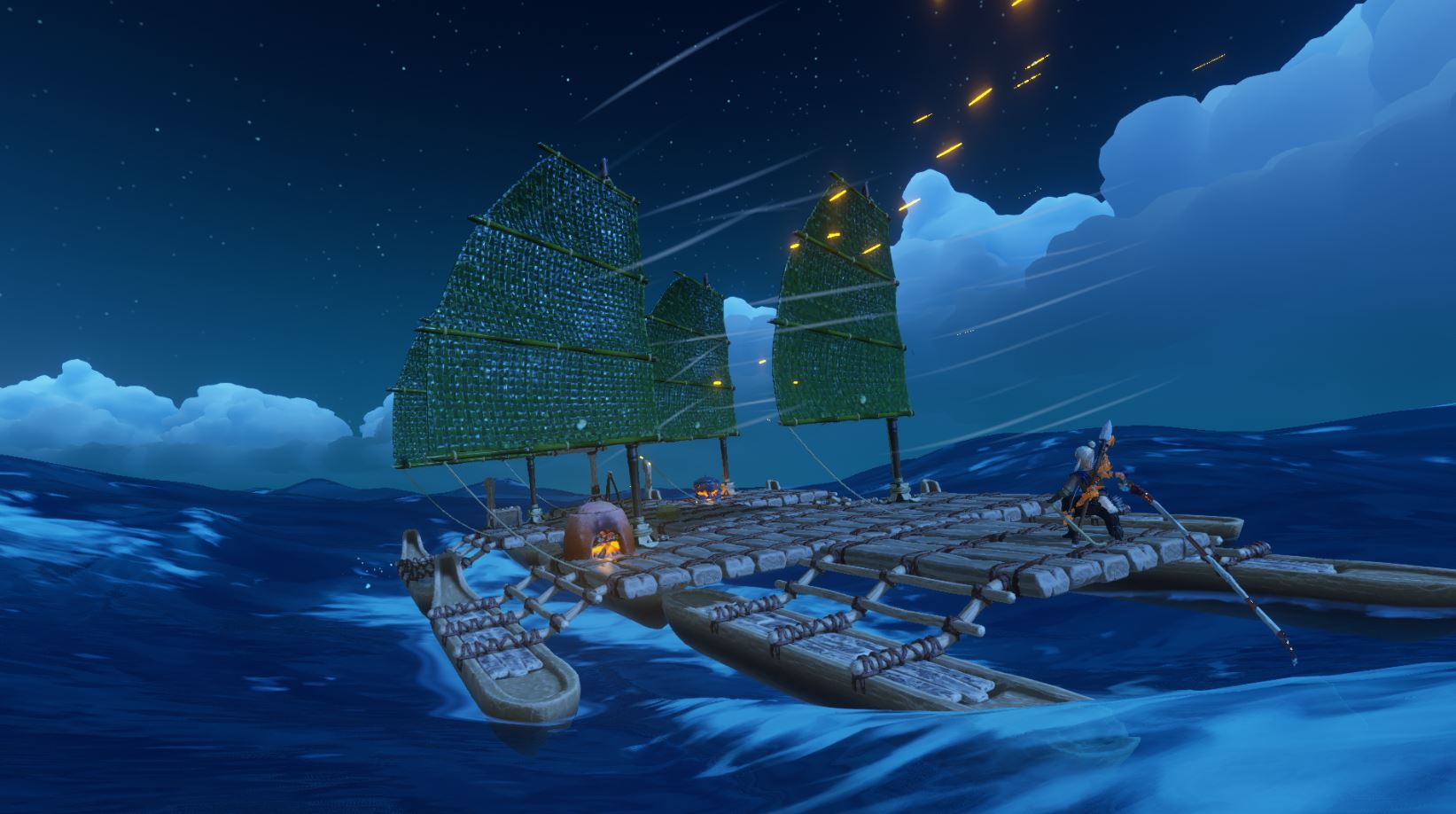 You will, however, be distracted along the way. As you power your small rowboat across an empty body of water, you might see a small island in the distance that wasn’t visible before and decide to go there instead. That happened multiple times during my playthrough, and it reminds me of the magic of Breath Of The Wild: constantly being distracted by objects in the distance and exploring naturally rather than being told to visit island seven of 20 for side quest five of 15.

There is also no need to worry about the ‘Survival’ mechanics when it comes to exploration as Windbound is really a survival-lite game. Sure, you have a stamina meter that depletes when you are hungry and your boat can get damaged if you hit a rock or coral reef in the water, but for the most, part Windbound is quite forgiving and I loved my time with it for that.

I don’t need to be dragged down by five different meters that constantly need replenishing and the stamina and hunger ones here keep you on your toes and add a nice pace to exploration, rather than forcing you to rush around and look for twenty berries so you don’t die in the next ten minutes. 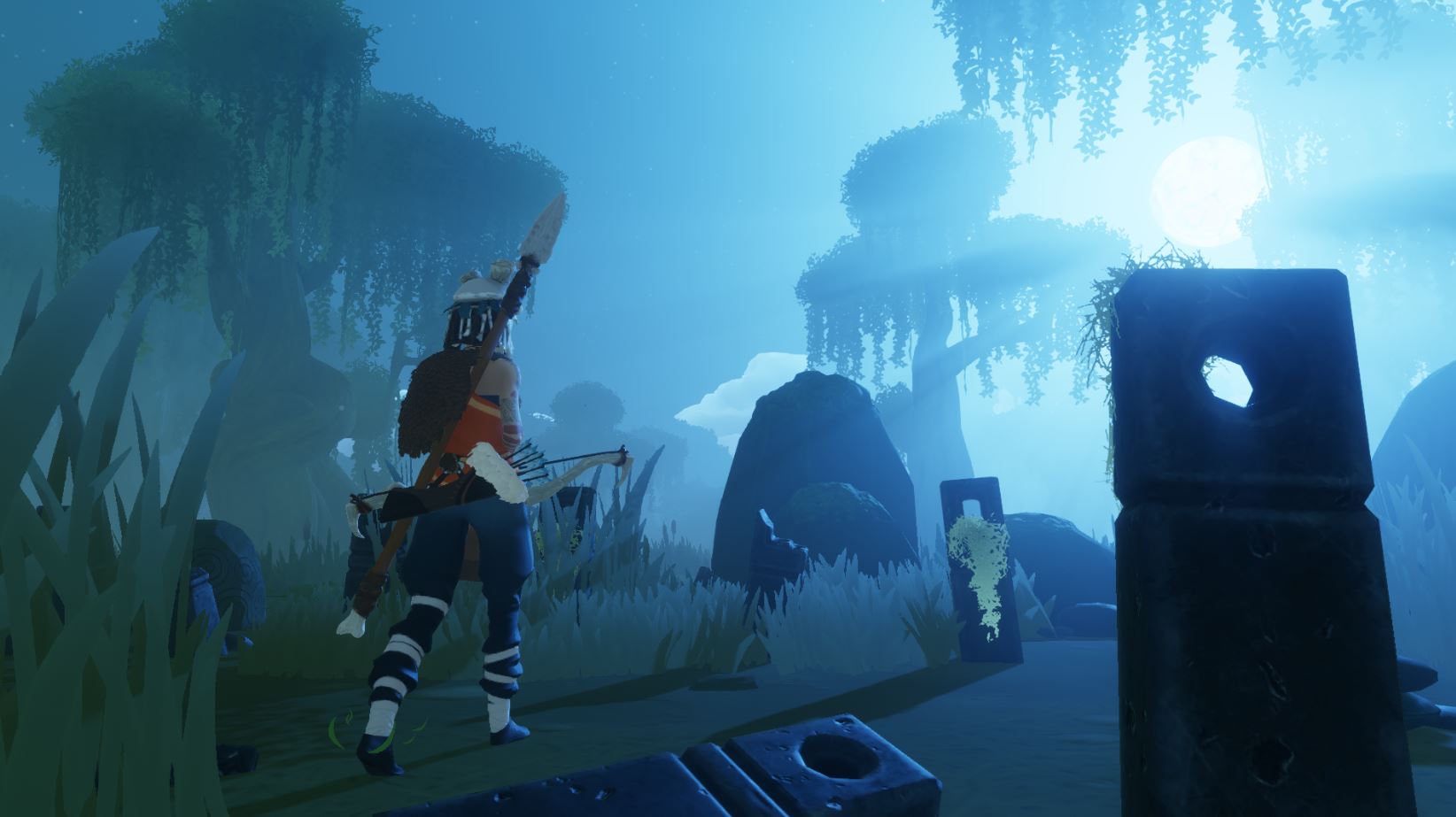 The management systems in Windbound were far more restrictive than I initially would have liked. At the beginning of the game, you are severely limited in storage space, meaning that you can only take a handful of things with you, leaving everything else behind. This does improve later as we were thrown into a later game section and our storage space was vastly increased and I was able to hold almost everything I wanted to pick up. But, it seems like initially the game will be quite punishing and force you to drop items and return to the island later to retrieve it.

Crafting is also nice and speedy with you only needing a handful of different materials for each object you want to craft, whether it be a weapon, storage, or an upgrade to your boat. The act of crafting also only takes a second or two, so you are able to make a new spear in the heat of combat without having to leave the enemy alone and return with your newly crafted weapon. 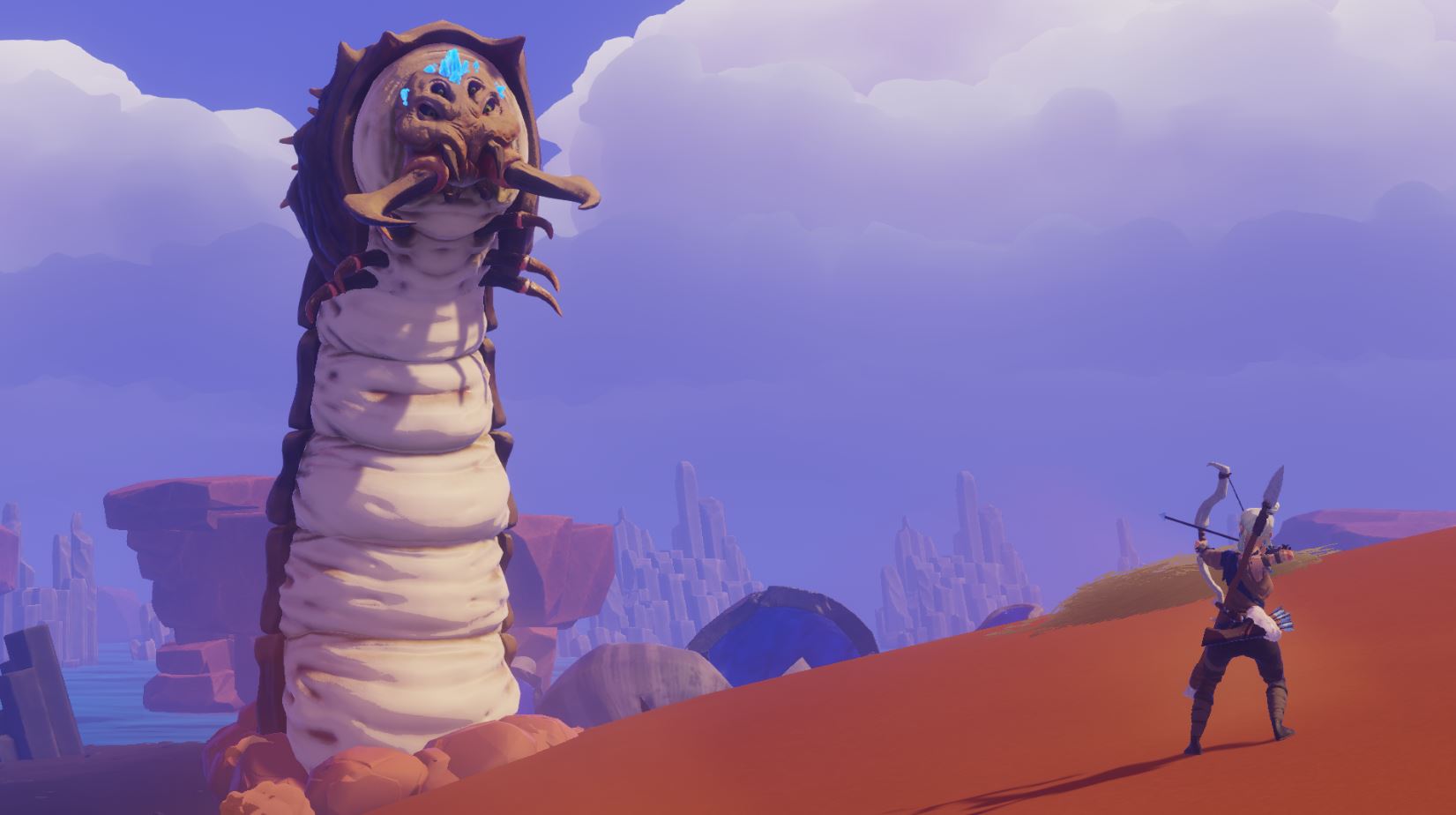 The combat is where I had the most trouble with Windbound. It is fairly simplistic, with you able to dodge and attack, but something about it just didn’t quite click. It felt a bit disjointed and the responsiveness wasn’t quite there. This might be due to the fact that I was playing over the internet and I wasn’t getting any feedback on my controller. Plus, streaming comes with its difficulties such as the occasional sputter and missed frame. So, I wouldn’t make a judgement on the combat just yet; check out our review at the end of the month to see what we thought.

Windbound is a survival game that tries to balance that gameplay with a narrative experience. From what I was able to see, the team at 5 Lives Studios has done a good job at doing just that. The narrative teases I got were mystifying, magical and enchanting, with the end of my demo culminating in a boat ride through a stormy ocean, embedded within a tall dilapidated cathedral and a giant sea monster rising to the surface. Unfortunately, I didn’t get any further than that, but that moment had me intrigued about what story the studio is trying to tell and just what other great set pieces might be lurking in the game. 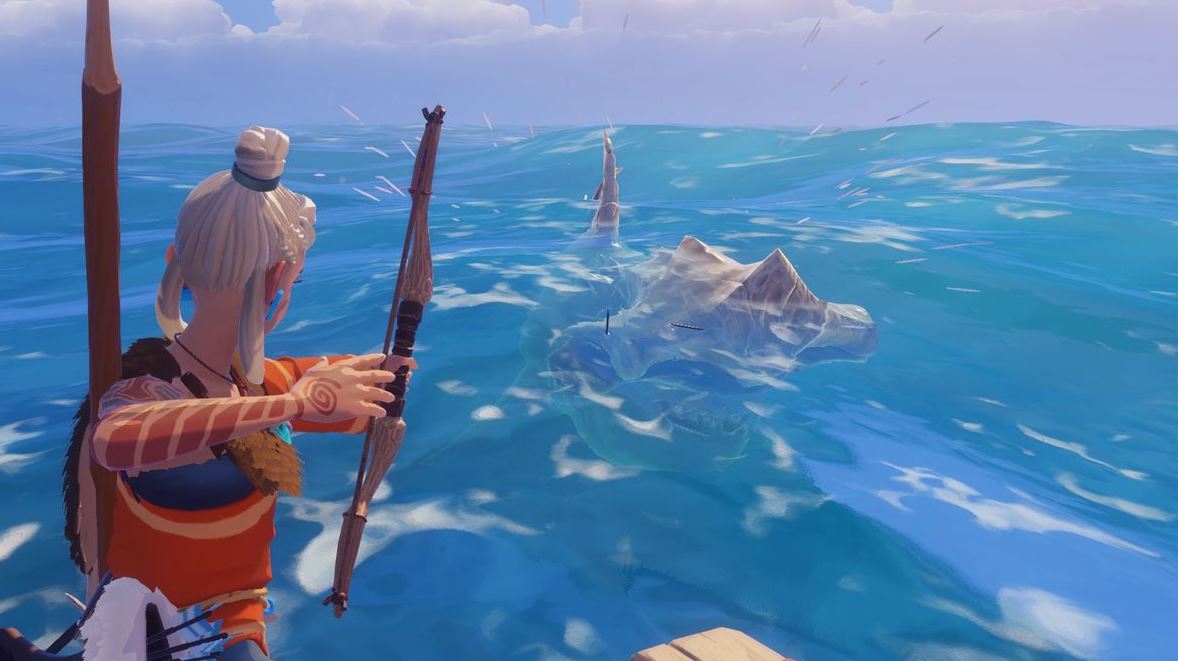 When it comes to the main objectives, Windbound left a lot to be desired from the sections of the game I played. Every objective I had for the main quest involved me climbing towers, interacting with the switch at the top to open a larger gate and move onto the next area. During the opening of the game this wasn’t an issue, but when I hopped forward I was slightly disappointed to see the same gameplay loop reused, leading me to wonder if the entire experience is climbing towers. I don’t know for sure, but you are probably not going to find any amazing unique or different main quest objectives here.

On the plus side though, these moments do allow the game to show off just how beautiful it is, with the camera panning out and showing the gorgeous vistas and beautiful weather effects in the background.

A Different Take On Survival

Windbound has a magical and enchanting atmosphere with some great narrative teases from what I played and beautifully melodic music and sound effects. The less punishing take on the survival genre is welcome, and I am excited to see what the progression of building up your boat and slowly getting stronger is like in the full game.