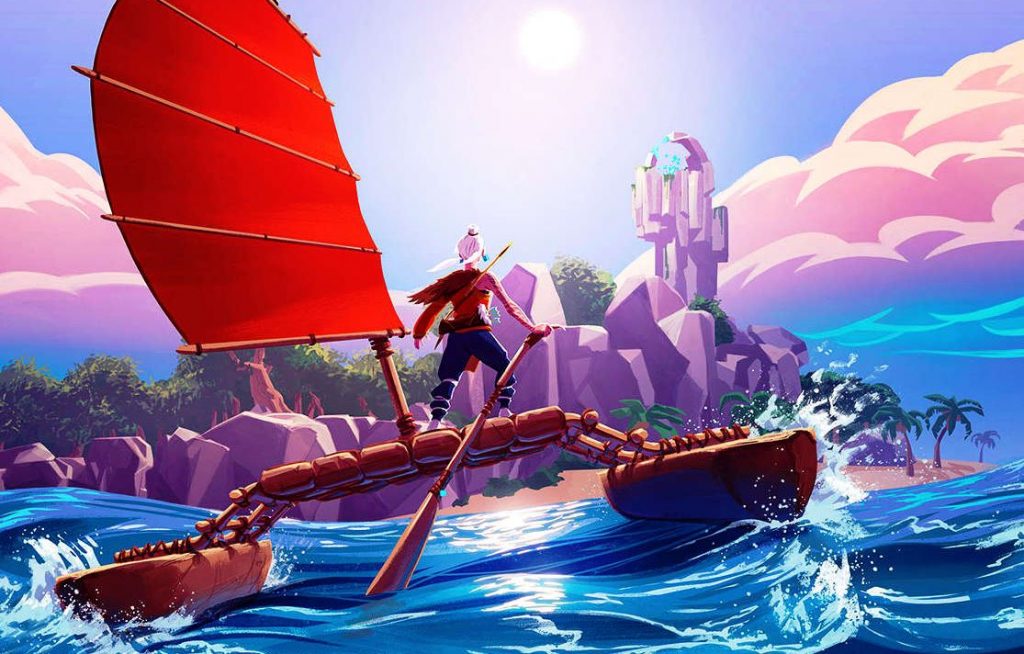 Windbound PS4 Review – Windbound is a hard game to review because it isn’t bad and it isn’t particularly great. There are some moments of glimmer and hope in the title, where the wonder and spirit of the game shines through, but for the most part, the harsh survival mechanics and dull main path and objectives don’t do anything to help the title, leading to a wholly fine experience.

From the onset, Windbound was pitched as a survival game that blended that gameplay with an engaging narrative and protagonist. But, whilst that balance is there and accompanied by a decent amount of narrative mystery and intrigue buried into Windbound, the survival gameplay ultimately pulls away from that narrative with frustrating and punishing gameplay.

The moments of mysticalness and charm do stand out, such as riding through the waves as a giant sea monster pops up around you. They inject the proceedings with a nice bit of flair, but the surrounding gameplay and exploration don’t have much of that charm beyond some glowing ancient architecture.

Windbound’s survival gameplay is up to par for traditional games of this genre and the option to choose between a lighter ‘narrative-focused’ difficulty setting and a harsh ‘survival-orientated’ difficulty was welcome, and allowed me to choose how I wanted to approach Windbound.

As with most survival games, you are given limited storage space, stamina, health, hunger, and will constantly need to watch where you sail your boat to ensure you aren’t hitting any rocks or obstacles in the ocean. I found I had a comfortable amount of storage, health, and stamina, but hunger came about far too fast which limited the amount of stamina I had and made running across the game’s many islands frustrating and a pain.

When it comes to sailing, Windbound’s mechanics are excellent. After you make it past the initial paddleboat, sailing becomes reliant on using the wind to propel your boat to the next destination, which is incredibly satisfying, albeit challenging as well. Learning the right angle to catch your sales in the wind and slowly drift forward was one of the most rewarding parts of Windbound’s survival gameplay.

Combat here leaves a lot more to be desired. While there is a nice variety of weapons, from spears to bows and slings, the actual feel of combat encounters is very two dimensional and simplistic.

For the most part, it boils down to dodging an animal’s attack and then getting one or two hits in as it recovers. Repeat this over and over until you slay the beast for some materials to craft new upgrades for your boat or food to eat.

And, on top of that simplicity, the way combat handles and the responsiveness of it is quite lacklustre and whenever I have to take on enemies I was disheartened that I couldn’t just explore the world.

One thing that is worth mentioning though is that the sound and music in Windbound is great. The piano melodies and chimes that play when unlocking a path ahead really build the sense of mystery and wonder in the world and I could easily see myself listening to the soundtrack once I go back to University in two weeks and have to revise.

As a whole, however, Windbound is a package that is fine and works but it doesn’t exactly stand out from the mountains of other survival outings out there, with the game’s narrative aspects not being strong enough or focused upon to a great enough degree that I was left underwhelmed with the final offering. I also experienced a fair few bugs including my UI disappearing and objects flying randomly.

Windbound is a hard game to recommend purchasing right now due to how simplistic and lacking in complexity its survival and combat is. The exploration is one of the better aspects and the world looks stunning, with the excellent sailing mechanics offering a nice change of pace for hardcore survival fans.

Ultimately, the final product is a game that works and doesn’t offer much to keep you engaged and enthralled in its gorgeous world beyond the first few hours.

Windbound is available now on PS4.

Windbound is a serviceable survival game that offers a unique sailing experience to keep hardcore fans of the genre interested. But with simplistic and bland-feeling combat and an experience that doesn't engage with its narrative (despite promising to), Windbound isn't recommended at full price.