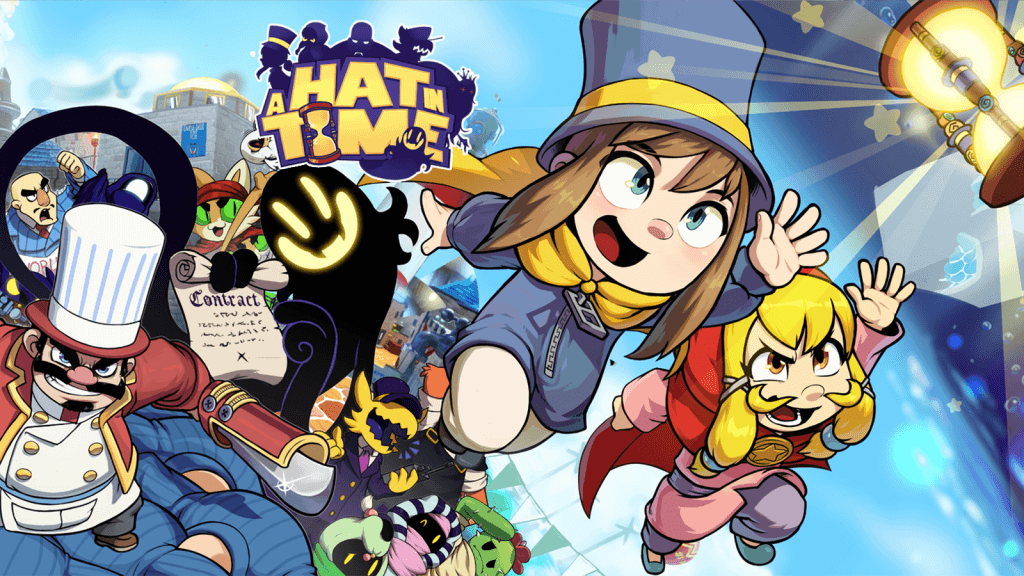 A Hat in Time review code supplied by the publisher.

Recently, it’s fair to say that the whimsical 3D platformer has seen something of a resurgence, with the likes of Yooka Laylee and now, A Hat in Time, both bringing a calibre of platformer which has been long forgotten to contemporary console platforms. Whereas Yooka-Laylee played things fairly straight and attempted to capture something that gamers had already experienced with Banjo Kazooie, Hat in Time instead takes the best of such inspirations and spins it around a heart-warming tale that feels as rooted in the present as it does the past.

Rather than controlling a plumber or an anthropomorphic animal duo, A Hat in Time instead lets players step into the refreshing shoes of a space-travelling girl with an affinity for magical hats. Where things go awry of course, (as they so often do), is that an accident causes her to lose all of her Time Pieces; powerful trinkets that allow the wearer to manipulate time, and these Time Pieces are then scattered to five different worlds where they must be retrieved from.

And what different worlds they are. Each one overflowing with character and personality, one might have you traipsing around a rain-hammered town run by insane mafia chefs, while another could have you skating around a colorful movie studio staffed with birds. Generally wherever you end up going in A Hat in Time, you can be sure of a refreshing change from the usual gamut of ice and fire worlds that less imaginative genre fare usually employ.

As one might expect, these Time Pieces are the precious macguffins that you’ll spend the majority of your time chasing around in A Hat in Time; the equivalent of Mario’s Gold Stars, if you will. In a manner akin to the likes of Super Mario Odyssey and Yooka Laylee though, there are other bits and pieces to collect, but quite unlike Playtonic’s collect-a-thon, it all feels like it meaningfully adds to the experience.

Take the color-coded safes dotted around each world for example. In order to open one, you must first obtain the three color matched code slips that are located in different areas. Once opened, the reward often ends up being something useful, like a ball of yarn for to you knit a new hat with for example, rather than some sort of drab token collectible whose existence feels akin to busywork than something you want to seek out.

In further deviating from the 3D platformer norm, A Hat in Time keeps things refreshing by weaving in little side quests that do more than just have you jumping about the place, ticking things off of your collect-a-list. In one world for instance, you might have to arrange a band during an epic parade, while a side quest in another takes a leaf from The Murder on The Orient Express, and has you questioning folks about a murder in order to discover the culprit. What such scenarios prove is that a 3D platformer can do and be more than just a collect-a-thon, and as such, A Hat in Time should be commended for embracing such an approach.

When it comes to how our plucky heroine navigates these various worlds that she finds herself in, it turns out that she can do more than just jump around and hit things. If it isn’t obvious already, hats are a big deal in this game and more than just looking cool, they actually do a number of neat things that allow you to access previously accessible areas in the various worlds you'll come across. The speed hat for instance, allows Hat Girl to clear long leaps that she would not have been able to make before, and provides the player with ample incentive to revisit previous worlds and acts to discover new treasure and secrets.

More than just the sum of their abilities, these hats can also be upgraded with special badges that can be bought from the locals with the green crystals that are strewn around the game world, offering useful buffs such as a magnet to suck in collectibles and more besides. Simply put, there's more to the hats in A Hat in Time than meets the eye and in being so layered, it adds much more to the game than one might comprehend on first glance.

As much as a Hat in Time gets right and as much as it simultaneously seems both similar and different to Yooka Laylee, it also suffers some of that game's flaws too. Starting with the camera, A Hat in Time doesn't allow full control of the camera, which though not a consistent issue in itself can prove annoying in sections of the game where the perspective sticks too close to Hat Girl, thus making it difficult to see ahead where you need to go next.

Additionally, the platforming can feel occasionally feel a touch imprecise at times too, with Hat Girl's collision detection with the game world feeling a little haphazard at times, resulting in some failed leaps where success should have perhaps been granted. Luckily though, A Hat in Time doesn't penalize death by falling too harshly, and otherwise fatal falls literally just respawn your character to the location where they were a few seconds prior.

More than being a giddy and charming throwback to the 3D platformers of old, A Hat in Time excels primarily on account of the wealth of character that it possesses. From the infinitely cute character designs, to charming little moments, such as the idle animations where our heroine begins playing with a pair of dolls, it's clear that A Hat in Time has more character in its pixel pinkie finger than most games have for their entire duration.

Overflowing with warmth and whimsy, A Hat in Time has come out of left field; offering up the sort of boundlessly entertaining and enjoyable platformer that the PS4 should really have more of. A slightly off camera and occasionally imprecise platforming can’t dull the lustre of one of the most memorable feel good platformers in a long while. Without a doubt, fans of the genre should make A Hat in Time their next purchase.

Did you enjoy this A Hat in Time review? For more details on the game, check out the official hub for A Hat in Time.

Buckets of adorable charm and solid platforming fundamentals win out over some minor shortcomings to cement A Hat in Time as one of the best surprises of the year.

A Hat in Time