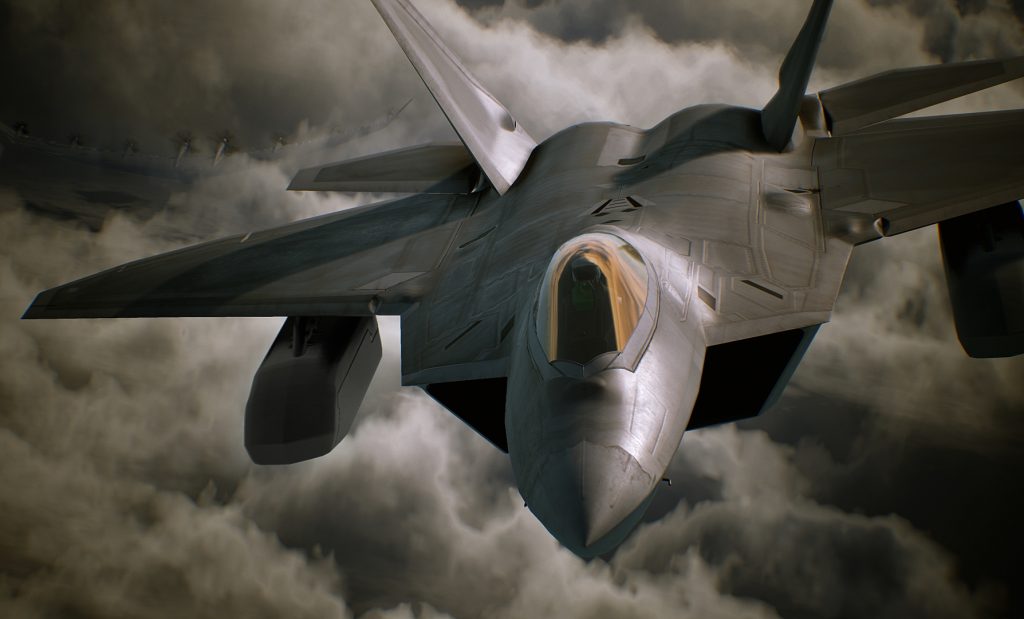 After years in exile, Ace Combat 7: Skies Unknown returns to the world of Strangereal, once again offering the promise of tense aerial combat and compelling drama that defines the series. As the first numbered Ace Combat title since 2007, Skies Unknown had a lot of heavy lifting to do to get past the mixed responses to the most recent variations on the Ace Combat formula, Assault Horizon and Infinity. Expectations were high, and the stakes even higher for Bandai Namco’s bid for air superiority. Luckily Ace Combat 7 thrives in the danger zone.

Returning players will feel perfectly at home the moment Ace Combat 7 starts, flipping through the vector-graphics inspired UI that has been used since Ace Combat 4: Shattered Skies, briefings using wireframe maps to display overwhelmingly bleak odds, and rock solid controls that are weighty yet responsive.

Adding this to supporting the use of either a standard controller or a full HOTAS flightstick, Ace Combat 7 wastes no time in confirming its pedigree as a precision instrument of air superiority.

Highly polished cutscenes following stories of survivors of war have long been a component of the Ace Combat series, and continue to be very effective in this entry. They set the stage for the new developments in the ongoing conflict in Strangereal, currently featuring a new conflict between the nations of Osea and Erusea, and provide a larger context for your missions beyond simply following orders.

These are juxtaposed with the missions that you fly as the newbie pilot ‘Trigger’ (later known as Spare 15), framing your experiences as just one more thread of the narrative woven between characters on both sides of the conflict. Radio chatter between your fellow pilots and commanding officers constantly flows through your headphones, providing constant updates on mission parameters but also humanizing these characters who are often little more than blips on your radar.

It becomes easy to grow invested in the success of each mission as the stakes feel personal, making those moments where operations take an unexpected turn to be even more keenly felt. Trigger’s role in shaping major political events emerges as a redemption story, as his ‘assignment’ to the Spare squadron serves as an unexpected vehicle (literally) to get back into the war and clear their name.

Visually, Ace Combat 7 is stunning. If you’ve been living under a rock for the past two years and somehow missed the steady stream of photo-realistic screenshots of aircraft pornography that Bandai Namco have trickled out, rest assured that every moment of Ace Combat 7 is a visual marvel. Never has the ground that I crash into looked so realistic.

Every plane is a licensed replica of their real-world counterpart and the care that has been lavished on the models is incredible. All control surfaces move as the planes maneuver, engine nozzles expand and contract as thrust changes, unique features like variable geometry on some aircraft, even a unique cockpit when flying from a first person view — from flaps to air brakes, no detail has been spared to make these aircraft as realistic looking as possible.

Even when watching light stream through the canopy of your aircraft as you maneuver, you will see it playing across a thousand microscopic scratches in the acrylic that would be otherwise invisible on direct examination.

This attention to detail has been extended to the world as well, with terrain details and environment having been given a major upgrade. Volumetric clouds in the skies create rivulets of condensation on your canopy as you pass through them, even potentially causing icing when exposed for too long. These details are not simply cosmetic either, as the variable density of clouds not only affects visibility but also AI behavior as they seek to take advantage of the environment before you can do the same.

High winds can have a surprising effect on both your maneuverability and the path of dropped ordnance, particularly in one mission that requires nap-of-earth flight through rugged canyons all the while fighting a literal sideways wind shear that constantly threatens to drift you sideways into a wall. Even more dangerous is being struck by lightning, with the massive discharge both blinding you and momentarily shorting out your HUD, usually putting you into a potentially fatal nose-dive for good measure.

Last but not least, we have to talk about the explosions. Damaged craft billow black smoke as they desperately whip through maneuvers to escape. Watching a missile break away from its mount and leap across the skies, balanced on a column of smoke that slowly winds its way towards your target — never has it been more satisfying to watch a billion dollar aircraft erupt in a shower of flames and wreckage. Even if you’re the one doing the exploding, I guarantee that you’ve never crashed into a more beautiful mountain.

Flight of the Valkyries

Paired with the visual spectacle, the sound design on Ace Combat 7 is impeccable. The thrum of every engine is unique and can be felt in the pit of your stomach with the proper sound system. Vulcans spin up and stream hot lead with a visceral buzz, chewing up the landscape as well as the target with an audibly distinct impact. Radio chatter is well performed and provides usable information in addition to atmosphere. Every missile hit or near miss, every warning klaxon when an enemy has missile lock, the production quality is outstanding.

Those familiar with Ace Combat Infinity will notice that they have included a similar unlock system in Ace Combat 7, which follows a more interesting tech tree rather than just making increasingly advanced planes available as you progress through the story.

Based on your performance in each mission, you will earn Military Result Points (MRP) which you can use to requisition aircraft, special weapons, and parts to customize performance. Each aircraft has three special weapons available to them, based on the aircraft’s role.

In addition, you can equip up to eight parts to provide bonuses such as increased maneuverability, speed or special weapons capacity. Each aircraft can only support a certain number of points of parts, so as you acquire more advanced components you may have to make hard choices about what to equip.

Multiplayer offers the expected modes, featuring Battle Royale (which is a points based game rather than a last man standing match) and Team Deathmatch. Any aircraft or parts earned in the campaign can be used in Multiplayer and vice-versa, with the exception of a substantial tree of multiplayer only parts that are suitably expensive.

Additionally, skins and nicknames earned in single player can only be used in Multiplayer, to further customize your appearance in matches. Games can be played in public or private rooms as well, ensuring that the experience is enjoyable for all.

Last but not least, Ace Combat 7 offers a seperate mini-campaign of VR missions (you can catch our full impressions here), delivering what I consider to be the new killer app for PlayStation VR owners. Promised during the PSVR launch, the Ace Combat 7 VR missions are an experience at least on par with Star Wars Battlefront’s X-Wing VR Mission, if not better.

Playing as Ace Combat 4’s Mobius 1, you will live out a part of Strangereal’s history in a way you never have before. In the cockpit, the pilot’s hands will replicate your movements, gauges and dials on the dash will provide real data, and you will have to keep your head on a swivel as you look for bogies inn the skies all around you.

As an added bonus, they have also included an Airshow Mode, where you can watch pilots put their aircraft through death defying maneuvers from the deck of an aircraft carrier to the accompaniment of classic Ace Combat soundtracks. While I would have preferred to be able to play the campaign in VR as well, the additional missions are still an amazing experience, and likely the lifelong dream of any Ace Combat fan.

There is little negative to say about the game. If you are familiar with the Ace Combat franchise, you will know exactly what to expect. Ace Combat 7 does a fantastic job of delivering a perfectly honed version of a familiar framework, making many quality of life improvements without radically redesigning the formula.

One might argue that it plays it too safe, sticking to its tried and true formula rather than innovating, however I would argue that changes introduced in recent Ace Combat games like Assault Horizon and the service-based Infinity were so polarizing that a return to the classic formula is exactly what this title needed.

As I played the game, I found myself debating this point internally, going back and forth on whether the game needed additional features or if that would only upset the apple cart. In the end I found it difficult to quantify what (if any) improvements I wanted to see in the game, which to me was in itself an answer.

Ace Combat 7: Skies Unknown is a love letter to long-time Ace Combat fans. It incorporates the improvements of recent games in the series and jettisons those that didn’t work, circling back to the classic formula and repackaging it for today’s audiences with a level of polish that would make Hideo Kojima blush.

Balancing the angst of seeing a war from multiple sides, every mission you fly feels consequential, your tiny contributions having an effect on the events of a world that is so much larger than the pilot known as Trigger. Whether this is your first visit to the alternate world of Strangereal, or you’ve been there enough to have a summer home there, Ace Combat 7 is a must for flight-sim fans and a fantastic addition to the series.

Ace Combat 7 delivers a perfectly honed iteration of a familiar framework, making vast visual and gameplay improvements while still maintaining the familiar structure of Ace Combat. Balancing the angst of seeing a war from multiple sides, every mission you fly feels consequential, your tiny contributions having an effect on the events of a world that is so much larger than the pilot known as Trigger. Ace Combat 7 is a must for flight-sim fans and a fantastic addition to the series.