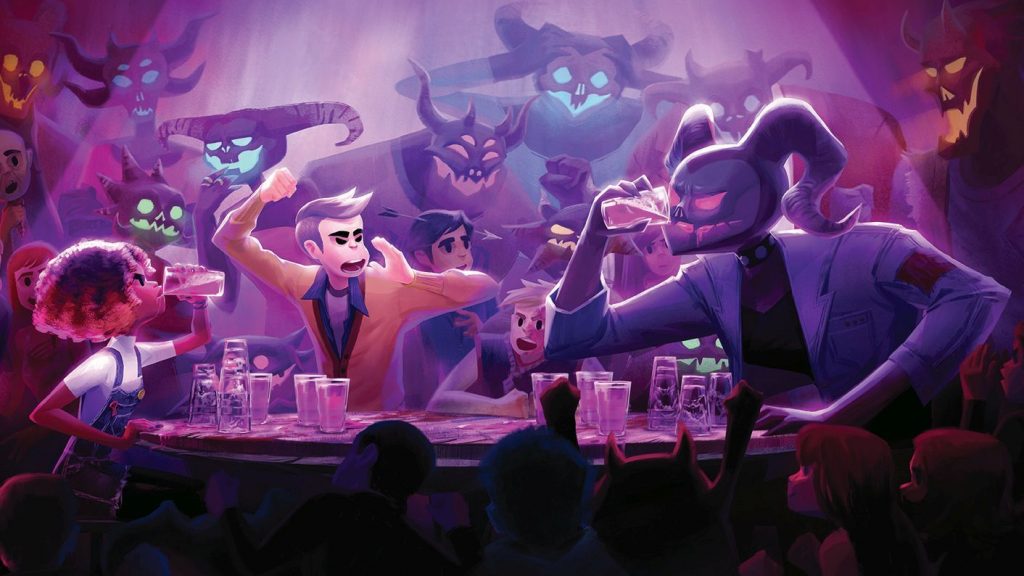 Night School Studio carved out their place in the industry with the excellent Oxenfree, but, with Afterparty’s release, the Californian based developer shows that they can do more and still create an experience like no other.

Afterparty is, to put it bluntly, fantastic, funny and a practically flawless experience. Every part of its sum simply works and it creates an experience that is vastly different from Oxenfree but still rooted in the same DNA.

Afterparty begins with you taking control of Milo and Lola, two long-time best friends at an end-of-year college party. But, it is quickly revealed to the two of them that the entire party was in fact an act, performed by Demons. The cardboard scenery of the college party falls away and Milo and Lola are actually dead and stuck in Hell.

Before long, they are quickly sent along to Processing, given their own personal demon, Wormhorn, and doomed to spend the rest of their lives wandering around the Islands of Hell, unless they can outdrink Satan in a drinking contest.

All of that sounds quite heavy and depressing, but Afterparty meshes the dark and foreboding world of Hell with a fantastic sense of humour and impeccable writing, giving the game the atmosphere of a comedy sketch. The game is practically overflowing with jokes and dark humour from accidentally and abruptly walking into a demon sex dungeon to someone being assigned their torture which consists of “her bones being broken every day for the sin of repeatedly misusing the express lane in grocery stores.”

That is the kind of humour you can expect in Afterparty and it works almost always. Some jokes are better than others but I never grew tired of it. Afterparty is one of the best video game comedies ever and it is thanks to the fantastic writing and voice acting that it works so well.

Every single voice actor feels perfectly cast, from Dave Fennoy and his booming voice playing Satan, to Ashly Burch and her friendly and enthusiastic cadence as Sam, a taxi driver and your guide through Hell. Sam particularly becomes one of the best characters in the game due to how much time you spend with her. There are dozens of other characters in the game and each one is just as memorable for the exact same reasons. Janina Gavankar and Khoi Dao also do a stellar job voicing Lola and Milo, respectively too. Simply, the voice acting and writing is the standout feature of Afterparty.

That humour and excellent writing extends into the world that Night School Studio has built. Hell feels like a fully realised place with its own schedule and institutions. There are multiple bars and places to drink eternity away, but there are also jobs for demons as well, such as those working in Processing, whose day ends at 6 PM when the facility shuts.

Hell feels like Earth but a lot bleaker and it gels with the game’s comedic tone excellently, creating some moments that are surprisingly relatable and parallel our real world. For example, Sam jokes about using a new toothbrush subscription service and how it has been more of a hassle than it has been worth. The game also breaks the fourth wall occasionally, sneaking lines about how you are playing a game into longer conversations.

A Personal Tale To Ground The World

You would be right to think that with the game cracking so many jokes, it would need another piece of the puzzle to compliment that comedy. And, it turns out it does and it comes in the form of delving deeper into the lives of Milo, Lola, and Satan. This is where Afterparty becomes so much more than just a drunken ride through Hell.

Milo and Lola complicated friendship and their individual lives are the focus of the story as Night School Studio dives into their history together, awkward situations they have been in, and their own personal insecurities. This is mostly achieved through Milo and Lola’s personal demon, Wormhorm, whose job is to personally torment the two of them about their choices in earlier life and feed off of their insecurities and misfortunes.

These sequences bring a heartwarming level of humanity to Hell and both of them are characters that I greatly empathised with, being a University student myself.

Satan’s story is really where Afterparty’s character development shines, with him and his siblings complicated lives of drinking and throwing parties, whilst also being responsible for running Hell being laid out bare for Milo and Lola to see. And, by the conclusion, you feel far more sympathetic towards Satan than you thought you ever could be.

I can’t speak highly enough of Afterparty’s writing and character development. I loved watching Milo and Lola experience Hell and I can’t wait to play the game again.

So, What About The Actual Drinking

Beyond getting to know the various denizens of Hell, you will also spend a large amount of time drinking your way through death and tasting the various beverages Hell has to offer. There is a wide variety of drinks to choose from all with uniquely funny names, such as the Bloody Stool and Literally Acid, the latter of which is, well, literally acid.

All of these drinks will provide you with a third option during conversations. These options can range from being aggressive to being caring and polite. But, each of these change depending on who you are playing as and what drink you are chugging. Drinks also have an effect on your vision, blurring certain parts of the screen.

Drinking also has a substantial effect on the various minigames in Afterparty. When aiming a ball in Beer Pong, three lines will be displayed if under the influence of alcohol and you will wobble, making it harder to land the ball in the cup. Stacking shot glasses also becomes harder as the icon signalling where the glass will drop will swing from side to side.

These minigames compliment the character focus of Afterparty and add a nice bit of levity and ‘gameyness’ to an otherwise bleak, and at times, depressing adventure. There isn’t a massive variety of these activities, but they pop up infrequently and stay engaging throughout the game’s campaign.

A Trip Through Hell Everyone Should Experience

I have hardly anything negative to say about Afterparty. Technically, the game isn’t flawless and a few frame rate drops and clipping issues reer their ugly head occasionally. However the humour, writing, world-building, voice acting and character development here are so fantastic that it practically erased those issues from my memory.

Afterparty is one of the best comedic games ever created and it is a stellar second outing for Night School Studio. I was smiling through every second I spent with Lola and Milo in Hell and no one should miss out on this dark, twisted, yet touching drunken ride through Satan’s homeland.

Afterparty is a fantastic and incredibly funny tale of friendship and the role drinking alcohol plays in society and the effects that drinking has on us. Night School Studio has created one of the funniest games ever made and their version of Hell is fully realised. The stellar voice acting and writing left me smiling from ear to ear constantly. Afterparty is a joy to play and everyone should take a trip to Hell.