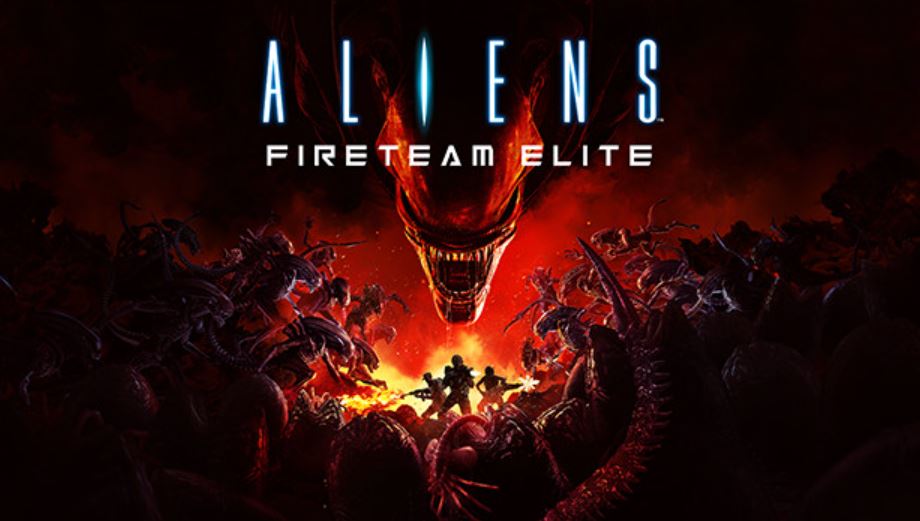 Aliens: Fireteam Elite Review (PS5) – The Alien franchise has had its ups and downs when it comes to video game releases. Alien has a long storied legacy with a loyal fanbase, and not every game has managed to live up to the name. We have been disappointed by the likes of Aliens: Colonial Marines, and perhaps spoilt by the beloved Alien: Isolation. Does Cold Iron Studios‘ Aliens: Fireteam Elite stand out amongst its predecessors? Well, I was certainly surprised to say the least.

Game Over Man. Game Over!

Aliens: Fireteam Elite is a third-person survival shooter. It has horde focused gameplay with some cover based mechanics that don’t often feel necessary. I always felt manoeuvrability was preferable to sitting behind cover, given how the enemy can quickly swarm. Aliens: Fireteam Elite has you fighting off Xenomorphs with firearms such as burst rifles, shotguns, flamethrowers, and the legendary pulse rifle. By combining the team’s abilities and weapons with consumable equipment such as turrets, mines, and drones that you will find throughout the levels, you should be able to efficiently hold off most of what the game throws at you.

The gameplay itself feels quite snappy and responsive. The weapons each feel unique, and satisfying to fire. There is plenty of customisable options that you can apply to your weapons, whether that’s adding attachments, or applying various cosmetics to give things a more personal touch. Although, I could do without the obnoxious weapon skins, and emotes that have become a staple in modern multiplayer games, as they do feel out place here. 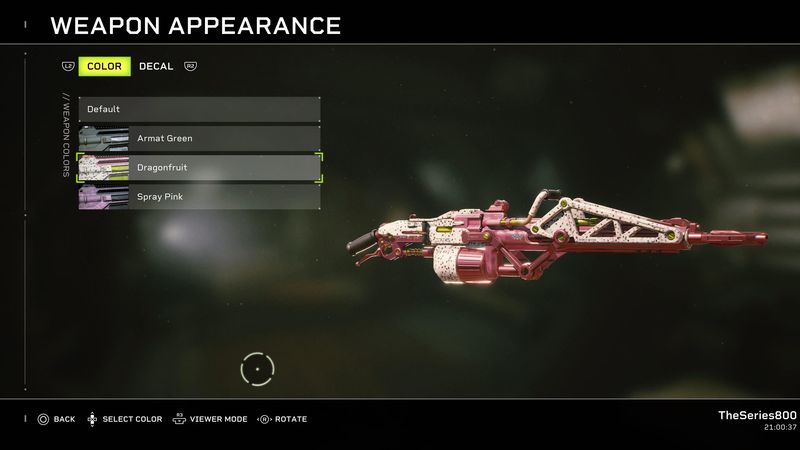 Aliens: Fireteam Elite sees you squad up with two other players, or AI teammates, and battle through the campaign mode, which consists of fairly linear levels and repetitive objectives. Alternatively, there is also a horde mode, which is made available much later. You’ll be able to create and customise your own character within a fairly barebones creation suite, that doesn’t really offer too much personalisation.

There are four different classes to choose from and each is uniquely equipped with their own loadouts and abilities. The selection of weapons is different for each class, which is important for balancing purposes, if the class has a powerful kit. For example, the technician has two powerful abilities in their mobile sentry turret, and charged coils, which allows them to lockdown an area. Therefore, their primary weapon is limited to a handgun.

Each class offers its own advantages, and you can easily see how team composition is vital to successfully completing a mission, particularly on higher difficulty settings. My favourite loadout, is The Demolisher. Their secondary is a heavy weapon such as an auto-targeting mini gun, or a flamethrower. Both are incredibly satisfying to mow down the fodder, swarming towards you. 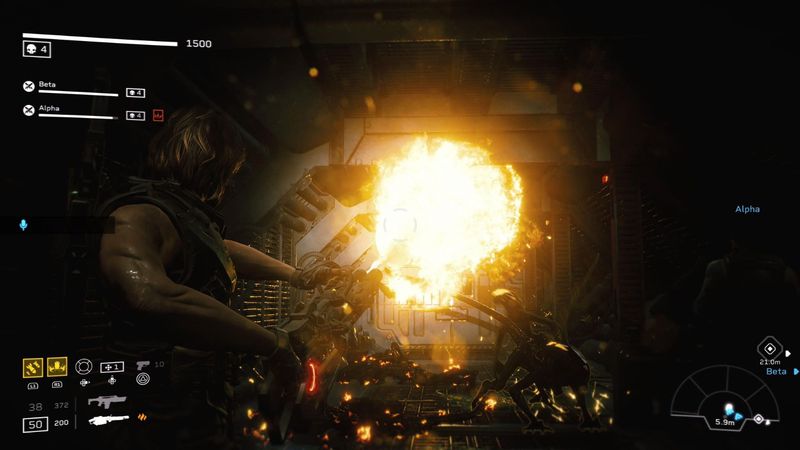 There are different types of Xenomorphs which diversify the combat and keep you on your toes. Some types of enemies will be familiar for fans, whilst others are new. The runners, as they are named, on their own won’t cause you much of a problem. They are strong in number, but fairly easy to dispatch. However, throw some Xenomorph prowlers, Spitters Bursters, and Warriors in there, and they can quickly overrun you. Sometimes the enemy AI behaviour seemed to act erratically, which doesn’t help in an already chaotic game.

Meanwhile, Xenomorph Prowlers have the ability to pounce on you, which will require the player to complete a QTE sequence in order to shake them off, unless your teammates intervene. Spitters will stay at range and hurl acid towards you, and Runners are smaller, more nimble Xenomorphs that will scramble, and scurry across walls to keep you guessing. They actively slalom towards you, dodging the line of fire. It really captures the evasive nature of the Xenomorphs we saw in Aliens.

The Xenomorph Warriors, however, are much larger in size, and with two health bars, they take a bit more putting down. They also have the ability to pounce on you, and know when to retreat to an air vent or a crack in the wall, to get a second shot at you. These Xenomorph Warriors are the sort you might be familiar with from the original Alien movie. There is also the Praetorian Xenomorph, a more formidable foe, especially given its armoured plating. Impressively, no matter how cluttered the screen becomes with these different enemies and effects, the performance remains very smooth. 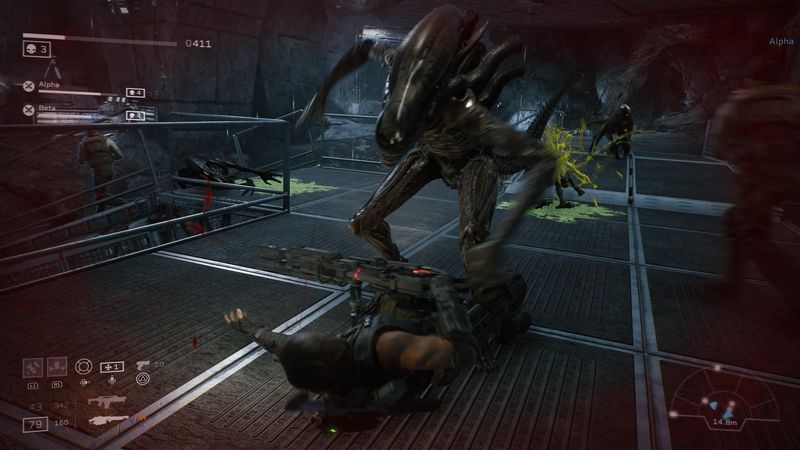 For those who want to play solo, there is the option to play without other players, and instead take on the horde with AI teammates. I was surprised by how efficient the AI teammates can be. They will always try and heal you, and they will pull their weight when it comes to damage output. Having said that, you will have a much better time playing this game with friends, and you’ll definitely fair better when the difficulty spikes at the end of certain missions. What I really liked, is that these AI teammates aren’t just randomly generated colonial marines, but actual Seegson androids, firmly rooted in Alien lore.

There is also a considerable amount of depth to its systems. Although, The menus displaying these systems aren’t always intuitive. When you level up a class, you will start unlocking perks for your abilities and weapons, such as faster cooldowns, or increasing damage on certain weapon types. You can apply these perks on a grid, but space is limited so you have to choose wisely.

Applying the perks and levelling up your preferred loadout, raises your combat rating, which is necessary to gauge for the missions ahead. Prior to missions, you can also activate challenge cards, which will add a stipulation to the next mission, and you’ll be rewarded upon completion. Rarely do they seem worth it, though. 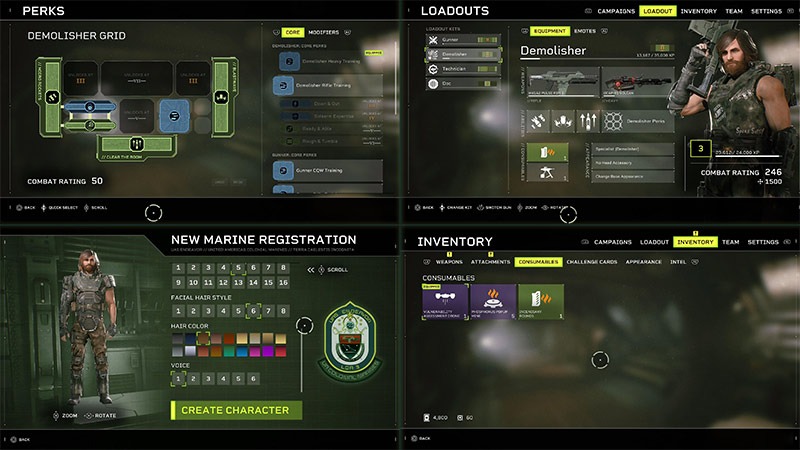 The Other Kind Of Bugs

The objectives in the game tend to focus around having you guard a point of interest, in order to deliver the horde style gameplay. Whilst this can create awesome, final stand moments, against the waves of enemies, it can also get quite repetitive. However, the gameplay being as addictive as it is, you can almost forgive it. Sadly, there was a few occasions where I run into a bug that did not allow me to progress to the next objective. With no checkpoint system within the individual missions, this can be quite frustrating.

The voice over the radio, informing you of your next objective can be quite annoying when they are repeatedly telling you what to do, repeating the same dialogue, when you’re fighting off waves of enemies. At the same time, if you’re not paying attention to your radar sensor, they do warn you when you’re being flanked which is rather helpful.

The presentation is ok, if not a little bland. The HUD is easy to understand, and comes equipped with the tracking sensor that Alien fans will be familiar with. The environments are often dull, but industrial and claustrophobic, which is what you would expect from a game set in the Alien universe. The nature of the narrow hallways, or flooded rooms, or caverns, allows for some cool emergent gameplay moments, that really captures the essence of the action we’ve seen throughout the Alien franchise. 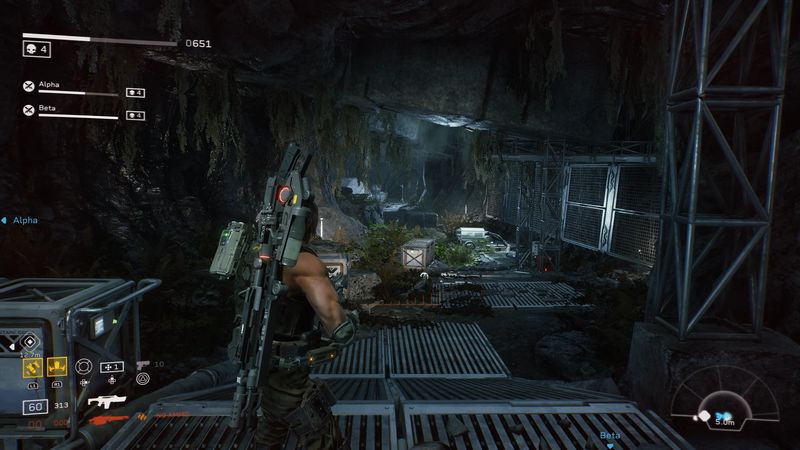 The sound design is very accurate and faithful to the source material. Developer, Cold Iron Studios have absolute nailed the sound effects. Hearing the pulse rifle blast through Xenomorphs as they let out that infamous screech, sounds like it’s taken from a scene that’s right out of James Cameron‘s Sci-Fi classic. The overall sound design during gameplay, is single-handedly one of my favourite aspects of Aliens: Fireteam Elite, as it really lends itself well to how good the weapons feel.

Austin Wintory’s score is just fantastic and equally as faithful. It gently operates in the background, and ratchets it up exactly when it’s needed and it greatly succeeds in setting the tone. However, the audio is lacking when it comes to lip sync for the characters. When they are talking, their lips aren’t moving. At first this can be jarring, especially as much of the plot is delivered by the NPC’s aboard a hub area, known as The Endeavor.

When it comes to narrative, there’s not much to say. Outside the campaign storyline, which is serviceable at best, you can find intel during missions. This intel will point you to an NPC, who will then expand on the lore. This might interest Alien fans, but not necessarily engaging enough otherwise for a more casual audience. Some of the dialogue can be unintentionally comedic too. 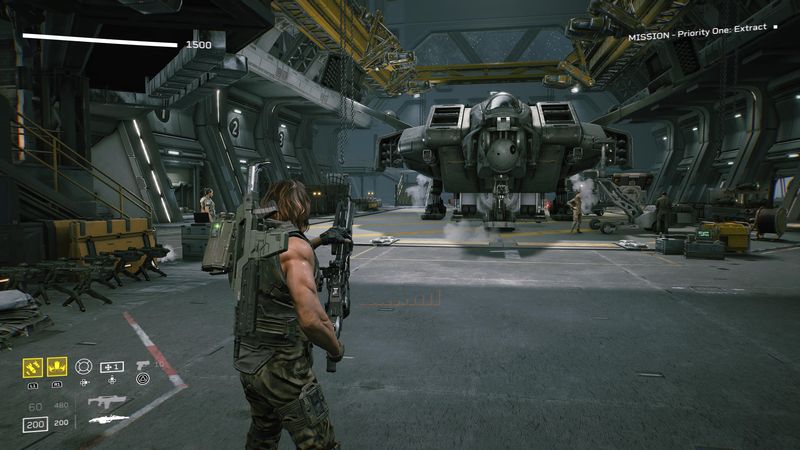 Not Bad For A Human

Aliens: Fireteam Elite isn’t without its shortcomings. The lack of a checkpoint system, and a few bugs certainly left me frustrated. Relying on an AI squad, as I scramble for an exit at the end of the mission wasn’t exactly a fun experience either. Having said that, the moment to moment gameplay, combined with the faithful audio design, successfully captures the essence of those actions scenes in Aliens, and that is what keeps me coming back. Cold Iron Studio’s appreciation for the franchise shows, and there is a lot of references to Alien lore that fans will appreciate.

Overall, Aliens: Fireteam Elite is at its best when you find your favourite loadout, and experience what the gameplay has to offer. The game is best experienced with friends, so you can experiment with different classes and loadouts to tackle the waves of Xenomorphs together. If you can find a squad or co-op partner to play this game with, you’re going to have a good time. If I’m being honest, I wasn’t expecting much going into Aliens: Fireteam Elite, but I’ve got to say, I was pleasantly surprised.

Aliens: Fireteam Elite is now available on PS5 and PS4.

Whilst Aliens: Fireteam Elite is lacking in some areas, and is not without its frustrations, it is a solid third-person survival shooter. The story won't pull you in, but the core gameplay is satisfying, fun, and addictive and that is what will ultimately keep you coming back. There is something here for fans of third-person shooters and Alien fans alike.