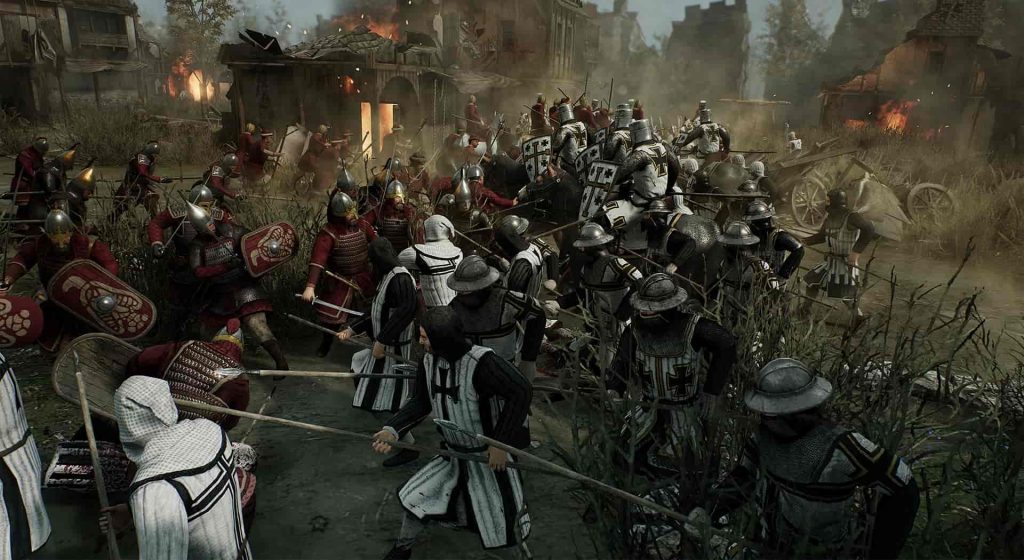 A quick scan across the relatively meager selection of strategy titles for the PS4 reveals something of an odd truth – none of them actually deal with the Viking invasion, the Anglo-Saxon wars or the Slavic conflict in any shape or form. In fact, there is a massive gaping, historical hole in the genre on PS4 that no game has been able to fill – until Ancestors Legacy, that is.

Originally released on PC, Ancestors Legacy makes the trek to PS4 in just over a year and change. Pointedly, the fifteen month interim has been seemingly well spent as developer Destructive Creations has used the time to nip and tuck Ancestors Legacy in all the right ways for its console debut.

Ancestors Legacy most obvious hook is a compelling one. Boasting a multi-faceted campaign that allows players to tackle historical narratives from the perspectives of Viking, Anglo-Saxon, German, or Slavic forces, Ancestors Legacy should pique the interest of historians and armchair generals everywhere given the wide variety of historical conflicts that it has on offer.

A world away from the boorish and flair bereft story campaigns often seen in other strategy games, each campaign in Ancestors Legacy is linked together by a plot thread that has players controlling a familiar set of characters as they push through the story. From marooned Viking warlords to desperate Germanic fighters, Ancestors Legacy does a grand job of enveloping the player in its numerous conflicts, with each chapter being showcased in dramatic fashion through a bevy of in-game cut-scenes and expectedly gruff spoken dialogue.

As to the structure of the campaign offering itself, clearly a lot of thought has gone into how to present an engaging story based mode that appeals to both genre newcomers and veterans alike. The majority of the first campaign for example is effectively a string of tutorials, yet the almost seamless fashion in which these mechanics are introduced to the player alongside the story beats, makes these early missions feel like proper battles all the same and not at all like the desperately dull hand-holding exercises that they might otherwise have been in lesser fare.

Once into the campaign properly, a welcome revelation comes in structure that each mission provides. Varying in length from 30 minutes to a couple of hours, each mission is eminently digestible, with goal orientated gameplay making each easy to follow along with and much more refreshing than just ‘kill the other side’ in the quickest possible fashion.

Indeed, the various tasks that you’ll be set make sense in both historical and mechanical contexts too. As the Vikings for example, much of the campaign is spent fortifying your ranks and infrastructure, burning the villages of your British foes and subjugating their infrastructure to your own ends – an act which will then allow you to stage a much more comprehensive and robust assault further down the line.

When it comes to the actual act of war itself, developer Destructive Creations has provided abundant depth and sophistication here too. Unit types can triumph or fail against each other in a rock paper scissors style system where shield bearing warriors can defeat pike-men, pike-men work well against cavalry and cavalry are exceeding capable at destroying other types of foot soldiers and so on.

Making things more complicated is the terrain and the various types of battlefield stratagems that you can enact to get the job done. While one unit might be inherently stronger against another, it’s all for naught if they happen to be in the wrong position on the battlefield – a charge into the flank of shielded warriors from a unit of pike-men will produce devastating results regardless of their inherent strengths and weaknesses in a head on scrap. Equally, other types of units must be used effectively too.

Archers, for example, should always be kept at the back of any type of attacking force, allowing them to torment foes at a distance with a shower of appropriately deadly shafts. Equally, the medieval equivalent of ‘danger close’ certainly proves to be a factor here too as friendly fire from your own archers can happen all too frequently if you’re not on the ball.

As vital as being able to properly leverage the numerous types of unit on the battlefield are, so too is having an appreciation of the environment itself and figuring it into your battle strategy at large. For instance, it’s entirely possible for a smaller force to keep a larger one at bay by forcing the bigger army into a choke-point (such as a narrow bridge, for example) where you force them to fight you one-on-one, effectively negating their numbers advantage while a carefully placed unit of archers rain death down upon the frustrated and built-up enemy force in turn.

Ancestors Legacy Has Depth For The Ages

Beyond the numerous units that you direct around the map, Ancestors Legacy also encourages players to build their own base and infrastructure too. Villagers and peasants are at the core of any base building enterprise, as the more folk you have, the more buildings you can fashion. The caveats here are that you must first build somewhere for your villagers to live and each structure requires a smattering of different materials (wood, metal, minerals and so on) in order to be hammered into existence.

There’s ample depth to the base building side of things too because the more complex buildings, such as an archery range for example, can only be constructed once the tech level of your army has been upgraded – something which can only be accomplished by obtaining (or pillaging) the required resources from the environment, or from the enemy. The actual base building in Ancestors Legacy is streamlined (you don’t even get to choose where to place your buildings – placement is automatic), leaving you to concentrate on troop movements and battlefield strategies rather than getting mired in the nitty and often tedious gritty of infrastructure micromanagement.

Then there is the baked in progression system. Each unit you see, can not only be improved with researched gear and equipment, but they can also be levelled and made more deadly by the their triumphs and victories in combat. Neatly, this adds another layer of tactical consideration as well, since while your more experienced units will be those who have spent the longest in the vanguard of your force, you also might want shield them from unnecessary harm in order to save them for more crucial conflicts that have higher stakes.

More than just mechanically tactical flourishes, when you actually pull off a complex, multi-faceted tactical gambit, the feeling of deep satisfaction is palpable to say the least. Speaking of palpable, Ancestors Legacy is easily one of the most visceral RTS titles out there – with enemies being cut into bloody messes, frequent dismemberments, blood curdling screams when folk are set on fire and a field of ashen husks that lay in the wake of a conquering army. This is violent stuff, make no mistake.

Effortlessly also, players can manipulate the camera – zooming in for an intimate look at the carnage as sophisticated combat animations show troops striking, defending, countering and evading one another with skill, rather than the whole thing just looking like one massive scrum where the character models appear to be turbo humping one another into submission.

Pleasingly, the campaign is absolutely massive too. With four substantial stories split across a total of 40 missions, you’re looking at somewhere north of 50 hours of gameplay just in the single-player campaign alone (and that’s assuming you’re a competent warmonger), Ancestors Legacy is clearly able to provide you with ample bang for your buck.

Away from the main story campaign, Ancestors Legacy also packs in a suitably meaty and surprisingly customisable Skirmish mode, while the competitive online multiplayer battles also prove to be compelling, albeit a little uneven. With two main modes, Annihilation and Dominion, it’s the latter that proves to be the most fun as Annihilation simply requires one side to totally wipe out the other and can often result in one side cheesing the other by simply having a super-fast single unit on the map and holding out as long as possible. Yeah, not fun.

Happily, Dominion is leagues better. Basically the objective here is to earn points for every village on the map that you capture, but because there are only a small amount of these on any given map, the game soon transitions to a fast paced affair that has more in common with a classic tug of war as villages change hands from one side to another in quick fashion. It’s definitely a lot of fun and provides many, many hours of additional entertainment long after the credits have rolled on the main campaign. Both modes also support PvE variations too – allowing players to pit themselves against the CPU in these scenarios.

It’s fair to say that one of the biggest challenges that a developer faces when they bring an RTS like Ancestors Legacy to console, is to somehow account for the much fewer command inputs that a joypad controller provides in comparison to the traditional PC combo of mouse and keyboard. Well thankfully, porting studio Slipgate Ironworks have done brilliantly here, making generous use of easily usable radials to deal with a range of commands simple to use to pull off at any time.

The controls though, while deftly streamlined and easy to use for the most part, aren’t quite as intuitive as they need to be at times, with choosing multiple units sometimes becoming a problem as you usually end up not selecting all the units you want and only sending half your soldiers into battle. Likewise, no keyboard or mouse support present at this stage either, but both issues seem like they could be resolved by a future update.

Elsewhere, Ancestors Legacy gives a grand account of itself on PS4, with Slipgate Ironworks and Destructive Creations bringing an RTS to life on the console that has some highly attractive environments and detailed character models, while PS4 Pro owners can choose from three different visual settings – though oddly, none of them favour performance but merely allow the player to switch between a standard 1080p mode at 30 fps, a 1080p mode with enhanced visuals at 30 fps and finally a 4K mode at 30 fps. Here’s hoping that a performance preset arrives in a future patch; not that the game especially needs it, mind you.

Though not perfect (porting an RTS to console is, lest we forget, a Herculean task at the best of times), Slipgate Ironworks together wth original developer Destructive Creations have wrought some kind of miracle here, conjuring an RTS that takes in a whole bunch of engrossing historical settings, is visually opulent and has enough longevity to keep even the most experienced armchair going into the year beyond.

Providing an evocative look back at some of history's most visceral pre-modern battles and conflicts, Ancestors Legacy is a superb PS4 RTS that fans of the genre shouldn't miss out on.