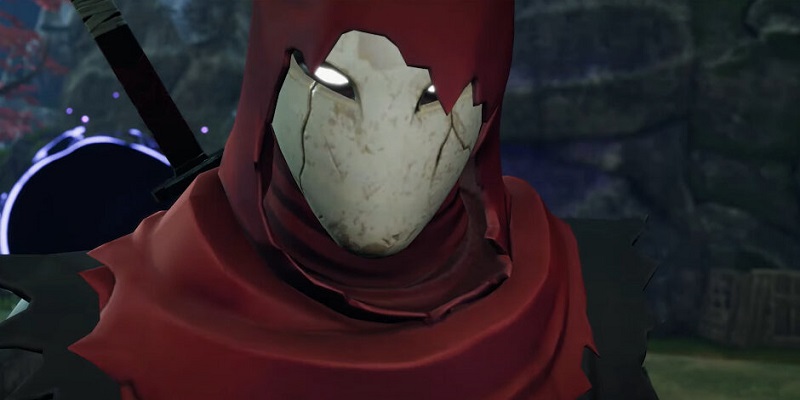 Aragami 2 Review (PS5) – I’m convinced that the most difficult kind of review to write isn’t about a game you hate, or a game you love, but a game you really just don’t know what to think about, and Aragami 2 is that game for me. Other than annoyed, with brief moments of enjoyment, like having someone throw fries at your face but you still appreciate the odd one that makes it into your mouth – I don’t know how to feel about it.

Developer Lince Works presents a good, basic foundation for stealth mechanics and gameplay in Aragami 2 but it’s restrained from ever really branching further due to constant bugs and performance issues, a noticeable lack of polish across departments and poor pacing which can make what is an otherwise interesting narrative feel like a trip to the salt mines.

Something Tells Me I’ve Been Here Before 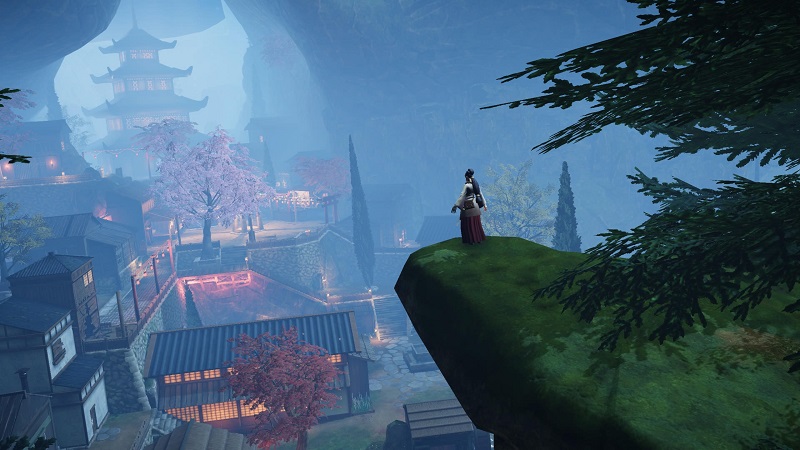 To make things more clear I’m a big fan of stealth games, of stealth in games, of creating stealthy moments in games where there isn’t a lot of opportunity for it. Suffice it to say, I was pre-conditioned to enjoy Aragami 2 because there seems to be so few brand new games in the stealth genre releasing, it’s nice to get something. But I wasn’t pre-conditioned to like playing the monotony that is the campaign.

The narrative itself is actually interesting, with the story at its core being about a cursed people doing their best to survive, with the hope of restoring all their souls weighing on you. The stakes works well to add a deeper meaning to each triumph with thoughts of each villager back home, counting on you to help them become whole again.

The story is broken into nine chapters across 50 levels. The problem is, you only play through the same few maps again and again throughout the game, and each return to the same array of ledges, tall grass and chest high walls among a sprawling square in front of a pagoda began to feel so similar it was driving me insane.

Part of this is the level design. Areas didn’t really feel distinct either, with a lack of major identifying landmarks hampering any chance to make these locales seem anything close to memorable. Everywhere felt like the same across what looks to be on the map a large country, and it served to make every level feel more just like part of a continuous blur. It was almost heart-breaking because like I said, I did like the narrative and there were even some NPCs that I thought were quite charming, but even with that if I wasn’t reviewing it, I wouldn’t have made it to the credits.

You Simply Adopted The Dark, I Was Molded By It 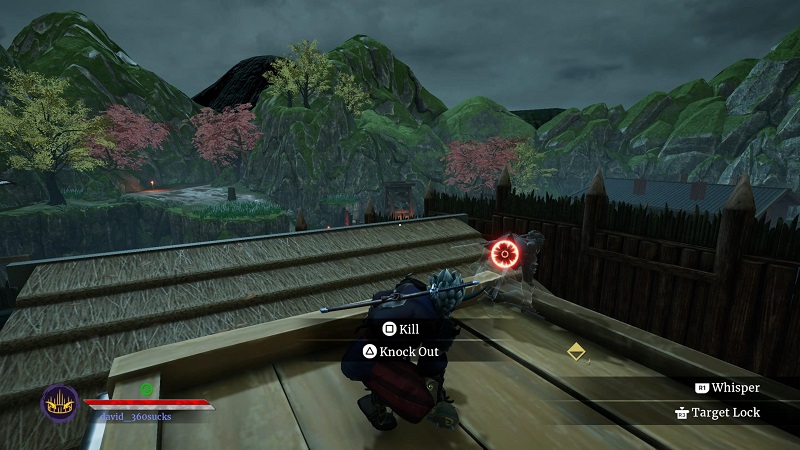 Darkness and shadows go with every stealth game, since the coolest and most classic way of sneaking up on an enemy can simply be hiding in a creatively dark spot. Your connection to shadows runs deeper in Aragami 2, since you literally are shadow and can move through it. Your shadow leap technique and shadow roll are invaluable to the game, especially when combined with the ability to turn invisible for a short period immediately after performing either action. It makes for a very fun mechanic to use throughout and allows for especially creative tactics since the invisibility gives you the freedom to move throughout more of the playing area rather than sticking to bushes and dark spots.

You upgrade your skills via checkpoints, and a new level of skills will unlock automatically as you progress in the story. It’s evident that there’s enough skills that you’re unlikely to earn all of them in a single playthrough, which does add a flavour of perfecting your build if you only intend to play the game once. But ultimately the biggest deterrent to unlocking everything in the skill tree is the fact that you unlock skill points fairly slowly, and many of the abilities you can get through the tree cost two points at a time, rather than one to unlock it and one to upgrade.

The abilities you can unlock are definitely cool, and can be helpful in combat, but I never felt drawn to use anything other than the Whisper ability, because the actual stealth gameplay to be found within Aragami 2 is anything but complex. The aforementioned ability to be invisible for a few seconds immediately after performing a shadow leap or roll was truly the only upgrade I actually needed in the game, and it just never sits right with me that so much of a game’s mechanics can be ignored so easily. I understand the point is to present the player with a myriad of options and allow them to be creative, but there’s truly no incentive to use any support items or special attacks and skills other than your creativity.

It’s partly why the levels begin to feel so monotonous. You barely need to do anything different from the last time you were there, despite being further into the story and after a certain point, facing off against enemies who are supposed to be more difficult than the ones at the beginning of the game. The AI is a whole other discussion entirely however, which we’ll get to later. 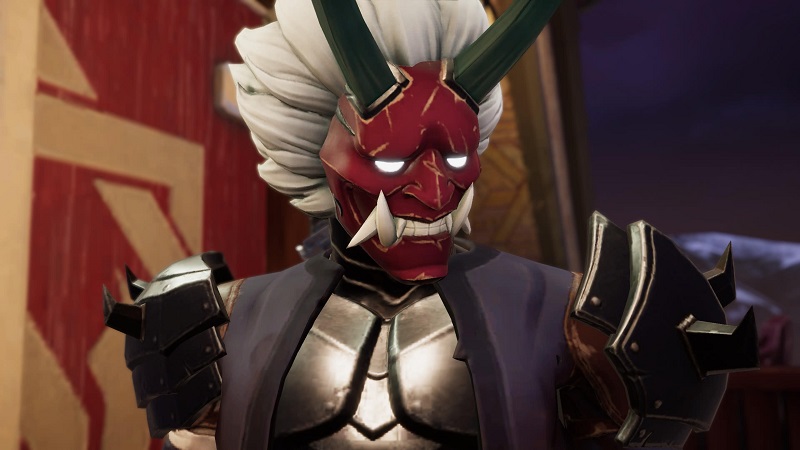 To give another example, while stealth focused games like Hitman also offer a wide variety of options the player is meant to be creative with, developer IO Interactive provides specific challenges and puzzles which push you to use the items and mechanics they developed for the game in creative ways, then opens the door for you to use them in an even more unique way across the game. Developer Lince Works leaves it entirely up to you, and it feels like I need to use these items I personally don’t think I need to justify them being there, and it shouldn’t be up to the player to justify a mechanics existence.

What I didn’t use in the game might not have even been there at all, out of 20 support items I kept the same four with me the whole game. It felt like I should want to know what the other 16 do, but knocking someone out from a bush and leaving them there still works. At the end of the day it’s nice that the variety is there for those who want it, but it’s more variety just for the sake of it, rather than providing items that can change the gameplay in surprising and effective ways. I’d have even preferred a smaller number of very focused items, since they would add depth to what’s an otherwise shallow game.

Let’s Talk About The Bug Elephant In The Room 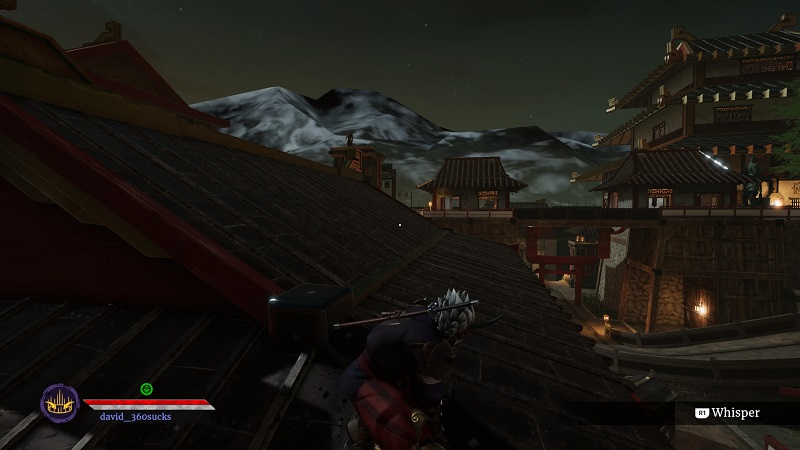 Unfortunately though, the level design and lack of execution between game design and its mechanics are not the only issues to contend with in Aragami 2, because your biggest problem will likely be the bugs and performance issues. My entire playthrough was plagued with screen tearing, camera issues, stuttering, and weird buggy happenings like assassinating someone while I stand above them (somehow) as I try to complete an aerial strike.

To be fair, almost none of the issues I had were game breaking in the sense that I couldn’t play it or the game would crash, but in every session I had with this game it felt like playing a janky PS2 game that mostly works but definitely isn’t perfect. I don’t think that’s the worst thing in the world, because it was still possible to have a lot of fun in those games, but it’s not great when a game with a native PS5 version releasing in 2021 is comparable to games released on a console now three generations ago.

So the bugs don’t completely stop Aragami 2 from being fun, at least in some moments. The stealth combat is solid enough that there’s a basic foundation to play with but it’s nothing really more than that. So you can find moments of fun, especially in the early hours by pulling off cool and creative kills or by finding a way to move through a level undetected and without killing anyone. Those early hours will still be plagued by performance issues of course, but just make sure not to play for very long, and the bugs probably won’t get on your nerves.

The AI however as I said before is a different story. Their simplicity and downright stupidity may be somewhat purposeful to provide an overpowered experience but they’re so poorly programmed it just feels unfair. They’re only ever a challenge if multiple of them swarm you when you’re caught, and even then you can still likely find a way to run and hide to strike again when they’re not looking.

If you are caught though, and choose to fight, then you’ve more than likely made your own bed since the combat in the game is slow and the timing for parries and attacks have a latency to them that makes the idea of fighting your way out after getting caught so deplorable you’d just rather avoid it. I don’t believe at all that a developer would purposely make one aspect of the game worse so players focus on something else, but the melee combat between you and your enemies is a poor, frustrating mess that almost makes you feel it was intended to be that way so you focus on being stealthy.

You Can’t Hide From Bad Pacing, Or A Mirror 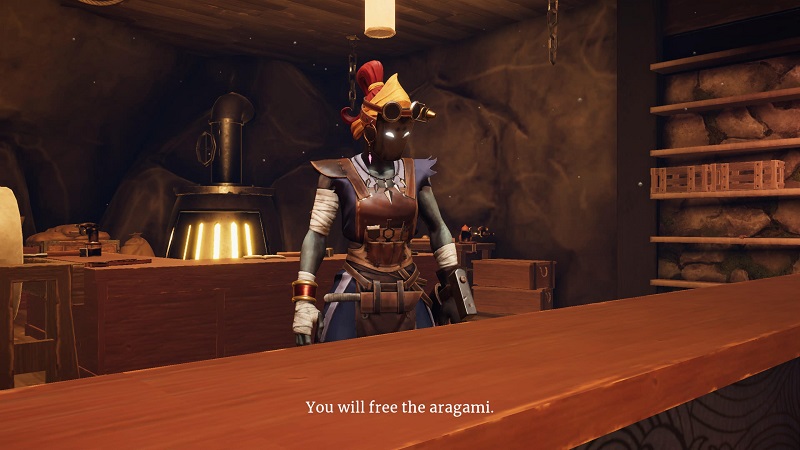 The 50 levels you play across nine chapters begin to feel like the same thing again and again very quickly, and like I said before, that’s in large part due to the level design, but it might not feel like such a chore if the game wasn’t just so poorly paced. The early chapters drag on for far too long and many of these levels feel like nothing more than padding on a runtime that is hours longer than it should be.

On top of all the issues I’ve already mentioned with Aragami 2 it makes it all the more unfortunate that when it comes to the visuals and the overall design of the game, well, those PS2 feelings I mentioned earlier don’t just come from the gameplay, but also from the visuals throughout the game. It just doesn’t feel good to play something with visuals that feel comparable to a console that didn’t even run games anywhere close to 1080p.

Aragami 2’s issues standout the more time you spend with it and it makes for an ever frustrating experience I dreaded returning to every time I sat down to play. The simple truth is that there’s an okay game at its foundation with an intriguing story but its issues across level design, pacing, gameplay mechanics, constant bugs and performance issues drag it down every minute you spend with it.

Aragami 2 could be a good stealth game, with a good foundation of stealth gameplay and even an intriguing story, but it is plagued by constant bugs, performance issues, poor level design, pacing, rough implementation of gameplay mechanics and a visual style that only further serves to make its flaws even more evident then they already are.