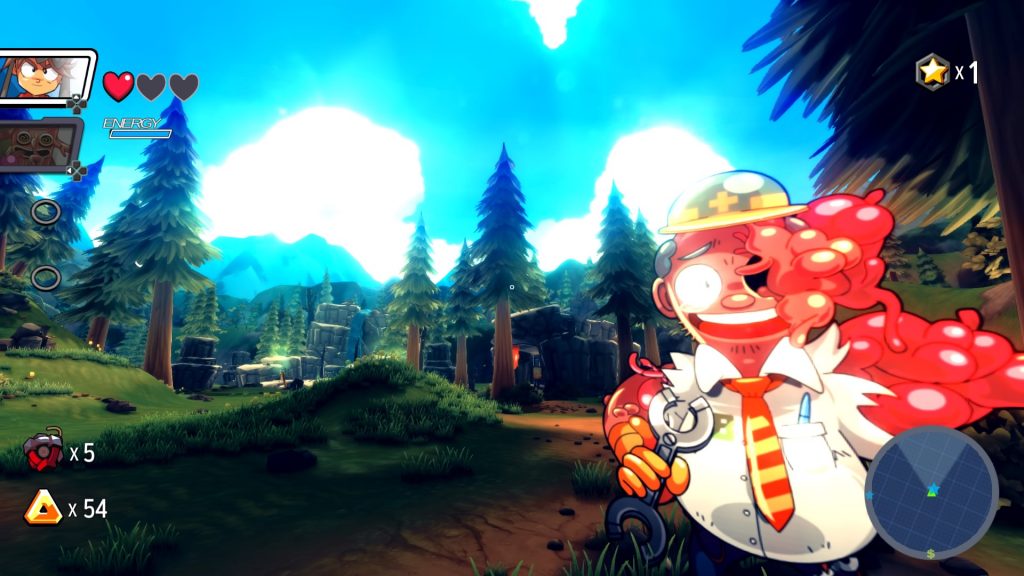 Good news everyone! There is evidence of some mysterious activity coming from a new tunnel which has appeared in the basement, your parents still haven’t returned from their secret work assignment and it’s up to you to find out what’s going on!

Billed as a “feel-good First Person Shooter”, AWAY Journey to the Unexpected is a colourful action adventure from French duo Aurélien Regard (The Next Penelope) and Rayman level designer Jim Gennisson.

Despite its French origins, the first thing that hits you is the arresting opening anime sequence complete with upbeat J-pop musical stylings which is so authentic, you’d be forgiven thinking it’s based on a Japanese animated series.

Once the game begins, the anime visuals of the intro are replaced by shiny 3D cartoon environments inhabited with excitable colourful characters whose depth deficiencies recall Parappa the Rapper. Your adventure starts in your cosy space-themed bedroom and continues with some exploration of your vibrantly coloured household where you meet your pets and grandparents. Soon you find the aforementioned basement and the tunnel entrance which is sporting a ‘Labiworks Group – Danger’ sign leading to the first area, Forest Plains.

After despatching a pair of tunnel critters with your wooden stick, you arrive in a beautiful summery wooded setting complete with tweeting birds, butterflies and fluffy white clouds. Soon enough you come across the first of eight NPCs who will aid you in solving the unfolding mystery of who Labiworks are and what on earth they are up to. After picking up one of the revolving Friendship Cubes found in the outdoor levels, you can then recruit one of your new team mates who also reward you with a star, more of which later.

YOU’VE GOT A FIEND

Up to three of the eccentric characters you come across during the game can be chosen as playable characters at one time, each of them having their own particular special weapon or power. Switching between characters also changes how you see the world, be it through a cracked pair of glasses, some wooden eyeballs or severely blood-shot peepers to name three.

Your new friends aren’t on board for that long however, as their limited energy levels deplete each time you attack one of the many strange beasts inhabiting the caves or areas. After visiting three caves and activating the switches within, the exit gate opens to allow you into the boss level.

After more alien swatting and some simple platforming sections through the underground mines, you will find a key to enter the boss room and after a successful scuffle with a giant spider or a critter-spewing robot, you emerge with a selection of goodies to further your quest. Collectables include fireworks (grenades), hearts (health) and gold nuggets which are used to buy health/cubes/fireworks at a shop run by a frenetic bouncing DJ.

As you progress and add new members to your roster, your star level increases unlocking new rooms in your house and new outdoor levels to explore. Each time you die, a screen displays your XP bar as it increases to reflect your accumulated kudos, revealing bonus powers and keys which let you to enter the boss levels more easily. You are then returned to your bedroom and you begin again, albeit with your levelled up powers.

During the game, you’ll frequent the three main outdoor play areas (and the three loosely randomised boss levels) numerous times in your attempt to level up and reach the gleefully nonsensical finale, which can only be reached once all eight of the NPCs have helped you out at least once. Fortunately the repetition is tempered by the playful and genial visual style which is Away’s strongest suit.

As well as the smooth framerate and speedy movement (reminiscent of the classic PS2 title Timesplitters), the bright open levels teem with graphical details and effects which are bewitching to behold. The crystalline sound effects twinkle and chirp over the top of the atmospheric music, although the creature and fight effects are somewhat simplistic but do the job nonetheless.

NOT ALL SMILES AND SUNSHINE

Notable downsides on offer include the obtuse game progression where a long battle through the levels to unlock a new character is wasted when you make the wrong dialogue choice, locking you out and forcing you to do it all again. And again. Save points? Oh we’ll hide them in the après-death levelling up screen leaving the player unsure whether they have to start afresh. Unlocked the Fireworks weapon? We’ll let you find out which button to use… It’s also a bit of a shame the basic structure of the game involves so much repetition in order to progress, but without drip-feeding much in the way of new elements along the way to spice things up.

These are relatively minor niggles though, as your time in the crazy cartoon world of Away is a psychedelic space milkshake of escapist fun. There’s a good few hours of story here but once you’ve solved the mystery and hoovered up the easy trophy list, you’ve seen just about everything the game has to offer. This is reflected in the price though, so grab a copy of this indie action/adventure and play through it with or without your kids for some stick wielding fun.

AWAY Journey to the Unexpected