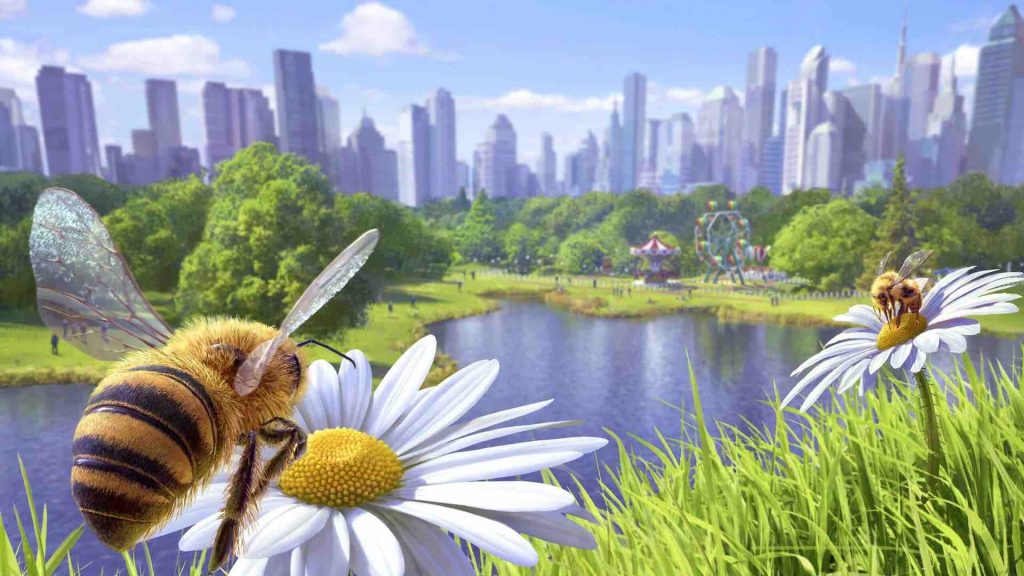 It’s easy to poke fun at ‘Simulator’ games – thanks in no small part to Goat Simulator – a title that basically appended a hilariously broken physics engine to a, well, a game about goats. As a direct result, it’s easy to see why such games might not be taken seriously should they carry the ‘Simulator’ tag. Bee Simulator is different, not least because it takes an earnest run at an established genre but also because it crafts a legitimately educational offering for young and old in the process.

As a new member of the hive, Bee Simulator is a third-person, open-world yarn that has you safeguarding your habitat by collecting pollen to replenish honey supplies and completing quests to ensure the security of the Queen, all the while learning a whole bunch of facts and information about our buzzing, life-enabling friends.

A beautiful and wholesome open world adventure that is great for introducing younger folk to the genre, Bee Simulator is both resolutely simplistic and easily accessible in nature. Tasked with buzzing around an open world that is reminiscent of New York’s Central Park, Bee Simulator has you flying around the various grasslands, trees and other rural areas as you scour the environment for pollen from various flowers, filling up your pollen reserves until they top out, before returning home to drop off your spoils.

In more ways than one, Bee Simulator seeks to educate. The flowers that you’ll take precious pollen from are graded by their rarity, with standard growths appearing as white when viewed through Bee Simulator’s, first-person sense-based visual spectrum, green as uncommon, red as epic and so on – neatly paralleling the manner in which more sophisticated games often grade their tiers of loot.

Finding your way around the world is a doddle – a handy and easy to read UI keeps you orientated, while super obvious signposting and waypoints always ensure you know what to do and where to go next; further cementing Bee Simulator’s bonafides when it comes to appealing to a younger, and less experienced audience. In addition, a handy fast travel function allows you to revisit places you have previously been, further streamlining the experience a great deal.

Where the simplicity goes a little bit too far is in the additional side quests and activities that help to fatten out the world of Bee Simulator. With just five main varieties of challenges – race, dance, fight, sting the bully and gathering pollen, it’s certainly fair to say that activities outside the 3-4 hour main story, soon become somewhat tiresome and repetitive after a while.

The activities themselves are very shallow too from a design perspective, again once more reinforcing the notion that Bee Simulator is crafted for the younger folks among us. Combat activities for example, are basically rhythm type affairs where you must press the correct button at the right time, with the victor effectively nose-butt their foes into submission. Elsewhere, dancing, like combat, is accomplished through a similar mechanism, the difference being that rather than having the inputs made obvious you need to mimic the motion of the other bee (though it’s supremely easy to tell which dance moves pertain to which direction).

Faring much better are the side quests, which though mostly end up being of fetch variety, nonetheless still prove to be fairly entertaining. For example, in one side-quest you find a lost little squirrel who is distressed and alone and you so you must fly around and find some find his mother, the result being a hugely adorable scene that underscores the wholesomeness of Bee Simulator.

Though the numerous side activities can prove frustrating no-thrills, they do dish out substantial amounts of knowledge points and it’s here that we come full circle back to Bee Simulator’s pursuit of education. Every aspect of the game is stuffed with factoids and knowledge – from the loading screens to the in-game text, Bee Simulator is very much an effort that is built to educate as much as it is to entertain, as it touches on key real-life issues such as bee conservation, their natural habitat and more besides.

Where the knowledge points come into play here, is in how they can be used to unlock animal statues, fact books 3D models and new skins for your bee – not only providing incentive to complete these challenges, but also explore the environment too. You see, it’s not enough to just have the sufficient number of knowledge points, you also need to encounter these various creatures, plants and other denizens of nature out in the wild, a fact that works to Bee Simulator’s advantage as this also provides additional incentive to explore and drink in the game world.

Luckily, flying around as a bee is quite the rush and is depicted with aplomb, as sensitive (though not overly so) controls allow you to bank, swoop and soar around the world with the appropriate grace and ease one would expect from Mother Nature’s most determined little worker, while hazards such as gusts of wind and spiderwebs must also be accounted for on the fly, too.

As well as the standard flying controls one might expect, your little bee also makes use of a turbo boost of sorts called ‘Beetro’, that provides you with a sustained rush of speed. The thing is however, Beetro is not infinite, and can only be replenished by completing challenges, quests, collecting Beetro power-ups during races or by landing on and feasting upon sugary treats, such as dislodged fruit or sweets and cakes that can often be found around picnics and shops.

Beyond the main game, split-screen co-op and competitive game modes are offered too, extending the game’s appeal further still and allowing parents and older relatives to play with their younger siblings who might be trying an open world game like this for the first time. Audiovisually, Bee Simulator acquits itself fairly well also, with a super smooth framerate for the most part and decent texture detail that only really comes unstuck when you get right up close, while the soothing orchestral soundtrack and enthusiastic (though a touch wooden) voice acting rounds out the package nicely.

Though simplistic, Bee Simulator is nonetheless a charming introduction to open-world games, and one that surely seeks to educate as much as it does to entertain. If you’re getting this one for the kids, feel free to throw an extra point or a point and a half onto the score below.

Bee Simulator releases for PS4, Xbox One and Nintendo Switch on November 14, 2019. A PC version will follow later in 2020.

Though simplistic and lacking in some variety, Bee Simulator is a great introduction to open-world games that everybody can enjoy and is also a towering celebration of Mother Nature's most vital workforce.