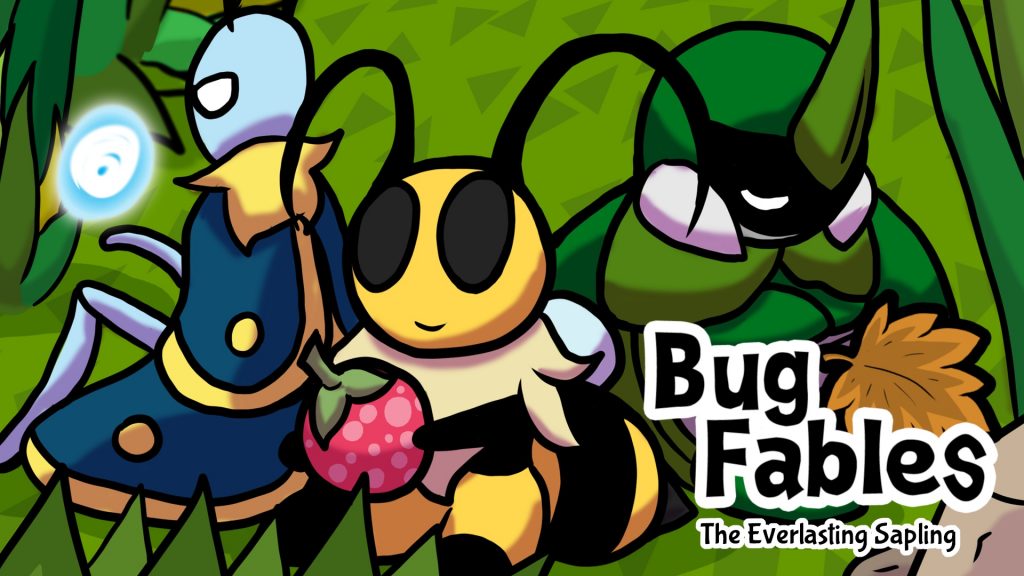 I had recently seen a few social media accounts posting about an upcoming PlayStation 4 game, it looked like an old-school flash game with 2D art that flipped as the characters changed direction, I thought it looked quaint and it heavily reminded me of the brilliant Paper Mario games. Not too long after I was offered a chance to review said title, which turned out to be called Bug Fables: The Everlasting Sapling by Moonsprout Games.

Full Of Bugs But Not The Bad Ones.

While this title is called Bug Fables, I would hardly call the tale you embark on a fable. Instead, its a quite generic tale of a team of adventurers who are trying to prove themselves. Your goal is to find the Everlasting Sapling, an artefact that grants immortality and hopefully, on the way, you will help bug-kind and rid Bugaria of the evil forces inhabiting it. It’s generic yes, but is it fun? Well, yes. A tale does not have to be unique, new or different to be enjoyable and it is the gameplay that truly shines here.

On the whole Bug Fables is a turn-based RPG with a sprinkling of puzzle-solving and platforming. Does it work together well though? I am pleased to say that it really does. Your team of three characters, Vi, Kabbu, and Leif are all different and have their own strengths when tackling the various genres that make up this colourful, lighthearted RPG. They all act differently in battle and during platforming; therefore, how you utilize their skills is paramount and you will need to use them in unison to progress.

I was not expecting that much platforming and puzzle work in Bug Fables but I really appreciated it. Pressing switches, rotating platforms and finding keys separate the turn-based battles and it certainly adds a nice flavour to the overall texture of the game. Most players will find something they like here, whether it is the platforming, solving easy-going puzzles or the amazingly novel battle system. I am sure this game will ‘bug’ very few people during its 25-hour main campaign.

A Battle System With A Buzz

The part of Bug Fables I enjoyed the most was its unique battle system. I am not a massive fan of turn-based RPG battle systems. I don’t mind them don’t get me wrong, I just prefer real-time systems. What this game does and does very cleverly is that the turn-based battle system still requires you to be focused and paying attention at all times. For each command you pick, for each attack you do, a mini-game will determine the strength of your attack. It’s brilliant and unlike anything I have played before.

The battle mini-games range from holding a button and releasing it at the right time to pressing buttons in the right order. Every new technique you unlock comes with a new mini-game to learn. This does sometimes lead to some battle mishaps as you press the wrong button or forget exactly what you must do for each attack but it does add to the charm of every battle. Boss attacks also come with some minigames and you mastering your timing and each technique will pay dividends in your many conflicts.

It is not just your attacks that are affected by your button presses. If you press a button as the enemy attacks you can reduce and even sometimes completely negate the damage they do. It takes what can sometimes be plod-along turn-based battles and turns them into an involved, fun and skill-based set of mini-games. I love it. Along with this unique trait, everything you associate with turn-based battle systems is also present. Turn orders, team placement and surprising enemies all affect battles, as do items and special abilities you find and unlock.

Bug Fables art-style makes the game look like a flash title from 20 years ago. While that is not necessarily a bad thing, I was not massively into the art style. I did not hate it, I have personally played a lot of flash-based games over the years and I suppose I have just seen enough of it. I did like the paper-style animations though, I liked the way buildings fold open and characters flip in 2D when changing direction. The game is bright, crisp and totally owns the style it is sporting.

Soundwise, Bug Fables has a cheery and breezy soundtrack that perfectly compliments the graphics and the nature of the game. The game is bright, colourful and easy-going, it is only fitting to have a soundtrack that matches. There is no voice work to speak of as all the characters speak that weird tonal-mumbling language that a lot of games go for these days. I don’t personally mind that but some will, it means a lot of reading and It can sometimes slow the gameplay flow down.

Overall I really enjoyed my time with Bug Fables. I may even return at some point to mop up hidden collectables and trophies. For now, I am happy with what I played. The normally slow-going turn-based battles have been spiced up with small minigames which means you cannot drift off and must always be attentive. While I am not a massive fan of the art-style, it fits the music and the style of the game to create a breezy, fun and lighthearted experience I think most players will like.

Bug Fables: The Everlasting Sapling is out now for PS4.

Bright, bold and colourful. Bug Fables: The Everlasting Sapling adds another dimension to turn-based battles and brings platforming, puzzles and heart to a worthwhile adventure. The art-style was not to my taste but it fits the subject matter perfectly. There is a lot of game here for your money, especially if you want to see it all. Now bug off and get tucked into the game.