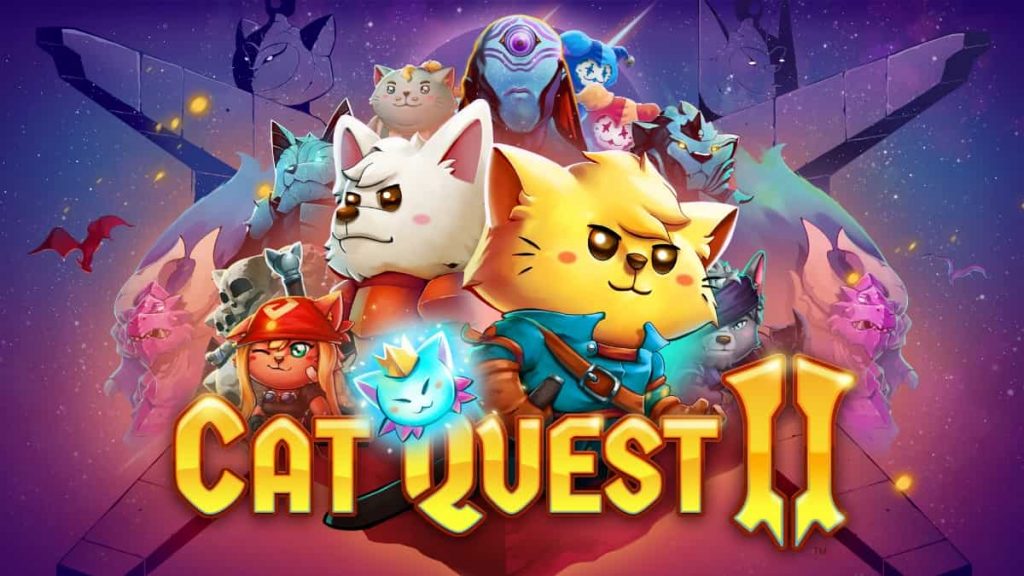 Back in 2017, I was surprisingly wowed by a small cutesy RPG starring a cat. Cat Quest came from nowhere and really peeled back all the fluff that bloats modern-day RPGs. What was left was funny, heart-warming and extremely beautiful. Fast forward two years and we now have Cat Quest II, it will not, however, have the surprise effect the first game benefitted from and players expectations will be high.

Developer The Gentle Bros Is Not Kitten Around

Story-wise, as with the first title, it’s no Tolkien. It is, however, light-hearted, fun and still quite funny. In Cat Quest II you are tasked with trying to re-assemble the Kingsblade, an ancient weapon that was shattered many years ago as it was deemed too powerful to wield. Since then a great, ancient evil has corrupted the two kings and it is your job to quell this resurgent foe and reunite the kingdoms of cat and dog. It’s all very cliché but I enjoyed the story and as with most of this game, it did make me smile, it didn’t not bog me down and just let me get on with it.

Straight from the off, you can see what the immediate changes to the Cat Quest formula are. Instead of just controlling a cat, you now control a canine and a feline simultaneously. It is clearly designed to play in local co-op but it equally works well in single-player. Just a quick button press changes your controllable hero and you can do so whenever you please. This alone is a great addition to the game, being able to play with friends or as I did, my children, adds a whole other dimension to this quirky little title.

Apart from the addition of co-op, there are a few other small changes to Cat Quest II. There are ranged weapons now, so you can equip lutes and wands to attack from afar. You can now upgrade your weapons and armour and the game includes all-new weapons, spells, enemies and a much larger map split into two continents. I love what has been done here, stray too far from what made the first game great and you will lose its magic but enough has been added to make it feel fresh again. Its everything that made the first game great with a few shiny new baubles attached.

Even with a fresh coat of paint, new bells, whistles and co-op, the core of what made the first game amazing is intact. It’s light, it’s breezy and in a world of over-complicated, boggy role-playing games its a breath of fresh air. I slid straight back into the formula without hesitation and it’s a game you could play it for a few hours, leave it for a few months and not be lost as to where you are. The beautiful simplicity is one of the main reasons why I love it – there are no sprawling menus to navigate, no over-elaborate game systems to get to grips with it’s all straightforward and sometimes you need that in a game.

Thankfully It Is Still Cat Quest

Anyone who has played the original Cat Quest knows what they will be up against here, simple quests, dungeon crawling and loot collecting. As with the first game though everything is uncomplicated, no-nonsense and is delightful. It’s the simple things that matter here and they make the experience an extremely enjoyable one. The controls are very straightforward, the magic systems, stat mechanics and levelling are that seamless and uncomplicated that they become almost unnoticeable and feel very natural.

What I really love about the addition of co-op and mage build characters is you can have one player as a warrior style and one as a mage, if you work together and give the right spells to the right player, combat becomes great fun. Especially when you factor in that some enemies are weak to magic and some to melee attacks. The combat is an area that has had quite a bit of improvement from the first game and it is truly better for it. Combat seems to be a tad more difficult and definitely makes you think a bit more than the first title did.

Graphically, I don’t know how it is possible but Cat Quest II seems sharper, brighter and cuter than the first game. The art style is to die for and the animations are superb. Everything from the way the two protagonists sway when they run to how they collapse when resting is animated to perfection. I cannot imagine you will see a cuter, brighter RPG this year. It’s the same story with the music and sound effects, they match the style and atmosphere of this cosy title perfectly. The soundtrack is brisk and sunny and the sound effects correspond beautifully.

I do not have a bad thing to say about Cat Quest II, its a near-perfect experience in my eyes. It’s light, it’s fluffy and the simple gameplay systems give you an experience that’s light and entertaining. Its presentation is nearly flawless. From the sound design to the graphics, from the dialogue to the gameplay, everything creates an amazingly simple but fun romp through a very well designed world. It is great for cleansing the palette between all the heavy triple-A games this year and is fun for all the family.

Cat Quest II is pure joy in video game format and I truly loved it. It did nothing but made me and my kids laugh, smile and co-operate. It’s not often you can say that about a video game and we all completely adored it. It’s not expensive, it will not take up much of your time and is enjoyable throughout. It has enough new things for returning players but has kept the nucleus of what made its predecessor so much fun. What are you waiting for? Go and unite the worlds of cat and dog.

Cat Quest II is available on the 24th October for PlayStation 4.

Cat Quest II has everything that made the first game so enjoyable. It has added co-op and a few new features that make it different enough for returning players to enjoy while maintaining its charm and great style. It's fun, simple and fun for everyone, while the art style and animations are to die for and a lot of players will fall in love with it. It's a breath of fresh air in the overcrowded role-playing game genre and is a delightful experience to savour.