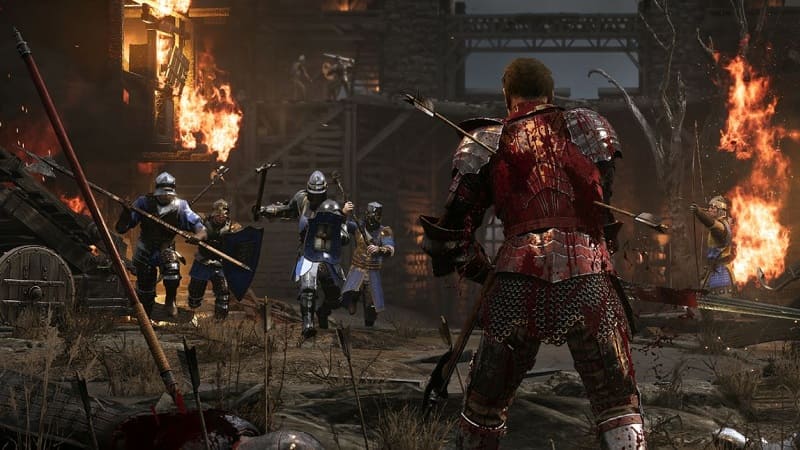 Chivalry 2 PS5 Review – I grip my sword with tightness. Over the edge at the castle, a defensive army of blue-clothed warriors, waiting for our push. There’s 32 of us, 32 of them, and all with bloodshed on our weaponry. There’s no way out of a fight, it’s inevitable. As we prepare our bows and we charge towards the frontline, something blocks out the sun. A knight on our team flew himself over the battlefield using a catapult, and I burst into laughter.

That’s what you don’t expect from such a skill-based Medieval multiplayer game, but something it leaves with you. Developed by Torn Banner Studios and published by Tripwire Interactive, Chivalry 2 is the sequel to the critical and financial success to Chivalry: Medieval Warfare which released back in 2012.

To The Death! And Missing An Arm…

Chivalry 2 prides itself on it’s chaotic nature more so than it’s nuanced combat system. Whilst there is the opportunity for some level of simulation to be enjoyed, most of my experience has been that of an almost murderous comedy rather than a serious multiplayer game. 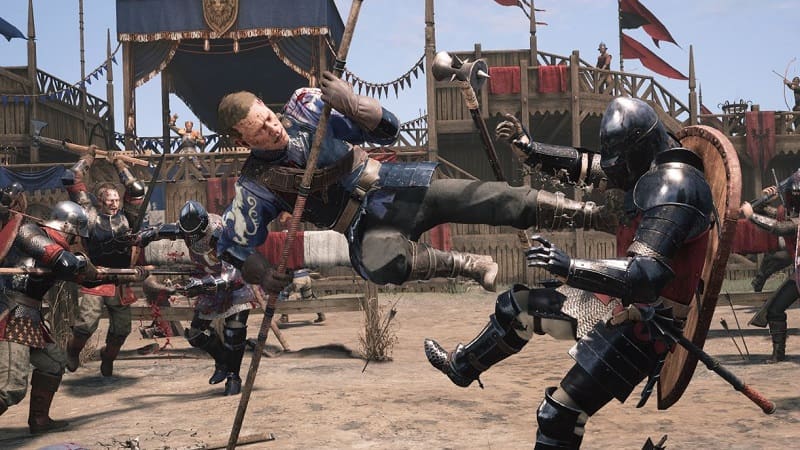 Let’s start with the gameplay; players are usually pitted in teams of 32 against another 32 players. Each map, whether it be the gorgeously dark and splendid Battle of Dark Forest or the simple yet awesome Tournament Grounds. Players are tasked with either objectives, such as destroying banners, pushing siege towers or defending, or a basic team deathmatch where teams are dwindled down to their last remaining troops, with the last team standing declared the victor.

Combat is a key element to Chivalry 2, which I can happily say is done perfectly. Whilst there’s a basic set of attacks, consisting of stab, overhead and the simple but effective slash, combo-ing these moves is what makes Chivalry 2 special. But what if you’re on the receiving end of these vicious hits

Well, Chivalry also gives you the opportunity to defend, either by a simple block, a counter attack or a jab and a kick to spice things up. There’s a lot of patience and visual moments to take in when entering a battle between an enemy or two, which takes a lot of learning and strategy. But when you take down even one enemy in a long and treacherous fight, it’s such a satisfying experience, but even dying is still a lesson for the future. 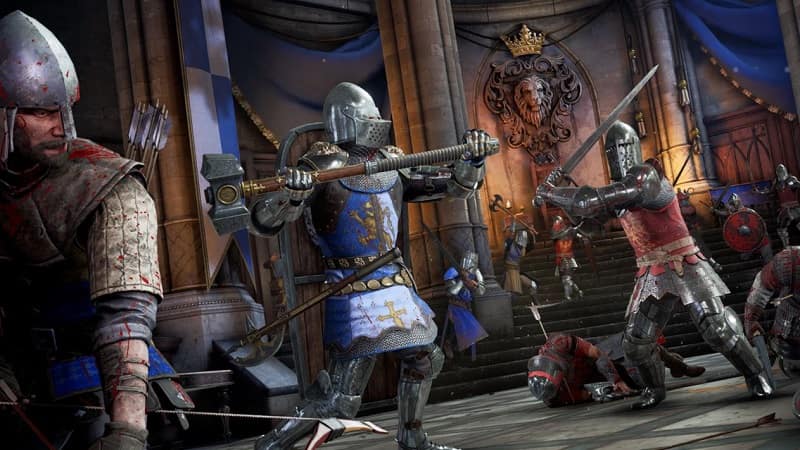 Each player is given the choice to pick between four classes, all of which differ in their strengths and weaknesses. Whilst your best bet to learn mechanics is the Knight, my favourite class is the Vanguard, wielding weapons such as the War Axe causing them to be a destructive force against any enemies. However, they’re health is low, which is where the Achilles heel of the class comes into play. As well as those two classes, there’s also the footman and the archer. The footman excels at short and mid range with melee weaponry to keep charging opponents at a distance and the archer offers support at a long range thanks to his trusty ranged weapons!

Classes each have their own special abilities, as well as subclasses which have their own attributes. All classes are spectacularly balanced, as most of the action comes from the fighting itself and learning how to use the weaponry. I haven’t experienced any moment within the game that I felt was unfair due to balancing issues, as most of my deaths were my mistake from missing visual cues, making me a sandwich for enemies attacks.

Each class has differing weapons to use, war axes that can cause major damage to those unfortunate enough to be on the receiving end, longswords which are incredibly balanced statistically, halberds with low damage but high range and so on. I never felt like a certain weapon was more powerful against me, as becoming good with a weapon is all about finding one that fits your play style. I always found myself picking off small groups of enemies with the War Axe, but knowingly leaving myself open to less damaging, but faster weapons. 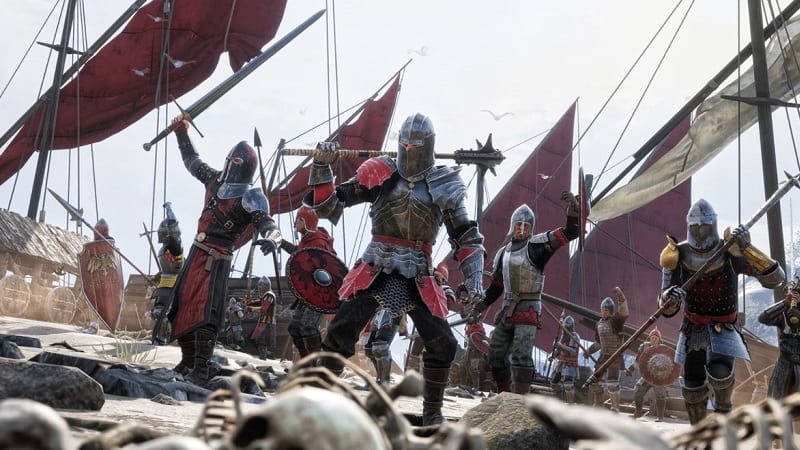 But none of this matters without explaining how amazing Chivalry 2 truly is. Beating an armoured up knight with your bare fists is such an exhilarating moment, or taking down one of the objectives in the last moments after working well with your team and you shout at the TV about how happy you are that you won is such a special feeling. Chivalry 2 lends itself to many stories to be told throughout your time within it, whether they’re humorous, or battles in which you succeeded when the odds weren’t in your favour.

The Siege Experience With Chivalry 2

The clang of swords against armour, the noise of breaking wood as someone’s defence finally falls apart and the sounds of battle cries heard over the castle walls are something to behold. There are moments in Chivalry 2 where there’s such an enticing atmosphere that you wish you could take part in the actual world, despite knowing what actually occurs in such a scenario.

I typically found myself taking in a lot of the scenery within each locale of Chivalry 2’s realm. Like the aforementioned Dark Forest, where small flames light up mystical trees filled with enemies lying in wait or the brooding walls of a castle which you’re about to siege. I’ve died many times from just being in awe of what a spectacular looking world Chivalry 2 resides in, and it’s possibly one of the most gorgeous multiplayer games in a long time. 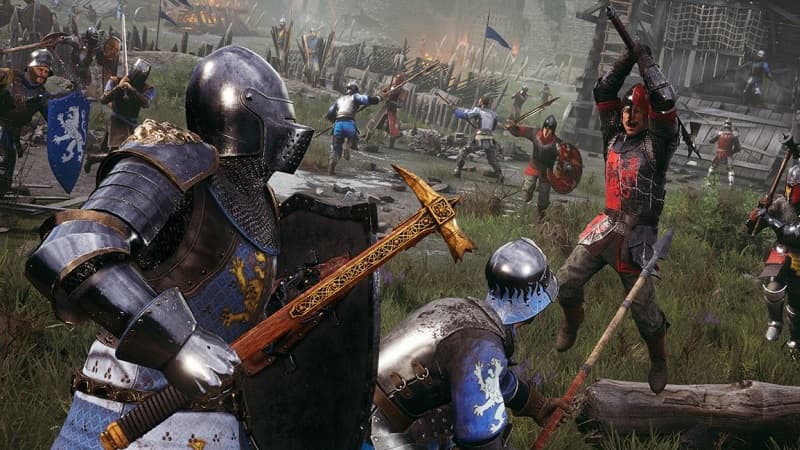 Player customisation is extensive as it is accessible. Whilst the amount of customisable elements are daunting at first glance, once you see how much you truly can change, it’s absolutely set a bar for future online games. I’ve made a Vanguard which truly feels like my own, whether or not it’s only a matter of skins. The great thing; it’s earnable just by playing the game.

The visual design, sound design and performance are all amazing thanks to the PlayStation 5’s hardware. Playing a game like this is spectacular with 4k resolution and the addition of 60 FPS helps with making sure those fights feel fair, smooth and fun. I have yet to find any moments within gameplay where there is a noticeable drop in frame rate, which is a huge positive.

A Knight To Remember

Whether you’re simply looking for a game to pass the time, or wanting a unique and fresh online experience which will keep you coming back for more, Chivalry 2 is the perfect package for anyone who is looking for the multiplayer game of the year. If you’re looking to play with friends, battle seriously or just enjoy a comedic atmosphere akin to Monty Python in tone, then this is the perfect game for you.

I found myself getting so involved within the environments and action that time flew by before I realised it, and becoming more adept and strong with my favourite weapons was something I really enjoyed doing. I can’t express my love for this game anymore than I have done already.

Chivalry 2 prides itself on its chaotic, yet comedic world. It’s a glorious battle cry for gaming, with its spectacularly vicious combat, amazingly detailed maps and particularly awesome performance on PlayStation 5. An early contender for Game of the Year for sure.