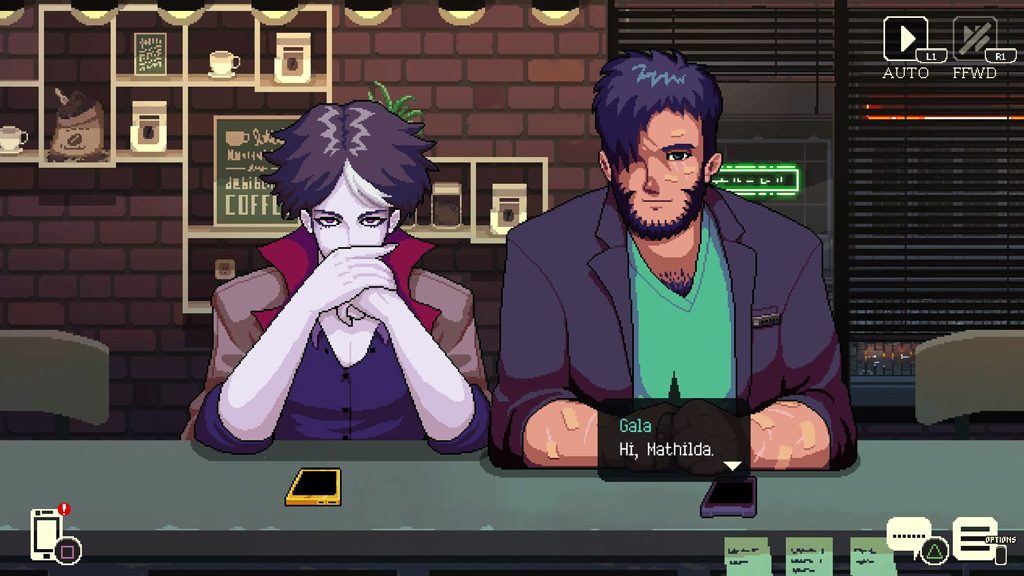 Anyone who has worked in a bar or a coffee shop will know that you have got to be a good listener. As well as the customer orders, you will also have to listen to the gossip from the people who have come to frequent your establishment. Whether you like it or not, being attentive and conversational is essential in order to keep your customers happy. That and churning out delicious and occasionally quirky beverages, whilst occasionally flirting with a lone septuagenarian. Toge Productions from Indonesia has come up with a new game to simulate the working shifts of a barista running a late-night café.

But is Coffee Talk a warming oat milk mocha or a tepid cup of bovril?

Set in an alternative Seattle populated with Elves, Orcs, Werewolves, Succubi and visiting aliens, your barista (insert name here) is tasked with serving drinks to the customers as they arrive on the perpetually wet evenings when the café is open. Freya, the most regular customer, is a journalist who dreams of writing a novel and she starts you off on your barista career by ordering an espresso.

You then select your ingredients which have to fill the primary, secondary and tertiary slots before you brew the drink. Freya’s regular drink involves three clicks on the coffee pot and then presumably she receives a triple-shot espresso which hits the spot when she drinks it in front of you.

Other customers wander in during the evening and after introducing themselves, order various concoctions of tea, green tea, coffee, cocoa and milk. Additional ingredients of ginger, mint, lemon, honey and cinnamon then allow a large bevy of concoctions which allows you to unlock all the drinks in your notebook over the course of the game.

Coffee and milk based drinks also give you the option of creating latte art before you serve, with a simple but satisfying method of creating patterns through rotating the cup and feathering the milk.

The cast of characters which frequent the café spend their time ruminating on their day to day problems with your barista and also amongst themselves, with up to five of them chatting at the same time. The conversations appear as lines of text which you cue with a press of the Cross button, and your barista chips in with some words of wisdom during the exchanges. All of your responses are automated so your only interaction with the game is when one of the characters orders a beverage.

Your influence on the way the stories end is allegedly through the type of drinks you make for the NPCs, but other than their mild annoyance when you make the wrong drink, you don’t appear to have any ability to affect the arc of the characters. Most of the game is spent pressing the cross button to get through the dialogue in order to make another cup of Lemon mint tea or a Cinnamon latté which is around every 5 minutes of gameplay providing you’re a quick reader.

Listen To What The Flower People Say

So basically what we have here is a ‘Listening Simulator’ with an extremely basic and underused barista function built-in. Away from the story, there is an option to just make drinks with the ‘Endless’ feature but it’s pretty limited, partly because there is only the option for three ingredients.

Each of the storylines is fairly engaging but generic – an overprotective father looking out for his pop star daughter, a couple from different racial backgrounds who can’t decide between family and their relationship, an introverted designer who meets an outgoing creative artist who brings her out of her shell etc etc. While these creative troubled souls elicit mild sympathy, there’s a nagging feeling that their narcissistic issues would be solved if they pulled their heads out of their arses.

Social commentary is tackled in the form of werewolves, succubi and vampires discussing racism, sexism and medication problems but there appears to be little sense in masking these issues behind a cast of fantasy characters, when real world characters would have done the job much better, creating a more relatable and engaging cast.

The pixel-art characters are imbued with as much charisma as you could expect given the simplistic two frame animations and text dialogue. While the art style has a certain retro charm, it looks somewhat tired and generic on a large screen. Had the developers upped the graphical fidelity to match the nice concept art included in the gallery, it would have crossed over from 90s retro into anime or a graphic novel style which would been more appropriate considering the fantasy cast of characters.

Ironically the game looked at its best when I used Remote Play on the PS Vita, so perhaps handhelds and phones would have been a more appropriate platform for the game.

The relaxed atmosphere conjured up by the lo-fi ‘chill hop’ soundtrack perfectly suits a late night coffee shop vibe, and there’s plenty of minimalist but melodic tunes here to see you through the three or four hour playing time.

Last Orders At The Bar

It’s always admirable when developers try to innovate or try something new and the concept behind Coffee Talk is a perfectly good one. It’s a shame that there’s so little for the player to do other than make the occasional cup of tea. The frustrating lack of ability to talk to the other characters means that you may as well read a book whilst tapping your finger repeatedly, taking a break every 10 minutes to make a herbal brew.

Despite having to rustle up the occasional cup of coffee or tea, this is one of the least interactive games to grace the PS4. A little more effort on the part of the developer with character interaction could have made the storytelling more enjoyable and given the game some depth. Otherwise if you're happy relaxing and reading the dialogue for a few hours, it could be for you.