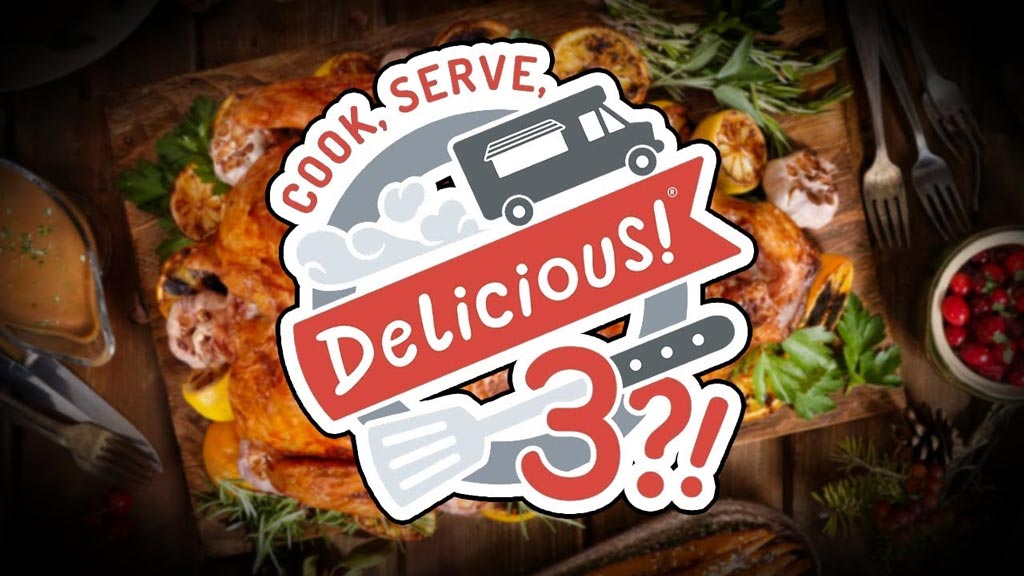 Cook, Serve, Delicious! 3?! PS4 Review. In the near future, a catastrophic war has destroyed most of the United States leaving many chefs either dead or unemployed. The genius responsible for the finest restaurant in America, “Cook, Serve, Delicious” is pulled from the rubble of his demolished workplace and persuaded to be chef on the move for a new mobile fast-food business.

Meanwhile in the present day, a catastrophic government response to an international pandemic has destroyed most of the hospitality businesses in the United States and the U.K. leaving many chefs dead, unemployed or retraining to be professional boxers. As one of your country’s top chefs, can you pull yourself from the economic rubble and become the 21st century mobile Fanny Craddock? Read on and find out!

Get Ready For The Finger Olympics

For the uninitiated, the two previous Cook, Serve, Delicious games have previously attempted to simulate the crazy multi-tasking required by kitchen staff in a busy café or restaurant. The actual gameplay requires zero food knowledge or culinary artistry, instead it’s a combination of complex quick-time button presses executed at a frenetic pace with lightning fast reaction times needed in order to fire out the orders before the customers bugger off without paying.

Baking batches in advance which are then kept warm in holding bays is essential and will also enable you to anticipate orders of the most popular food so you can fire them out instantly when required. As a café manager, I can vouch for the fact that the series has perfectly encapsulated the relentless panic one feels during a busy kitchen service, as well as the pure joy when the doors are closed and you know you’ve successfully fed a bunch of people to the best of your ability.

Aside from the food service, the game offers up options to decorate your café / restaurant / food van to your particular tastes, although this is purely superficial and doesn’t draw in or repel potential customers.

Built into the game are a vast quantity of recipes from many different cultures and accompanying images on how they should appear, although these don’t go as far as exact quantities and baking times but there’s plenty of inspiration for creating new meals at home. Unfortunately the game doesn’t allow you to create your own meals using the myriad of ingredients from all the other recipes which is a bit of a shame – my Strawberry, chrysanthemum and chicken frittata recipe will have to wait for Cook, Serve, Delicious 4…

In this latest version, your chef has been transplanted to the aforementioned food van and you start your new career with a pretty tough tutorial which throws you into the deep end prepping pretzels as the van hurtles towards its destination. Soon you’re required to make extra dishes on the fly as well as banging out the tray baked pretzels and it’s not long before you realise that you need all your wits about you in order to avoid mistakes to attain the gold medal with a flawless service.

Get On The Gravy Train

Most levels feature multiple ‘stops’ so rather than having a breather between the crazy service period, you’ll be filling your holding bays with as much food as possible and preparing ‘Special orders’ which customers have made for collection when you arrive. These are generally much more involved and time-consuming, often with at least two levels of prep so you’d best keep an eye out for your cooked steaks to stop them burning so you can slather them with whichever type of gravy has been ordered.

Customer reactions depend on speed and accuracy and if you string together enough perfect orders, you can greatly increase your multiplier to help level up once the day is over. Levelling up opens up new routes for your food van as well as unlocking ‘trinkets’ for decoration and points which can be used to improve your van’s kitchen facilities. New menu items can also be bought enabling higher scoring foods (you can choose your menu before each stop), although inevitably the foods become increasingly more complex and fiddly as you progress.

It has to be said that the learning curve is alarmingly steep and even attaining a gold medal on the opening few tutorial levels is a herculean task. Fortunately you can switch from ‘Standard’ to ‘Chill’ meaning that customers are happy to wait as long as it takes for you to bang out their chow, and although you still have to watch out for foods which may burn or spoil, it at least enables you more time to appreciate the level of detail put into the representations of the food you’re serving.

That said, you can forget about any gold medals on ‘Chill’ – for that you’ll need to switch back to the bedlam of ‘Standard’ and ingest as many uppers as you can lay your hands on to finish any level with zero mistakes.

Foods are labelled with numbers relating to their complexity, with ‘0’ rated foods usually involving throwing patties, chunks of meat or bread crumbed fast food into a fryer or griddle. Skip forward to ‘5’ rated foods with a myriad of ingredients, customer options and cooking levels and you’re into a world of pain.

Concentrating on perfecting these top rated dishes while alerts are flashing and customers are becoming more agitated is nearly impossible, and while the lower level foods can be mastered quickly with muscle memory, the top rated foods never become easier with practice. Quite simply, they are highly frustrating and never satisfying to pull off. One mistake before serving by putting the wrong ingredient on renders the whole affair null and void, and while a gaming challenge is always welcome, one gets the feeling that Vertigo Gaming Inc have taken the difficulty level a bit too far.

While there is plenty of gameplay to be had traversing the cities across the U.S.A. which haven’t been razed to the ground, there’s not enough variety between levels and the crushing difficulty ends up discouraging an enthusiastic player who realises that attaining a gold medal is near impossible on anything but the first few levels. Further into the game, your van comes under attack (in line with the jokey dystopian scenario) but by this point, anything which increases the difficulty even further merely becomes a massive annoyance.

Cook, Serve, Delicious 3’s strongest points are the vast library of recipes and the perfectly judged presentation. The recipe library covers pretty much anything you can think of – junk food, salads, burgers, extravagant coffees, pizzas, Asian street food, blancmange, burritos, dosas, curries and a bewildering selection of many, many more foods from across the globe.

Impressively, each food has a brief paragraph about its origin and history and although the recipes don’t include quantities and measurements, the method is there so you can quell your hunger pangs with a quick internet search and a trip to the relevant ingredient store to make your own.

In-keeping with the previous games’ comic book visuals and smooth 60s inspired easy listening soundtracks, the third game in the series maintains these admirable and perfectly apt audio / visual delights. The food graphics ape the gaudy over saturated food photography seen in cook books from the 50s and 60s but despite their exaggerated presentation, they still manage to make you hungry while you’re struggling to serve the great unwashed…

The chores from the previous games have been removed, leaving the entire focus on the food service which is a welcome change, although the reality of running a kitchen or restaurant is that you spend at least half your time washing or cleaning…

While there’s not enough new content here for anyone who bought the second game in the series to warrant a new purchase, there’s a massive challenge ahead for foodies who want a finger workout. In small doses, CSD3 is a blast and played as a split screen co-op, it’ll be a great drinks-night game. The single player experience is disappointing compared to CSD2 due to the sheer pig-headed toughness and the lack of genuinely new ideas. Extra menu items and a dystopian scenario do not maketh a new game, and this third outing could have easily been a DLC for the second game.

If Vertigo had added in some online competitions and scoreboards, some creative elements where you decorate dishes or combine ingredients to make new dishes, the necessity to avoid waste and a more rewarding learning curve, then this would have felt like a more genuine sequel. As it is, I can recommend buying CSD2 until this iteration is either patched with a more shallow learning curve or is on sale on the PS Store.

While CSD3 retains the frenetic pace of its predecessor, there aren't enough new additions to make this an essential update. The huge library of recipes is mightily impressive and the presentation is as good as ever, so if you can handle the crushing difficulty, give your flabby fingers a work out in the back of this mobile food van.