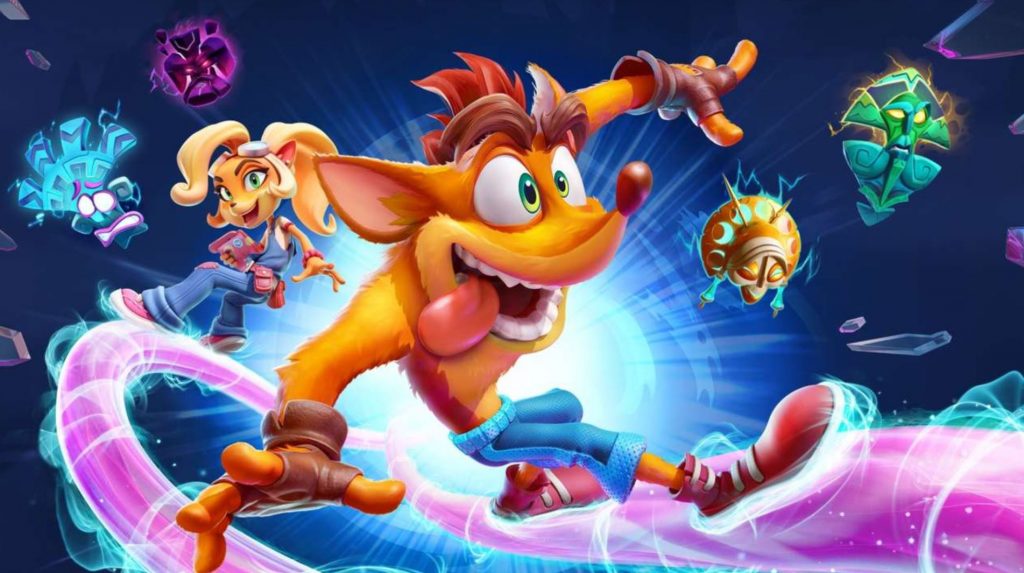 Crash Bandicoot 4: It’s About Time PS4 Review – It’s about time I got around to a Crash Bandicoot game and the fourth entry in the franchise is by far one of the best games I have played in 2020. It is a great combination of fairness and challenge, offering ample content to sink your teeth into and a ton of junk to hunt down for collectors like me. It’s really, really impressive. Now, it’s about time I got into the nitty-gritty of why Crash Bandicoot 4: It’s About Time is so good.

Off To A New Dimension

After the evil Doctor N. Tropy and Doctor Neo Cortex begin working to assemble the Quantum Masks, Crash And Coco get contacted by one of them and pulled into a different dimension to stop their evil plan and save not only their world but other dimensions as well. Whilst on that journey they reunite with Tawna, Crash’s old girlfriend (but this time she is from a different dimension) and Dingodile who assist them. All four of these characters are playable, along with Neo Cortex, who for reasons I won’t spoil, ends up being a pretty major part of the latter half of the game.

Whilst the narrative is simple, Toys For Bob have created an entertaining story which is paired with some truly excellent voice-acting, bringing these characters to life in a way I didn’t expect for a game that revolves around its try-fail-try-again gameplay loop. The writing here also works well with the excellent performances, and the game is genuinely funny at points, poking fun at itself, Crash’s history, and the fact that a whole bunch of games basically got cut out of the canon with Crash Bandicoot 4. Although, the lack of any Crash voice-acting did stick out during extended cutscenes.

When it comes to the platforming and levels in Crash Bandicoot 4 they are marvellous and some of the best I have ever played. Most of Crash’s classic moves return, along with the same crates boxes to smash and detonate from the original trilogy and the 2017 remaster. But, to help modernise the game, new features such as a marker showing where Crash will land once he has jumped help new players get stuck in, without feeling like they are being asked to climb Mount Everest.

But, don’t worry, because the difficulty the series is known for is still present and I have the death counter to prove it. At over 550 deaths across the game’s campaign levels and dimensions (worlds), I can officially say that Crash Bandicoot 4 is bloody tough. However, it is always fair. Toys For Bob have balanced the scales perfectly when it comes to the level of difficulty and also the achievability of the challenges put in front of you. There isn’t a single point in any of the levels in the campaign where I was given an impossible task.

This challenge is then bolstered by the addition of four Masks, which provide unique gameplay benefits that can offer up new opportunities for you and also allow Toys For Bob to create puzzles unlike anything they were able to do before. Lani-Loli allows you to phase objects in and out of existence, Akano gives Crash a unique spin move that destroys boxes by the dozen and also allows him to propel himself up in the air or slowly float back down to solid ground. Kupuna-Wa will slow time for a few brief moments and Ika-Ika will flip gravity allowing you to switch between two planes, the ground and the ceiling.

All four of these masks are available in specific levels and add a nice change of pace and flavor to the game, making its lengthy campaign not feel repetitive at all, as new challenges are being thrown in, such as having to slow down time to walk over Nitro boxes and avoid the explosion or flipping gravity to walk along the ceiling and take out an enemy shooting at you from above.

These are just some of the simpler ways the masks are used, but the final third of the game really ups the challenge asking you to slow down time and jump on spinning blades or engaging in a gauntlet during the final level which mixes all four of the masks and tasks you to think quickly and have perfect timing. This section might have been the hardest thing I have done in a game all year.

On top of the traditional levels, platforming is varied up with chase sequences, bonus paths for you to complete, and some great boss fights. Crash Bandicoot 4’s boss fights are wonderful and use the game’s masks and classic platforming to great effect. They are spectacles that really help bring the dimension-breaking story together in a way the more traditional levels don’t.

Characters, Collectibles, And A Whole Lot Of Extra Content

I mentioned earlier that Dingodile, Tawna, and Coco are all playable in Crash Bandicoot 4. Whilst, Coco is a skin for Crash and fundamentally they are the same character with no differences, Dingodile and Tawna get their own unique levels, along with Neo Cortex, who can also be played. These alternate timelines are offshoots of the main story levels.

Tawna and Dingodile are both introduced early on. Tawna is far less agile than Crash and Coco, but she can use a grappling hook to get around the levels, which creates some unique structures and opportunities that aren’t possible usually. Meanwhile, Dingodile is an absolute blast to play and I could take a whole game with him on his own, using his large suction cannon to hoover up crates and wumpa fruit. The feeling of annihilating everything around you and the rumble on the DualShock 4 when doing so makes him a blast to play and offers some of the most cathartic gameplay in Crash Bandicoot 4.

Neo Cortex plays entirely differently. He can only deal damage from long-range and is unable to double jump, but he is given a dash to off-set this disadvantage. His designated levels were my least favourite of the 3 extra playable characters as his playstyle is slower. Whilst, they are good and offer unique setpieces thanks to his new abilities, they weren’t my cup of tea.

For those who want to collect everything in a level, Toys For Bob has you covered with a bucketload of optional goodies to find and objectives to complete. Hidden Gems, optional paths, and hidden crates are littered throughout every level in Crash 4. Each level also has its own objectives to complete, such as finding the Hidden Gem, dying less than 3 times and getting a certain percentage of the Wumpa Fruit in said level.

But wait, there is even more for you to complete. Toys For Bob have created challenging Flashback levels, which are the true test of platforming prowess in Crash Bandicoot 4. I haven’t been able to beat single one yet as they are so tough, but every jump and attack needs to be perfect and they are the perfect addition for the hardcore Bandicoot players.

There are also two local multiplayer modes, where you can compete against your friends to be the fastest in a level or collect the most Wumpa Fruit. These modes are quite shallow and don’t remain interesting after one or two tries. These were the only part of Crash Bandicoot 4 that I felt disappointed by.

The final piece of content we need to talk about is the fantastic ‘N.Verted Mode’. Each level has an inverted counterpart which is unlocked after beating the regular version.

The inverted version of these levels acts like a mirror mode with the course reversed. But, Toys For Bob have gone the extra mile and dimension-shifted the visuals, colors, and even objects in the level giving them this hazy blue rift quality to them, as if they are stuck in-between two dimensions. I haven’t got very far in the inverted levels yet but they are without-a-doubt what I am most excited to return to, particularly to see the new and unique ways the developers have decided to twist the looks of Crash Bandicoot and the levels I had previously played.

Crash Bandicoot 4 would be my game of the year if The Last of Us Part 2 didn’t come out in 2020. Toys For Bob have done a jaw-dropping good job at crafting a tough and unique sequel to a beloved franchise, putting their own twists on the formula, and packing in play-sessions full of content to keep new and returning fans busy for dozens of hours.

Despite an underwhelming multiplayer mode everything else Crash Bandicoot does is flawless, from the tough Flashback levels to the zany N.Verted mode and unique levels offered by playing as Dingodile, Tawna, and Neo Cortex. Crash Bandicoot 4 is an essential game that everyone should experience because the quality on offer here is on-par with what we have come to expect from the best of Sony’s first-party studios and Nintendo’s platforming adventures. Crash Bandicoot is officially back and better than ever and I hope he sticks around this time.

Crash Bandicoot 4: It’s About Time is out now on PS4.

Crash Bandicoot 4 is a masterpiece in almost every aspect of the experience it offers. The excellent N.Verted mode, tough Flashback levels, extra characters, objectives to hunt down, collectibles to collect, and engaging campaign and bosses come together to provide one of the best platforming games on PS4 and an experience that rivals Nintendo's best 3D platformers. Crash Bandicoot 4: It's About Time is nothing short of an essential experience for everyone.