Crossing Souls is another great offering from publisher Devolver Digital and developer Fourattic. Looking to capitalize on the success of shows like Stranger Things, Crossing Souls does a great job of recreating a science fiction story set in the ’80s and its gameplay mimics that of earlier ’80s and ’90s titles.

Crossing Souls tells the story of a band of friends who live in a small town looking for anything to entertain each other. Chris is the big brother to the group and Math is the boy genius, while Charlie is the no nonsense tom-boy. Big Joe is the hard-hitting big man of the group, and Kevin, the younger brother of Chris, is a big jerk.

One day they discover a dead body with a unique gem in his hands and Math – being the genius that he is – creates a device using the gem that allows the group to see another spiritual dimension. After discovering the great tool and invention Math has made, the group finds themselves in the middle of a government conspiracy to start a war that will kill all but a select few on the planet.

The story starts off great with its small town setting but quickly becomes over blown with its size and scope. The stories scope grows so much that it loses its small town charm. It’s a shame because I thought the story was really strong at the beginning but started to go downhill when the setting began to change outside the town.

Crossing Souls uses each of its characters to their advantage and each one is able to do things that the others can’t. Big Joe is able to move heavy objects, for instance, while Kevin is the only one who is able to climb vines and scale buildings. Each character’s skills are perfect for the various situations the group finds themselves in.

Most of the enemies are pretty easy to kill and don’t pose much of a challenge, but Crossing Souls boss fights are a delight. Harnessing the same energy and spirit of boss battles from retro titles back in the day, the boss battles require you to remember the timing of attacks and the patterns of your enemy and wait for a chance to strike. It really took me back to my childhood, and I really enjoyed the boss encounters.

It’s not just about the beat’em up action either. Some parts of Crossing Souls have you dodging attacks in a top-down shooter style scenario, and escaping from police on your bicycle avoiding obstacles in your way. These missions are a blast to play and a great change of pace.

The dialogue and banter between the band is also a high point. I grew very attached to each character; the writers did a great job with creating an impressive dynamic between them. The writing is also great when it comes to references to the time period. Posters of popular movies at the time are displayed throughout the town but with a slight change in the name because of copyright issues.

Easter eggs are scattered throughout Crossing Souls, from the posters I mentioned to even some of the characters that appear in the game. One of the bosses in Crossing Souls is identical to “Vigo the Carpathian” from Ghostbusters 2. He even lives in a painting just like he does in the movie. Even the games collectibles are easter eggs. Paradies of VHS tapes from popular movies like The Terminator and records of popular albums are some of the collectibles you can find in Crossing Souls. 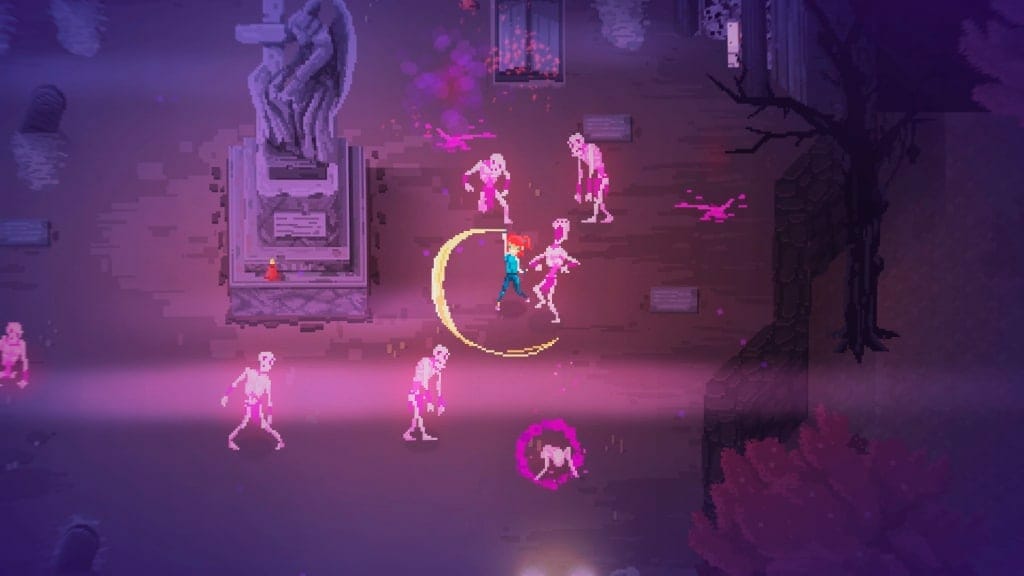 Crossing Souls graphics are just as retro as you would expect, much like the titles Devolver Digital is known for. The highly pixelated style works great for Crossing Souls ’80s setting, though I found some issues while trying to determine the distance to a platform that I had to jump to. I also found it hard to determine what plane I was standing on.

A lot of the time I would be standing on a higher plane and couldn’t determine where the next plane was. Consequently, I found myself falling from higher distances and having to climb all the way back up to where I started.

The music is also hit and miss. Most of the game you will hear some ambient music which again mimics music you will probably hear in an ’80s science fiction movie. It’s not until the awesome electronic music kicks in though that the audio grasps that 80’s science fiction vibe. The electronic music mostly kicks in during boss fights and high tension moments in the story. It’s a shame that the electronic music isn’t used exclusively as I feel it would have been a better choice and you wouldn’t feel as disconnected from the ambient music I heard throughout the majority of Crossing Souls.

Overall, Crossing Souls is another great title from Devolver Digital. I absolutely loved the ’80s science fiction setting and the electronic music is a great treat. Though the story loses some of it charm as you progress, there’s plenty to enjoy. From its brilliant cast of characters to its throwbacks to a memorable era, Crossing Souls has plenty of soul.