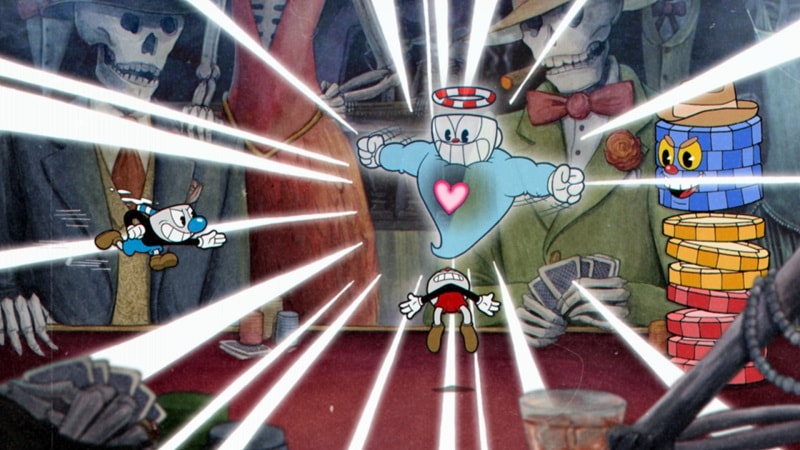 Cuphead PS4 Review – After nearly three years of waiting PS4 gamers have finally been able to get their paws on Cuphead, Studio MDHR’s extraordinarily opulent and critically adored 1930s styled platforming shooter effort – is it any good though? Well, yes. It’s not only *any* good, it also happens to be very, very good and neatly proves in the intervening three year wait that nothing has aged or been lost in the leap to Sony’s current generation lump of plastic. Make no mistake, Cuphead is absolutely the real deal.

Neatly running concurrent with Cuphead’s nutty visuals is its equally surrealist premise. As the titular Cuphead and their friend Mugman (if you’re hooking up with a friend in co-op, but more on that in a bit), these two anthropomorphic kitchen utensils find themselves living an idyllic existence with their Uncle Kettle (stay with me). That is, until the cheeky duo go down to a casino and lose a soul-stakes bet to none other than the devil himself from which they can only extricate themselves from their due by collecting debts from all manner of odd and horrific characters. It is, quite simply, the gloriously mad stuff that 2AM stoner television is made of.

It’s certainly fair to say that just about everyone fell in love with Cuphead’s deeply luscious audiovisual presentation first and foremost. Looking like a heady cocktail of prohibition-era, Betty Boop style cartoon visuals aided by watercolor art, cel-shaded design, hefty amounts of LSD and all underscored by a foot-tapping jazz soundtrack which effectively seals the deal on Cuphead’s innate ability to effectively separate the player from reality, there really is nothing that looks or sounds like Cuphead. It is a wholly unique prospect in this regard that will make your visual and audible senses feel like they’ve been put through a technicolor chainsaw blender.

As such, it can prove all too easy for many folk to fall in love with Cuphead’s beguilingly attractive aesthetic and the idea of what they want Cuphead to be, rather than what it actually is. The truth is that when you look past Cuphead’s stupendous audiovisual presentation something much deeper reveals itself. A pitch perfect platforming shooter that takes absolutely no prisoners with a level of difficulty that teeters on the brink of being unfair but always manages to pull itself back from the precipice, Cuphead is arguably not for the easily frustrated or those who are new to the Mega Man school of shooting platformer that Cuphead appears to be an avowed student of.

Rather than following Capcom’s old-school efforts of having a series of stages that are simply chained up together, Cuphead permits players to wander around a gorgeously realized open-world map that makes the most of Studio MDHR’s superbly evocative and unique setting. From here, players can elect to speak to NPCs, tackle stages in order to progress, uncover secrets and buy upgrades from a scary looking vendor whose voice sounds like how cartoon characters would sound if folk watched cartoons in hell.

When Cuphead unfurls the meat and potatoes of its platforming shooter design, it’s a little unexpected to discover just how deeply Studio MDHR have managed to nail the fundamentals. Controlling both Cuphead and Mugman is nothing less than an unfettered joy. Bolstered by a liquid smooth framerate, both characters are ultra-responsive and allow you to nail pixel-perfect leaps, dodges and shots with very little effort.

Allowing players to open fire on their foes in a free-form manner or through a rigidly old-school locked 8-way approach, Cuphead troubles the player in earnest with all manner of enemies that attempt to melee the player, drop things on top of them, explode the ground from underneath them and much more besides. While Cuphead invariably nails the fundamentals of the platformer shooter, it’s really in the seemingly everlasting array of enemies and the situations that they put you in from which real sophistication and complexity begins to emerge from Cuphead’s rigid design.

Often stuffing the screen with all manner foes while demanding that the player negotiate challenging leaps during extremely busy scenes of carnage, it’s easy to see why Cuphead becomes so challenging so very quickly – a fact that is exacerbated by check-pointing mechanics which force you to restart the level as soon as you run out of health.

Luckily, Cuphead allows players to perform a jump parry maneuver that allows them to hit or avoid anything in the game world that is colored pink. This means that when things go properly crazy and the screen fills up with health-sapping enemy projectiles, a path to freedom can often be taken by jump-parrying your way through the correctly colored bullets, providing Cuphead’s platforming shooter sensibilities with yet even more depth as a result.

Beyond the avoidance of damage, Cuphead’s jump parry system also has some other great uses too. When playing in co-op, the jump parry is used to resurrect a fallen friend and must be timed perfectly in order for it to work (something that’s easier said than done when the screen is overflowing with bullet-murder), while successful parry jumps will refill the player’s EX bar which allows them to pull off powerful attacks. As a result, parrying is as intrinsic to the design bedrock of Cuphead as the basic tenets of jumping and shooting appear to be.

Massive screen-filling bosses present a reliable supply of jaw-slackening spectacle as they flood your viewing spectrum with attacks, but really these often towering behemoths are an effective microcosm of everything that Cuphead does so very well from a design perspective. Included in that is how these bosses make use of the parry jump system too.

In one such instance the Floral Fury boss – a trio of three very different (and very large) plant based foes will fire seedlings into the air whereupon one of the seedlings is pink. Here, the player can parry jump the pink seedling and destroy it, but failure to do so will cause the seed to hit the ground and transform into a pumpkin flower which will give our trusty hero a whole heap of grief later on in the fight.

Another battle meanwhile, has our hero fighting with Ribby and Croakes – two massive boxing frogs that mid-fight inexplicably turn into a huge slot machine which fires out deadly coins. The solution? Parry jump the pink lever and cause the slot machine to cycle, resulting in an all-new enemy attack pattern that allows you to progress through the fight. Much more than just an audiovisual spectacle then, the gargantuan bosses of Cuphead are as much astute tests of player skill as they are ear and eye rending treats.

Helping to make things a little easier are the various special attacks and trinkets that you can obtain with your hard won coins from Cuphead’s numerous vendors that scattered across its overworld map. However, in truly fiendish fashion, not all of these items and trinkets provide straight upgrades. For example, one upgrade might change your special attack to a hugely devastating horizontal beam that leaves you vulnerable for a second or two, while another might extend your health but lower your overall attack damage; implementing a neat risk and reward dynamic in the process.

So Cuphead then, a resolutely mega-impressive platforming shooter with challenge for days and the sort of LSD infused, 1930s audiovisual presentation that will give you low-key nightmares for weeks. Cuphead is gorgeous, endlessly rewarding and if you have even the smallest inclination to play something different this week with a wholly original style and proper satisfying challenge, then Cuphead is 100% your huckleberry.

Cuphead is out now on PS4.

Three years on from its original release on other platforms and there's still nothing like Cuphead. A delirious, LSD-infused trip through a prohibition-era styled cartoon hellscape, Cuphead underscores its utterly unique presentation with a rock solid and fundamentally excellent platform shooter that stands effortlessly shoulder to shoulder with the best in the genre. The wait has been worth it.