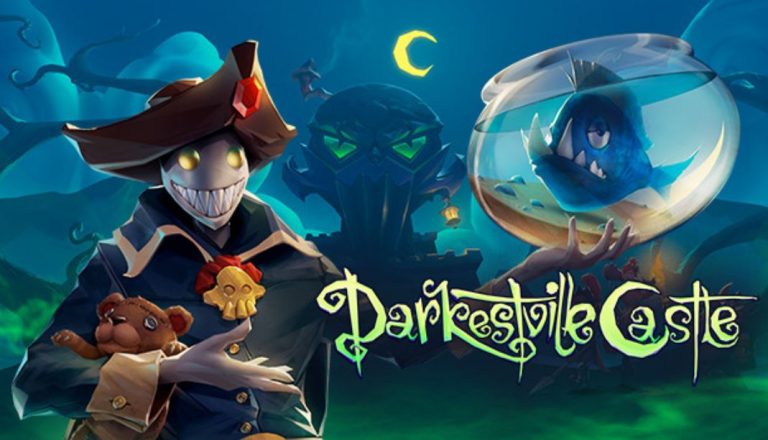 As the demon Cid, a known prankster and general all-round villain who gains a sizeable amount of satisfaction from inflicting misery on others, players find themselves locking horns with local do-gooder Dan Teapot who has called a band of demon hunters to vanquish him in earnest. What follows is a chuckle-stuffed odyssey that follows Cid as he attempts to outmanoeuvre his pursuers. Cid also looks the part too – boasting a seemingly permanent tooth smile and two golden buttons where his eyes should be. A proper fairytale villain then.

With its colorfully vibrant backdrops and twisted looking character designs, on first impressions certainly, Darkestville Castle certainly bleeds a fair amount of visual inspiration from the Tim Burton school of creepy gothic aesthetics and then marrying it all to a Saturday morning cartoon style presentation. The comparisons don’t end there either, as Cid himself evokes a notably similar cheerful mischievous air to Jack Skellington from Henry Sellick’s timeless stop motion effort The Nightmare Before Christmas.

Beyond the visual side of things, Darkestville Castle has an appropriately eerie if not especially memorable soundtrack. However, when it comes to the voice acting performances, things are somewhat mixed here to say the least. While Cid himself and a couple of other lead characters are voiced appropriately well (with Cid’s voice actor in particular doing a great job of infusing every response with sarcasm and irreverent wit), there are other more minor characters who aren’t quite voiced with some the level of conviction and quality and can come off as touch cringeworthy as a result.

Beyond its somewhat uneven audiovisual presentation though, Darkestville Castle fares better in the dialogue and puzzle solving aspects that the point and click adventure genre so often depends upon. A consistently funny affair where many of the jokes land more often than not, Darkestville Castle walks the same sort of tightrope between slapstick and irreverent humor that Tim Schafer’s earlier point and click adventures also successfully managed.

The inspiration taken from The Secret of Monkey Island and other prolific adventure titles that Schafer worked on during his times at LucasArts, also comes through somewhat with the puzzle solving too. Very much in a similar vein to those point and clickers of yore, players must progress conversations with other characters as well as discovering and combining items in the environment which can then be used elsewhere in order to allow Cid to progress through the chaptered narrative of Darkestville Castle.

On the whole, the numerous conundrums that you’ll encounter are quite logical and relatively easy to solve for the most part, though a select number of puzzles later on in the game become quite challenging indeed and require a fair chunk of out of the box thinking to get past, it doesn’t ever devolve into pixel-combing for clues. Because of it’s gentler-than-most difficulty curve, Darkestville Castle remains a tantalising prospect for point and click newcomers especially.

With a single playthrough clocking in at between five to seven hours, Darkestville Castle isn’t the longest game of this genre type around and neither is it the best (the superb Thimbleweed Park holds that honor), but it is appropriately stuffed with all manner of eye-opening locales, well-animated characters, decent puzzles and a fair whack of comedy to boot. Additionally, the game has a nice and easy selection of trophies to scoop up in addition to a fairly simple platinum trophy, so it has that going for it too.

Even though Darkestville Castle never really manages to reach the height of the genre classics that it so deeply inspired by, it nonetheless never outstays its welcome and provides an easily digestible, ultimately charming and chuckleworthy adventure that is grandly suited for point and click veterans and newcomers alike.

Darkestville Castle is out now on PS4.

Though lacking some of the flair and longevity of its classically inspired genre brethren, Darkestville Castle nonetheless provides an enjoyable dollop of point and click adventuring by swapping out the usual fresh-faced hero for a sarcastic and high amusing viliain. This is one for genre newcomers and stalwarts alike.