Nowadays, zombie-inspired videogames are a dime a dozen – slowly, yet intently creeping onto any gaming system that they wish to infect. Ever since their resurgence into popular culture back in the early-to-mid ’00s, we’ve been treated to sluggish, plodding zombies, bile-bloated ghouls, multi-limbed monstrosities and even towering, puss-fuelled deformities; all hell bent on causing as much chaos as inhumanely possible in their quest for human flesh. The ubiquitous nature of these monsters in the gaming world means that the manoeuvrability for originality is suspect at the best of times. Still, despite that, there’s always ample room for any game that tackles the zombie arch and moulds it into a fun, addictive experience and that’s exactly where the ‘Apocalypse Edition’ of developer Housemarque’s top-down shooter, Dead Nation, manages to finds itself.


For the as-of-yet uninitiated, ten levels of varying length make up the bulk of Dead Nation’s campaign, with each being split up into several bite-sized segments; providing opportune spates of downtime for recuperation, weapon purchasing and restocking in-between the gun-slinging, limb-releasing fun. It is, however, a fundamentally linear experience with some little intricacies and pathways dotted throughout; these routes serve no real purpose other than to just hold chests and mementos, whilst others just lead to nothing of importance. Your time in the apocalyptic world will for the most part revolve around boot-looting cars, spraying bullets into all corners and charging on through into the next safe haven. Incredibly, however, this sort of rinse-and-repeat process doesn’t become monotonous, quite the opposite in fact; the sectored nature of the gameplay means that you’ll be shifting stages long before the struggle becomes laborious. Also, given the fact that the gameplay hinges on the arcade-esque principal of combo-building for an accumulative score, you’ll find yourself replaying specific missions just to better a particular points tally or beat a posturing friend. 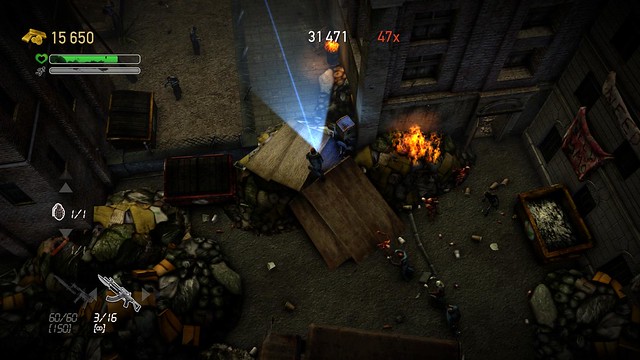 Dead Nation’s attempted story is a forgettable fodder that quickly becomes inconsequential once the realisation occurs that an emotive, striking narrative is not the order of the day, but rather the perpetual pick-up-and-play quality of the gameplay on show. The control and content of which remains largely untouched, other than a few contrivances, such as the DualShock 4’s speaker – used exactly as in the developer’s previous PS4-exclusive, Resogun – pronouncing each weapon and projectile as you cycle through them. The lack of touchscreen usage is a real missed opportunity, as it could’ve done wonders for the precision aiming of grenades, flares and the like. Still, the gameplay is as smooth as ever in an unfaltering 30 frames per second and full 1080p, providing seamless blasts and thrills as you mow down hordes of the undead with the weapons at hand, which range from a sub-machine gun to the more fatal likes of the rocket launcher and blade cannon.


There is certainly a sort of re-animated sharpness to the three-year-old assets on show and the fire/weather mechanics have improved a deal, but other than that you’d be hard-pressed to find any real graphical difference of note as the pervasive fog subsumes much of the ground you tread on initially. Nevertheless, your attention will lie elsewhere as you play the common enemy to a game of Cops and Robbers, or when you enter the outskirts of a circus and have to pummel clowns with bullets to detuned, maniacal music. The game’s pseudo-isometric camera holds up brilliantly for the most part, but there can be instances whilst foraging for mementos and upgrades where it gets stuck momentarily in the more crevassed parts of the levels. This is quite an arbitrary complaint, though, as it’s an extremely infrequent issue. The game’s Trophy list has also been spruced up, too, and now includes the much-coveted Platinum for all the Dead Nation suitors to feast their eyes upon.


The most impressive addition to befall this complete version of Dead Nation is a little, seemingly meagre, difficulty level within the campaign; ‘Broadcast +’ cleverly takes advantage of the PS4’s streaming capabilities and allows viewers to directly tinker and tailor your playthrough as they see fit. This can have a positive or adverse influence for the player as there are up to 30 different effects, ranging from blocking ammo spawns to creating more enemies to fight. When adhered to in a sportsmanlike way (who are we kidding), it’s an immensely engaging way of connecting the viewership and the gamer – in reality it can just make the game more unforgiving than it already can be. 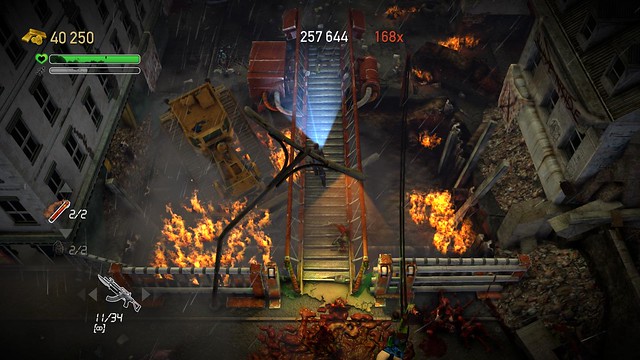 Several other modes – including ‘Endless’ and ‘Arcade’ from the Road of Devastation DLC – do attempt to extend the game’s replayability and succeed to a degree, but for the most part they do little to deviate away from the tried-and-tested methods of the main campaign and in that sense come across as a little bit redundant. Another inclusion is Challenge mode, an exclusive to the PS4 release, which allows players to tackle other gamers’ scores by playing alongside their avatars in an attempt to jump up the elusive leaderboard. The replayability at the heart of these modes really depends on how infectious you find the gameplay – it may, however, fall a little flat for some tastes.


Housemarque’s Dead Nation: Apocalypse Edition harbours all the addictive pick-up-and-play qualities synonymous with everyone’s favourite PS4 indie developer – providing a thrilling zombie romp, with fast, fluid mechanics and controls. And while it may not strain the PlayStation 4’s considerable capabilities by any stretch, the inclusion of some new leaderboard-based modes coupled with the innovative streaming feature make this a welcome addition to the PS4 indie roster. The slightly upgraded textures, improved weapon cycling and usage of the DualShock 4’s unique traits may not, by themselves, warrant a full re-purchase if you’ve already played the PS3 version to un-death. However, given the fact that the game will be free to subscribers of PlayStation Plus beginning on March 4 you’d be as mindless as one of Dead Nation’s brain-dead zombies to pass it up.

Housemarque's Dead Nation: Apocalypse Edition harbours all the addictive pick-up-and-play qualities synonymous with everyone's favourite PS4 indie developer - providing a thrilling zombie romp, with fast, fluid mechanics and controls. And while it may not strain the PlayStation 4's considerable capabilities by any stretch, the inclusion of some new leaderboard-based modes coupled with the innovative streaming feature make this a welcome addition to the PS4 indie roster.