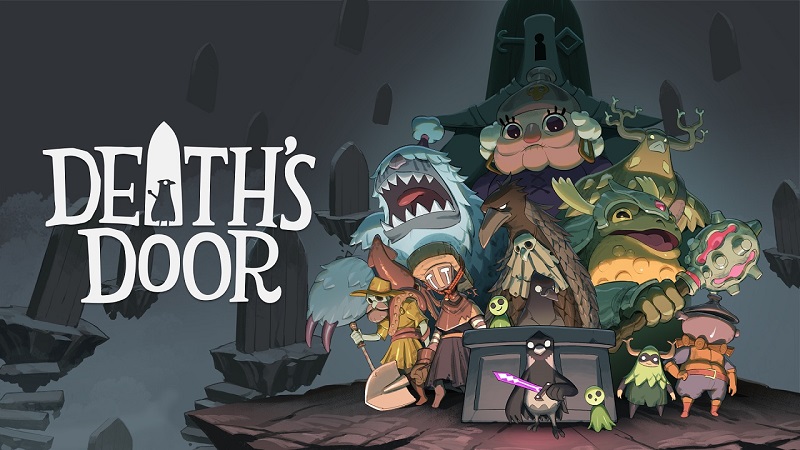 Death’s Door PS5 Review – At first glance, Death’s Door appears an inoffensive indie title with a familiar cute aesthetic. However, it won’t be long after starting that Acid Nerve‘s isometric action RPG reveals itself to be so much more.

Despite obvious influences and tongue firmly in cheek, Acid Nerve has delivered on a surprisingly deep adventure. Moreover, it has achieved a satisfyingly challenging romp without any compromise to its wonderfully simple nature.

With tight mechanics, intriguing dungeon crawls and a memorably endearing tale about a soul reaping crow, Death’s Door is an indie title that demands and deserves mainstream attention.

As your little crow’s feet potter down the monotonous sleazy office halls of The World Of Doors, its difficult to know what you’re in for. It isn’t difficult to appreciate the art-style of the game, though. In the mostly colourless world hub, certain colours still emanate producing an easily pleasing aesthetic. 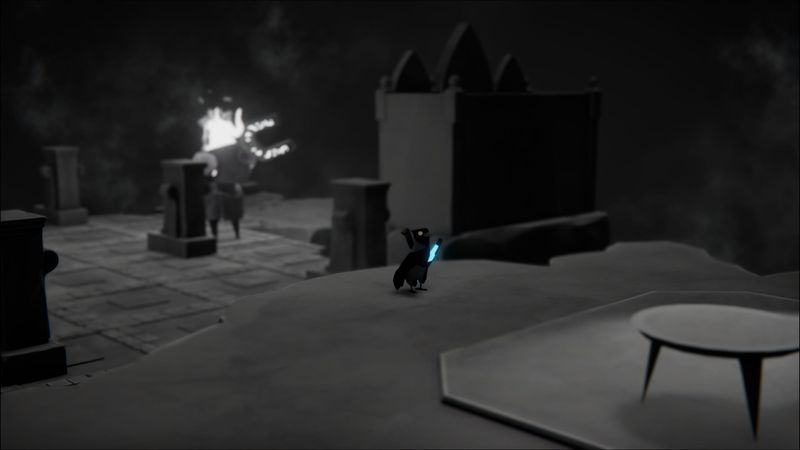 Outside of the main hub in the larger game world you can enjoy a fully coloured landscape; a cartoonish isometric backdrop well suited for Death’s Doors characters. The world’s many unique characters have a charming cel-shaded-like appearance to their models, popping out brilliantly on screen.

More than just eye candy, the visuals are perfectly practical for the experience. Combat requires quick reactions and aim, so the presentation is well crafted with your senses in mind. Special effects such as sword and slashes, projectiles and explosions follow suit with an extra layer of illumination.

As a result, even the busiest screens manage to remain artful without becoming impossible to follow. For this reason, the visual presentation is easy to get along with, but by no means jaw dropping. Death’s Door has the look of many modern indie titles; however, it does the job, and stands a great achievement for a small UK team. 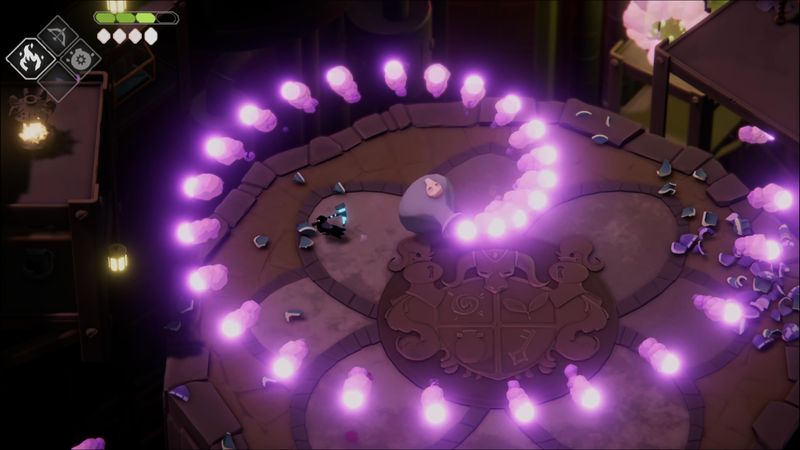 On other hand, the audio of Death’s Door does manage to stand out. The score that adapts over the different biomes seamlessly captures you into the world with a mix of haunting yet light hearted motifs. The soundtrack doesn’t exist to captivate, but on reflection it is difficult to deny that this was a big part of what immerses a player in the world.

The influences for Death’s Door are more than apparent within moments of exploring the first proper biome. Your friendly grim reaping crow is the avatar for a very classic Zelda-like adventure, seasoned with a Dark Souls sprinkle for good measure.

Combat is very simple, but it is put together extraordinary well. Your arsenal is limited to a light and heavy melee attack alongside a choice of four ranged spells, which are accumulated through the adventure. However, there are a few other offensive manoeuvres in your repertoire. For example, you can deflect enemy projectiles and perform special hits at the end of a dodge or hook shot. 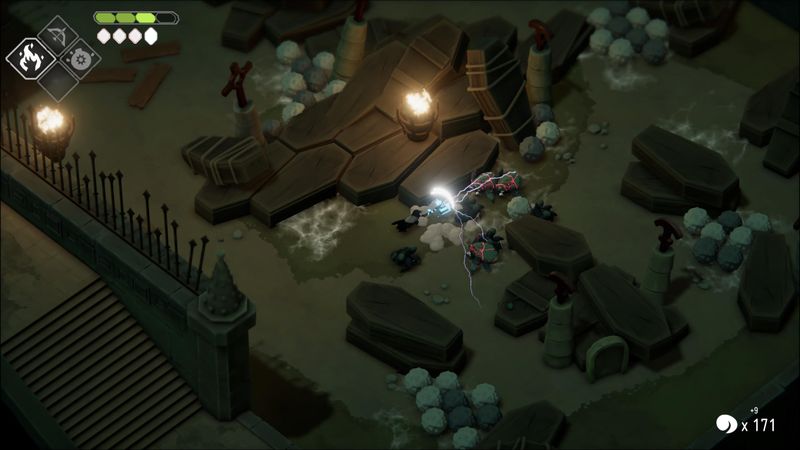 With every hit you land you really feel the connection of the attack. The combination of sound, light effects and DualSense haptics make for gameplay feedback worthy of a Souls game. It’s thoroughly addictive enough that you forget that defeating enemies yields souls for upgrading your stats.

There are plenty of enemy types, which increasingly require more thought and learning to dispatch. Possibly the only thing missing from the combat is having enemies with unique conditions to quell. Specifically, none of the enemies require anything more than your initial sword and bow spell to beat. It could have been nice to make greater use of the games other spells.

The player must advance with limited health from a door portal connecting to the hub world. Similar to a Souls game, the player must unlock shortcuts back to that checkpoint, which you’re returned to in the event of death. The process is familiar and challenging, but Death’s Door executes it without being unforgiving. 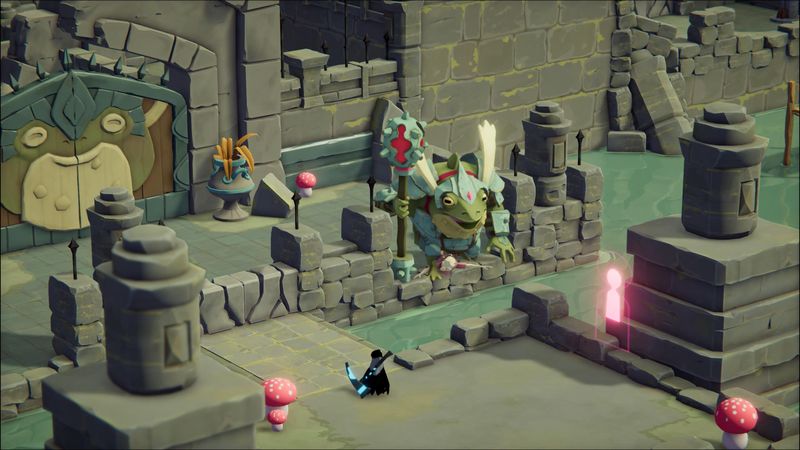 In fact there it would be extremely difficult to point out any point in the game which was remotely tedious. There are many deaths and many puzzles to wrap your brain around, but never is there a moment where the overcoming the challenge is anything less than a thrill.

Soul Of A Reaper

The plot follows our silent crow friend on a request to retrieve a soul, before the soul is nabbed by another older crow. Beyond the World of Doors, crows are mortal in the world of the living, and require the energy of souls to return.

Upon finding the older crow, the player discovers that this fellow reaper wanted the soul in order to open a door, where he believes his long sought target resides. This is where the main plot begins. In order to aid this long exiled crow, you must track down three giant souls. These souls belong to beings that have long evaded death. 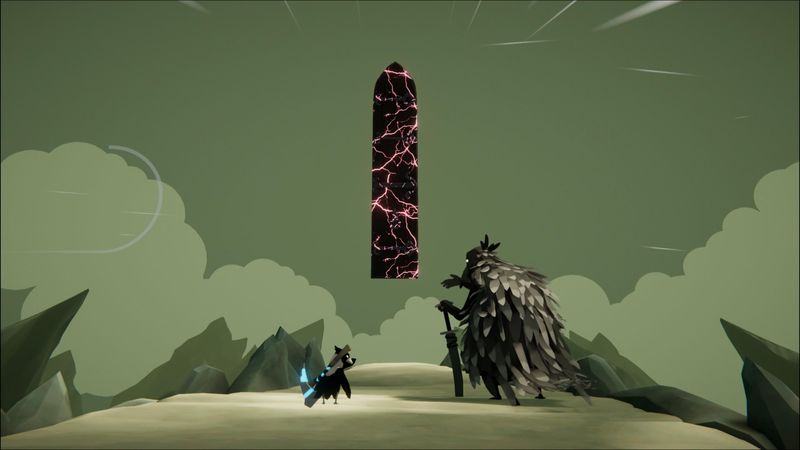 On this pursuit you discover a wider mystery surrounding an off-balance between life and death. While Death’s Door isn’t a plot heavy game, it’s delivered in such a way to keep its relevance fresh on your mind while you through ruins and witches laboratories.

The journey chances upon many interesting characters that provide light comic relief, the non-subtly named Pothead chief among therm. There’s an enjoyably light tone to most of the dialogue, despite the fact that it’s often in stark contrast to the darker tone of plot. Ultimately the balance works nicely over the top of an intriguing plot line.

Death’s Door is a game that doe so many things right, and this most exemplary in its dungeons and bosses fights. The level design of each is sublimely unique, featuring different elements and making use of your new items to solve the puzzles within.

Best of all are the excellent boss fights. There are a number of sub-bosses, enemy hordes and dungeon bosses that will prove to be a memorable scalp. Not just because they are entertaining unique gameplay experiences, but because of the sheer amount of time you spend on them. Most encounters will require an intense of concentration and “gittin gud.”

There’s nothing better than having enjoyed a fantastic main campaign, only to discover there’s endgame content. In Zelda fashion, players can back track through the semi-open world at any point with their new gear to find optional items and upgrades. However, at the end of the game, a new night-time mode can be unlocked to find even more secrets, and eventually a secret ending to the game.

It’s the perfect send off for a hell of a thrilling indy title, and gives an extra cherry for completionists . A Platinum Trophy might be possible from just one playthrough, but Death’s Door is great enough that you would be happy to give it at least one more bash for the honour.

More than just a Zelda clone or Soulslike game, Death’s Door is a real indie treasure. A “git gud” game never has never had such a welcoming appeal. With simple, accessible game mechanics that are fine tuned to perfection, and a challenge by all measures, Death’s Door has something for a wide variety of players.

While it is definitely a game that lives within its budgetary means, it excels and transcends those limitations. Warm visuals, endearing characters and a stirring plot complement many memorable gameplay experiences.

It’s everything you could want, and you could only really ask for more of it. At low price point, and a free copy of Titan Souls, you’re missing out if you didn’t preorder Death’s Door for PS4 and PS5.

Death’s Door is out now for PS4 and PS5.

Death's Door is everything you hope to get out of an indie game. An addictive challenge, an intriguing little tale and enough content to keep you going back. Unhindered by budgetary restrictions, Death's Door delivers on all fronts. The gameplay feedback from combat is implemented so well that you forget just how simple it is. Better still, it's made all the more excellent by the DualSense controller. Fans of Action RPG's will not want to miss this indie treasure on PS5.