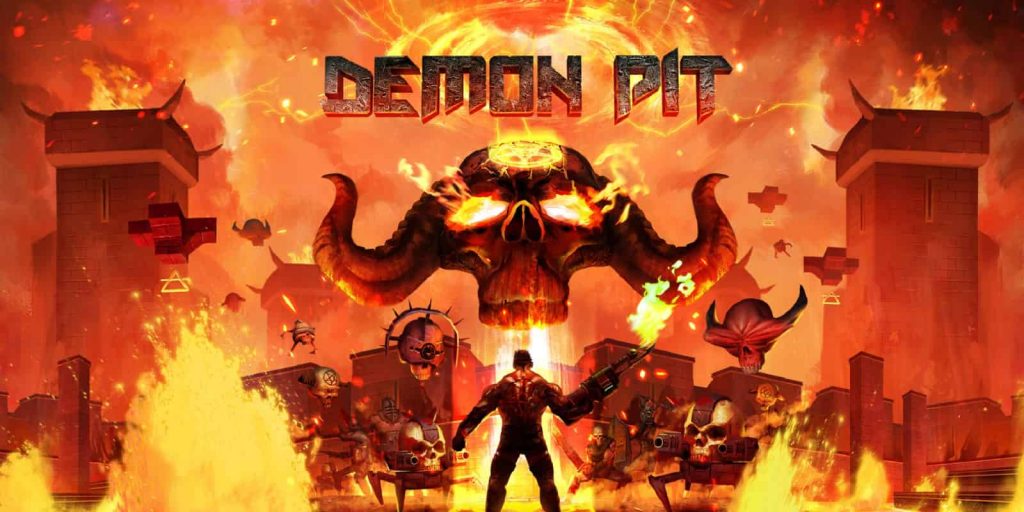 There’s a reason why folks of a certain vintage envy id Software’s Quake series; there is a very bespoke sense of frenetic shooter action present in that 1996 classic that just hasn’t been replicated in the contemporary genre offerings of today. Attempting to do just that is Demon Pit, an arena based first-person shooter that has designs on capturing the essence of id Software’s 23 year old classic, but yet ultimately stumbles on account of a desperately limited offering.

There’s nothing remotely complicated going on here – all you need to do in Demon Pit is simply fight through wave after wave of increasing numerous and difficult hellish hordes, racking up as much score as you can along the way while the arena itself presents new traps and obstacles to overcome. That’s it. That’s the game. There are no other modes, no story campaign and no multiplayer. Demon Pit is simply an arena based shooter and that’s your lot.

As purely just an arena shooter that can be picked up and put down just as quickly then, Demon Pit acquits itself fairly well as bite-sized entertainment. Chiefly, this owed to the simplicity and the accessibility of the whole affair. With just a minimal number of controls at your disposal (shoot, jump, move and grapple), Demon Pit ingratiates itself ably to those for whom time is an absolute premium.

Theres a certain floatiness to Demon Pit’s controls too, as with an ‘always run’ option seemingly enabled (though not visible in the options menu), movement in Demon Pit feels more like a spirited glide rather than the sort of determined trudge you might expect to see in other shooters. In truth, this sort of traversal works well, as you are able strafe and dodge incoming enemies and their projectiles with relative ease.

Elsewhere, the grappling command arguably sits at the centre of the game, as special runes can be grappled onto from any point on the map, pulling you from one place to another at extreme speed (and often plucking you right out of the bosom of danger at the very last moment). In the later levels being able to grapple effectively from point to point becomes a necessity, thanks in no small part to an increasingly fiendish array of lazer traps, lava floor traps and, well, lots of other traps too.

Killing enemies consecutively before an intermediary timer ticks down results in a combo meter being racked up which in turn provides you with additional score, cementing Demon Pit’s old-fashioned score chasing credentials while working in tandem with the aggressive level design and enemy waves to make it quite the furious genre effort indeed.

However, the fact that you only have a single life means that once you bite the bullet, you must tackle the whole thing all over again from the very first wave. Normally, such a mechanic would result in bouts of pad-chewing frustration, but thanks in no small part to Demon Pit’s bite-sized aspirations, it isn’t quite the dealbreaker that it might otherwise be.

In terms of its fundamentals, Demon Pit is strictly a no-thrills affair. The enemies are a derivative bunch made up of a bunch of D-list goons that look like they failed a Quake audition 23 years ago, with all the usual satanic floating skulls, undead knights and gun-toting shamblers counted among their number. Faring better are the firearms, which include all the usual suspects such as pistols, shotguns, machine guns, plasma cannons and more which all give a satisfying account of themselves when fired.

Audiovisually, Demon Pit leaves much to be desired. That blocky, obtusely polygonal look which served to separate Quake from titles such as classic DOOM and Duke Nukem 3D back in the day is in full display here, but both the arenas and the enemies you face are very basic looking, and find themselves bereft of any sort of artistic flair or sophistication. Equally, the sound work is rudimentary too, wth a distinctly one note soundtrack complimented by a range of stock sound effects that fail to either inspire or enthral.

It can be an addictive little score chaser certainly (and ironically would have made prime PS Vita fodder), but beyond that, Demon Pit has little else to offer than to dutifully occupy those odd-shaped intervals that exist between bigger and better games in a workmanlike fashion.

Demon Pit is out now on PS4, PC and Nintendo Switch.

An enjoyable enough bite-sized FPS offering, Demon Pit simply doesn't do or offer enough to hold attention in the long-term, as its presentation, firearms and enemies all feel like discount versions of greater games that have come before it.