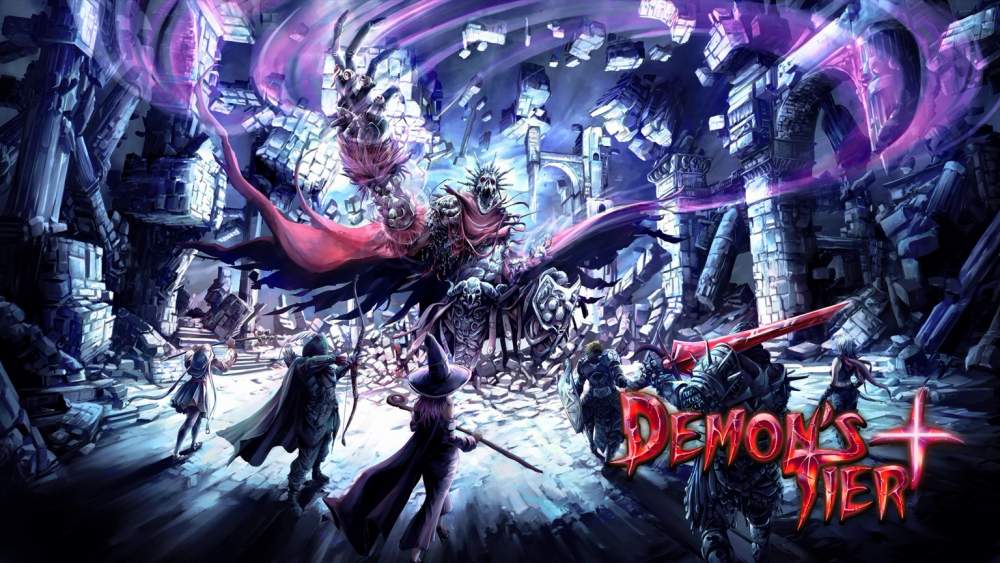 Demon Tier+ may sound like a way to rank your favourite demons but fortunately, it is anything but. I had honestly never heard of the game until I was presented with the chance to review it. After watching the trailer and at about five seconds in, I knew I had to play it. I am so glad I did too. I love a roguelike. I love good pixel-art and this game was so much fun. It never overstays its welcome, it’s never convoluted or bloated and the game is a near-perfect, arcade, dungeon-crawling timewaster. It’s brilliant and it is even available on the PlayStation Vita, remember that?

As you can probably guess, Demon’s Tier+ is a randomly-generated dungeon crawler with roguelike elements. You are part of a band of heroes. You can pick from many classes such as a Cleric, Wizard, Knight, Archer, they are all comically generic, which I liked. I love how brash the Berserker is and how the characters interact as the story unfolds. Your job is to descend into the depths, defeat an all manner of vicious beasts, and uncover what happened to the old king and his grand-daughter.

While the story and characters aren’t the most unique, the way that story unfolds between the stages of your many runs through the dungeon, is quite well done. Each run you have reveals a bit more information and does add a bit of weight to your constant killing and looting. Adding to this, there are three tiers to the game and each one has an alternate ending. So while the story may not be groundbreaking, it is a nice little distraction while you play through the game.

Demon’s Tier+ has a very satisfying, well-designed gameplay loop. You have a quest on each stage to complete, whether it is kill everything, loot all chests or find a hidden enemy. It makes every stage feel different and that leads me on to another fun element to this game. You are against the clock in every stage. I normally hate time limits but it is implemented really well here. It’s not overly restrictive but just makes sure you are not dawdling and keeps on the edge of your seat. Take too long completing your task and the reaper will chase you down.

A Great Roguelike That Gives The Player More Control

One of the things I think puts people off with roguelikes is the batshit mental amount of randomness. What Demon’s Tier+ does really well is place some of that random carnage back into the hands of the player. Rather than depending on random drops for health or damage, the player is free to choose how they would like their character to progress, essentially negating one of the reasons people dislike the genre.

Yes the levels are still random, yes the enemies and quests are random, but the things that really affect your runs through the game are completely within your control. So many times playing roguelikes I was too weak or did not have enough health and due to it being out of my control, it sometimes felt unfair. If you are too weak or do not have enough health in this game, well that’s on you and your bad decision making.

During each run, you gain two currencies. Gold is the first, which can only be used inside the dungeon and it can be used to upgrade your stats between each stage. You can pick more health, more damage, more defence, longer attack range and a few other categories to boot. It’s a brilliant system that made me feel like I was more in control of my destiny than most games of this ilk. I was never frustrated by random drops and always felt I was progressing nicely.

The second currency is D-Tokens, which is your persistent upgrade currency. You always start in the game’s hub, as with most roguelikes. In this hub you can spend your D-Tokens on new characters, weapons, and consumables to use in your future runs. You can craft weapons if you have found the blueprint, you can only buy things if you escape with your D-Tokens though and if you die in the depths, you return with nothing. Luckily it seems the developer may be a Dark Souls fan as you can return to your grave in the next run and save your precious loot. “Praise the sun”.

I really loved this gameplay loop, whether I used my tokens for new weapons, new characters or consumables, I always felt, even if I had a bad run, that I was constantly edging towards completing the game for the first time. The consumables you can buy are things like potions, which you can carry three of. Ropes can be bought, which are used to escape the dungeon with your D-Tokens intact. They are good if you are near death and want to keep your spoils. You can also buy silver keys to rescue prisoners from the depths.

A Problem Shared Is A Problem Halved

The silver keys you can buy before each run are very important. While you can find bronze keys within the dungeon for the large chest on each level, the silver keys are used to free prisoners you can find scattered through the game. Once free these prisoners act like companions and help massively with thinning out the waves of pixel-based terror coming at you. They are really helpful with bosses and the later stages of the game where firepower is key. You can even have another player jump in and help in co-op which is a nice touch.

The achievement list is a nice one too, not that most people care but I do like a nice list to work through on a game I am enjoying. In Demon’s Tier+ you will not have to stray too much from just playing the game and you will not have to grind much at all. Just complete each tier of the game and you will nearly have everything you need for that nice shiny platinum trophy. I have just a few trophies left to acquire and I have only been playing just over a day. As I said earlier in the review, the game never overstays its welcome and by the time I finish the trophies, I will have had enough of the game. Perfect.

Demon’s Tier+ looks and sounds exactly as you think an indie roguelike game would. It has lovely pixel-art, nice 16 bit cutscenes, nice pixel character models and a quaint soundtrack. I liked both and they work well together but as we all know, pixel-art and old-school soundtracks are not to everyone’s taste. This kind of game presentation reminds me of simpler times, running home from school to play on my Megadrive and not worrying about how crap the world is.

One of My Favourite Roguelikes In Recent Memory

I have played, reviewed, and enjoyed many roguelikes recently, but this one is one of my favourites. From its well designed, no-hassle gameplay loop to its player driver upgrades, this game makes sure you never get done-over by the randomness normally marring roguelikes but keeps enough of it to ensure that game can still be fresh with every run. The gameplay is fun and it does not take to long to complete a run through the entire game. It has a nice trophy list, a nice feeling or progression, and you never feel stuck behind a randomly generated wall.

Demon’s Tier+ looks nice, sounds nice, performs perfectly and I adored it. It’s frickin’ brilliant. Can we have more arcade roguelikes like this, please? It is cheap, fun and does not require hours upon hours of your life. What more could you want? Right, I need to get back to it, grab those last few trophies to cap off a very fun and surprisingly excellent experience.

Demon’s Tier+ is out now for PS4 and PS Vita.

A roguelike that gives the player this much control over their character build is a rare thing. Rather than depending heavily on random drops and loot, Demon's Tier+ lets you spend your gold on what aspect you want to improve. It's a small change that makes a massive difference. Along with that, you have a well-designed game that runs really well, not too long, and has a really nice trophy list. What's not to love?