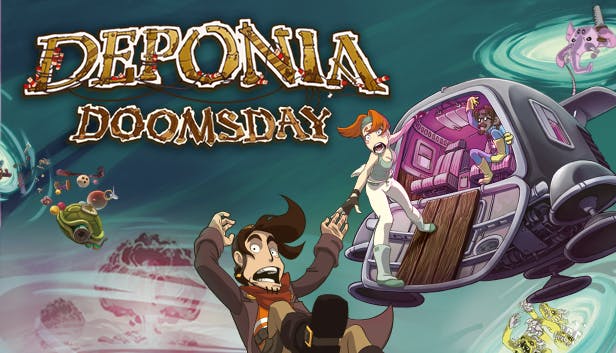 There was a time during my younger years where I played nothing but point-and-click adventure games. I remember playing classics like Monkey Island, Day of the Tentacle and many of the other Lucas Arts adventure games of yesteryear.

Though some of the old point-and-click classics have been released on PS4 in recent years, such as Grim Fandango and Full Throttle – alongside some new titles including Broken Age and Contrast – their popularity appears to have dwindled.

Step forward, Deponia Doomsday, the latest game in this niche genre that hopes to create an impact.

As the fourth title in the Deponia series of adventure, let’s take a quick look back at the overall story in case your unfamilar. In Deponia, you play as Rufus, a sort of anti-hero who has literally the worst luck of any character I’ve played in a videogame before. He is an imbecile who really should not be allowed to touch anything or go anywhere. He is a walking accident waiting to happen.

You live on Deponia, a planet which was originally largely populated by humans – that was until a large amount of the population ascended to a utopia of a floating city called Elysium. Over many years the Elysians forgot about the world below and thought it uninhabited. The world below fell into squalor and was used as a dumping ground by the populace above. The lower citizens struggled and did what they could to survive.

I will not spoil the main plot points from the previous games, just in case you are yet to play them, but the games mainly consist of Rufus trying to get to Elysium, failing miserably and upsetting a lot of people on the way. Deponia Doomsday, however, does take quite a different angle storywise to the first two games.

Rufus wakes up from a nightmare where he was old, blew up Deponia and had a moustache. That last point really bothered him. He soon upsets his girlfriend, meets a time traveller and the whole world descends into chaos from there. One thing I learned while playing through this story was; you should never let an idiot travel through time. You are just asking for trouble. Like other games in the series, the story of Desponia Doomsday is well written, funny and this one is full of references to other time travel stories.

Gameplay-wise, Deponia Doomsday is very similar to the previous entries in the series. You move around interconnected screens, picking up items, talking to NPCs and solving small puzzles. One thing I did notice about this iteration was that there were QTEs to complete and there seemed to be more gameplay variation overall.

More minigames and puzzles are present to break up the traditional point-and-click gameplay, which provides a more varied experience. Nevertheless, you’ll still be combining items, giving items to NPCs and using items on objects to further your progression. Unlike a lot of point-and-click games, most of the objects’ functions make sense and it’s quite natural to progress through the game.

My favourite thing about the Deponia games is the dialogue and general comedic feel to them. These titles do not take themselves too seriously and they really make me laugh in places. Deponia Doomsday is no different, with cool easter eggs, references and rude jokes that litter the dialogue and storyline. I often chortled to myself after a dirty joke or a stupid reference and I really enjoy that the game is quite often ridiculous.

A Sight for Sore Eyes

I love the art style of the Deponia titles and the newest instalment is no different. It has a very clean cartoon look to it, the animations are very well done and the scenery is beautiful. It’s got a hand-drawn look to it and it’s very pleasing on the eye, so it’s a pleasure moving between screens to see new locales, meet new characters and take in all the well-drawn artwork.

The cutscenes adopt the same level of quality too, all well rendered and very well animated. The artwork operates hand-in-hand with the comedic nature of the story and characters. It’s very tongue-in-cheek and silly and fits the style of the game very well.

Sound-wise Deponia is good too, with some excellent voice acting. Rufus especially delivers his lines with impeccable timing and delivery. The music is decent too, albeit a little unremarkable, but it does a good job at keeping you grounded in the world of Deponia.

Firstly, if you liked any of the previous Deponia games you will love this one. I preferred the story over any of the entries I have played so far. I like the time travel angle a lot and the story is very engaging throughout. The artwork, characters and dialogue are excellent, and the art style is beautiful, clean and colourful.

The comedy dialogue and nonsensical storyline are consistently entertaining too. I laughed quite a lot as the game’s silly sense of humour is right up my street. We have too many serious games at the minute and a little injection of silliness provided by Deponia is a welcomed one.

The style of gameplay won’t suit everyone, but it’s nicely broken up by minigames and puzzles. If you’re looking for a goofy, humorous point-and-click game then look no further than Deponia Doomsday, which proves to be yet another entertaining experience in the series that benefits from taking a slightly new direction.

A funny, silly temporal romp that is well made and well executed. Any fan of point-and-click games will enjoy Deponia Doomsday. It has a light-hearted, comedic storyline that is well written and well performed. The art style is lovely and the game performs to perfection on a technical level.