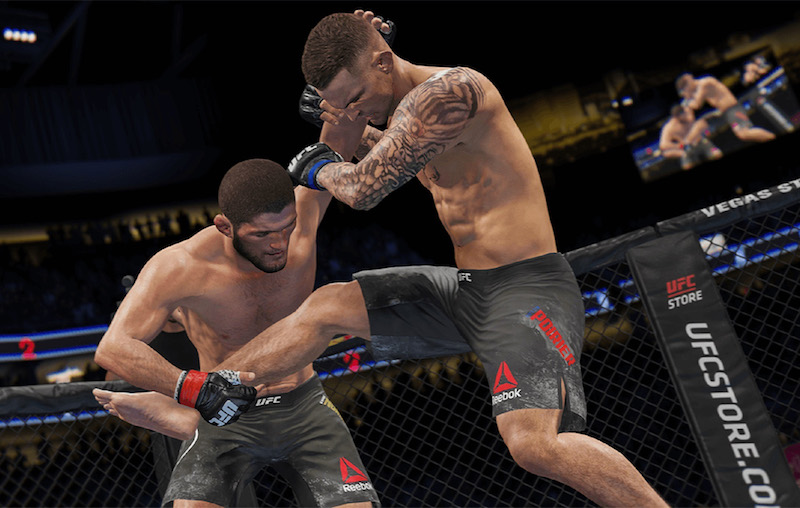 EA Sports UFC 4 PS4 Review – For casual onlookers of Mixed Martial Arts (MMA), it can be difficult to separate the brutal spectacle from the onion layered complexities and sophistications which underpin modern mixed discipline hand-to-hand combat. In spite of the at-a-glance optics that Dana White’s small army of tattooed, 3% body fat fistic killers might conjure, MMA is at its most fundamental a chess game of towering guile and intelligence played with blood, sweat, fists, elbows, knees, feet, arms and legs.

So it is then that EA’s fourth attempt at capturing the strategy, grit and crowd-pleasing ferocity of MMA proves to be its most successful yet; neatly shedding its skin of what didn’t work before all the while embracing an evolved feature set that cements its position as the best MMA videogame on the market.

From the get go, big changes are apparent. Immediately tasking the player with fashioning their own fighter, UFC 4 isn’t prepping the wallets of weary gamers for the sort of pounding that the microtransaction heavy Ultimate Team mode inflicted in the previous game, but rather the creation of a persistent customised fighter where everything you do, both online and off, provides experience points and coins that can be traded in for flashier cosmetics, emotes and more in UFC 4’s fighter hub.

While the option does exist to purchase experience points, such a option merely exists for the impatient as UFC 4 provides a multitude of easily completed daily challenges to earn experience points hand over fist. Most importantly though, no longer is your wallet the measuring stick for your competency in the octagon – and I couldn’t be happier to see the high grind, low reward shenanigans of Ultimate Team be given the boot for this year’s game.

While we’re talking about key changes to the very fabric of the EA Sports UFC series, EA has wrought another – the submission system has been entirely overhauled in ways that bring a tear to my eye. No longer a maddeningly imprecise mini-game requiring you to have four thumbs, submissions in UFC 4 are now much simpler to both attack with and defend against.

Deep Enough For Pros And Welcoming Enough For Complete Newbies, UFC 4 Is The Most Accessible The Series Has Ever Been

Now, all players need to do is move their circle over that of their opponent to tighten a hold, or simply shift it away in order to try and escape. Much simpler to understand and effortless to execute practice, UFC 4’s submission system is further augmented by other excellently conceived mechanics too. Players who are defending a submission hold now can elect to punch their foe whilst fighting the hold in order to relieve the pressure, or in some select holds, do what Rampage Jackson did to Ricardo Arona in PRIDE – and simply just slam them out of their mind to break the hold (and maybe their skull in the process).

Beyond the gratefully reworked submission system, EA’s commitment to making the ground game as a whole much more approachable and easy to learn is also on clear display in UFC 4. In this year’s game players now have the option to toggle HUD grappling assists which not only help with understanding how and when to block the grappling transitions of your opponent, but also support fresh-faced players make the correct tactical choice on the ground without being blinded by BJJ and wrestling jargon.

The way that EA have achieved this is that rather than listing the technical names of each position on the ground that you might transition to such as half guard, full guard and so on, only three different choices appear on your HUD now – getup, submission and ground and pound. What this means is that whether you’re on top a foe or underneath them, you’ve always got a clear goal that you can push towards and for newbies who might have been easily intimidated by the ground game of previous EA Sports UFC games, this is an absolute godsend that makes UFC 4 that much more accessible as a result.

Speaking of accessibility, this is very much something that can be glimpsed in other aspects of UFC 4’s digital representation of fisticuffs too. Much like the submission system, clinches and takedowns are both now much easier to both pull off and defend against. Underscored by a new momentum system that allows you to drive forward on a takedown to either complete it, or push a foe up to the fence, or which also allows you to break a clinch by simply retreating your way out of it, UFC 4 doesn’t just feel easier to play than ever before, but it absolutely nails the look and feel of the world’s most sophisticated combat sport too.

The striking game has perhaps seen the least improvement but then there was very little to meaningfully improve in the first place. Indeed, much like the previous EA Sports UFC title the striking game in UFC 4 remains a delectably enjoyable prospect. Range-finding and combo-interrupting jabs remain as satisfying as ever, while slipping punches and delivering a concussive counter hook, or devastating your foe debilitating with wicked leg kicks feels as great as it ever did. If MMA is human chess, than UFC 4 does a great job teaching them all the rules in a way that is both comprehensive and easily digestible.

Away from the nitty gritty of its violent spectacle, UFC 4 also brings a hefty number of choice modes to the table as well. While the instantly gratifying delights of the ”fight now’ exhibition mode returns from previous games, EA has also reworked its Knockout and Stand and Bang modes from UFC 3 into something a little different. Leaning into something a little more exotic than the relatively manufactured UFC arena settings that we’ve been used to over the years, players can duke it out in dusty backyard fights or in a thai-boxing fight pit that looks like something out of the Van Damme kickboxer films rather than a realistic fight setting.

Representing more than just a cosmetic departure from the usual arenas, these striking only modes swap out the limb damage and deep grappling systems of the main game for something that resembles an arcade brawler where each fighter has an energy bar and once that energy bar has been depleted from strikes, you lose to the person doing the hitting. Sure, it’s simple stuff and while the arenas could do with a bit more polish thanks to their flat lighting and rudimentarily detailed backgrounds, it still makes for an entertaining diversion all the same.

Arguably though, the biggest strides that EA have made with its offline mode offerings is with the reinvigorated career mode. Once again telling the story of a rookie fighter looking to make it big in the octagon, UFC 4’s career mode is told in a non-linear fashion as our fighter reflects back on his previous fights with his coach as he or she builds his way up to big time, fight by fight.

Doubling up as an effective tutorial for UFC 4’s fundamentals, the career mode also boasts its own share of sophistication too. As before training camps and hyping the fight both have to be planned in advance of the fight. The thing is, there is sufficient latitude for risk and reward as well. For example, when you’re training your kickboxing you could actually end up knocking out your training partner at the start of an eight-week training camp, thus making them unavailable for the remaining time before the fight.

More than that, having a successful training camp is all about balance. Each time you accept a fight you are given a set number of points to use in each week leading up to the fight, making the decision to split those points between training, bringing in another fighter to teach you some new moves and hyping the fight. Despite seeming like a tedious micromanagement activity, UFC 4’s career mode is anything but as it’s light and entertaining narrative, fun fights and intriguing encounters urge you to move from one fight to the next in a way that UFC 3 just wasn’t able to achieve.

And then finally, away from the offline modes, we have the new Blitz Battles online mode which makes its debut in this year’s game. A refreshing addition to the other standard online modes, Blitz Battles keep things fresh by changing the ruleset from round to round, forcing players to adapt on the fly in a way that they just haven’t had to do in previous games. Don’t worry though – if the notion of rotating rulesets causes your eyes to roll into back of your skull, all the usual static competitive quick fight, tournament and online world championship modes are still available. Put simply, EA haven’t skimped on the online side of things at all.

Audiovisually, EA have also upped their game with UFC 4. The character models are not only the best that they have ever looked, but the improved animation blending makes every takedown, slipped strike and clinch trip look far more authentic than in previous games. Equally, as with the previous game, PS4 Pro owners can again toggle visual settings that favour either resolution or performance respectively. And as before, the choice is absolutely clear cut as performance mode sets a 60 frames per second cap which makes the game feel both much more responsive and satisfying to play. The difference is quite simply night and day.

When it comes to the audio side of things, the punches, kicks, knees and takedowns all sound great (and are especially exaggerated in the Kumite themed knockout mode). The commentary too is entertaining and responsive to exactly what’s happening on the screen, but not having Joe Rogan’s excited tones underscoring each bout feels a little odd to say the least, though his replacement in former two-division champion Daniel Cormier, manages to step into his shoes well enough with a fusion of amusing banter and insightful fight criticism.

With it’s newfound and much welcomed focus on making the game easier to play, hopefully EA Sports UFC 4 can finally secure the wider mainstream audience that it so richly deserves. With it’s reworked submissions, easier to pick up grappling and much better rounded offline and online mode offerings, this one isn’t just for the fighters, it’s for everybody.

Without a doubt the best MMA videogame ever made, EA Sports UFC 4 supplements a welcome array of new offline and online modes with a revamped and endlessly sophisticated combat system that everybody can enjoy. For MMA fans it doesn't get any better than this.