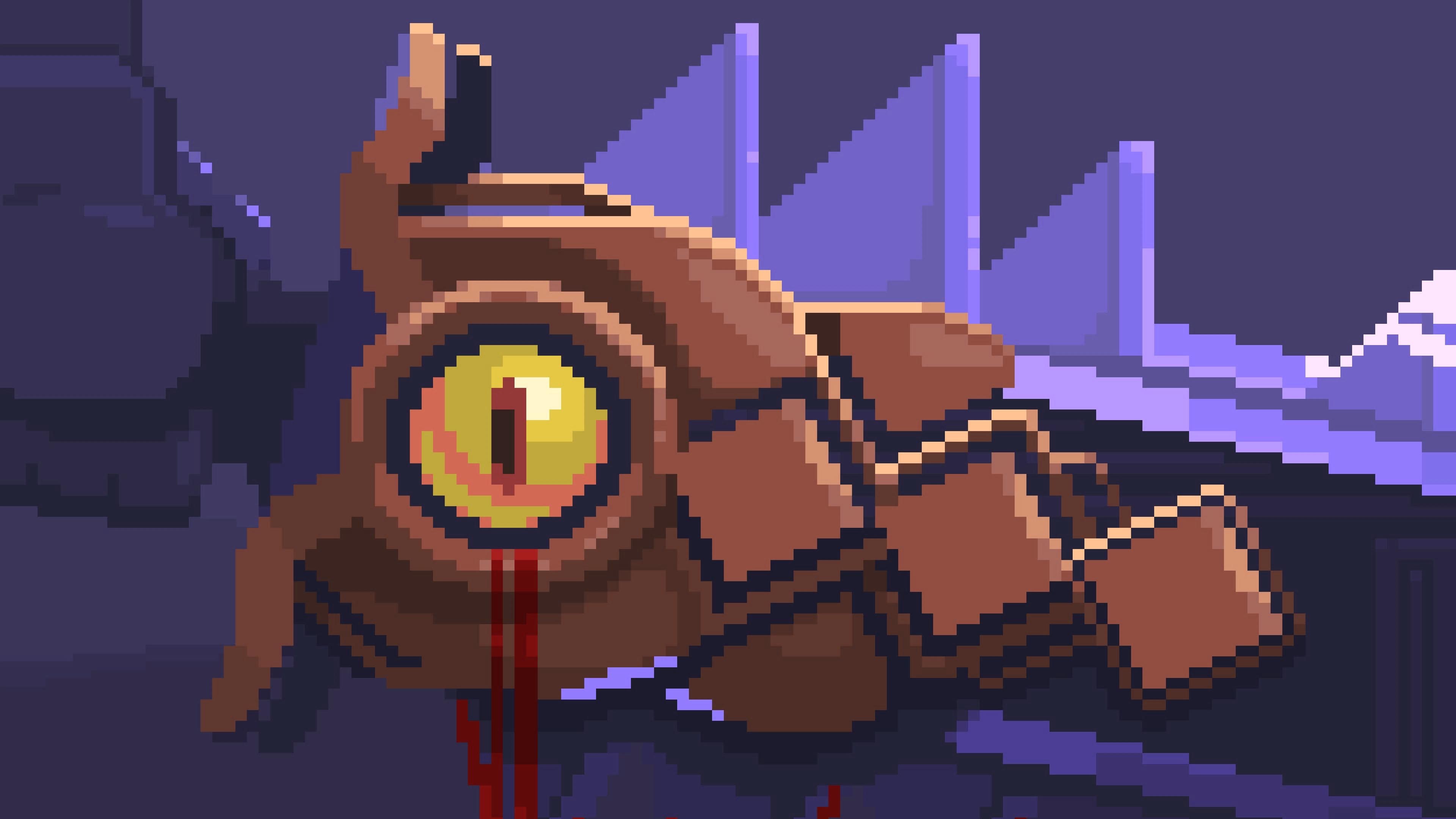 Eldest Souls Review (PS5) – If you’ve ever doubted the impact that Dark Souls has had on the industry, consider the fact that the word ‘Soulslike’ is now used as a descriptive term to define many games, including today’s main topic, Eldest Souls. However, developer Fallen Flag Studios takes that term one step further by emulating Dark Souls both in name and somewhat in its visual inspiration.

What follows is an interesting indie game with a gripping world, but frustrating gameplay that often feels entirely unbalanced, slow, and tedious.

One aspect about Eldest Souls that is immediately different from the Souls games is that you’re not in a realistically designed world, but rather a pixelated one. In addition, you also have a top-down view rather than the camera being behind and above the player.

It’s a different style of play that does give Eldest Souls its own unique pull, but we’ll get to the ins and outs of gameplay later.

The pixel art on display in the world of Eldest Souls is one of my favourite aspects of this game. Exploring the world in between the boss fights was always intriguing, and felt very Soulslike as the environmental storytelling is well executed. It felt familiar and totally new at the same time, which is exactly how I want to feel when I’m playing something inspired by another game or franchise I love.

Your characters’ slow pace isn’t at all welcome in combat, but calmly walking through the desolated Citadel, discovering hordes of citizens frozen in place, or finding soldiers scattered and bloody across an abandoned battlefield made everything around me sink in to greater effect.

The NPC’s you meet are also wonderful additions to the world, further grounding the setting and also bringing some of the classic Souls NPC quirkiness into the mix.

Overall, the setting and visual design of Eldest Souls is a welcome relief from the intense boss battles, since I thankfully didn’t have to worry about any enemies on my way back to the boss each time I died. It was in those moments that I truly found myself enjoying the game the most, intrigued by the lore of the world and trying to fit the narrative together.

I’m Here To See The Boss

Game development isn’t easy to begin with, and though I know nothing about it, a part of me figures a boss rush game is a special kind of challenge. You won’t have the same variety you do in a game that has you fighting weaker enemies and a boss at the end of each level or section, so the fights you do have need to be very well designed and executed.

Eldest Souls has a total of eight boss fights across nine bosses (one fight is two back-to-back), and while I wouldn’t say they’re all poorly designed, some are very clearly better than others.

Many of the bosses were clearly inspired by those faced in Souls games, such as the Guardian Knight, inspired by the Tower Knight in Demon’s Souls. As a veteran Souls player it is definitely nice to be able to notice these references, though I do think that designing some of the attacks and cadence of the bosses based on the fights that inspired them was a mistake.

In a game already trying to partially copy something else, having the attacks I faced not be unique seemed like a step too far.

Some fights however worked really well, and felt very intense. I particularly enjoyed fighting Azikel, the God of Light and Eos, the God of Unity. Even the aforementioned Guardian Knight was a fun and challenging fight.

These encounters weren’t easy but each failure felt like it was my fault, and with every fight my awareness and skill at combating their attacks improved until I overcame them. It’s immensely rewarding, and is comparable to how it feels when you overcome a difficult boss in any challenging game, though in this case especially Dark Souls.

The other fights, however, felt very different. It’s here where the balance issues start to come into play. While you can die very quickly if you allow yourself to be hit two or three times in a row, that health can be gained back with a charge up attack. If you’re careful, you can continuously gain back any health you lose by spamming your charge attack and of course, not getting hit.

There’s no protective armour or shields, and being able to refill your health bar in perpetuity does sound like a fair balance but rarely did it feel like that even mattered.

Every boss has multiple area-of-effect attacks, which they like to stack one on top of another. This would be fine if you had a way to avoid them, but a countless number of my deaths were unavoidable as I would just get hit with a string of attacks that cover the entire boss arena.

My success in those fights and thus most of the game was determined more by how the boss AI decided to act rather than my own skill and game knowledge. This kind of imbalance made most of the fights feel like I was just scraping by on random luck, frustrated to no end until that final, lucky blow.

There’s Gotta Be More To It Than That…Right?

Part of what fueled the frustrations I felt was the fact that every time I went back into a fight, I felt very limited in how I could differ my approach. You have three different classes which you can dump skill points in, though you may only be actively using one class at a time.

Each victory over a boss grants you a shard that you can infuse into your blade to make it stronger, and carry certain after effects, but those never felt like a huge buff until the final boss fight where I could have each slot filled. Mixing around where each shard went would provide you with different after effects and buffs, but beyond that there was no way to alter your approach for each fight.

What really made it feel limiting however is that your actions in each fight can be boiled down to charge your attack, two more standard attacks and then a special if you can, then dash away from the oncoming attack. Those actions repeated ad nauseum will get you through each fight, no problem.

You really needn’t use any other strategy, so after dying multiple times, some cases unavoidably so, it becomes extremely tedious with each new attempt. Your standard attacks inflict too little damage to rely on them, so charging your attack and following up with a special is the only way to really do any damage.

However, what I find to be most egregious is how your stamina or dash is handled. You can only dash three times before waiting for a cooldown period unless you’ve executed a perfectly timed dodge at which point you can dodge once more without depleting your stamina. So, you can quickly dash a maximum of four times, which may sound like a lot but often wasn’t enough.

You’ll need to be dashing constantly in this game to avoid bosses attacks at times, and so much of the damage my character suffered came from attacks which were unavoidable because I was waiting for the cooldown.

It also didn’t help that two out of the three classes were offensive in nature, and only one was defensive, so any hope at protecting yourself when you can’t dash means you’ll be required to use that one class rather than experimenting with the other two.

While I appreciate Fallen Flag Studios doing their own personal spin on how stamina works within their Soulslike game, it more often felt like an unnecessary hindrance than a clever limitation to increase your gameplay experience or the game’s difficulty. I just couldn’t help but feel like a classic stamina bar is the way to go; it would have even been a welcome choice to have a shard that increased your stamina if infused in the right slot, for example.

It’s not exactly an error that you can only dash three times, but being caught waiting for the cooldown for the only thing you can do to avoid being hit (depending on your class) never felt good.

All these factors are what contribute to the overall experience being improperly balanced and frustrating, and ironically reveals just how shallow the gameplay is compared to the seemingly deep lore that surrounds these fights.

Never Shoot Yourself In The Foot

Eldest Souls does some things really well, and there’s a world here that part of me would love to continue exploring, but not if it means I have to fight all the bosses again. I doubt I would have seen this game through till the end credits were I not reviewing it, and don’t think I’ll be going back for more.

The few good fights there are just aren’t worth slogging through the rest, and the same unfortunately goes for the game world. The later areas become more interesting, though I won’t be putting in the effort to see them again because it isn’t worth the frustration.

I think that’s where it really fails at emulating Dark Souls most. Tough as those games are, another playthrough is always an inviting option because many of those boss fights are worth slogging through the game’s most difficult areas.

It may also seem like I’ve spent too much of this review comparing a top-down pixel art indie game to a realistically designed AAA medieval fantasy game, but Fallen Flag Studios invites the comparison at every turn, shooting themselves in the foot by doing so.

Maybe if I wasn’t reminded about Dark Souls everywhere in the game, I wouldn’t make the comparison as much. However, the simple truth is that we’ve seen games done in the style of Eldest Souls that invite the same comparisons and match up more equally to Dark Souls because they were able to capture the core tentpoles of Souls games within their own entirely unique style.

Eldest Souls is now available on PS5 and PS4.

Eldest Souls wears its inspiration on its sleeve, though in the end that counts for very little. The boss fights are often unbalanced and tedious, which only contributes to a frustration that deters you from wanting to pick the controller back up.