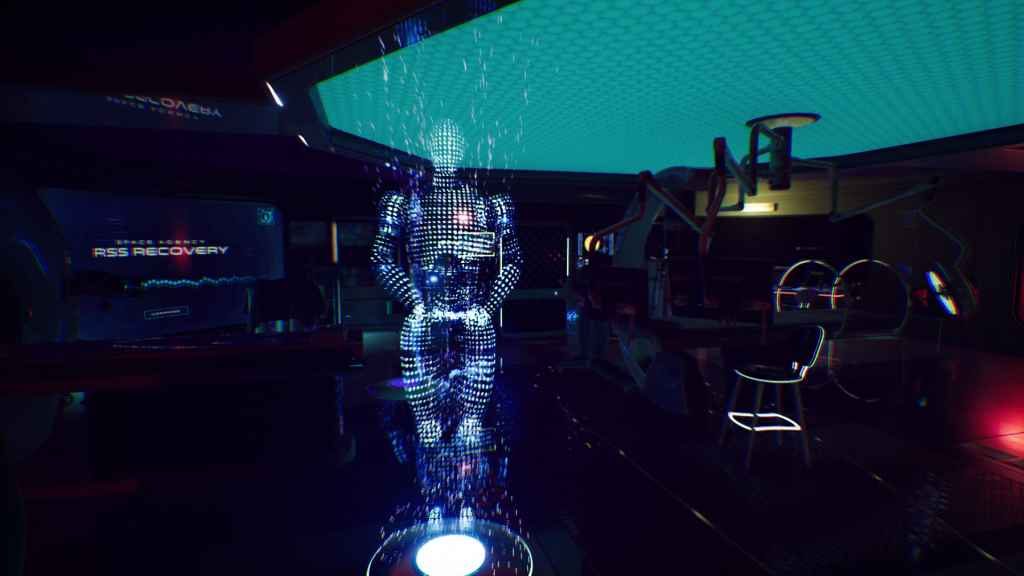 The line between the surreal and the inscrutable is entirely subjective. While some people might look at expressive science fiction material like that found in Elea and want to dig into meanings and messages, others might simply dismiss the entire exercise as obtuse. I fall somewhere into the middle of these two camps. While parts of Elea are intriguing due to the audacity of its presentation, I found the overall experience to be somewhat frustrating.

If Elea were a film, I might be more inclined to delve into its depths in search of the hidden truths that lie within it. But in the medium of games, such mysteries play differently. Elea wanders in circles, reveling in symbolic imagery and dreamlike events, all too often leaving me with the controller dangling from my fingers, wondering what on earth I’m supposed to do next.

Elea (full name: River Elea Catherine Jones) seems to be the primary character in Elea, though at some points in the game, I was unsure whether I was truly seeing from her perspective. While some might call Elea (the game, not the character) a walking simulator, I found it to be much more akin to a series of adventure game vignettes, each ending abruptly before swirling into the next.

In many ways, playing Elea was like being trapped in someone else’s dream. If you find your own dream-logic frustrating, imagine attempting to navigate through a that of a stranger.

Is There A Story In Elea? Maybe…

At the beginning of the game, a wall of text appears to explain that after a pandemic has rendered all of Earth’s children ultra-violent (and the subsequent cure makes them placid and without will), a ship is sent to a nearby planet to ascertain whether it is habitable. When that ship goes silent, a second ship is sent to investigate. It is implied that Elea’s husband was on the first ship, and that she will set out as part of the discovery mission.

The opening scene implies that Elea is undergoing some sort of memory erasure procedure, presumably to remove the memory of her family. You will notice that I am continuously using words like “imply” and “presume”. That’s because after that first block of text, nothing in Elea is ever stated outright. It is up to you to interpret scenes the way you wish. I often found myself wondering if I was experiencing the memories Elea was attempting to erase, or if I was simply jumping around in time through various pockets of Elea’s subconscious.

The player is ushered through a series of scenes, always needing to solve a puzzle, find a widget, or suss out the correct order of actions to take to move on. Some scenes are more lucid, like a segment in a very pregnant Elea’s home wherein she has a stilted conversation with her husband. Other segments are far more surreal, with levels of weirdness ranging from “Natalie Portman dances with her alien twin in Annihilation”, to full blown “It’s full of stars” geometric freak-outs.

In one bravura segment, the game forces the player to take the same action repeatedly, with slight changes to what they see and experience, before completely booting the player from the game to the Start menu. At first, I thought that I had encountered a game crash before I eventually realized that no, Elea meant to do that.

It is this sort of strange behavior that makes Elea both somewhat endearing and also beguiling. While I might not agree with a lot of the choices that the development team made with Elea, there is no question that they went absolutely balls out in pursuit of their vision, audience sensibilities be damned.

Unfortunately, this method of game development also left me feeling confused and drained by the end of Elea, wondering what the hell I had just experienced but without the energy to try an parse the answers.

I imagine that a certain type of adventure gamer will get a great deal of pleasure out of Elea; those same sadists that beat their heads against Hitchhikers’ Guide’s babblefish will probably love the tonal changes and beautiful visuals on display. But the mainstream gaming audience should approach Elea with wariness and care. This game is not what it appears to be on the surface, and what lies beneath Elea’s sci-fi veneer is a twisting maze with no clear exit.

Elea is now available on PlayStation 4.

Elea is a conundrum; a mirror-maze of beautifully rendered but almost indecipherable vignettes, tying together into an arc that is nearly inscrutable. Without a coherent story to tie them too, the puzzles involved become chores, and advancement becomes its own reward. Adventure gamers and fans of deeply surreal sci-fi might find things to enjoy here, but more casual players might want to look closer before buying.