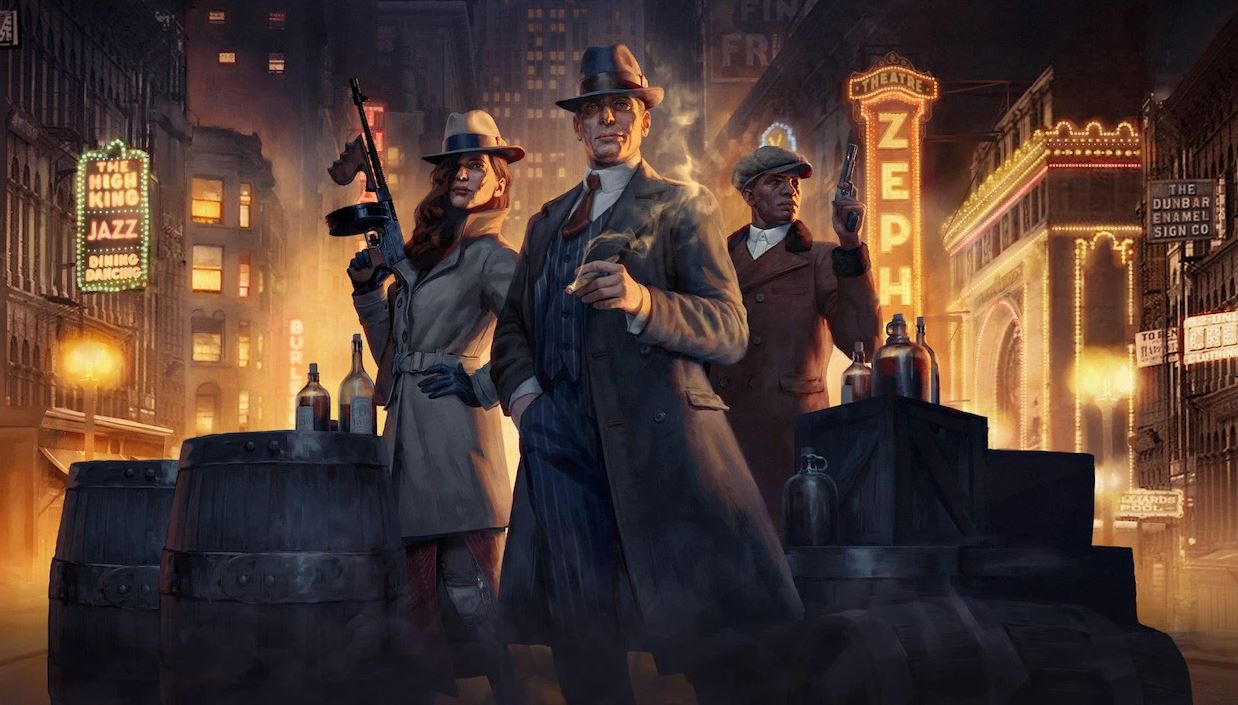 Empire Of Sin PS4 Review – After 12 months of game releases and a host of candidates launching at various states, I have to say Empire of Sin might be one of the most disappointing games I have played this year.

What is an interesting premise of growing your crime family, slowly taking over parts of a town and various boroughs is actually a bland management game, riddled with bugs and issues on PS4 and in such a state that now isn’t when you should pick it up.

A Sandbox Experience You Choose How To Approach

Jumping into Empire of Sin for the first time is one of the most jolting and “oh wow, ok then” experiences I have had in a game. The first thing you see after you click play is a character select screen, complete with the vast selection of mob bosses in the game to choose from and play as.

This was a bit jolting to start off with as I expected some kind of introduction to the world or a brief overview of 1920’s prohibition-era Chicago. But, nevertheless, I clicked on and found myself introduced to my first Mob Boss, Mabel Riley, who is the leader of the Alley Cats.

This intro scene is told whilst you are in a cab, driving somewhere and are given some dialogue options to choose whether to go straight home or head to a job which has just popped up, these and the finer details depend on what Mob Boss you chose, but I ultimately found this intro to be bland and disappointing. There isn’t much to the events that happen, and while the voice acting is of a good quality it didn’t leave a great first impression.

However, I will say, the choice of these different mob bosses are valuable, with each having their own perks and bonuses and as a result a different starting situation and events in their opening hours.

From there, you are greeted to the introduction of the game, taking you through all the management systems at play (of which there is a lot), from combat to deciding what liquor to sell at each of your rackets and bars and managing buildings.

And once that tutorial ends, which is about an hour, maybe a little bit more, the game lets you loose into its open-world to manage how you want. At first, this was a little jarring, but I actually grew to like this approach.

The one issue with this opening and the overall introduction to Empire of Sin is that the tutorials are far too short or don’t give you enough time to explore and learn them.

See, Empire of Sin has a lot of menus and a lot of systems at play that are told to you in one of two ways. They are either told through an arrow pointer or text on-screen (sometimes both) but you aren’t given the chance to mess with that system and change how it works. Or, you are given the option to change and alter the mechanic, but only briefly and not giving you enough time to acclimate to the system or learn how it works.

So ultimately I left the tutorial of Empire of Sin not really knowing what anything did or how to interact and manage my crime empire, which is a huge problem for a game with as many menus and systems that interact with one another or disparately as Empire of Sin has.

The actual gameplay in Empire of Sin is a collection of management systems, alongside some simple and far too easy combat. To start off with combat feels like a budget version of any tactical game you have played. It is simple, with only traditional moves. It is also far too easy and I never found much of a challenge when engaging in it.

When it comes to the management systems, I don’t know where to start. The core loop of the game involves you engaging in combat briefly when entering a building in Chicago, taking it over, and building up your empire. And, this repeats over and over again, relentlessly as you defend buildings and take over new ones creating a slog of a game.

This makes up the core of how you grow your empire, but as you do get bigger and bigger, extra activities and events will be introduced to diversify each run with a Mob Boss.

To start off with, you may have a “sit-down” with another Mob Boss, who will either offer you a compromise and strike a deal with your group or be hostile, at which point you can choose whether to give in or kill their leader and see the repercussions play out for yourself.

Other events can happen, such as a fight breaking out in the street or seeing a mob boss while you explore Chicago. You can also get summoned by a Mob Boss to go and sit down with them, at which point you have to get to their district and initiate the sit-down. The only problem is, I was never told how to travel between districts and couldn’t find out how to do so, before the mob boss got angry with me and then went out and started causing havoc for my empire, all because the game didn’t tell me something.

As you can expect, this wasn’t fun and was my first real glimpse at just how jumbled Empire of Sin is.

On top of this, managing systems becomes a cluster of trying to remember where they are in the menu wheel and fiddling with options until you eventually find out how to hire a Gang Member or change the liquor being sold in a specific location.

It just isn’t well thought out and I didn’t have any bit of fun or enjoyment playing Empire of Sin, as everything felt like reading a textbook to study for an exam in a subject you abhor.

Bugs And Issues Seal The Deal

If Empire of Sin ran well there would at least be something saving this experience, but right now it is a mess. Romero Games have said that they will be improving the title in the future and the first set of updates are out for the game, but issues are still present.

The first key bug I experienced happened at the very end of the tutorial, a pivotal point where you sit down with your first Mob Boss and choose how to approach the situation. Before entering the scene I opened up a menu and guess what, that menu never disappeared completely, even after I left it. It condensed down to a small box which covered the faces of both characters, from both camera perspectives, meaning that instead of looking at the well-detailed characters and facial expressions, I was left with a menu box talking about liquor and managing it.

On top of that, I suffered a whole load of other issues from visual bugs, items popping in and out, characters glitching around during combat, not facing the right direction and firing into nothing (although the damage still counted), and so, so, so much more. I also had to reload more times than I encountered due to these bugs.

Combat as a whole and situations with the various bosses in-person suffer from a whole load of issues that would make anyone wonder why this game costs the price it does, almost as much as a full AAA release. I don’t have a problem with indie or AA games costing the full price of a AAA release, but with the state Empire of Sin is in and the litany of issues and bugs, it is a crime that this game costs as much as it does.

Empire of Sin is absolutely not a good game right now, given the bugs and issues with the game. Even taking those out I still don’t think the skeleton of this experience saves it, as it ultimately ends up being a watered-down and overly complicated management sim with more menus that it has playable characters and gangsters.

Despite some great character models and a setting that isn’t explored nearly enough in games, Empire of Sin is hollow and riddled with issues that make it one of the most frustrating and tiresome games I have played in 2020.

Empire of Sin is available now on PS4 and playable on PS5 through backwards compatibility.

Empire of Sin is a poor and skeleton-thin management game at its core with complicated systems, menus, and tutorials that do a poor job at getting you acclimated to the experience. Add on top of that a library worth of bugs that force you to restart, ruin pivotal moments of the game, and just make the experience more frustrating and you have a game that is not worth even worth a slight bit of consideration. Empire of Sin is a massive disappointment.