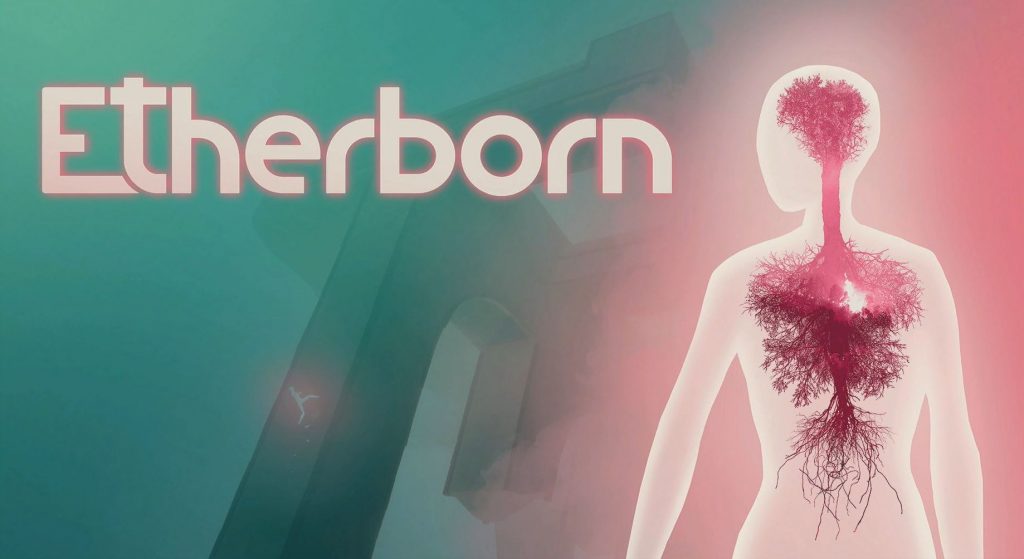 Twisting my head to try and look around a piece of geometry is an action that I did a lot during Etherborn. A puzzle game where you can walk on any surface and the item you need could be just around the corner, but out of your view, makes for a unique and engaging mechanic.

Developer Altered Matter have done a great job of capitalising on that fresh mechanic with some gorgeous visuals and great scenery, creating a puzzle game that is as unique as it is beautiful.

The Law Of Gravity

What sets Etherborn apart from the competition is the mechanic that you can transfer to any other surface, providing that there is a curved wall connecting the two. Gravity is still a factor, however. If you transfer to a wall and walk off the edge the pink skeletal figure you control will fall into the vast nothingness sideways, backwards, upside-down, or in whatever direction is beneath you.

This allows for some expertly crafted levels that weave in and out of themselves. Playing Etherborn feels like you are solving a jigsaw puzzle as much as an Escher puzzle. As you spend more time with a level you can spot the platforms you have to reach and the items you have to collect, but the pieces in the middle, the paths to those objectives, haven’t quite become clear yet. And when they do become clear, Etherborn offers an intense feeling of gratification. The gratification of solving something that was intricate and complex.

However, it isn’t just about walking between surfaces. With gravity still a factor, Altered Matter have added layers to the puzzle solving, with additional platforming elements. You will often have to fall to lower levels of the puzzle box-like levels in order to reach previously inaccessible areas.

All of these M.C. Escher-style levels require you to find glowing white crystals scattered around. These will open up new pathways or remove blockades allowing you to progress. This combines with the level design in an excellent way, revealing new crystals to collect as you loop around and underneath platforms and walkways.

The game does a great job of ramping up the difficulty in a fair but challenging way. Early levels introduce you to mechanics, whilst later levels play with the formula, adding toxic pools of gas and rectangular blocks that will emerge from the ground as you get close to them, blocking obvious pathways and forcing you to think a little harder.

I only got drastically stuck once during my time playing and after finding the solution, I quickly learned I had just not thought of taking the pathway that I needed to take that was quite obvious in hindsight.

One downside with Etherborn is that it only consists of five unique levels, making up around three-to-four hours of playtime if you don’t know the puzzle solutions. Now, each level can be played again in a New Game + mode which hides the crystals in more concealed places. This mode is definitely a challenge and well worth a playthrough as it forced me to look in places and discover pathways I hadn’t thought of in my regular New Game playthrough.

However, I would have liked to see a few more levels featuring unique mechanics, like the toxic pools of gas and rectangular blocks. The concept of Etherborn is great and I would have loved to see a little bit more experimentation in terms of how levels are structured.

The Ether Is Effervescent

Surprisingly, I came away from Etherborn thinking about the visuals and art style the most. Altered Matter opt for a style that emphasises sharp colours and that I can only best describe as ‘colourful simplicity.’ Multiple times during the game I would stop and just stand still, darting my eyes around the screen just to take in how gorgeously colourful the image before me was. Skyboxes are vacant and there is rarely anything going on, but the combination of pure colour and shininess given to everything in the world creates scenes that are still, yet full of life.

There are also some moments where the camera will pan to the side or zoom out creating some beautiful vistas that you should definitely take in when you play. All of this is set to a relaxing piano and string soundtrack that is just as pleasing to listen to as the views are to look at.

Etherborn does have a narrative; however, it entirely consists of an omnipresent voice’s narration, which speaks in vague, grandiose platitudes that don’t seem to make much sense when the game concludes. And, after beating the game more than seven days ago (as of writing this review) I still can’t tell you a single thing about the narrative. It would have been nice to see Altered Matter weave a more meaningful narrative into the game; but, ultimately Etherborn doesn’t suffer one bit because they don’t.

A Game Born Of Creativity

Altered Matter have managed to create a thoroughly unique and engaging puzzle game that challenges you to think beyond what you can see, to experiment, and to test out new solutions whether they work or not. The game expands upon its rules in a fair and enjoyable way making for a fun three-to-four hour game that can be replayed again for an even greater challenge.

Although Etherborn is short and the game could do with a little bit more experimentation in terms of how the puzzle-box-like levels challenge you, you still get a thoroughly rewarding and gorgeous game that stands out as one of the better puzzle games in recent memory.

Etherborn is a great and unique puzzle-platformer with some smart level design and gorgeous views, thanks to its colourful, yet simple art style. It is a tad short and I would have liked to see a little bit more experimentation; however, Etherborn is clearly one of the better, more rewarding puzzle games in recent memory and well worth a playthrough.