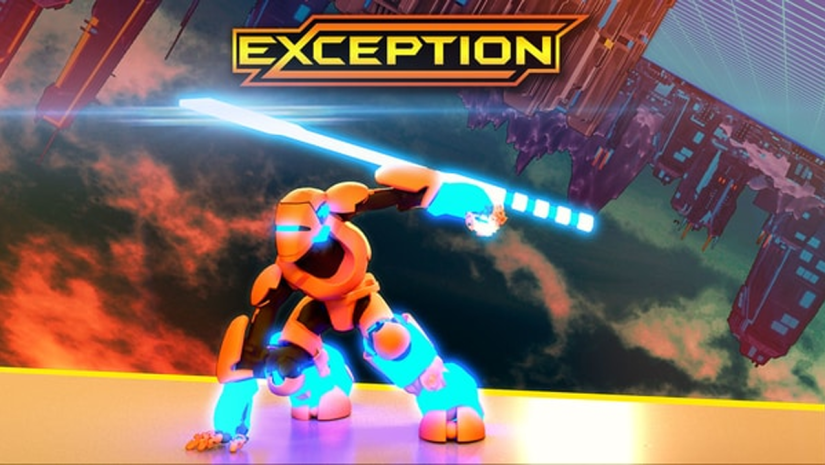 I first saw a trailer for Exception on Twitter and it immediately resonated with me. With its bombastic soundtrack, neon graphics and its mind-bending level layouts, I loved the look of it and I stuck my name down for the review. I like skill based platformers, fast-paced games and this little unknown game has all those elements and more. I don’t know how this game snuck below my radar for so long but yet, here we are.

Exception tells a strange tale of computer virus removal. Sounds riveting, doesn’t it? A grandma, being a complete tech novice, downloads a computer virus to her laptop causing a system wide crash. The subsequent collapse and power vacuum caused by the crash leads to an uprising of a malicious virus. This virus hijacks all the worker threads in the system, turns them against you and its your job, as one of a band of misfit software threads, to lead the resistance and restore freedom and order to this neon-infused world.

The story sections which are told between each world are imparted as comic book style sequences. They are quite good but feel a bit disconnected from the game and you can even put off watching them if you feel the need, they can all be watched from the main menu of the game at any time. I felt the story was just a vessel to propel you through these stages, not really necessary but equally it’s not detrimental in any way.

Exception is broken up into bite-sized levels that can be completed very quickly. I completed some levels in less than 10 seconds but there is a lot more to the game than that. One thing I really like about this game is you can make it as easy or as difficult as you like, completing the levels first time is easy enough even if some of the harder levels did take a fair few attempts. You can then choose to collect the levels collectibles or increase your level rating, which is where the difficulty lies.

Your rating for each level depends mainly on the time taken to get to the finish. However, you can add time or take time away by killing enemies in various ways or performing a number of other feats that reward you with bonus time. This is where the difficulty comes into play, as there were quite a few levels that took me a fair bit of planning and execution to get the maximum score. Some levels I was so far off the required time I thought I must have been playing a different game to the person who set the time.

The collectibles on each stage, which quite aptly for the style of the game are computer bytes. Each time you collect one you are able to add an upgrade point to various skills and abilities to acquire during your initial playthrough. These are mainly combat techniques but increasing their range, speed and efficiency always helps. Especially when you are trying to shave those vital few seconds off your time, increase your ranking or grab an out of reach collectible. However, some of them do seem a bit redundant and unnecessary.

Let’s Do the TimeWarp

Exceptions main draw is it’s level warping system. Levels are sometimes split into sections that rotate in outrageous ways. Once you hit a section blue section marker, the level will rotate, twist or fold into itself revealing a new path that was inaccessible before. It’s a very flashy and eye-popping effect that I enjoyed, even when the levels were getting tricky and I had seen this effect many times, it never felt tired or overused. Ultimately, it allows the developer to be very creative with their levels and they were very creative.

Every platforming trick in the book has been used in this game and that paired with the level warping effect opens up a massive amount of designs. The game constantly throws curve-balls at you and expects you to follow along, its blistering pace, with its clever level design and constant stream of new ideas keeping the game very fresh from start to finish. The very quick levels that Exception boasts also make sure you are always on the move, trying new layouts and progressing at a breakneck pace.

Breaking up the fast platforming are some very strange boss fights. I cannot help feeling that the game would have been better without them. If felt very odd getting to the end of a level you had zipped through at an amazing pace, only then to then stop and fight a massive adversary. I feel the game would just flow better without them, as Exception excels at its platforming, its speed and its well-designed levels rather than the boss fights.

Watching Exception in action is a sight to behold. As you glide through its neon-infused landscapes and bend in and out of its insane level layouts, your eyes are treated to an eruption of colour and light. As you slice through enemies they explode into particles of various colors and the whole thing is like a ballet of fireworks. Along with a thumping dance soundtrack that blasts you through the levels you have a recipe for something very pleasing to play and a unique experience to savor.

Exception performed stunningly, even with all the action on screen and the blistering speed and mind-bending layouts, it never skipped a beat. I never had a single crash, stutter or bug of any kind. I was just left to fly through the levels, enjoy the fantastic explosions of colour and not worry about dodgy framerates or being kicked to the home screen. It was a joy to play throughout and the technical performance of Exception was flawless.

I really had a good time playing Exception. It’s fast, fluid and a lot of fun. As I said earlier if you were just to complete each of the games 128 levels, it will not take you too long but getting all the collectibles and getting a perfect score for each level will add a lot of mileage.

I did feel the boss fights were not needed, they broke the flow of the game and took away the things that make Exception good. Exception is beautiful, the soundtrack is pumping and the whole presentation blends well with the very quick-fire levels and it is a game you can play in small doses if you so wish. I recommend it to players looking for something different and players who like quick, technical platformers.

Exception is available on PS4, PC, Xbox One and Nintendo Switch right now.

Exception is a fast, fluid skill based platformer that is a lot of fun. The quick levels never get repetitive and have a lot of variety to them, while the stellar audiovisual presentation never fails to impress. Unfortunately, the flow is broken up by needless bosses but thankfully they are few and far between.