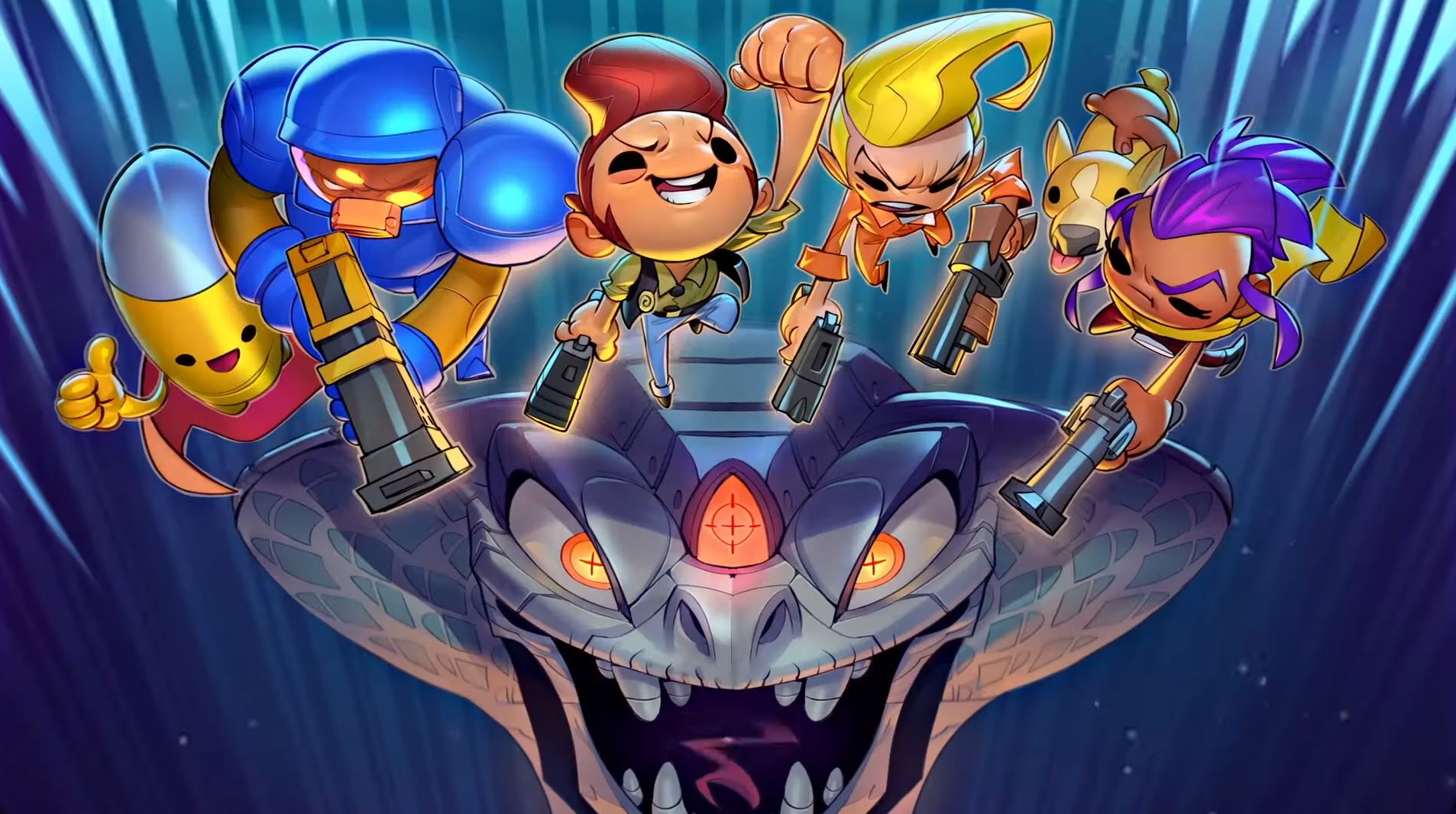 Exit The Gungeon PS4 Review – Dodge Roll and Singlecore take us back for another hell ride in the Gungeon first featured in 2016’s acclaimed Enter The Gungeon. Although the story of Exit the Gungeon may be a direct follow up to the events of Enter the Gungeon, in many ways the game feels like a spin-off.

Exit The Gungeon departs from exploring the Gungeon from the top down view of the prequel in favour of a condensed side-on platformer experience. Familiar roguelike elements and a healthy supply of wackiness are retained, but the fundamental change in formula is a bold choice that demands discussion.

In any case, Exit the Gungeon is a fresh take that’s jam-packed full of action, and will surely beckon all rogue-lite dungeon crawling fans back into its unforgiving depths. While Exit the Gungeon certainly has strong points for fans of the genre to enjoy, there are some fundamental issues that stop it reaching the level of the original.

The experience of Exit The Gungeon can be summed up in 3 phases: Shooting for zany thrills, questioning a pointless nightmare, and lastly, dodge-rolling frantically in an embraceable fun challenge. Newcomers to this niche genre will undoubtedly be caught in a false sense of security with just how rapidly the action escalates.

In the first of the aforementioned phases, you’re jumping into a dual-stick shooter with nothing but good laughs. The player assumes control of one of four controllable characters in the midst of the vaguest of plots. The dimensional anomaly known as the Gungeon is collapsing, and you must escape the depths by the aid of the blessed gun bestowed upon you by a divine being.

Upon landing a number of hits with the blessed gun, it will transform into another, which is selected at random. The list of potential weapons is as vast as it is bizarre. Consequently, it is indeed as fun as it sounds… at least at the beginning.

The randomised blessed gun mechanic is a double-edged sword for the game. On one hand, it makes for pure entertainment that cleverly negates the feeling of repetitiveness. On the other hand, it is the ultimate source of frustration, a random handicap that hastens your demise. When you die, you go all the way back to the beginning level, and you will repeat this process a lot.

Despite being explained as a reward for accurate aiming, gun transformations are often not an enhancement to your efforts at all. In fact, some of the weapon choices are so incredibly impractical for the boss battles that they’re basically a death sentence. Most of the time you will be equipped with something fun to use, just not as equally deadly. The novelty quickly wears off when a boss battle gives you only the tiniest opening to fire off a shot but your weapon has a charge time before shooting.

As is the case with other roguelike games, it is not only the blessed gun that is randomised. The enemies, mid-level room layouts, aesthetics, and even the bosses are picked at random. The randomised boss choice in particular can make for a frustrating time. There are 12 bosses that can be randomly selected at the end of each level.

Some are easier than others, but none of them are a pushover for newcomers. In a fashion similar to a From Software game, you will have to learn their attack patterns and your opportunities to strike. Then, of course, when you inevitably die and return, you will probably be faced by a new and unfamiliar foe. Willingly repeating the process can start to feel like an exercise in masochism. However, in the event you should pass the first level, the game begins converting your efforts into tangible rewards.

Death does not bring about a complete reset to the Gungeon. You will eventually begin finding unlockable additions to the Underbreach (the base floor where the journey begins from) and additional items from vendors that aid in your struggle. With this, you begin to see progress emerging. The cycle becomes more bearable with the added incentive to find more unlockables, and the challenge more embraceable.

Furthermore, the Arsenal mode that becomes available can alleviate some of the frustration handed by the blessed gun transformations. Chests of weapons will begin to appear in the Gungeon that give the option of a secondary weapon. To say the inclusion of this mode is welcome is a gross understatement.

Where Pixels Go To Die

As written earlier, Exit The Gungeon is a slight departure from its prequel’s gameplay stylistically. Whilst I applaud the attempt to take the series in a fresh new direction, I feel that ultimately a lot of the changes have detrimental consequences on the experience. The pixel art style has a timeless charm and looked great in the top-down shooter Enter The Gungeon. However, in Exit the Gungeon, there are, at times, clear problems with reappropriating the prequel’s sprites in a side-on view.

There are times where the character, enemies, and projectile sprites barely stand out from the background. Furthermore, the screen can often become so convoluted that it’s perceivably just a hot pixelated mess to helplessly observe. The frequent tight elevator setting only exacerbates the visibility problem and proves to be another issue on its own. Whereas the prequel had more of an exploratory feel, the confined arenas of Exit The Gungeon are starved of that quality. The rooms are never identical, but then again they rarely provide an interesting arena either.

For all the problems that come with Exit The Gungeon, it isn’t without merits. The sheer variety that has been crammed into a small space is a potent novelty. The humorous dialogue between characters always lands well and is presented by a charismatic cast of individuals. There is genuine satisfaction in clearing the Gungeon, and a sense of reward through incremental improvements to your skill with every restart. Unfortunately, the payoff is not all that it could be.

The core mechanic of Exit The Gungeon revolves around dodge rolling and jumping as a means of temporary invisibility. That sounds like an easy game at first, until you see how much you have to dodge during intense scenes. However, there are at least two unlockable power-ups that can damage enemies whilst you simply spam the jump button. Essentially you can avoid all damage while slowly chipping away at the enemies around you. Once that option becomes apparent, all the prior hardship and grind feels slightly meaningless. This generally sums up the experience as a whole. So much of what initially seems enjoyable about the game comes with a big caveat.

A Disappointing Sequel With Potential

While there are clearly elements that don’t work, Exit The Gungeon brings enough for a roguelite fan to enjoyably grapple with. Also, the absurdness of the combat and mini-games, the offbeat comedy and the synth-wave soundtrack will surely be hitting a good note with any newcomer wanting to dive in.

Unfortunately for everything that Exit The Gungeon does right, there seems to be a drawback. Certainly, there is untapped potential for what’s explored in this title, but ultimately it stands as a slightly disappointing sequel to 2016’s fantastic Enter The Gungeon.

Exit The Gungeon is available now on PS4 and playable on PS5 via backwards compatibility.

A sufficiently wacky and charismatic follow up experience to Enter The Gungeon and an enjoyable roguelite game. Regrettably, due to a number of flaws, it can't be appraised as the sequel fans would have hoped for. Exit The Gungeon probably won't win over any genre newcomers either. However, for existing fans longing for another crawl in the Gungeon, Exit The Gungeon just about does enough to be worth a look.