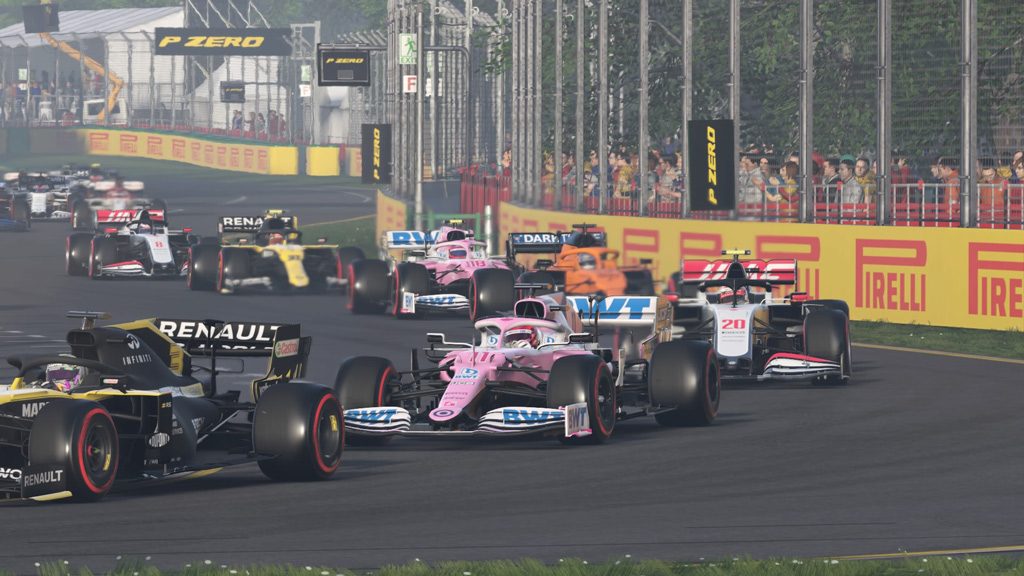 For the first time in 173 years of Formula One racing, the start of the season has been delayed until July. This is due to the pandemic sweeping the globe indiscriminately picking off members of ethnic minority groups, the elderly and the poor, much like George Osborne‘s austerity budget from 2010.

Even the Grand Prix Championship from 1879 went ahead, despite the world suffering from a catastrophic asteroid hit on Christmas day the previous year, which killed 96% of the global stoat population. Stirling Moss eventually beat a young Benito Mussolini to the chequered flag at the final race in a very snowy Dubai and was crowned “Auto King” for the third consecutive year. Sadly Stirling Moss succumbed to the reaper’s scythe during the spring lockdown, along with Bill Werbeniuk, another genius behind the wheel.

The Best F1 Title That There Has Ever Been

Despite all of the above calamities, Codemasters have decided it’s time for another episode of F1. But have they included PPE for the cars, hand sanitiser for the crew and a mobile home full of toilet roll for Bernie Ecclestone?

The answer to the above question is no, although for some reason Codemasters have decided that the Williams car driven by George Russell is depicted wearing a nappy which is changed at each pitstop.

In reality, the F1 2020 game is an even more authentic representation of the sport than the actual sport itself which this year has been reduced to ten races, most of them to be driven backwards with a ‘joust’ safety car every 10 laps driving in the opposite direction. If the first spectacular race in Austria this year is anything to go by, perhaps they should always start late and tell all the teams with less money to crash out early.

Like a lot of games with a yearly release to coincide with an official licence, there’s not a vast amount which is different from the previous year’s edition in terms of actual racing. There’s an incredible sense of speed and immersion thanks to a combination of controller feedback, ever more realistic graphics and sound, and car response which perfectly balances an accessible arcade feel with the simulation options which can be slowly integrated to increase the difficulty until you’re practically there. And race replays so brilliantly rendered, they are difficult to tell apart from the TV coverage. So Codemasters needn’t fix what isn’t broken.

What they have done, though, is to make the split screen multiplayer mode an actual thing again (why was it ever deemed unnecessary?!). As a veteran of racing games from the last three decades, I can assure you that this is good news and well worth making use of with friends.

Daddy Is Getting Closer

And remember the car development / coffee making side missions from the last few years? Well they were just a taste of what we have now – YOU CAN RUN YOUR OWN TEAM. Yes you can now be the boss of team #11 which allows you to be a driver/manager, choose the colour and logo for your (generic looking) car, choose your sponsors and choose your engine from either Honda, Renault, Ferrari or Mercedes. The interviews between races are now more in-depth to include team related questions and the car development options have been tweaked and made easier to work with.

So what previously felt like a distraction from the racing is now a full-bodied management option. If you’d prefer to concentrate on being a driver for hire, that’s fine but for those who want to get involved in the creative aspects of running an F1 team, you can choose to add this to your weekly timetable on top of the racing.

Budgeting is an important aspect of running the team, and this involves choosing how the diary is filled to exploit the time available, either developing the car or maximising the money-making side of the sport. Multiple sponsors can be added and promotional opportunities abound but focusing too much on the financial gains from promotion and sponsorship will leave your engineering team with low morale and your car with technical deficiencies as your rivals steam ahead during the season.

There’s a fair degree of depth involved but enough initial hand-holding and explanations not to make the management aspect too daunting. In fact it became an enjoyable between race mission to make sure the team was succeeding in the right departments before I took off my suit and donned the fireproof leathers. Perhaps being able to create a team principle from scratch rather than doubling as a driver/team boss would enable the experience to be more personalised.

The ability to create a boss who resembles a cross between Eddie Jordan and Frank Williams would have added a much needed opportunity for some fun amongst the clean and regimented menus and decision making. Having said that, the character models for the drivers still leave a lot to be desired so Codemasters clearly have their priorities in a different place.

Stuffed To The Gunnels

So the racing itself is pretty much as perfect a representation of F1 as a PS4 can muster and the new management element is a weighty addition which adds a huge amount of gameplay to a game already stuffed to the gunnels with racing joy. So what else is there for those who want more?

As usual there are ‘invitational’ races which pop up during the normal season, allowing you to drive classic F1 cars going back to the late 80s in special one-off challenges. These are great fun and hearing the throaty rattle of the older cars alongside the more rough and ready handling is exhilarating in what are small doses. The F2 season is another option for those who want to simulate the rise of a young driving star into F1 but for those without the luxury of an excess of free time, the F1 season will be enough.

The split screen multiplayer option works extremely well and allows different car set ups for inexperienced sofa buddies who may not have played the game before. Kudos to Codemasters for adding in an option which may be seen as inessential these days. Online multiplayer is as good as ever with no problem finding races or tournaments so even if you bought the game just for multiplayer larks, you’d be happy.

The bad bits? Well the aforementioned character models all look a bit last-gen so with any luck, F1 2021 on PS5 will improve on the dead eyes and strange toothed smiles. The cut scenes simulating TV appearances are overlong and dull and again, they seem quite dated compared to the astonishing visuals on the track.
Loading times are quite long and often the game reverts to a black screen before the load is complete, which lasted long enough for me to think the console had crashed. This is likely to patched and of course, next year there hopefully won’t be anything in the way of loading screens.

As well as fixing the minor points mentioned above, I’d also add more vintage F1 cars to my wish list for next year. The ones included here are fantastic, but the option of recreating races from the 50s, 60s and 70s would be an incredible addition.

So overall, this edition of F1 from Codemasters easily trumps all previous efforts from them and other developers who came before them. There is an enormous amount of content here, and it’s accessible enough for non-devotees of Formula 1 to enjoy, but with enough complexity and depth to blow away fans and sate their virtual Grand Prix needs.

All we need now is a patch to include the weird real world 2020 season to commemorate how the teams and drivers delivered a brilliant spectacle in front of empty stadiums on a selection of circuits which didn’t expect to host an F1 race any time soon. In one of the strangest years on the planet for life, culture and sport, Codemasters have crafted one of the finest racing games yet.

Easily the best F1 game ever made, rammed full of content that reads like the fans' wish list. Edge of the seat racing backed up by a hearty team management sim, split screen racing and audio and visuals which are edging ever closer to perfection.