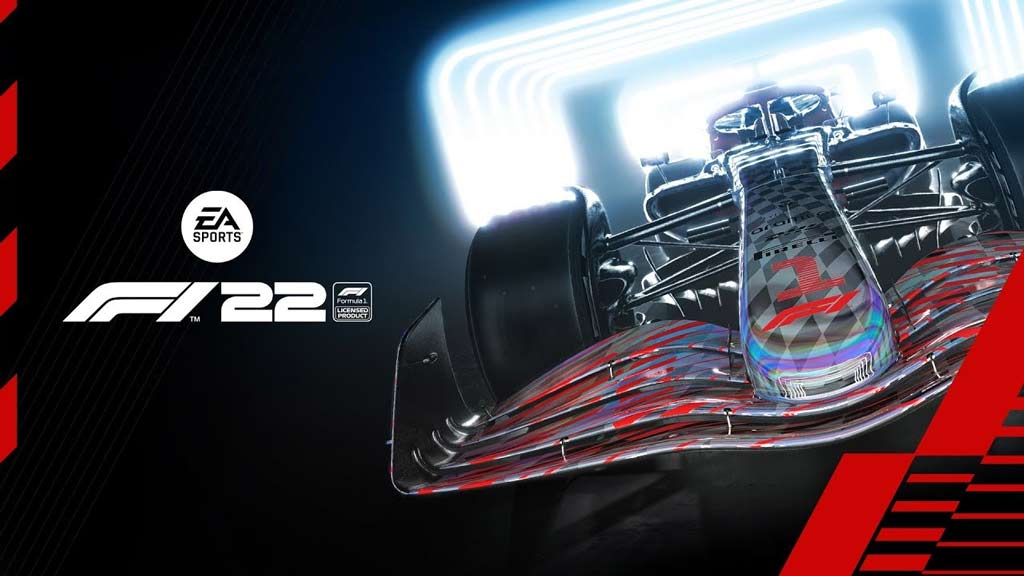 F1 22 PS4 Review. Despite the veneer of pristine TV coverage, a yacht gobbling budget and cars whose development costs the same as the GDP of a small country, the actual on-track racing of Formula 1 is a gritty, dirty affair. High winds, shocking in-car temperatures, debris and bits of rubber littering the tracks and crystallised fall-out from the drivers’ nappies all conspire to create a smelly and sweaty asphalt quagmire not unlike Milton Keynes in mid-August.

Meanwhile, Codemasters have held the F1 licence since 2008 and they have managed to hone their product to such a fine art of customisable simulation, they have covered both the sim and arcade demographics whilst being swallowed up by EA, the behemoth of games publishers. The upshot of all of this is that Codemasters kick out a shiny new version of Formula 1 every year, floundering for new ideas while missing a trick – the real spit and sawdust of F1 for the drivers and players on the track.

New for 2022 is ‘F1 Life’, an attempt to indulge players into the personal wealth and narcissism of F1 drivers which allows you to purchase brand clothing and bland supercars with your vast wealth in-between taking part in the normal season of races. This brainwave, no doubt an uninspired decision following a particularly tedious board meeting at EA Sports manages to miss the point of an F1 game altogether whilst simultaneously ignoring the shocking economic problems afflicting the majority of consumers. Escapism is all well and good for most video games but rubbing our noses in the vast disposable incomes of F1 drivers in a licenced product seems wanton and Thatchereqsue, particularly in the current economic climate.

As well as the branded clothing and furnishings for your impeccably non-descript apartment, ‘F1 Life’ offers up a garage for you to add up to four Supercars to. These can also be driven in a selection of challenges on all of the F1 circuits, but I’m unsure as to why you would want to do this, as in comparison with the F1 cars, they handle like a bunch of British Leyland saloons from the 80s. 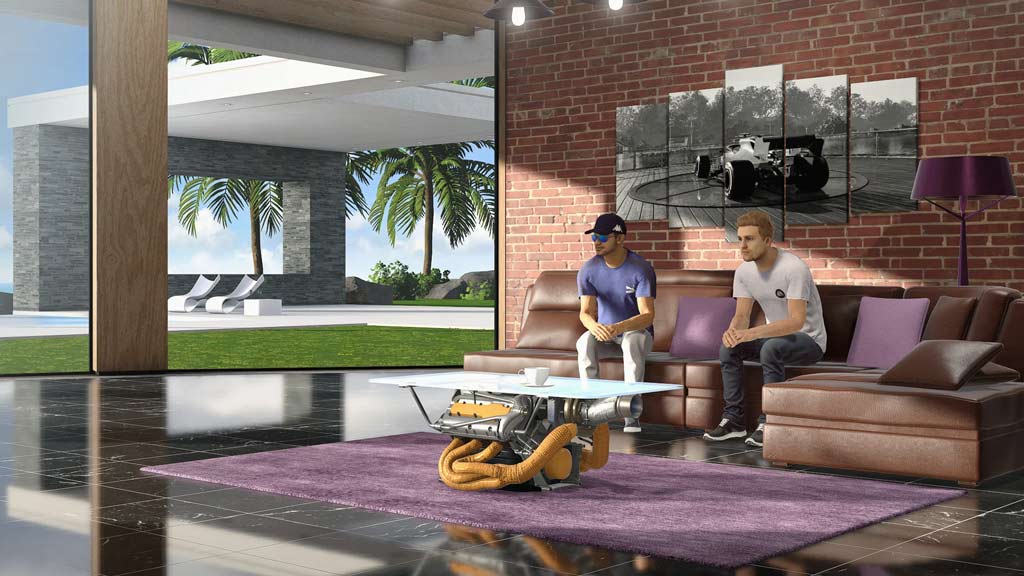 Behind all the razzamatazz of ‘F1 Life’, there is a nasty stink – namely microtransactions. Using real money, you can buy ‘Pitcoin’ (yawn) in order to bulk out your avatar’s wardrobe / apartment / dildo collection but why on earth anyone in their right mind would decide to do this is beyond me. This tosh has zero effect on the F1 season in the main Career or any other modes for that matter, nor does it work in any way as an interesting distraction. It merely denigrates what is a solid arcade / simulation and as ‘bonus’ content it has replaced the Story Mode and Classic F1 cars which were both relevant and great fun to race with.

The 2022 F1 season features cars which are heavier, wheels which are 5″ bigger, the enforced designs are simpler, cup-holders are outlawed and the ‘ground-effect’ designs are now integral to the downforce for the cars to grip the tracks at high-speed. The latter feature has caused huge issues for Mercedes during the first half of the 2022 season, with both Lewis Hamilton and George Russell complaining about severe back pain as the cars ‘porpoise’ along the straights, along with the inconvenience of nowhere to put their Cappuccinos during the race.

Codemasters have dutifully updated the specs of the cars so the handling is noticeably different from 2021’s iteration and the palpable weight and steering response has been ably simulated. Not so with the porpoising which has been conveniently cast to the paddocks with no discernible difference between any of the manufacturers. Understandably Codemasters want to play it safe and no doubt the licencing agreement states that any issue experienced by a single manufacturer shouldn’t be exploited by a video game simulation. Realism? It’s all about the number$. 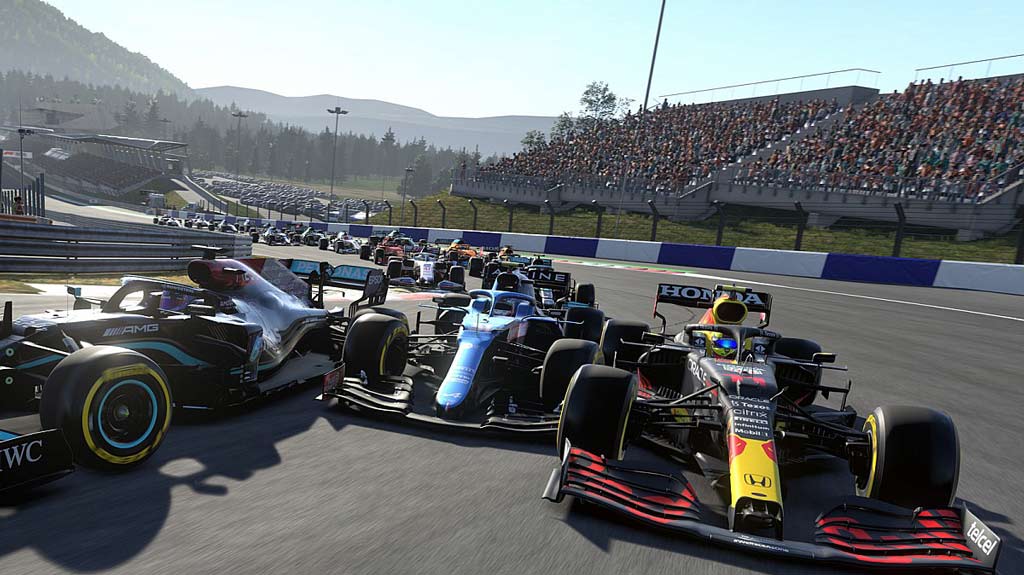 Which brings me onto collisions and crashes, an integral element of the sport which heightens the excitement of the races and showcases the bravery of the drivers who regularly surpass 200mph during a race not to mention the G forces. Delving into the options of F1 2022, the maximum damage and simulation levels of collisions just don’t seem to exemplify the way that cars collide and splinter during a real F1 event. There’s a limitation to the way the game has been programmed which nullifies the potential for spectacular crashes and, like a slew of other factors, misses the essential spirit of the sport.

While I’m moaning incessantly about elements which will hopefully be addressed next year, the character models still remain as dated and creepy as the last few years’ releases. The cold dead eyes and the weird mouths (which seem to offer a glimpse into the void) tend to break the suspension of disbelief and in comparison with the graphical fidelity on-track, it suggests that Codemasters need to divert some of the budget into improving the driver’s faces. 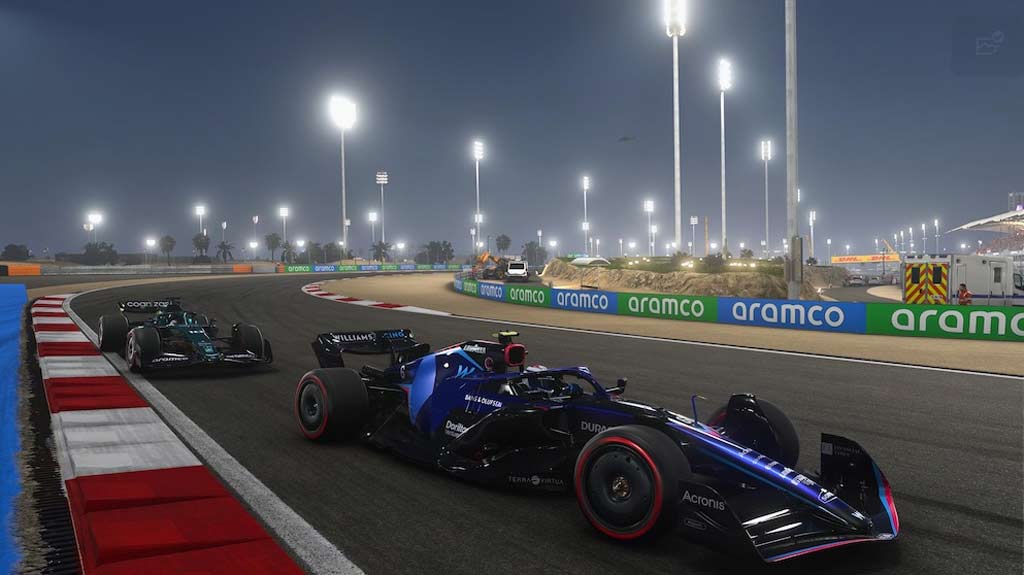 The Core Racing Is Still Superb

So far, so critical. But it’s quite important to call out a multi-million pound licence on its foibles, bearing in mind that despite various bells and whistles, there’s a cash-cow here that’s primed for milking. But despite all of the above, the actual excitement of racing and the delirious sense of speed continues to be admirably delivered by Codemasters. The aforementioned customisation options cater for players who want to dive into arcade style racing or at the other end of the spectrum, technical devotees who want to experience the unforgiving nature of F1 as a full simulation.

Research and Development of your team’s car returns, allowing for judicious use of funds to iron out any deficiencies as the season progresses and points can be amassed during pre-race Practice sessions either on-track or as an automatic option which allows you skip straight to Qualifying. It’s highly recommended that you take part in at least one of the Practice sessions, purely in order to learn how the new cars handle on each track.

F1 2022 works incredibly well at whatever level you choose to race and when you manage to settle into a balance of how challenging the competition and handling works for you, it’s hugely compulsive and most of all fun. But is it worth buying? Despite the updated circuits and cars, I’d be more inclined to recommend either F1 2021 (which has the Story Mode missing from 2022) or F1 2020 (which has a host of classic F1 cars). There’s a negligible difference in the quality of the racing on both games and all the management aspects are present and correct, and most importantly ‘F1 Life’ and its microtransactions are just a twinkle in an EA executive’s eye.

For any avid F1 fans who are desperate to experience the current cars and circuits, you won’t be disappointed with the quality of the racing and the attention to detail. Just steer clear of ‘F1 Life’ which will hopefully be jettisoned for 2023.

Codemasters have dutifully updated their F1 template with the new car designs and the up to date roster of circuits whilst ditching the Story Mode for an entirely unrelated and pointless avatar clothes shop featuring microtransactions. While the racing itself remains superb, there's an increasingly hollow corporate veneer which undermines the core of the well-crafted game engine. I'd be inclined to stick with F1 2021 until the nouveau riche supercars and furnishings are jettisoned for 2023.