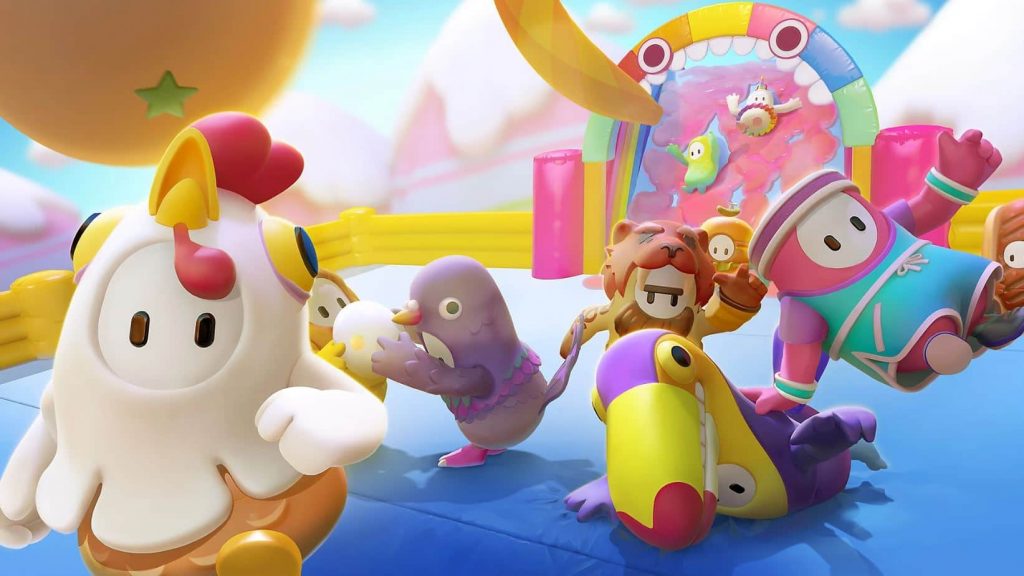 Usually my reviews start off with a long description of the game and go into detail about a variety of different aspects featured, but Fall Guys doesn’t need that. Fall Guys is bloody fun and one of the most exciting and enjoyable takes on battle royale we have seen since the genre’s inception.

If you haven’t seen the internet sensation yet, Fall Guys is a battle royale disguised as a game show, where 60 players compete in an Episode, made of up to five rounds, to become the last Fall Guy left standing. These modes range from a simple race-to-the-finish-and-avoid-the-obstacles to more strategic and longer survival and team games. Crucially though, all of them are incredibly enjoyable.

Racing modes have a frantic pace and a butt-clenching amount of tension as you try to grab you way to ledges, dodge incoming balls and fans, and narrowly avoid falling off a ledge and restarting from the last checkpoint.

Team-based modes are not as immediately gratifying as the racing modes but they are still enjoyable, with Hoarders, a mode involving keeping giant balls in your section of the play arena, and Rock ‘N’ Roll, a minigame which has you pushing a ball over obstacles to reach the end first, being two of my favourites due to the collaboration needed and thrill of succeeding and fending off your opponents.

Survival modes are focused on, well, being one of the Fall Guys left standing at the end of the round. These vary from jumping over a moving beam to squeezing through a number of gaps which rotate and alternate over a minute or two. These are the less interesting modes for me as they are more about waiting around for other players to mess up than playing the game and using your skill. However, they are still enjoyable and offer a welcome break from the intensity in the other two types of rounds.

Finally, after you make it to the last handful of players you will engage in one of three different final rounds: Fall Mountain, Hex-A-Gone, or Royal Fumble. The player to succeed in these rounds is crowned the overall winner.

Fall Mountain has you race to the top of the titular mountain, avoiding obstacles and grabbing the crown at the end. Hex-A-Gone involves strategically walking along a platform made of hexagons with each one disappearing once stepped on. There are around eight floors and the last person left walking on the hexagons is crowned the winner. Royal Fumble is the least enjoyable of the three final rounds, with you and a couple of other people chasing around one player who has been granted a tail. By grabbing that player you are then given that tail and the person wearing it when the clock runs out wins the Episode.

The variety in Fall Guys is excellent and even after a substantial amount of time with it, none of the modes have grown old yet. Sure, I have my least favourites, Slime Climb and Team Tail Tag, but each episode is so quick that Fall Guys is a great game to jump in and play for 15 minutes and then hop out, which I can see myself doing for months.

Of course, the other half of Fall Guys is the personality the game offers. Mediatonic has given us a staggering amount of customisation options to make our Fall Guy look exactly how we want. Patterns, colors, and even clothes for the top and bottom halves of their body all can be added to your Fall Guy giving them the look you want.

At launch, I managed to find an Owl costume that I adored and equipped that along with coloring my Fall Guy green, which is my favourite color. But, if you want to take a more outlandish look you can. Only want your Fall Guy to wear underwear? You can do it. Want to wear Bird Feet while dressed up as a pineapple? Sorted. Looking for spots to put on your Fall Guy and make them brown? Easy to do. The options here are great and it really goes a long way to ensuring your Fall Guy stands out in the crowd of 60 players.

On top of cosmetics, you can change your victory animation, emotes performable in-game, alongside a few other things. This further helps to build your Fall Guy and allows you to inject your personality into him or her.

All of these cosmetics are either unlocked through the store, which does sell premium currency, or through the game’s seasonal Battle Pass. Now, both of those things may have set alarm bells ringing, but I am happy to report that Fall Guys’ premium currency and Battle Pass are some of the fairest I have seen in any game to date.

The Battle Pass only consists of 40 tiers and there is no premium option, meaning that if you play the game you can get everything it has to offer without spending a single penny. The amount of XP each game gives you is also generous, and completing that Battle Pass isn’t that much of a struggle.

When it comes to the store you can buy items using Kudos, which can be earned by completing games and from the Battle Pass or by purchasing it with real money. However, I don’t see the ability to buy Kudos as a problem, because you are giving a generous amount from completing games, allowing you to purchase the skin you truly want or a celebration you have had your eyes on. This store rotates every few days so there are always fresh new things for you to grab.

I would prefer the game to have some kind of challenge system, allowing you to unlock some or all of these items, but Mediatonic and Devolver Digital are definitely not trying to rip your cash from your wallet with the store in Fall Guys.

Looking To The Future

As with all multiplayer games, Fall Guys will live or die depending on the support it gets post-launch. With Mediatonic already promising new levels, costumes, and game features, the future looks promising for Fall Guys and I hope that they are able to keep up the pace of releasing new content.

Limited Time Modes, variations on the Battle Pass and throwing in special rewards every now and again would all be a solid addition for sure, and if any game has had the success so far to pull off a bevy of post-launch support, Fall Guys is the game to do it.

The Summer Party We All Needed

It’s fair to say that 2020 and the Summer, in particular, hasn’t been a great year for anyone. Fortunately, Fall Guys is the Summer Party and fun we all needed, providing a thrilling and hilarious escape from the real world.

The personality in the Fall Guys when they move and emote and the customisation options on offer allow you to truly mould your Fall Guy to your liking and craft the one that represents you the best. Pair that personality with an exhilarating and fast-paced battle royale like no other and you have a hit on your hands and potentially a future classic.

Fall Guys is absolutely worth a play and it is great comfort food to play in-between big releases. Overall, it’s easily one of the best party games of the generation and an experience everyone should get a taste of.

Fall Guys is available now on PS4 and it is free with PS Plus in August.

Fall Guys is one of the best online party games of the generation, offering a hilarious and intense battle royale with a ridiculous amount of customisation. A speedy pace and a substantial amount of different modes at launch mean that the game is always fresh and exciting. Even the Battle Pass and store are some of the fairest and less money-grabbing I have seen. Fall Guys is a must-play.