It’s fair to say Fallout 4’s DLC up until now has been a little on the lean side, and pretty disappointing to boot. Automatron brought a new storyline, companions and enemies, but lacked much in the way of impact on the game world. Wasteland Workshop gave you new tools to shake up your established settlements with monster fights, but boiled down to being little more than a cosmetic update. In fact, by far the most interesting (and frightening) addition so far has been the free addition of Survival Mode, a brutal game of life micromanagement that makes you wonder how you even cope being alive in real life. What most Fallout 4 fans have been waiting for is this latest slice of the Season Pass pie, Far Harbor; an enormous expansion pack, filled with large new swathes of land to explore, fresh beasts to pick off, new plotlines to unravel and hundreds of extra drawers and lockers to pilfer from so you can make a child’s swing set.

Far Harbor begins with a visit to Nick Valentine’s detective agency to discover a new case awaiting you, namely a missing person’s case at the edge of the Commonwealth’s borders. What you discover takes you on a boat ride to the foggy Far Harbor, the titular area itself, where you are almost immediately thrust into a skirmish between the townsfolk and some creatures you’ve never seen before. Already there’s something noticeably different about this place off the coast of Maine, whilst still being undeniably part of Fallout 4. The swirling fog gives off a gloomy atmosphere not present in the Boston area, while the first buildings you encounter are more akin to the Salem parts of the map in the regular game, old, gothic and very much a seaside town. Like Scarborough, but a bit brighter and with less sense of impending death. It’s worth pointing out here that my initial excursion outside the town was rife with framerate drops, and while it cleared up substantially as I went on, it still performed worse than it did during my time in the Commonwealth, albeit mildly so. Results may vary, as is sadly true of all Bethesda RPG’s. It takes away from an otherwise intriguing new place. Your tolerance of the engine’s failings and the unpredictable nature of performance make for an unfortunate air of uncertainty

Your main mission is to find a young woman at the behest of her parents. She has supposedly run off to join an elusive cult of synths and that is the catalyst for your exploration of this new place. This then reveals that there is an ongoing feud over ownership of the island between the residents of Far Harbor and the irritating radiation-worshipping loonies that already proved to be the bane of my Fallout 4 life so far, the Children of the Atom. This dynamic between the Synths of Acadia, the Far Harbor residents and the Children of the Atom is a more condensed version of the main game’s battle for the Commonwealth between the Brotherhood, Minutemen, Institute and Railroad factions. As such, it’s got a much stronger, more cohesive narrative for it. The Acadia Synth colony offers up a deeper look at the Blade Runner-inspired questions previously raised in the game. They want peace and coexistence between all factions, a departure from the elitist snobbery/coldly logical offered up by the Institute. It also offers up a little empathy for the Children of the Atom, something I thought impossible considering how much I despised them in the Commonwealth. I still want nothing more than to see the whole lot of them shot into the sun, but I’d at least feel a little bad about it now. Everyone, no matter how daft or cruel, has honest intentions for Far Harbor. This time out it’s really just you that’s being properly deceptive. As with the main game’s faction war, you need to choose a side eventually, but you’ll likely need to play nice with them all for a while until you feel you have enough facts on hand to make an informed decision about what the island best deserves. Or you’ll just be an arse and do whatever the hell you wish, and damn the consequences—it’s your prerogative, after all. Far Harbor definitely has a better balance between the factions when compared to those of the main campaign. There are valid points to every group’s cause and equal amounts of arrogance and naivety. It probably helps that the dialogue options are more likely to give you solutions to problems in Far Harbor that don’t involve killing someone or something. Basically, manipulation and pandering are gateways to getting the job done without resorting to bludgeoning the face off of the source of your problem. It’s delightfully political, and fascinating to see the arguments between the factions unfurl as the game progresses. Given what else inhabits the island though, I’m not entirely sure why any group wants it to begin with.

The highlight of Far Harbor are the new creatures that live there. There’s new, but regular-looking, foes like wolves, but beyond that are some delightfully inventive nasties. Gulpers are adult human-sized mutations of amphibians, very reminiscent of Resident Evil’s Hunter y variant. They also like to hang from trees and drop down on you, the bastards. Meanwhile, Crawlers are nightmarish insect mutations that look like a horrifying cross between a centipede and a mantis, and then there’s the Angler. The name tells you enough about their heritage, with the face being that of an angler fish, but the body and mannerism are very much of a four-legged predator. They are about the size of a large dog and the react to your presence in much the same way. There are other beasties and enemies to encounter for the first time, but it’s best to discover them yourself. 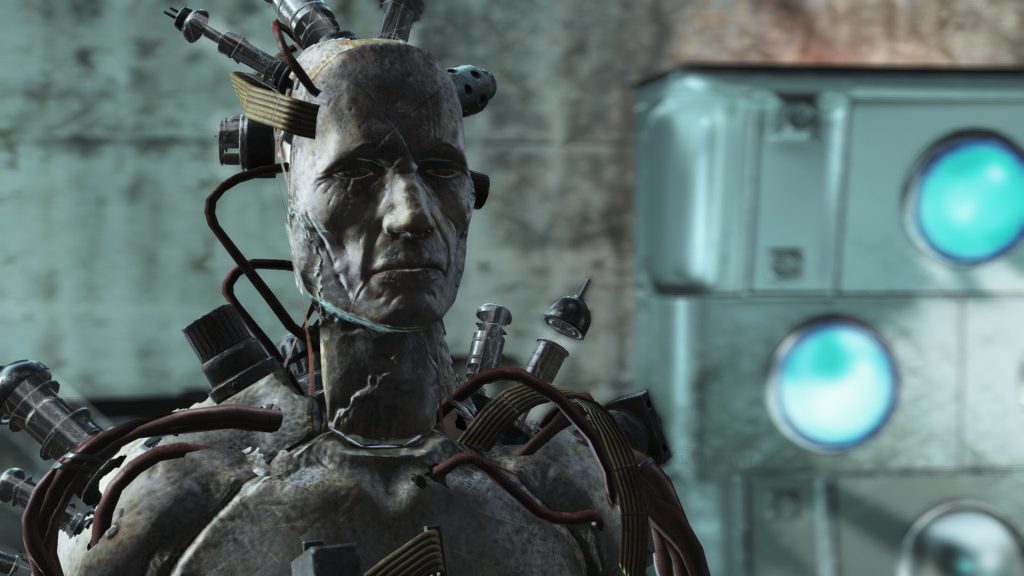 The vast rolling fog is also to be considered an enemy. It’s radioactive, so it chips away at your health over time. You could wear a hazmat suit, but that would leave you at the mercy of some of the more vicious monstrosities lurking within. As a result, the better options are to stock up on Rad X and RadAway, and keep to higher ground where the fog is not present. It never really feels like a legitimate threat (unless you’re playing on Survival, in which case, this is all a horrible nightmare made reality) and more of a continuous poking in your side. Still, it changes up the dynamic, and does provide for some of the expansions best moments.

A special shout goes to the side missions. There’s one involving a new vault and a murder mystery that’s right up there with my favourite Fallout missions. Being a post-apocalyptic Poirot, complete with overzealous dialogue and high drama. It’s funny, interesting, and can be resolved without ever raising a hand in anger. Brilliant. The other side missions are also commendable, but this one was far and away the winner for me, outstripping anything the main game had to offer.

Far Harbor is packed with interesting new things to see and do, certainly enough to warrant the price, but it needs to be said that despite all the newness, the aesthetic is very much the same, even with the change-up in enemy types and the addition of the fog. That’s fine in the sense that it feels like a proper extension of this corner of the Fallout universe, but it’s not as distinct a location as say, the ones for Operation Anchorage or Point Lookout were in Fallout 3’s expansions. If you’ve grown tired of Fallout 4 already, then this may not be quite the jolt to the system you were hoping for, but regardless, it does feature some of the strongest points of the Fallout 4 package to date. Here’s hoping there’ll be another sizeable expansion for the game in the future. Just one with a few less performance issues though, eh Bethesda?

Easily the best DLC entry for Fallout 4 to date, Far Harbor introduces some exciting new enemies and a tighter, more enjoyable main storyline. It also brings an air of over-familiarity and fresh performance issues that blight an otherwise exceptional expansion.