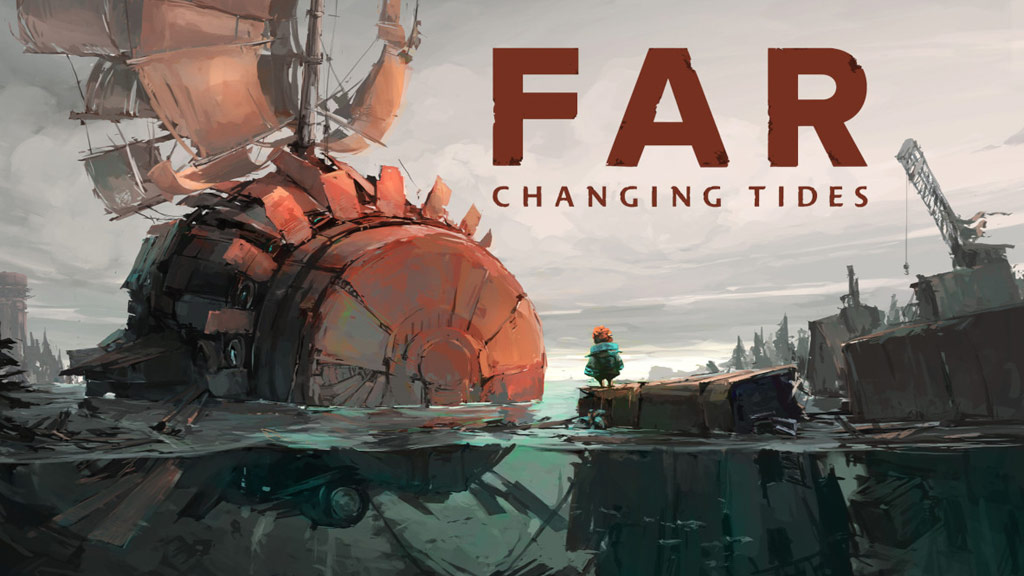 FAR: Changing Tides PS4 Review Swiss developers, Okomotive AG follow up their highly lauded but brief 2019 puzzle adventure FAR: Lone Sails with a new tale set in a flooded world where much of civilisation is now under water. Bearing in mind the abysmal efforts of most countries allegedly committed to reducing their carbon emissions, Changing Tides could be seen as a glimpse into the not too distant future. While the billionaires and their families are off colonising and performing colonoscopies on nearby planets, the rest of us will be cobbling together steampunk sailing ships in order to find sources of food on dry land as an alterative to eating our pets and loafers. So is this environmentally soothsaying 2D adventure as enjoyable as seeing a billionaire and his escape-rocket burn up in the atmosphere?

A Beautiful And Poignant Exploration Puzzler

Like its predecessor, FAR: Changing Tides has not one word of dialogue, nor any explanation of who your character is and why they find themselves in a world which is partially submerged by water. Again, the colour palette is muted but the highly detailed ‘hand-painted’ visuals are astounding in their subtle beauty, with many layers of background moving to create great depth despite the linear two dimensional gameplay. The rousing and atmospheric score is also on a par with Lone Sails, creating an atmosphere of hope in the bleak and lonely environment.

You begin atop a submerged building surrounded by calm water and as you swim, walk and jump from left to right across the tops of buildings, you eventually come across a stranded vessel where you get a taste of the first of many rudimentary puzzles which must be solved in order to progress. The puzzles often involve switches, hooks and pulleys which must be turned on in the correct order, and along with a handy colour coding of these interactive items, a solution is usually easy enough to find, even if sometimes it means resorting to trial and error with the more obtuse puzzles. 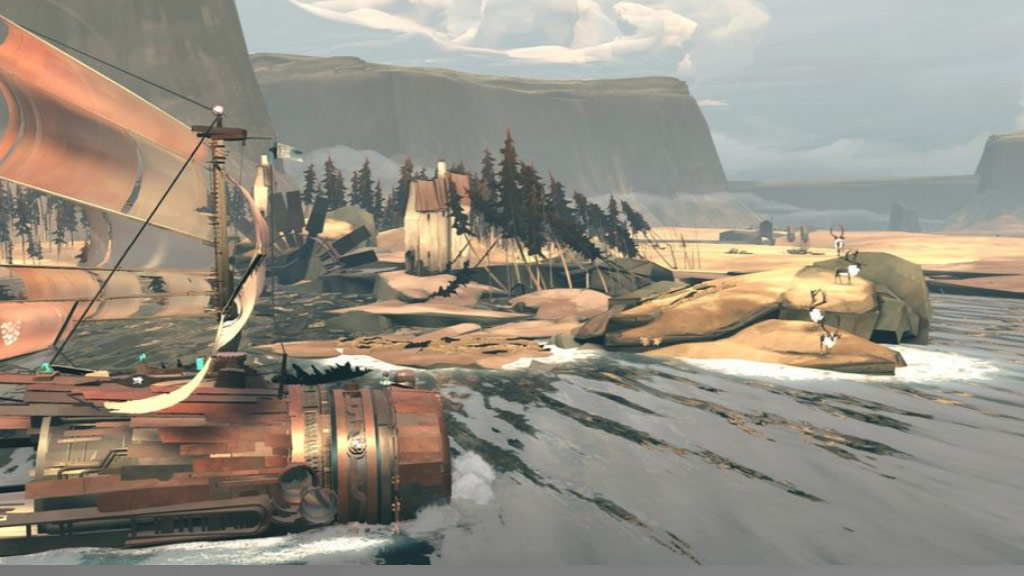 As you enter buildings (or your vessel), the solid outer walls become temporarily transparent to allow you to explore. Holding R2 zooms in much closer for any intricate puzzles and L2 allows you to zoom out and pan around, especially useful while your vessel moves forward at a rate of knots to allow you some foresight. As with Lone Sails, a toggle would have been useful so as not to have held down the trigger button whilst negotiating platforms and switches but it’s not a major niggle.

Whilst the general feel of your character’s movement across the side-scrolling world is similar to indie classic Inside, there is a calm and meditative quality to Changing Tides due to the fact that your character cannot die and there are no obvious threats present. There are brief signs of animal life in the water and on the distant lands, but otherwise you are alone. Somehow though, it never feels like a solitary existence because of the companionship offered up by your ship which is integral to the story, as without it you would flounder in the watery wastelands.

Once your mechanical companion is released from dry dock, you set sail deeper into the desolate world, with a handy flag on the mast guiding you on how to adjust the sails to make quicker progress. Below deck you’ll find the engine room, yet to be operable but an indication of how you’ll progress when the wind drops and you have the necessary means to fire up the steam engine. 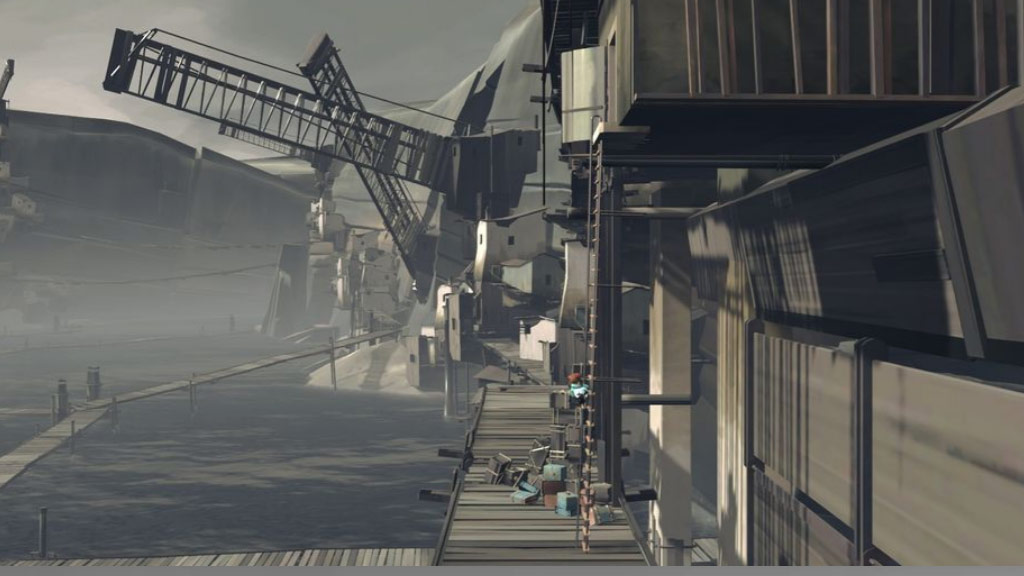 Full Steam Ahead (and Below)

When you do eventually have steam power, you’ll need to collect fuel from the seabed and any buildings you visit to ensure that there’s a plentiful supply for longer stretches of water. The boiler also needs constant attention to supply it with oxygen and ensure it doesn’t overheat. Fortunately you can focus on these enjoyable plate-spinning sections of the game uninterrupted while your ship is propelled forward atop the ocean until you are required to turn off the engine when you are forced to stop.

Your ship’s movement is periodically halted by obstacles such as floating lighthouses, storage vessels and factory chutes, all of which can be removed by hopping off into the water or into the nearby building and performing simple tasks in order to clear the way to plain sailing once again. Further into the game, your ship takes on submersible qualities and not only do you need to propel her forward, but also use an additional lever to dive or surface if there are surface or underwater hazards blocking the way. This requires some dextrous juggling of levers, pumps and switches but you’ll soon settle into a productive rhythm which ensures you don’t keep stopping and starting. 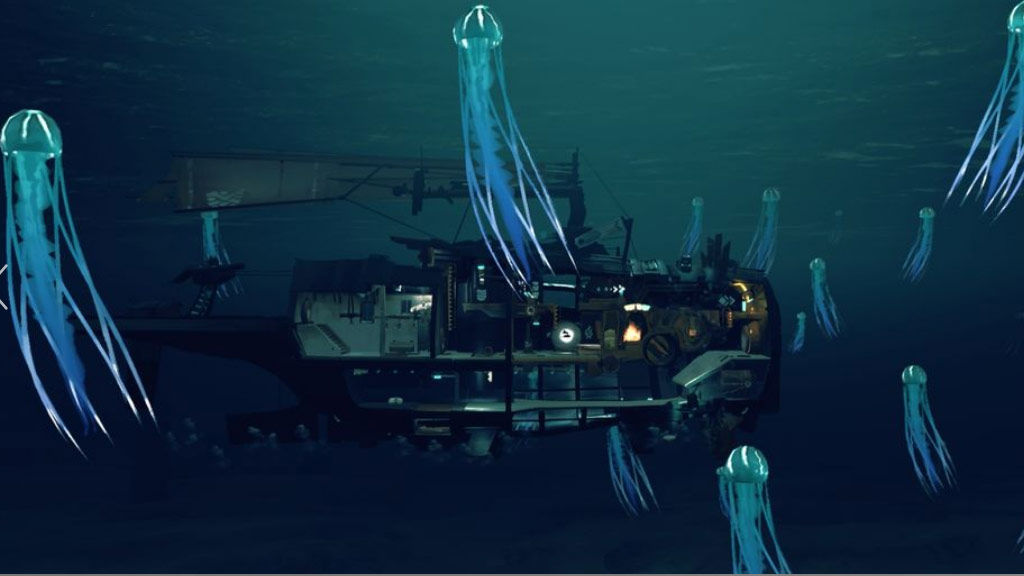 Despite the world of water in which the game is set, the busywork and minutiae of these tasks may sound somewhat dry and tedious based on what you have read so far. In fact there’s a magical quality to the serene gameplay which is absorbing and addictive and the air of mystery of how the story unfolds will drive you to keep playing to the end.

Of course not everyone will be drawn to such a meditative experience, and unless you have the patience to guide your character and nurse your jalopy through the gentle travails of the game, it won’t be for you. The linearity of the story also means that you’re unlikely to start over (as there aren’t collectables per se) so there’s precious little replay value except just to immerse yourself in the sedate ambience again.

That said, if you are this way inclined, FAR: Changing Tides is a charming and engrossing interactive puzzle adventure which will provide a good few hours in a unique and beautifully realised watery world brimming with atmosphere. Changing Tides is longer than its predecessor and it’s an ideal title to dip in and out of, as the auto save points are regular and well timed so unless you hammer it in one sitting, it’s a great game to live with for several weeks of casual playing. With any luck, another FAR instalment will arrive in the future to create a wonderful trilogy of interactive storybooks which very subtly and gently comment on the state of the world if the environment is continued to be decimated as we continue to do right now.

FAR: Changing Tides is available now on PS4 and PS5

A gentle and meditative story which combines simple platforming puzzles and some basic steam engineering to great effect. Beautifully illustrated and scored, FAR Changing Tides is a joyful experience for patient players who are happy to jump aboard this serene cruise through a flooded but gorgeously bleak post-climate changed world.