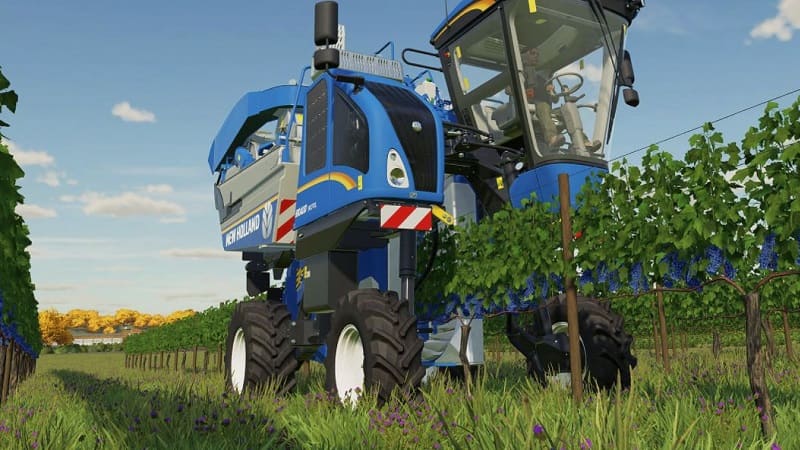 First things first though – if you’re a newcomer to the Farming Simulator series than the opening tutorial really won’t do you too many favours. Seemingly the symptom of a bug rather than a necessarily nefarious design decision, Farming Simulator 22’s tutorial tells you what to do and how to do it, but very often that crucial guidance prompt that you’ll need to learn what to do will just disappear if you happen to stumble into another fiddly menu by accident – which sadly, can be quite easy to do.

However, perseverance as they say is a virtue and marching though the seemingly accidental hostility of Farming Simulator 22’s tutorial and the opening hour or two beyond will see the latest entry in the Farming Simulator series open up its charms in earnest. 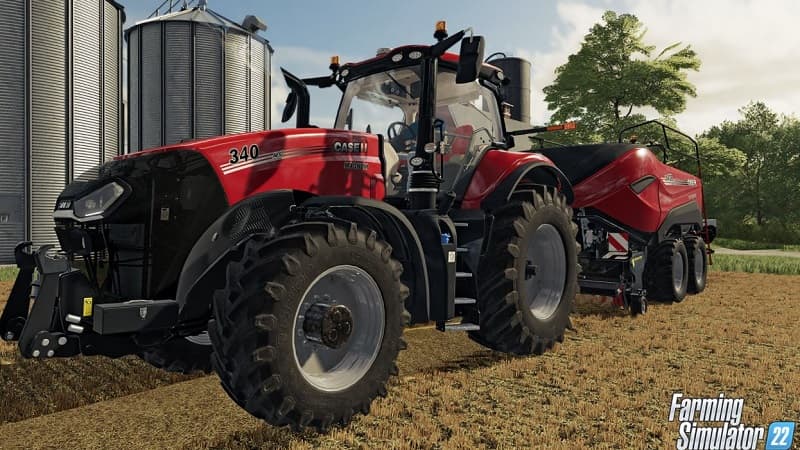 Like previous games in the series, Farming Simulator 22 doesn’t necessarily drive players with set of explicit directives and tasks but rather leaves it up to them to understand and through the use of common sense, the sorts of things you need to do in order to run a thriving farm that is wallowing in the red. Naturally, if you’ve even watched just a minute of actual farming footage from real-life, you’ll know (or at least gain a gradual appreciation for) just how multi-layered and micro-managed the whole farming process has to be.

Without giving a painful and banal blow by blow account of the sort of tasks that you need to do in order to keep your farm afloat, much of it is common sense from a theoretical standpoint while the rest of it is accomplished by good old lengthy bouts of manual labour and it’s really here, amongst the seeming doldrums of harvesting wheat, seeding fields and tilling the soil with the array of impressive machines that are up to the task that Farming Simulator 22 approaches something resembling zen.

You see there’s an almost existentially chill joy in just slowly chewing up wheat in your Deere combine harvester while relaxing country anthems happily twang away in the background. It’s super relaxing stuff for sure and the attention to detail on these hulking machines is also hugely impressive too, being deeply evocative of their real-life counterparts with over 100 real agricultural brands represented in Farming Simulator 22 to boot. Each of these machines feels appropriately weighty too, with the sort of heft and wide turning circles that really convince you that you’re driving some big-ass hunk of industrial machinery that ain’t built for racing but rather is engineered for something a little more meaningful. 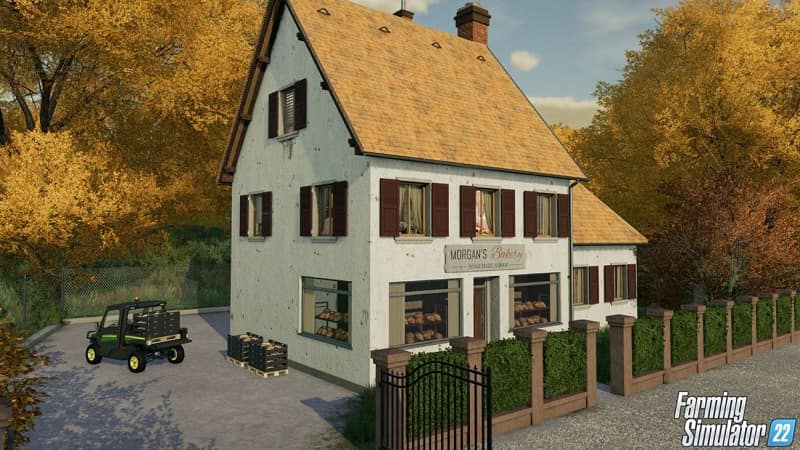 Beyond the actual physical interactions that you’ll have with your world (there are trio of different farms to choose from that inhabit three very distinct environments – each with their own challenges), there’s the overarching economic management of your farm which arguably acts as the backbone for Farming Simulator 22’s more strategic considerations.

While selling produce from your farm is the ultimate goal, there’s a huge number of different factors to consider. For example, sowing seeds might seem fine and all, but some seeds can only be sown at particular times of the year. Equally, if you want to rear livestock and make some fat stacks from that, you’ll need to make sure that the animals on your farm are cared for and their environments maintained properly – all of which costs money and time. You also need to be shrewd with your cash too and one such example of this is in the various machines that you’ll use to aid in your farming escapades.

Massive feats of precision engineering, these machines obviously don’t come cheap and because not every fledgling farm will be able to afford to buy them out entirely (especially on the more challenging levels of difficulty where the economy is in the toilet and money is scarce), leasing becomes an necessity but also brings with it the sobering fact that you don’t own the machinery, meaning should you default on your payment you won’t have any farming equipment to help you along. 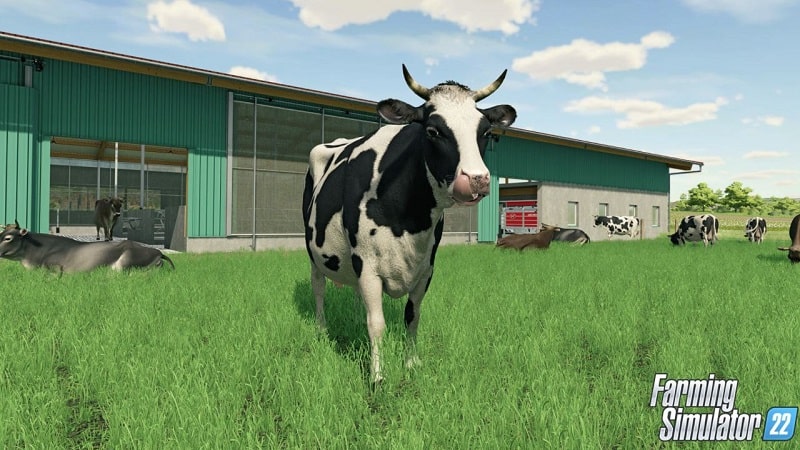 Then there are other factors that you will have to contend with that are outside of your sphere influence too. Crop disease and other such maladies can wreck a carefully sown field, while brand new seasonal cycles can result in extreme weather that can also wreak havoc on your farm, but which also conversely provide additional opportunities for you to take advantage of with a range of crops and other activities that can be leveraged to get ahead – if you know how.

Luckily, you can hire a range of creepy looking AI helpers to help you do the more long winded tasks, such as harvesting and the transportation of goods, thus freeing you up to do something else potentially more preferable. Elsewhere, Contracts are also often available and basically have you completing a bunch of manual jobs on the side for other farmers and represent not only a neat and fairly effortless way for you top up your coffers (and soon prove invaluable on the higher difficulty levels), but also provide newer players with some much needed experience as well.

Furthermore, you can actually split the running of your farm with up to six players all working in tandem to manage things in a way that, on the surface of it at least, doesn’t seem a million miles away from how you’d want to maybe manage a farm in real-life and proves to be wonderfully compelling in the process. 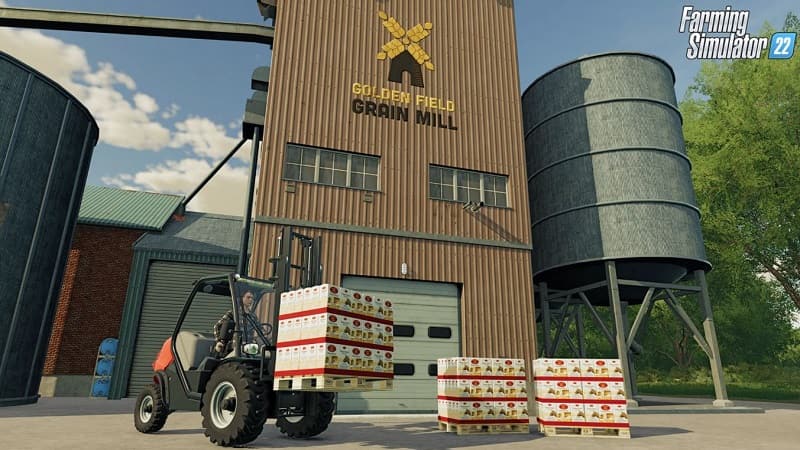 The fact remains however that Farming Simulator 22 very much needs players to be patient with it in order to get the most from it – and for those who are willing to put the time in, potentially hundreds of hours of satisfying farming shenanigans await. Though not perfect and let down by a glitchy tutorial, an oddly stunted visual presentation (the machines are modelled beautifully but the surrounding buildings sort of look like they’re made from cardboard) and an odd lack of PS5 focused features (the adaptive triggers would add much to the sensation of the various vehicles), Farming Simulator 22 nonetheless makes a compelling case for itself as a relaxing and entertaining curio that warrants further inspection.

And quite honestly, in a year stuffed to the brim with games where you’re destroying stuff (when is it not, curiously?), it actually feels good to nurture and grow things for a change and that’s a rare sort of evergreen, largely wholesome thrill not usually found in other titles, let alone one that blends strategy and micro-management quite so deftly.

Since the series started, the Farming Simulator franchise has ultimately been a largely chill blend of strategy and economics simulation that you can scale up (or down) depending on your comfort with its myriad of mechanics – and that hasn’t changed in Farming Simulator 22. What has changed however, is that developer GIANTS Software has padded out that compelling base formula with a range of new and meaningful additions that all serve to not only make the series more compelling, but also ensure that it becomes a staple of my gaming diet whenever I fancy something that relaxes and taxes the old grey matter in equal measure.

Farming Simulator 22 is out now on PS4 and PS5.

Easily the best entry in the long-running series to date, though Farming Simulator 22 might not have a picture perfect PS5 debut, it does augment the series already robust strategic and micro-management fundamentals with a number of new additions and features that make it an erstwhile choice for series veterans. Though newcomers will likely struggle with the tutorial and learning curve, Farming Simulator 22 soon becomes an engaging time sink that not only taxes the brain duly, but helps to provide a modicum of insight into the sheer amount of hard graft that goes into one of the most challenging occupations in the world.