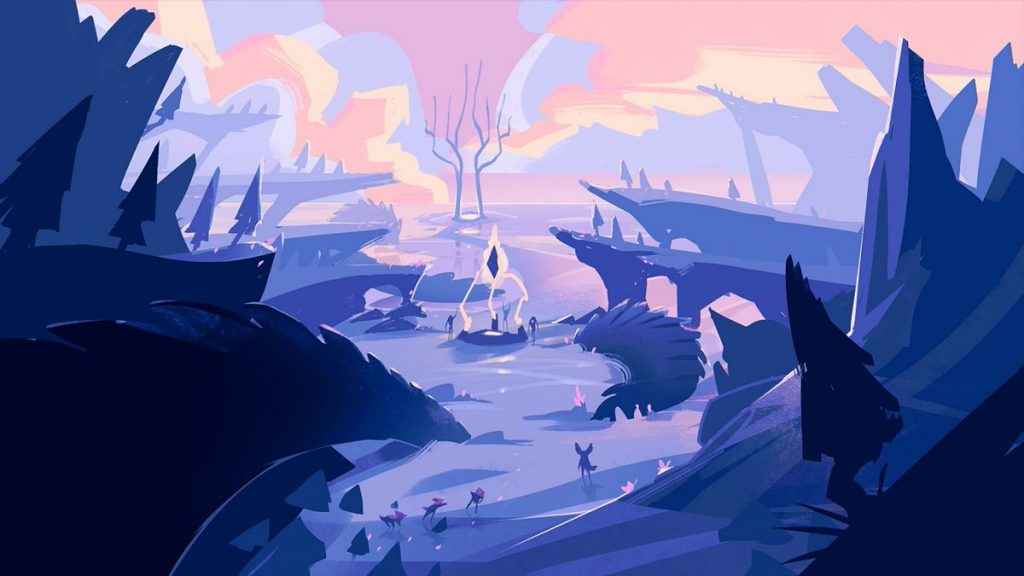 You are Fe, a very particular bird that seeks to connect with nature. In this lies a few challenges. First, not everything sings Fe's song. Much like with any language barrier, there is resistance. But in offering aid, Fe can connect with other animals and learn their songs. Then, those songs are used to open up other areas of the game that were previously blocked off. Finally, Fe must use every tune it learns and every relationship it fosters to help cleanse the woods of the invading Silent Ones. While the game can be completed in an evening, the adventure covers a lot of ground.

The initial appeal to Fe, much like with any game, is how it looks. With a visual style all its own, Fe combines a very simplistic, almost childlike presentation with allegorical symbolism. Connecting with the world and man's influence on nature are two of the stronger themes, but the true heart of the game lies in how Fe deals with both of those themes. In every area, there will be Silent Ones waiting to trap Fe with a shoot-first prerogative as they continue to take control of the forest. On the flip side, fellow animals and plant life will be there to help once Fe has learned to communicate with them. Among all of this are some spectacular and touching moments that convey a deep connection, even in the brief moment that the connection took place. Watching Fe match the rhythm of local flora and fauna touches on some much-needed concepts in today’s world: openness, reaching out, and learning about those around us. Everything in the forest has a song, and with this musical focus comes a wonderful and tranquil soundtrack. It never overextends itself too far, and it never grows too strong to deject from what's going on. Fe has its song, and every creature has its own. As previously mentioned, Fe must find a way to interact with the rest of the woodland creatures, learn their songs, and defeat the Silent Ones that have begun taking control. All of it is a feast for the ears.

While there are plenty of charming moments, the game itself has an uncanny habit of getting in its own way. Character control while platforming is shoddy. A common way to get around is by climbing up and jumping between trees, and this includes a rather intriguing scenario with an early deity. The problem with this scenario, like with many platforming sections, lies in how shoddy controlling Fe can be while going from tree to tree. The game also takes liberties in moments like this to turn the map into a bit of a puzzle, which, if executed more organically, would have been quite special. This is a common occurrence throughout the game, as a linear path opens up into an area with paths that are deliberately blocked off rather than cleverly hidden. Many of these open areas are also quite empty. A warm smile appears when the world responds to Fe's song, but few of these interacts leave a lasting impression. After the first hour or so, utilizing songs begins to feel more like a utility rather than a means of conveyance. Sing to the flower, and it lofts Fe to the ledge. Sing to the bird, and it flies you to another ledge. This game has plenty of charm, but it's in these more routine and functional moments that it loses its heart. It's surprisingly easy to get lost in this world. Still, with the aid of your little bird companion, the way can be found in no time. However, having to redo segments simply because Fe ends up over jumping or sliding off the platform altogether dejects from the ultimate goal. To make things more frustrating with platforming, input is delayed when jumping. Without calculating it, the time between the button press and the actual jump felt about a half second too long, considering how sensitive some of these sequences are. This frustration is there from the start. The game is simple enough to be able to accommodate its shortcomings, but learning each new ability and traversing each new area will require further learning on that accommodation. It's in this, among all the other game's squabbles, that it hurts the most.

Despite all of its issues, Fe still has a heart that's hard not to recommend. Let it be known that Fe is no Abzu, and it's certainly no Journey. It's a beast all its own, and with enough time and effort, this little creature, Fe, can be tamed to reveal something quite special.

Fe features a charming aesthetic and a wonderful soundtrack that elevates with every beat. However, it suffers mechanically in key moments, requiring enough compensation to detract from the game’s overarching intentions. Still, there’s something here, but it’ll be behind a struggle.