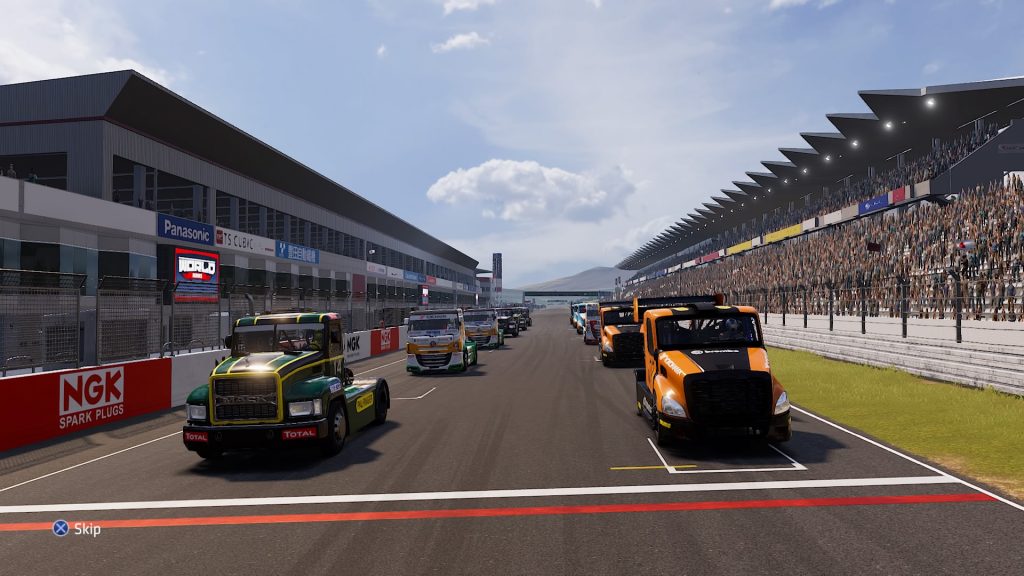 Vietnam, India and Nepal hold annual elephant races, which despite the highly questionable animal welfare issues, attract many thousands of people and involve Proboscidea Jockeys attempting to steer and jostle large, heavy and inertia-laden mammals at relatively low speeds on specially designed courses. This ‘sport’ has yet to be immortalised on modern gaming devices. However, Big Ben Interactive and N-1 Racing have come up with the next best thing….

The FIA European Truck Racing Championship has landed with a colossal thud and features 45 trucks in their official livery, 14 circuits across two continents and a huge line-up of licensed real-life drivers. As a refreshing change from the usual car-based racing games, it seems like a promising proposition.

On loading up the game, the usual options are all present and correct – solo career (or bite-sized versions of the career if preferred) or multiplayer with split screen (yay!) and online racing for up to 8 players.

Diving straight into the career involves a mandatory and long-winded licence test which familiarises you with the feel of the trucks on various track sections. Braking not only involves longer than usual braking distances but also requires the brakes to be cooled with a press of the O button. Failure to cool the brakes and keep them within 250c-500c means they become damaged and less effective, but managing your limited water supply means you have to be frugal on the brakes and coast around corners when possible.

Once you’ve got your licence, you can choose to start a racing season in the European Truck Championship, or the World Series. Aside from the obvious difference in locales, the European vehicles are flat-faced and less aerodynamic than their World equivalents, with a noticeable difference in acceleration, but both limited to 160kph during the official races.

Your first season is as a freelance driver, joining teams on a temporary race-by-race basis, but aside from the livery change, there is little discernible difference between trucks/teams.

Once you’ve chosen your team, race length and difficulty level, you arrive at the circuit for the first day of the race weekend with the option of changing the truck set-up before you get stuck into Free Practice, Qualification 1, Super Pole, Race 1, 2, 3 and 4. Seven sessions on the same circuit at less than a break-neck speed with lap times exceeding 2 minutes means there’s a considerable amount of racing involved over the season even on the 3 lap race setting but more of that later.

After the rolling start on each session, you and your corpulent chariot are off, and the combination of heavy brakes, steering and the low growl of the engine immediately hammer home how this differs from your usual high-octane car or bike games. Your slow-accelerating beast feels incredibly weighty and filled with inertia, yet there’s a good sense of speed from most of the available camera angles once you’ve got over 100kph. The most usable camera position is within the cab itself, enabling you to steer your 5 tons of steel through the corners as fast as possible whilst correcting a potential spin before it occurs.

During the races themselves, the eleven other A.I. drivers jostle aggressively, often forcing each other (and you) off the circuit so giving them a wide berth is often the only way to overtake without a forced spin from behind. Warnings and time penalties are dished out during races for rear-ending other trucks, leaving the circuit or hitting a corner bollard so vigilance is essential for winning races.

The A.I. can be somewhat strange though, with the other drivers seemingly oblivious to your existence, and large pile-ups often occur which involve having to drive around a gaggle of trucks all stuck on one corner unable to escape one another’s embrace.

The varied selection of circuits have all been well-rendered, with some rather impressive lighting effects present during low-light and wet races which make for an immersive racing experience. The trucks themselves are lovingly recreated here in exquisite detail and although the frame-rate seems rather low at times, ETRC does a good job of making you feel like you’re in the game. The lack of any real damage modelling is a shame though, with nothing other than a crack in the windscreen for even the heaviest collision.

The engine sounds and tyre squeals are satisfyingly realistic, punctuated only by the whine of the female commentator who simply won’t cease telling you to pour water on your brakes…

After you’ve completed all seven races in either of the two seasons, you are then offered a contract for the following year, which also enables you to unlock various upgrades for your vehicle as you earn points for your team.

The man don’t give a truck

If all this sounds quite positive and you’re getting close to realising your truck racing dream, unfortunately it’s time to burst your bubble.

Aside from the occasionally enjoyable online races (when one can find other players) the main meat of the game is based around the single player Career mode and herein lies the biggest problem. As an admirably authentic simulation of what is an incredibly niche sport, ETRC ticks the boxes, but also forces the player to adhere to the sport’s weekend race structure.

In order to progress through the season, an enormous amount of time must be spent grinding through four races on each circuit (not including the practice and qualifiers) and by race four of each ‘weekend’ even the most patient and truck-obsessed gamer would be thoroughly bored. This is exacerbated by the pace of the events inherent in the speed of the trucks themselves, so one race of 3 laps at around 7 minutes would be fine, but having to repeat this three times again afterwards is nothing short of tedious. The weather may change but there’s no discernible difference in grip and the lack of complexity in the driving techniques isn’t enough to spur you on.

Despite N-1 Racing’s obvious enthusiasm for the sport, ETRC is stymied by the tedious structure of the Career modes and subsequently highlights the rather shallow nature of the racing itself. With some expansive damage modelling, ‘drafting’ or a kudos system added during the races and a simple choice of how long the race weekends are, things could have been so much better.

FIA European Truck Racing is out now on PS4.

An admirably niche racing game which gets the look and feel of truck racing just right, but manages to get the single player career experience all wrong.