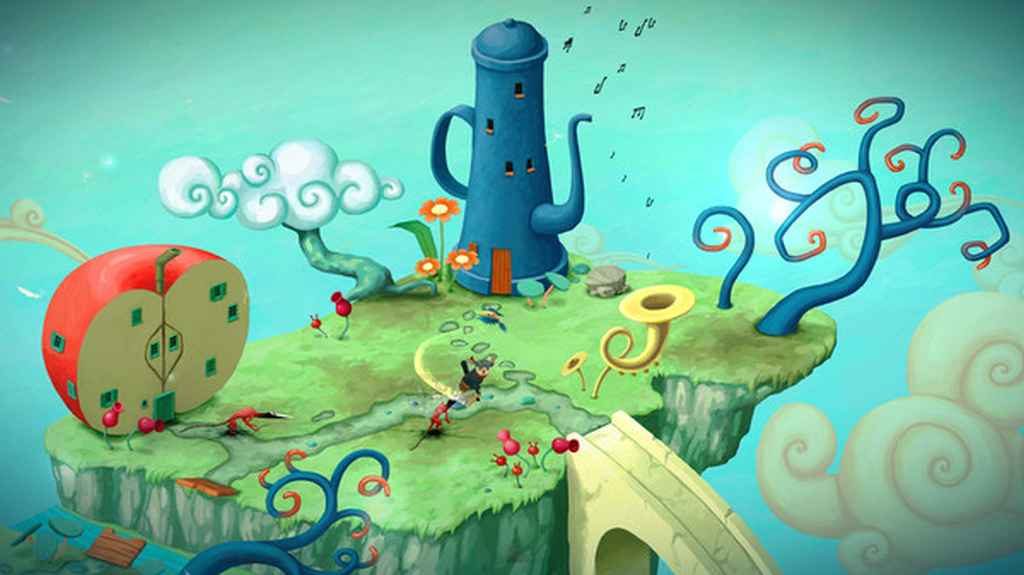 The mind is a fragile thing and many games over the years have tried to convey the messages of trauma and mental illness to its players. Recent games like Hellblade: Senua’s Sacrifice and Night in the Woods have done a great job at portraying the unreal pain and anguish that can come from the troubles of the mind and depression. Figment, while not being as focused on mental health issues as the aforementioned games, does take a slightly different look at these serious subjects while being at the same time, a whimsical and very lighthearted effort.

Figment takes place in an imaginative world of ‘The Mind’. You control an old warrior called Dusty. He was once the ‘Courage of the Mind’ and battled nightmares in this strange realm. At the moment he wants nothing more than to relax and be left alone. His sidekick, Piper, encourages him to once again take up his sword and defend the mind against the new nightmares that now threaten it.

Most of the time Figment acts like a standard isometric action platformer with a few puzzles thrown in. It does have a rudimentary combat system that’s very shallow but serves its purpose well enough nonetheless. You have an attack button, an evade button and can charge your attack up for a heavy blow. As I said, it’s very basic but the combat system was never this games focus. Killing the enemies and the bosses littered throughout the game was never an issue, attack, dodge, attack – standard fare really.

As you ponder your way through the left and right side of ‘The Mind’ you now and again get thrown a puzzle to complete. While they were never overly difficult I did enjoy them and they were a nice addition to the gameplay. These included your usual switches to hit and boxes to move and went all the way up to piano puzzles and some more in-depth problems that I will not spoil for you. They were all nice and fun to solve, without being frustrating or annoying.

While battling through this beautiful dreamscape you will come across two types of items. The first is endorphins, which when you have collected enough increase your health meter by a segment. You normally got these from killing enemies and completing tasks. Also dotted around the world are health pickups, normally attached to trees and environmental objects. These orbs help you when you have takes a few hits in battle and can get you out of a pinch when required.

A light Hearted, Yet Strong Message

Scattered throughout your journey are memories to collect. Normally hidden behind puzzles or in out of the way areas, these memories show troubling scenes and quotes that induce the nightmares you must battle. One thing I really liked about this game was that even though it tackles serious issues and themes, it never threw them in your face or was overbearing with them at all. The messages are nicely conveyed and I really appreciated that.

The graphical style of Figment along with its sound design are its best features. It’s absolutely beautiful to look at, with the visuals being all hand drawn, bright and incredibly attractive. The world is full of abstract objects and uncanny characters to interact with, too. It was a pure joy to meander through its colourful world and meet its many inhabitants; one minute your walking up a bridge of pencils then you are stepping across massive clock faces. The art style is simply pure magic.

Music to my Ears

In a similar vein to its graphical design, the sound design in Figment is amazing. It’s incredibly moving soundtrack fits the style of the game so well, it really accentuates the poignant parts of the story and increases the tension when required. The voice acting, for the most part, is very good too. The bosses sing to you while you fight them, normally in rhyme and it’s all very well done and it really makes them stand out and feel unique. There were just a few minor characters whose voice acting felt a bit forced but this was very rare and not too bothersome overall.

Technically speaking, Figment performed to perfection with no issues to report at all. It ran very smoothly and was very stable throughout the six hour campaign. I had no bugs or crashes and was just able to sit back and enjoy this little title and what it had to offer. I soaked in the emotional story, enjoyed the lovely sights and sounds and had a really good time doing so.

Overall I really enjoyed my time with Figment. It is a really stunning game, the sound design is top notch and it has moving themes throughout. It does not overwhelm you with its views on mental illness which I loved. It’s a very light-hearted take on the subject and I really liked that. The combat and gameplay were perhaps a bit simple but I can see this being something you can play with your children. You could have fun and maybe even take something away from it about fighting your own personal nightmares and fears. Figment is a breath of fresh air and an enjoyable one at that.

Figment is out now on PS4.

Figment is a very attractive, fun game that tackles some serious issues. It however tackles these issues in a very light-hearted manner and I appreciated that. It's perhaps a bit easy and simple but it's fun, bright and colourful. It will not take up much of your time but you may just take something away from it about fighting your own personal nightmares.