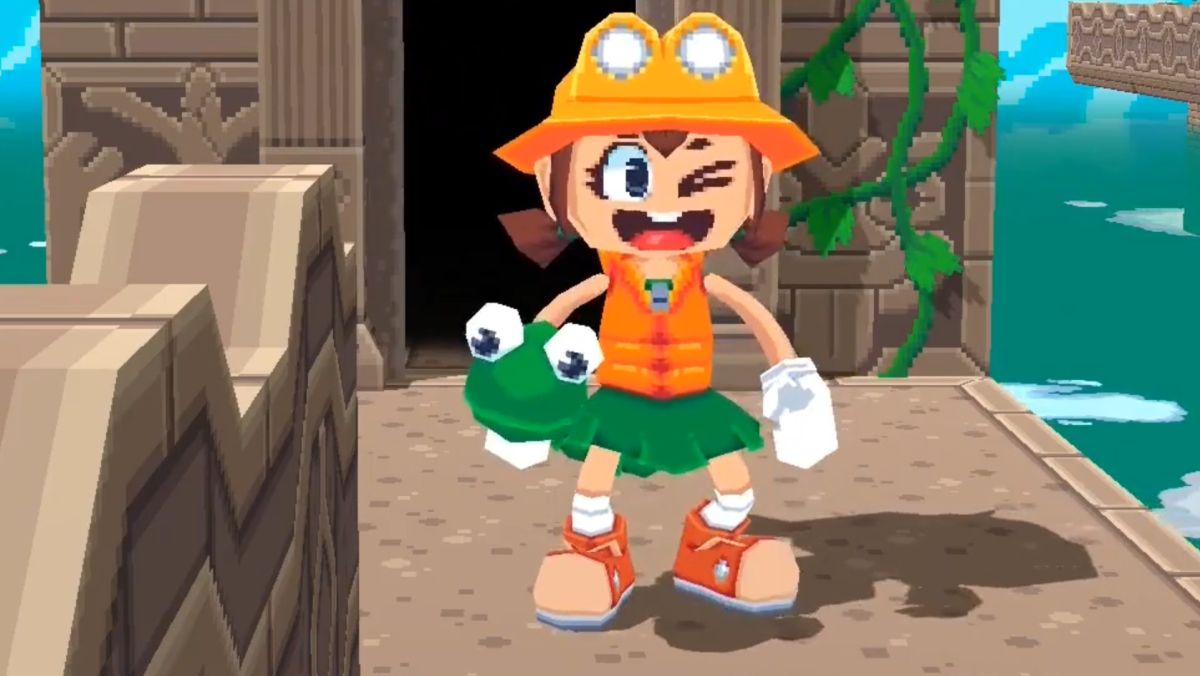 Frogun PS5 Review. Developed by the folks at Top Hat Studios, Frogun’s striking visuals and level design are heavily inspired by the PSOne era, with falls having the fog of war-style of effect prominent in so many classic 90s titles. However, Frogun manages to differentiate itself from other nostalgia-coated offerings thanks to some interesting mechanics, even if there’s a few bumps along the way.

Oh God, What Has Science Done?

Frogun kicks off as Renata has discovered their parents have gone missing, but not all is lost; as the pair were adventurers by trade, you decide to use the tech that they left behind to help track them down. This fancy gizmo is a part gun, part frog creation that also happens to be a sentient object, which makes you question a lot of things about your parents in the process.

The main focus of the game is to use the Frogun to help navigate your way through all the different stages. Essentially, this is a traditional old school style platformer with a very interesting twist.

The Frogun almost works a bit like a whip allowing you to tackle puzzles and other interesting aerobatic manoeuvres. At the start of the game, you only really encounter very simple puzzles, and even though there really isn’t any kind of upgradeable skill system, the game will add twists into how the levels are designed which see you utilising the Frogun in ways you probably didn’t think of at the start.

The development team achieves by slowly introducing you into all of these new ways of thinking. As an example, later on in the game you eventually learn how to move about in the air to grab another pillar to jump between areas, but at the start you don’t need to do any of this. I will admit, with some of these I had problems aiming after shooting the Frogun for the first time, and not often but sometimes it felt like you were fighting against the camera.

Frogun is all about adding simple puzzles that over time combine with each other to make things slightly more challenging. But nothing feels like a huge difficulty spike; everything feels like it progresses naturally without any artificial spikes. If you are struggling though, there are often Frogun symbols near major puzzle locations that will remind you to look around the room and maybe pay attention to certain environments. While at the start of the game this didn’t seem too useful, eventually, as I made more progress, I found myself using the tips quite often to try and work out what I was meant to be doing.

So Many Shiny Things, So Much To Collect

Frogun features an overworld that reminds me a lot of the original Crash Bandicoot titles, in which you move your character from zone to zone as you unlock them. Each stage has different collectibles that you can hoover up with each run, which are often hidden throughout the level in puzzles that are slightly more difficult than the standard riddles.

There is also a timer for each level, and if you complete a stage before it runs out, you also get a reward. This means it’s a good idea to repeat levels so you can gain access to these extra goodies. For example, there are chests you can find in the overworld zone that need the gems you obtain from completing standard levels, which reward bonuses such as extra health points.

However, not all levels are simply puzzle-based. Some stages require you to win races, such as against a chap named Jake, who is convinced you’re trying to beat him to the treasure and challenges you. At first I found these incredibly frustrating as I tried to rush ahead, because if you touch your opponent it counts as hitting an enemy and you take damage. It also doesn’t help that at the start of the game you die after taking just three hits.

There is a concession in that you have unlimited lives, but you will lose a reward if you do kick the bucket. With some of the levels being very restricted in movement, it is actually best to try and take your time, then sneak ahead of him when you can – the AI isn’t exactly the smartest.

Though the races have the same secret items that standard levels do, even if you are gonna win the race, best to go ahead and try to collect them if you can. Also often there will be some extra part of the level after the race, the item to exit the level will be there but you can go explore once you have won the race.

Frogun also features challenging boss fights to tackle. These function like the game’s puzzles in the sense they start with very simple mechanics, but then stack different mechanics on each other so that you have to memorise them. My only issue with the boss fights is, even though the game has a very generous respawn/checkpoint system, if you die and restart the boss you need to watch the same cutscene all over again. As such, it would be nice to be able to just skip them.

I Don’t Hat This Much

Every level, including the boss, race or even the traditional stages are stuffed full of coins, which can be used to purchase different items such as hats and artwork. The hats can be unlocked for purchase by playing through the game, although it would have been nice to preview them on the character.

Still, this is a minor niggle as there is a huge chance you are just going to buy them all anyway due to the amount of coins you can earn (the amount of art works you can unlock is a nice selection, too). Finally, this menu also has achievements you have unlocked and a bestiary of all the different enemies you have encountered in the game so far. 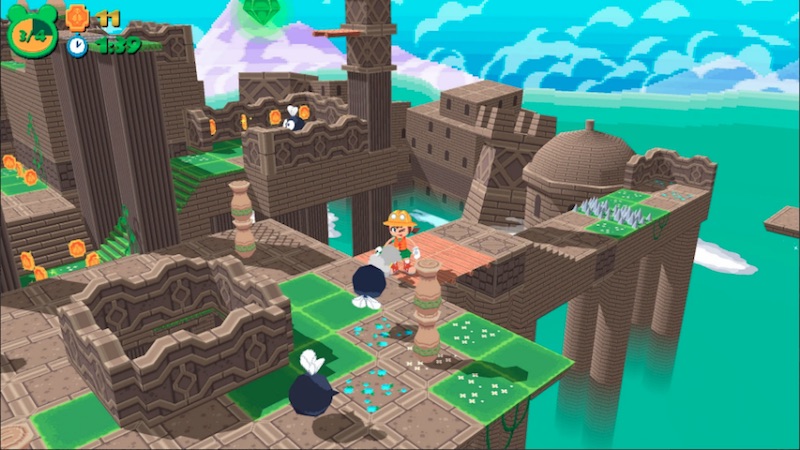 Once you’ve grabbed the hat you like, you can access a comprehensive Photo Mode via the pause menu during a stage. Here, you can customise the camera angle and get your pose on so that you can show off the sumptuous environments and Renata. Meanwhile, there’s also a screen filter system for those who want a retro CRT-style experience.

Though I’m personally not a fan of most of the filters – the game looks fine without them, to be honest – having optional choices for people who want to add an even more retro feeling to the game is never a bad idea.

Overall, Frogun gave me a lot of enjoyment and managed to pack an interesting story under its shiny retro hood. The platforming starts out pretty easy but the action gets a lot more challenging as you continue without feeling arbitrarily difficult. I did have a few issues with the camera during platforming segments, but this was again a very rare experience and isn’t a game-changer. If you’re into anything retro, then Frogun is definitely worth a punt.

Frogun is a fun, nostalgia-filled trip through 90s platforming with some interesting twists to keep things fresh. There's a couple of niggles along the way, but overall, if you're into classic 90s gaming, make sure you give this a shot.