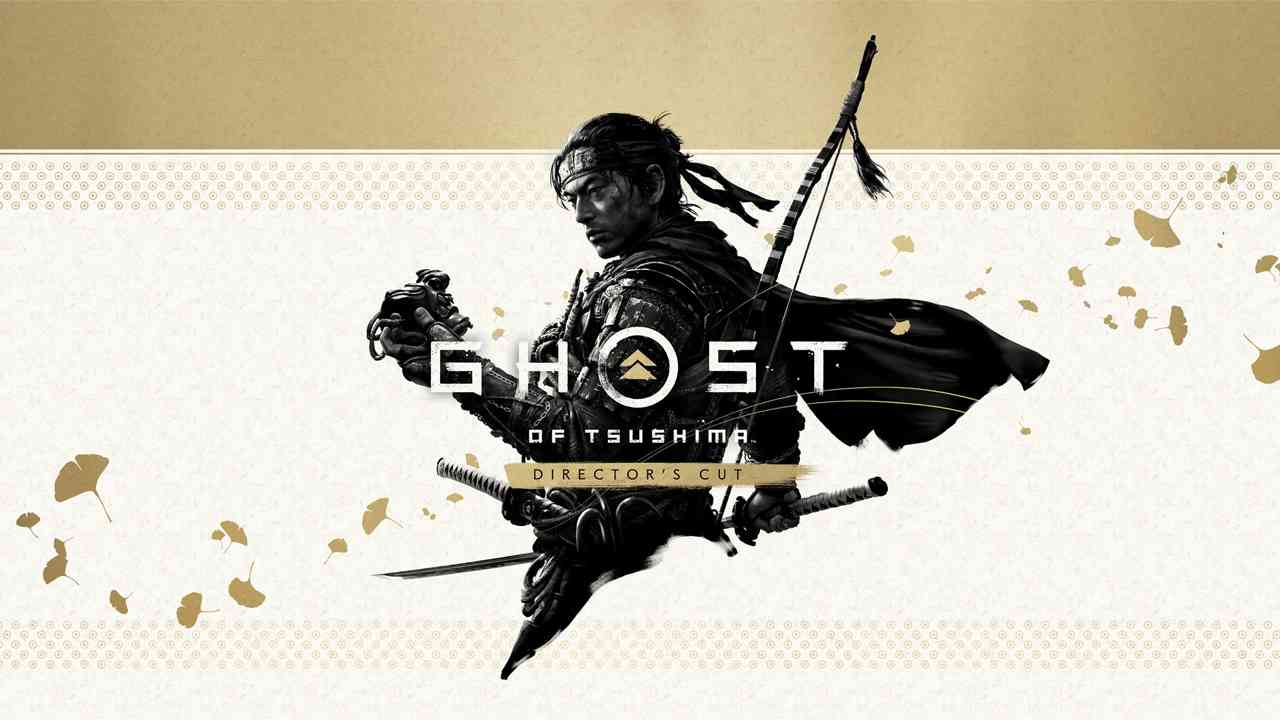 For our review of the main PS4 experience, be sure to check out our full Ghost of Tsushima PS4 review here. For comparison, we gave the PS4 version a 9/10 score.

It shouldn’t come as a surprise to anyone — the PS5 version feels like a proper next-gen upgrade. By far the biggest change is the blazing fast SSD speed. There are no loading screens, fast travel is instant, loading into the game is instant, and it runs even smoother than it did on PS4. Owners of the PS4 version will be happy to know that their save game carries over to the PS5 version.

You can transfer it either via the PlayStation Plus Cloud or via a USB flash drive. Upon booting the PS5 Director’s Cut for the first time you’ll be prompted to import your save. The process is very simple. If you happen to use the offline method via USB, you’ll need to back up the save through the PS4 Settings and copy it to USB, then switch to your PS5 and boot the game there, insert the USB device and it should automatically detect your saves. 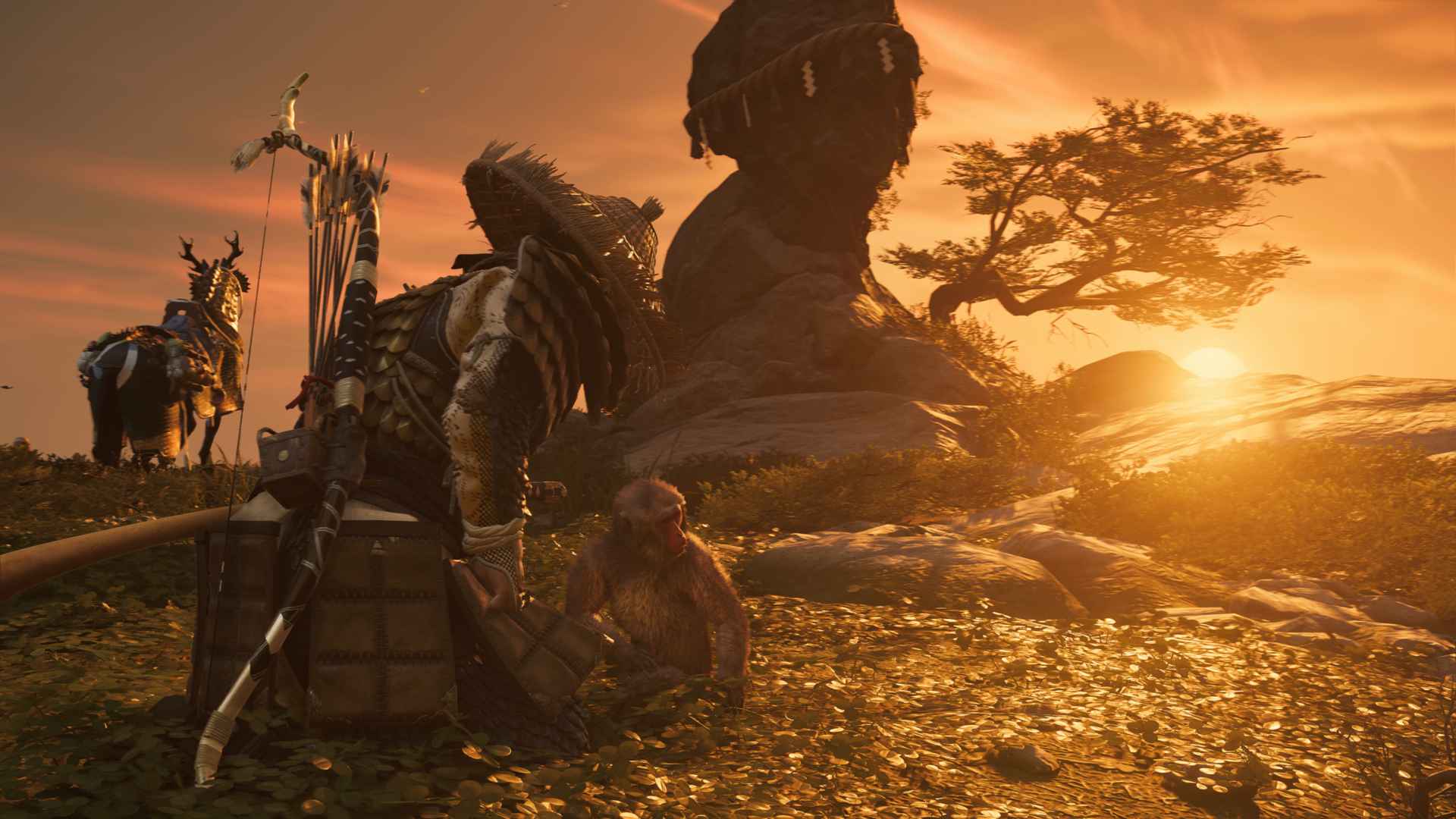 It even carries over your trophy progress, meaning your PS4 trophies automatically unlock in the PS5 version, including Legends Mode. No need to redo the trophies.

During my playtime of 15 hours I haven’t had a single frame drop or crash. As far as technical upgrades go, this is everything I expected. Especially for an open world game of this size, the lack of loading times is thrilling and bodes well for PS5’s potential, as does the bump in resolution which provides Ghost of Tsushima on Sony’s latest lump of gaming hardware with a much cleaner image as a result.

The main selling point of the Director’s Cut is its new story expansion, called Iki Island. As a prerequisite, you must have reached Act 2 in the main game. Thanks to the save game transfer you should already be there. New players may need 10 hours or so to reach that point in the main game. If you’ve reached Act 2, you’ll receive a popup notification about the new content and it can be tracked from the Journal. The first quest still takes place in the second region of the main game. 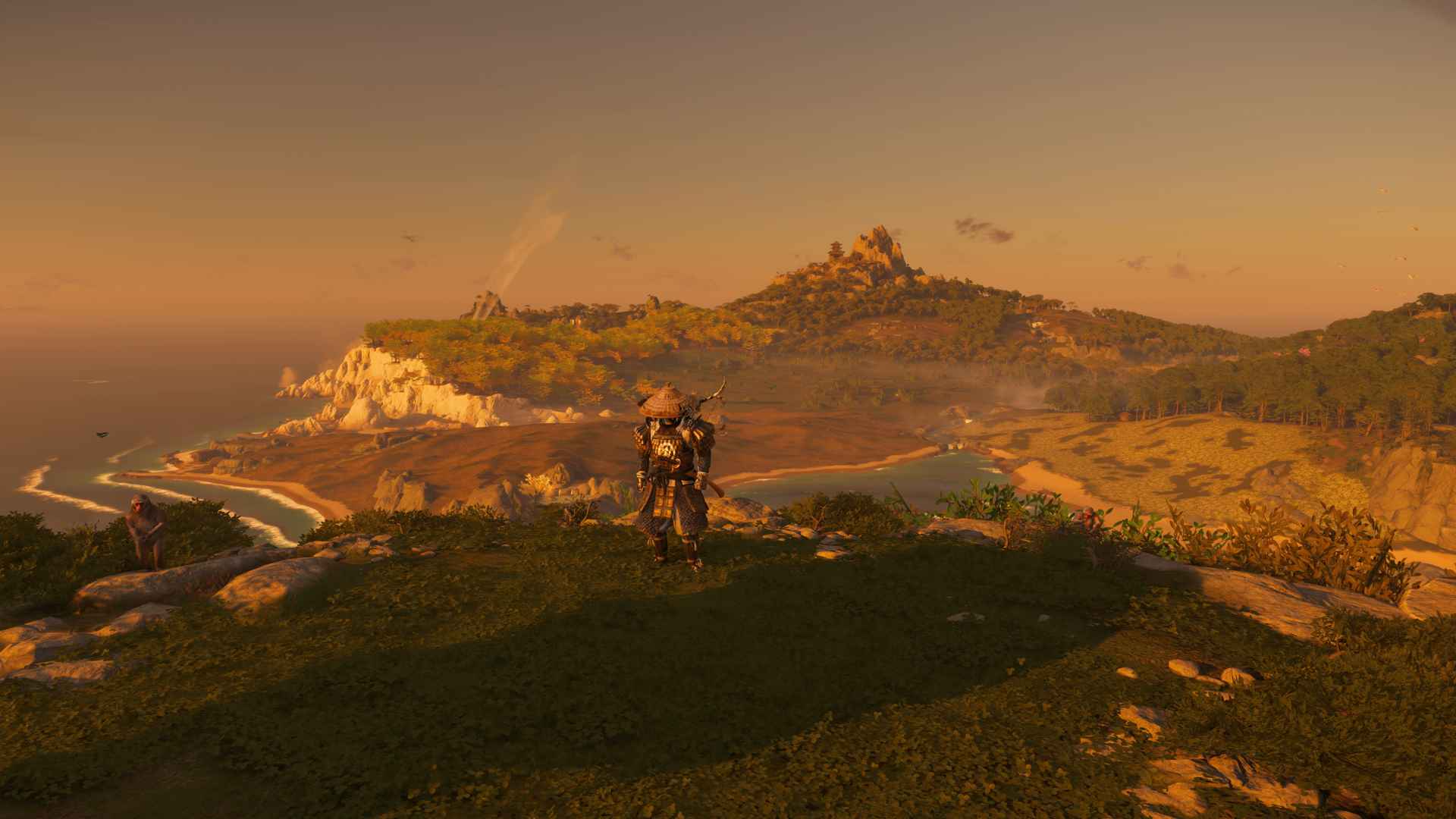 The first few quests are off to a slow start, making you spend time on mundane tasks. But after the first three quests it picks up nicely and there’s one epic battle after another. The story isn’t particularly long, having lasted me only four hours, but those were quality hours that I’d replay a second time. We get to learn a great deal of backstory about our hero Jin Sakai and his childhood, as well as his personal struggles and underlying psyche. The new enemy class – the Shamans – are a good addition that forces you to adapt new combat strategies.

They buff all enemies in their vicinity, making them much harder to kill, so you’ll have to focus on defeating the Shamans first. The other enemies are comparable to late-game enemies in terms of difficulty. Even though I had fully upgraded gear it actually felt harder than most of the main game, thanks to the unique combat strategies employed by these Shamans. Even experienced players will find the combat engaging, especially on higher difficulties. Beyond the story there is another six plus hours or so worth of side quests and collection items, so there’s still a fair amount of content to get stuck into here.

There’s no getting around it – Iki Island is hands down one of the most gorgeous game worlds I have ever seen and a real tribute to the artists at Sucker Punch Productions. The main game was already beautiful but somehow, Iki Island tops even that. 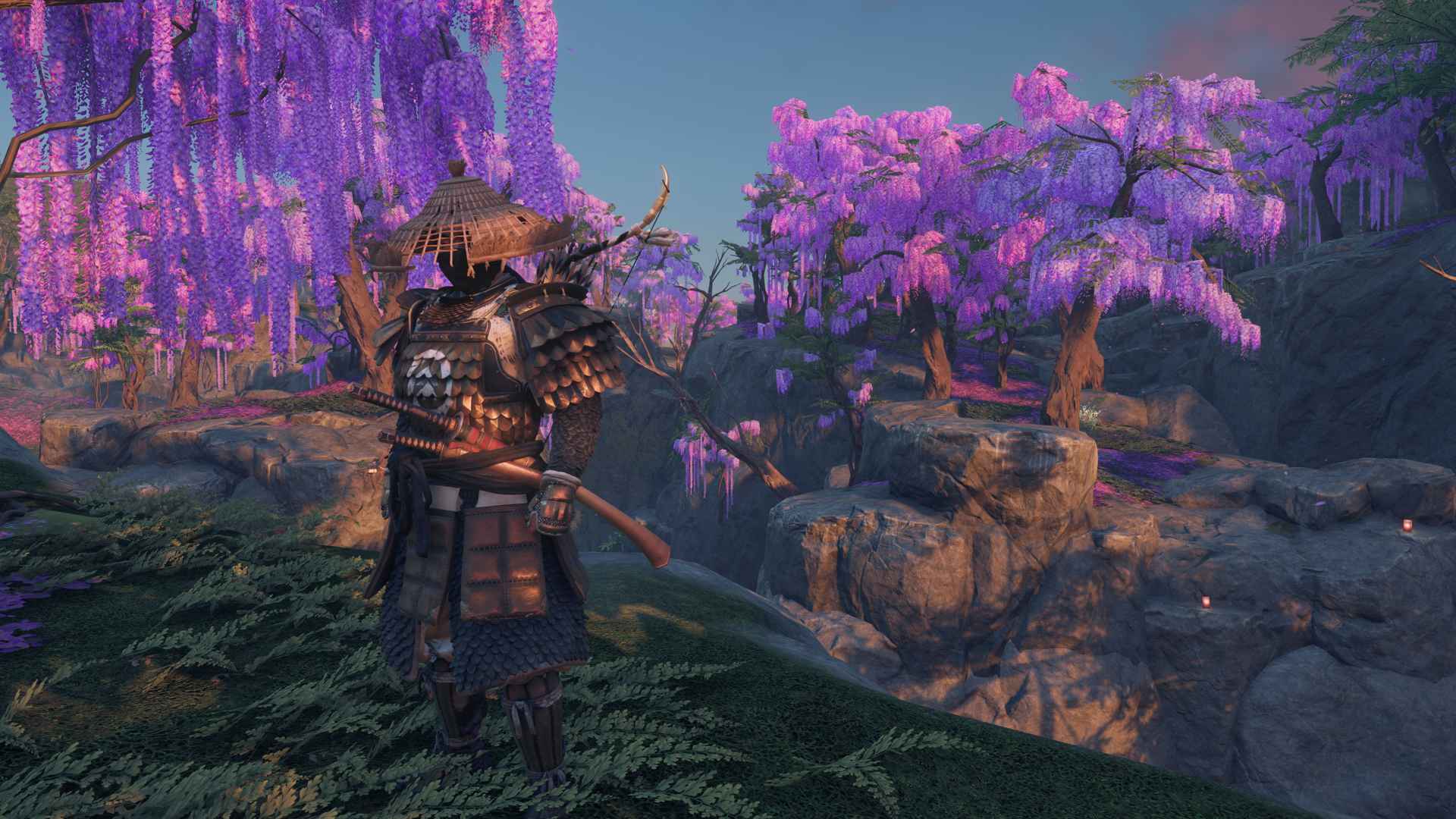 I often found myself slowing down to look at the pretty environment, the new flora and fauna; and to pet some cute monkeys and cats in the process. Additionally, a new collectible class called Animal Sanctuaries brings to light a best use case scenario for the PS5 controller’s motion sensors. It makes you play flute to befriend Deer, Cats, and Monkeys (how cute is that?) and you need to tilt the controller up and down to find the perfect pitch. It’s surprisingly accurate and a neat feature not many games use. In general, the new collectible types are all unique additions.

There’s one type called “Memories of Your Father” that lets you play as young Jin Sakai to relive his childhood. These provide additional backstory and are worth checking out. There are new puzzle shrines that will keep you wondering what to do, Archery Challenges with different tiers of medals to win, and a Duel Arena. The Duel Arena is particularly fun, each duellist uses a different stance and technique and they took a few tries to figure out. Pretty unique Collectables, unlike most other games.

In terms of size, Iki Island is smaller than any of the three main game regions, but that’s okay. It’s still fairly sizeable, not crazy big, not too small. There are also new Mythic Tales and Side Tales and new Skills. One of the main skills is the Horse Charge which lets you trample your enemies to death. You can even find new horse gear and dye to pimp up your style! If you wanted to 100% Iki Island it will last you well above ten hours which is solid for an expansion. 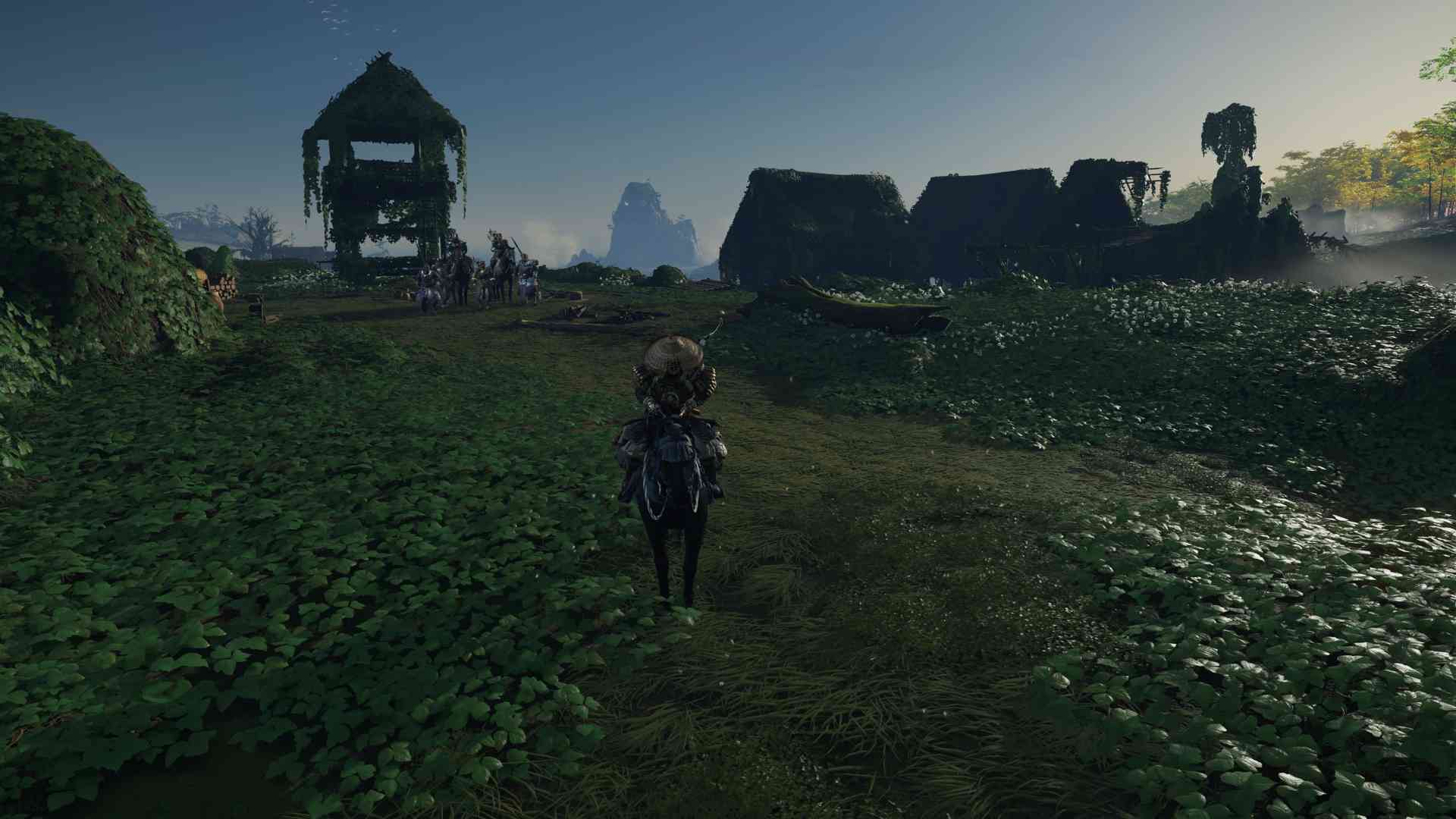 A Great Game Made Greater

That said, Ghost of Tsushima: Director’s Cut grandly stakes its status as one of the very best open world games on PS5 that proudly stands alongside the best games on the platform. If you’ve been holding off playing Ghost of Tsushima, now is the time to get playing.