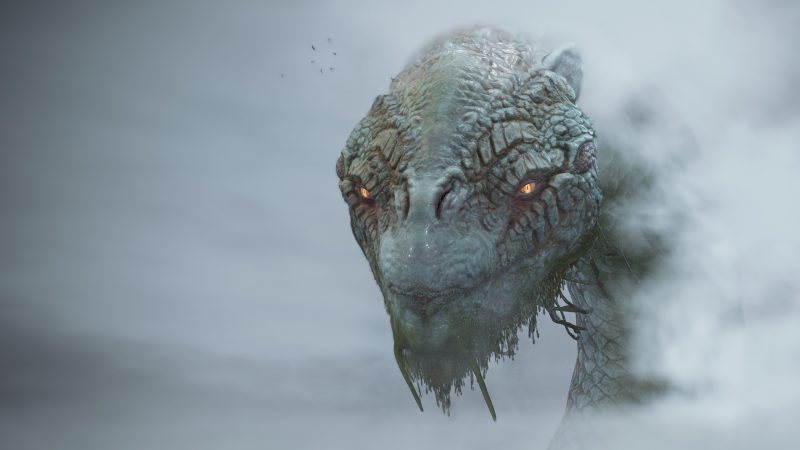 In fact it’s the third, but there’s something different in the air about this port. God Of War coming to PC represents a step forward both for PlayStation and its community of players, and thankfully this port put its best foot forward.

Did You Change Your Hair, Kratos? 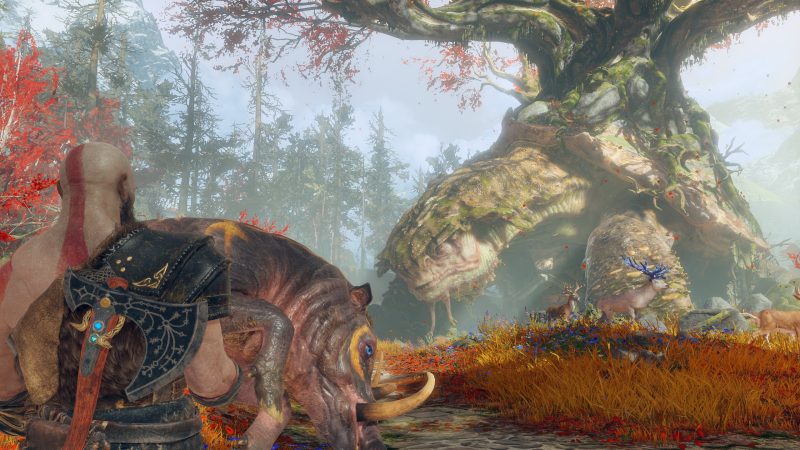 First off, since this game has been out since 2018 I feel it pertinent to tell you I’ve played it three times through, before jumping in on PC. After another 19.5 hours according to Steam, I’ve now played it four times through.

I absolutely adored it at launch, and getting back to it on my PC transported me back to those early memories. What is especially amazing however, is that the same awe I had when I first played God Of War on my new PS5, after it had been patched was captured again on my PC.

Whether 4K or just 2560x1440p, which is how I played it on my deck, this game will take your breath away. It was practically shocking that it looked that good, while running so well. It is clearly very well optimized, as I had absolutely no problem holding a steady framerate without compromising the visuals while playing on my low to mid tier build. You can check out my detailed PC specs at the bottom of the review below.

Each moment, narratively and visually was still impactful the way it was when I first played through them. It’s a wonder and a joy to play it on PC as a long-time PlayStation fan, knowing that so many more players can now experience this amazing game.

Taking Off The Kratos Tinted Glasses 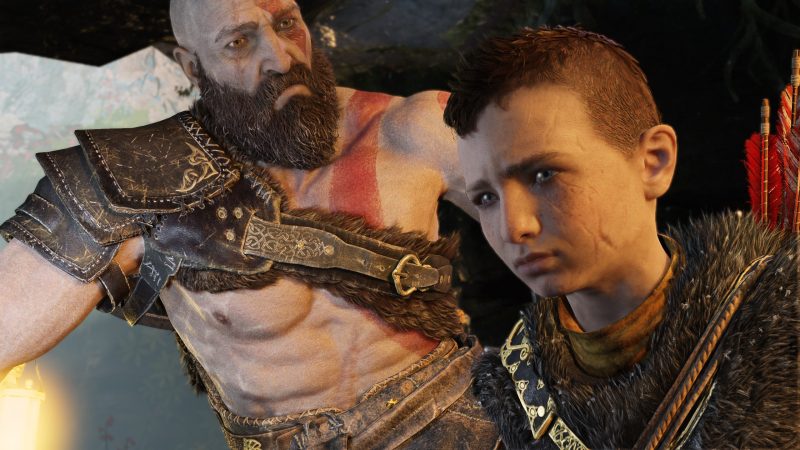 This whole review won’t be in absolute praise of everything, God Of War does however. There are choices that, – of all things – add monotony to an otherwise varied and fun fighting system.

Namely, the enemy variation. I’ve played the game one each difficulty level, with my most recent one being on Hard. It’s not a boast, only a distinction that when you play on those higher difficulty levels, the lack of variation within the different creatures you fight becomes so much more apparent.

Some enemies are distinct, but you’ll be given more of the common variety drauger and undead far more often than fighting unique creatures like Nightmares. Even those however have their limit, when you start to just see elemental skin differences of every enemy type.

These changes from a “Frost Nightmare” to a “Poisonous Nightmare” to a “Fire Nightmare” did little to add any variety as to how you dealt with them, and the same goes for other enemy elemental variations. Your arsenal stays extremely consistent for the whole game, and it is fun as heck to throw and swing the Leviathan Axe around.

That doesn’t change the fact that encounters do end up feeling repetitive. The most egregious encounters though, are unfortunately the boss encounters. All of the main campaign bosses, barring The Stranger and a dragon are very literally the same kind of troll or ogre with a different elemental variance. 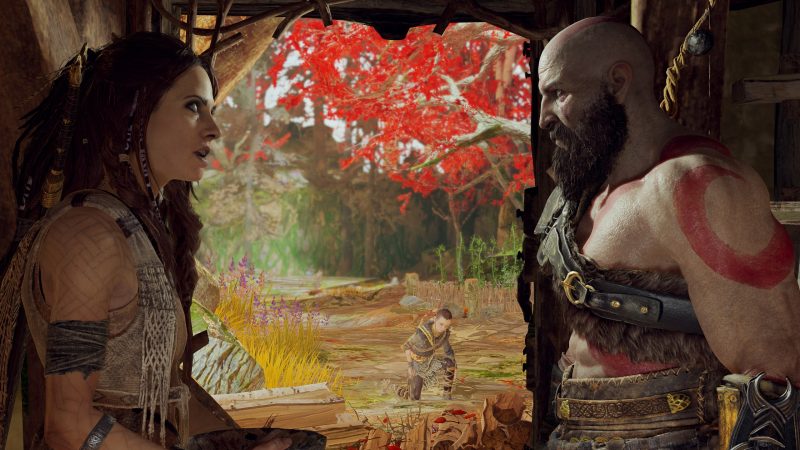 There’s little to no difference in their attack patterns, and by the end of the game the process of killing them really does feel monotonous. It’s unfortunate because at its best, the combat is intense, challenging, and spectacular all at the same time.

It just feels wasted to keep fighting the same kinds of enemies over and over.

Those familiar with God Of War are likely shouting, “What about the Valkyrie fights?”. I’ve completed each of them, and they are all exquisite. Yes, it is the same kind of enemy multiple times, but they each have a variety to how they fight that helps make it feel fresh. It also helps that they are the most challenging fights you’ll find in the game, which makes them all the more intriguing.

However, those fights alone do not make up for the rest of the game, especially when they are all optional, and can be entirely skipped over. 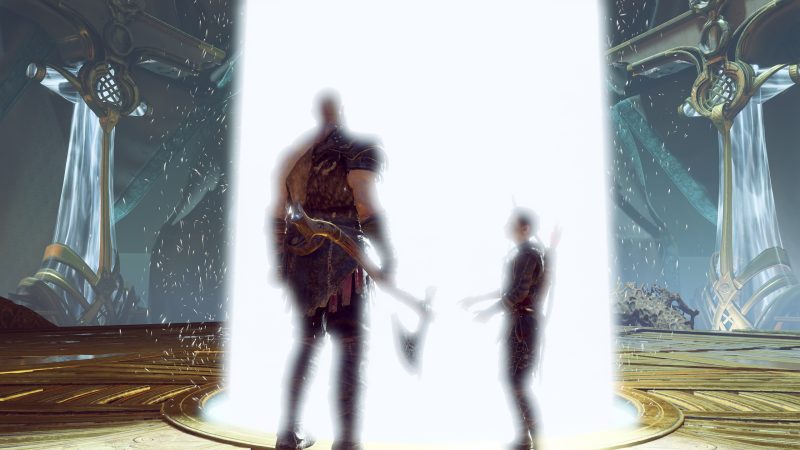 What has been applauded more than anything else though about God Of War, and deservingly so, is the story. Kratos and Atreus’ journey to spread their Faye’s ashes at the highest peak in all the realms is transformative in every sense.

It’s a narrative that I can at least connect with deeply. I don’t think I’ve ever met someone who hasn’t had a problem connecting with their parents, specifically their father at some point.

Of course I’m not alone in that, and watching how they both grow to know one another in a way they didn’t at the start. Playing it again, I found myself actually astonished at how it seemed like Kratos in retrospect, doesn’t really open up that much.

He spares Atreus of the details in most cases, and fails to answer questions at all points of the story. It is clear that it’s difficult for Kratos to open up. I’ve played every game in the God Of War franchise, and well aware of Kratos’ crime and trauma.

Having already had a family that he was manipulated into killing, followed by endless violence and trauma that only ceased when he was near dead and causing unknown chaos – it isn’t surprising to see him be a closed off kind of guy. 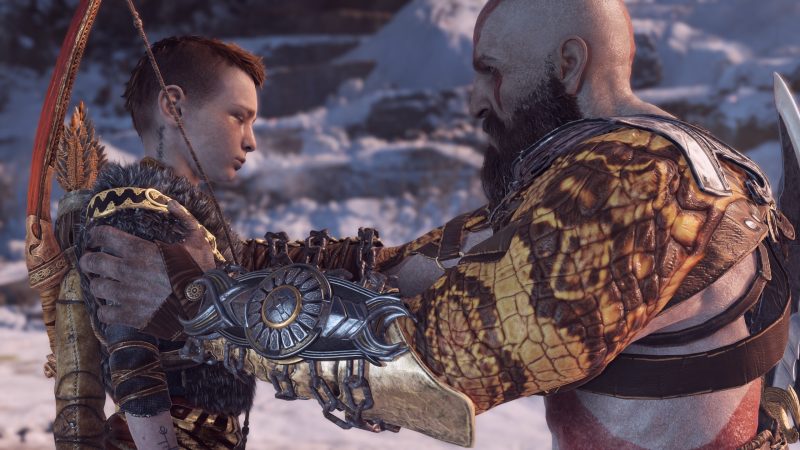 However it was in this playthrough, with God Of War Ragnarok on the horizon, that I thought more about the narrative within the context of its sequel. Maybe this first game isn’t about the big emotional leaps Kratos doesn’t take, but rather the small advances that build a foundation for Ragnarok to take off from.

It didn’t change just how much I knew I would enjoy the story. I just found it to be an interesting guise under which to play, which ultimately helped me understand the game in a new way.

Without giving away spoilers, more than anything it is clear that this is Atreus’s story. It makes me all the more excited for what’s to come, when Ragnarok hopefully releases sometime this year.

Simply put, if you haven’t played God Of War yet then playing it on PC is an absolutely incredible way to do so. It is undoubtedly in my mind the best way to experience the game, especially if you have the rig to crank it up. Or even if you have something more like mine, which was borne out of budgetary needs.

Even if you have already played it on PS5 or PS4, if you have a capable PC I encourage you to pick it up. This game is well worth revisiting and the more we can get amazing first party PlayStation titles like this on PC, the better.

Now Sony – we have Uncharted coming to PC next, I think we all know what should come after that. Grant us eyes, grant us eyes…!

God Of War is now available on PC on Steam and the Epic Games Store.

Played on a PC featuring:

God Of War on PC is unsurprisingly the same amazing game it was on PS4 back in 2018, although its pain points are more blatant years later. The visuals, narrative and stunning experience however do not disappoint and remain as impactful as they've always been. It also helps that this is so far, Sony's best port to PC in terms of optimization. This is well worth picking up, whether or not it is your first time.