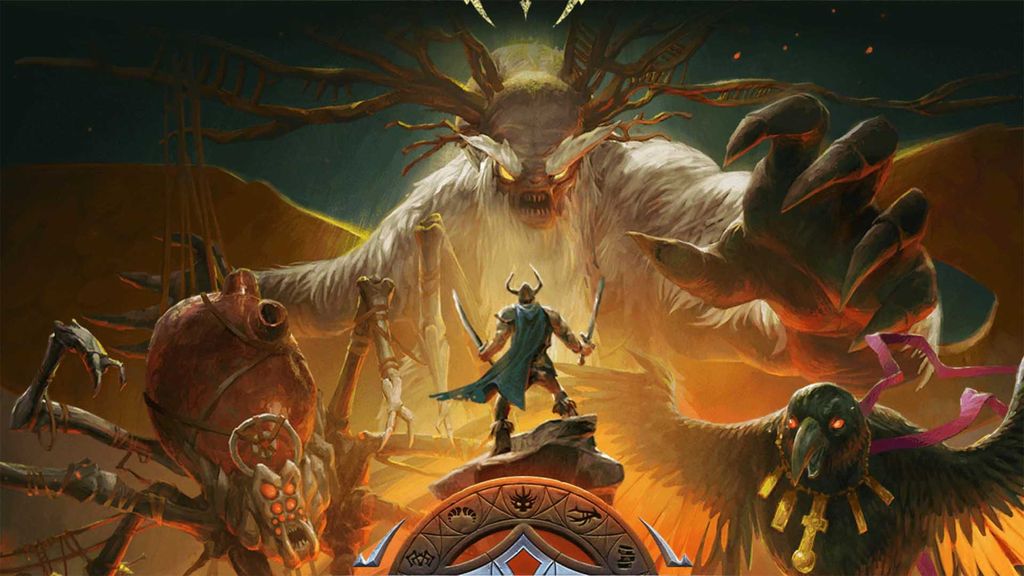 Gods Will Fall PS4 Review – Judging by the promotional material, Gods Will Fall has the look of a truly epic game. A Celtic clan of 8 Berserkers face off against 10 Gods in a battle for humanity’s sovereignty. Furthermore, Manchester-based Clever Beans have added roguelike features to make each playthrough unique. Your warriors are randomly generated; in name, class, skills, and even their stories. The level’s order of difficulty is also generated at random, making Gods Will Fall filled with mystique.

The reality of playing Gods Will Fall is a bit different from the expectation. On one hand, you have a game with all these intriguing features in orbit. On the other hand, you’re often stuck in a void, unable to clasp the game’s potential.

Gods Will Fall begins with a clan of a warriors shipwrecked on the isle of the gods, on a quest to defeat their divine tormenters. In fact, that’s pretty much the entirety of any narrative in this game. From the island, you herd your clan to one of ten level gates, and enter a brave volunteer for a top down hack and slash adventure.

The core gameplay itself isn’t especially fun. Your offence is limited to a normal attack, a strong attack, aerial variants, and throwing items. In addition, the game also encourages parrying via a timed dodged. It’s a very simple and unremarkable control scheme, but the main problems are in its execution. 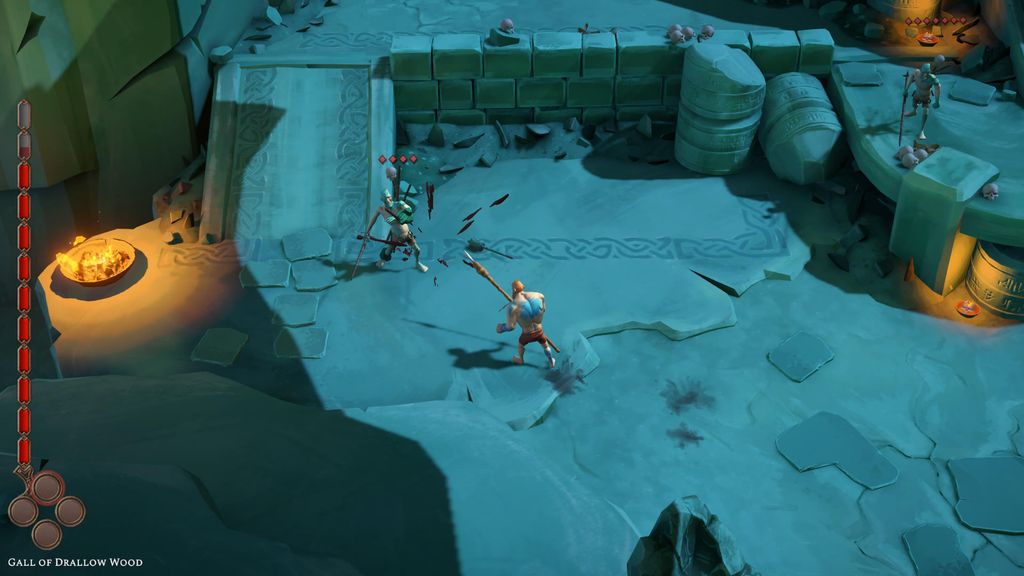 The animations, although pleasing to the eye, are very clunky and the game feels unresponsive at times. For example, ground attacks can be very effective, but getting the inputs to register for one is a nightmare in the middle of melee combat. For a game that encourages aggression, it can only be deemed a big flaw that the combat isn’t very smooth.

Where Gods Will Fall really shines is in its boss battles. Each of the 10 Gods come at your warrior with a unique offence. As a result, there’s a nice level of variance on how you employ the core mechanics. On one fight you’ll be dodging surrounding tentacles, and on another, you’ll be deflecting projectiles to secure your victory. Each boss has its own learning curve and a unique sense of satisfaction upon their defeat.

Whilst the boss fights are the most fun part of the gameplay, they are unfortunately only a fraction of the whole experience. Due to the randomised nature of the game, you’ll end up stuck perpetually attempting a level, and never reaching the boss. Furthermore, this tedious process can end up repeating after each of the many permadeaths.

On every playthrough, the difficulty of each level and the enemies within are assigned at random. Consequently, you have no idea what you’re getting into upon entering a God’s realm. Each failed attempt will rob you of one of your warriors permanently, as will backing out of the level. As a result, the likelihood of finding the easiest realm to enter early on is quite small, and your undeveloped warriors won’t have a great chance of survival. 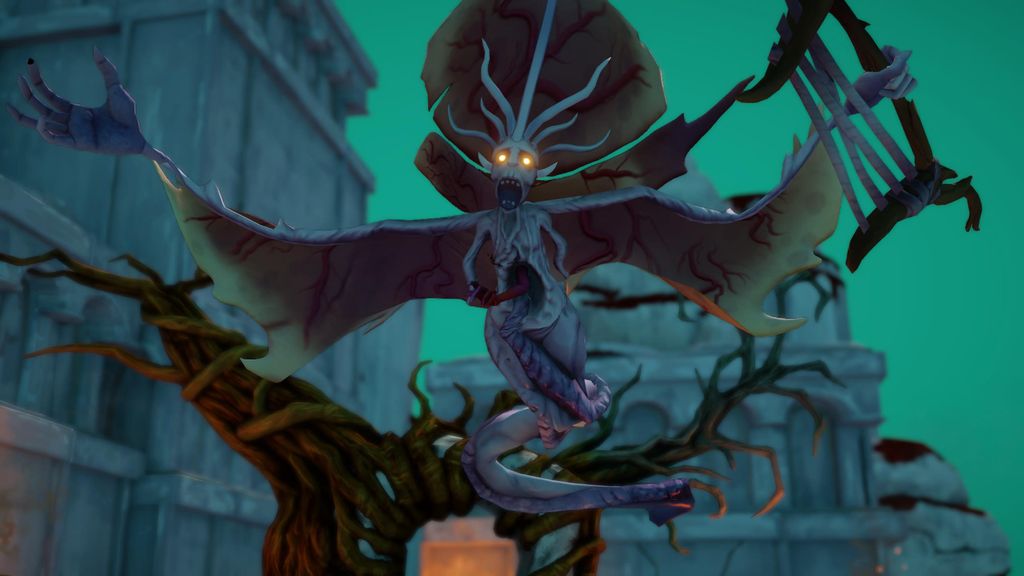 A Unique Picture For Every Playthrough

Whilst the random elements of Gods Will Fall can be frustrating, when you do manage to get on a good run, it can be great fun. Your warriors are randomly assigned names, classes, skills, but best of all, stories. If you manage to progress past a level, you’ll see personal stories and relationships emerge between the clansman.

Each playthrough is unique in this sense, and as a result, you feel very invested in your team’s survival. It’s all the more gutting that they will probably all be murdered at the first hurdle.

Another nice feature for Gods Will Fall is in its rather lovely art direction. There are times where the world map and the God Realms look like Bob Ross hand-painted canvases. The level’s designs themselves vary in how interesting they are, but they almost always deliver a breathtaking feel of depth. Again, it is just a shame that you’ll end up bogged down on the same parts, and unable to experience the full map most of the time.

The character designs and their animations work well in the environment, even though there is a slight clash of styles. The bosses again shine, as their models are appropriately distinctive and interesting. Also, the combination of tribal and orchestral music completes each scene and create a fitting atmosphere for your Celtic berserkers to unleash themselves in. 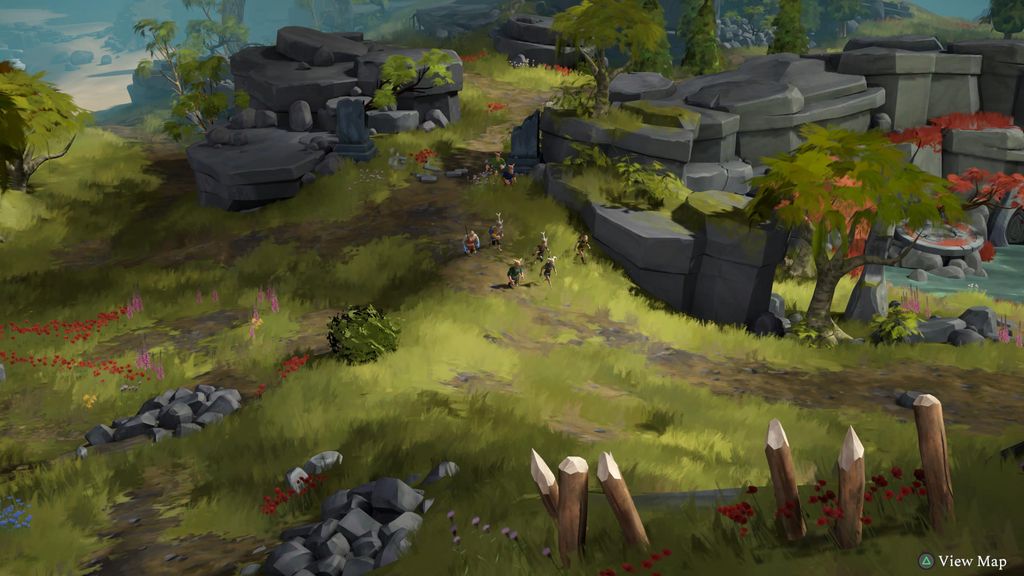 A Brutal Game With Some Nice Features, But Too Random For Its Own Good

Overall, Gods Will Fall is a difficult game to place. Normally structure is a key part of how we enjoy games. You expect a single-player campaign to advance in difficulty, complexity or even just its narrative, so as to keep it interesting. Gods Will Fall, with all its random elements, just straight up breaks the idea of structure. Furthermore, it comes across as a contrived attempt to be different, rather than a genuine creative choice.

Gods Will Fall has its problems, but it isn’t without magic. The auto-generated characters and their stories do bring a real charm. Additionally, the boss battles are a fun challenge, and the aesthetics are pleasing. However, its biggest weaknesses end up being amplified by the randomised design throughout. Games of this nature usually require a lot of patience and skill to overcome, but Gods Will Fall, unfortunately, felt too much of a test on the former to truly feel rewarding.

Whilst Gods Will Fall has the potential to provide some genuine excitement with its unique features, its randomised difficulty feels unnecessarily obtuse. There's certainly a challenge you can embrace, but it seems to come down to luck more than skill that sees you progress. If you've copious amounts of patience, Gods Will Fall has some stellar moments, but by flaw of design they are too few and far between.