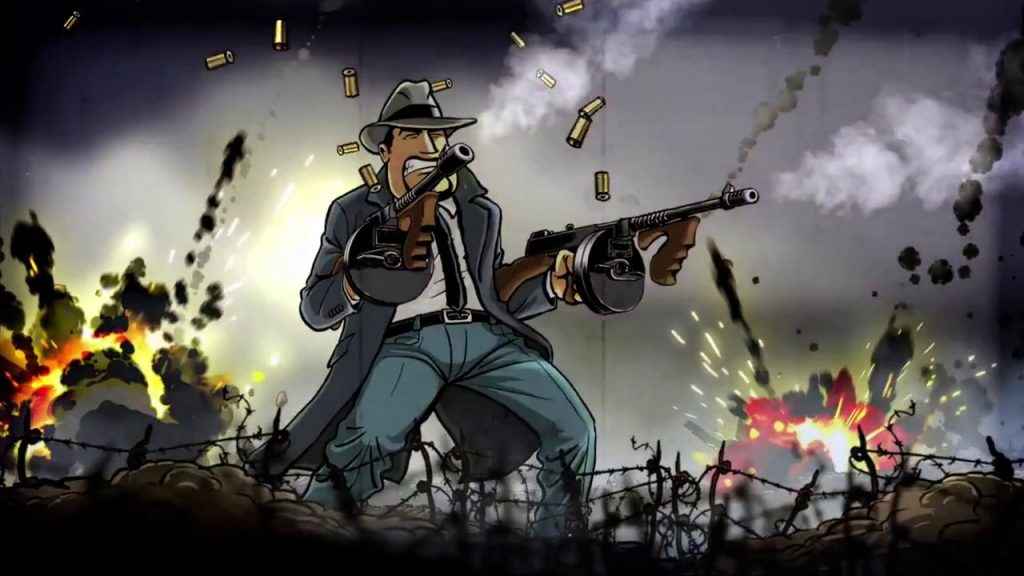 Like its immediate predecessor, Guns, Gore & Cannoli 2 is a lot of simple, dumb fun. As such, it frequently astounds me how much folk can take ‘dumb fun’ for granted, because to be good ‘dumb fun’, there are a whole lot of things that a developer needs to get right in order to make that concept both enticing and engaging for anything longer than a few minutes.

Thankfully, Guns, Gore & Cannoli 2 does just that, but it also doesn’t do quite enough to elevate itself beyond the original Guns, Gore & Cannoli. Nonetheless, folks simply looking for more of the same will find little to be disappointed with Crazy Monkey Studios sophomore series entry.

Taking place right after the events of the first game, Guns, Gore and Cannoil 2 once more puts players in the finely shined shoes, pinstripe suit and dapper hat of Vincent Cannoli, an Italian-American mobster who finds himself caught up in a war between other mafia families, the cops, the army and even a whole bunch of zombies and mutant rats.

A 2D platform shooter where Vinny must proceed from left to right, absolutely laying waste to everything and anything that moves, it’s fair to say the Guns, Gore & Cannoli 2 is very much an easy affair to get into. Harking back to a much earlier and simpler time where platform shooters where on 16-bit system, Crazy Monkey Studios latest title does everything it sets out to do – all of the guns feel great, destroying enemies feels even better and the platforming is wonderfully tactile and responsive.

In particular, the level of carnage that you can inflict in this game is quite something. In addition to the usual decapitations and dismemberments that Vinny’s sharpshooting skills can inflict, players can drop air conditioning units on top of their foes that in turn fall through several floors below, perforate explosive oil drums that cause a chain reaction of explosions, and even take control of mounted machine guns and chainsaws for maximum devastation.

The stage upon which such carnage unfolds is tremendously varied too. Guns, Gore & Cannoli 2 is a globe spanning effort that takes Vinny from the depths of Thugtown to the beaches of Second World War Normandy, and as such, always provides players with fresh locations with which to embark on their baddie murdering crusade. In addition, this sequel also allows multiple players to tackle its various levels in co-op with support for up to four players – something that proves to be a nice little addition to Guns, Gore & Cannoli 2’s solo play beats.

Guns, Gore & Cannoli 2 Makes Some Good And Bad Changes From Its Predecessor

Although Guns, Gore & Cannoli 2 is very much more of the same that we saw in the previous game, the developer has made a number of tweaks under the hood that separate it a little from its immediate predecessor. Take the controls for example. Rather than moving and aiming Vinny with a single analogue stick, here you have to aim with the right analogue stick, with the left is used for movement exclusively. Initially, this can result in some disorientation as Vinny can often turn his back to his target all too easily at first, but once you get used to it the new control scheme soon becomes second nature.

Speaking of the controls, for some inexplicable reason the jump command is mapped to the L2 button and the use command is mapped to the X button, which is a less than intuitive button mapping for an effort that leans so heavily on platforming action. Worse still is the fact that you cannot change the layout to anything better – something that would be greatly appreciated not just in the context of the inconvenient button mapping, but also in being able to change the aforementioned movement and aiming controls to your liking.

Something else that players of the original game might notice is amiss in this sequel is that you cannot throw grenades or any other kind of object. Sure, you don’t really miss it after a while when you consider the sheer arsenal of weapons you collect in the game, but still, it remains a baffling omission all the same.

Still, Guns, Gore & Cannoli 2 remains very much a title that does not stray far from the template of the previous game and nowhere is that better demonstrated than in how good the weapons all feel; the shotgun in particular satisfyingly blasts foes so hard that it looks like they’ve been yanked backwards by an invisible ripcord at incredible speed.

Guns, Gore & Cannoli 2 is a raucous though ultimate short-lived blast. Clocking in at just over three hours or so for a single playthrough, Guns, Gore & Cannoli 2 is nonetheless frequently satisfying and is at its best when you find yourself pulling off trickshots like shooting chandeliers down onto goons heads or blasting free a wrecking ball to tear through a horde of enemies or defeating a tough, end of level boss.

With its attractive cartoon visuals, wisecracking hero and oodles of platform shooter mayhem, Guns, Gore & Cannoli 2 is a highly enjoyable affair that recalls the genre classics of yesteryear – just don’t expect it to last all that long.

Guns, Gore & Cannoli 2 is out now on PS4, PC, Xbox One and Nintendo Switch.

Guns, Gore & Cannoli 2 is a frequently fun, ultra-violent platform shooter that fans of the genre should investigate without delay - just don't expect it to offer much beyond its meagre duration.