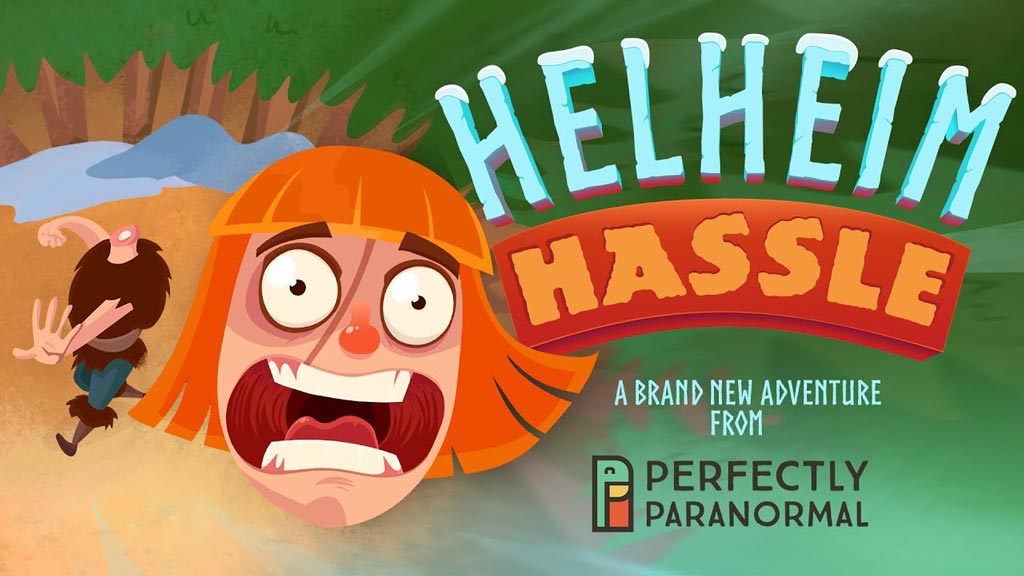 Helheim Hassle PS4 Review Like any art form, comedy is highly subjective. One person’s Disenchantment is another person’s Family Guy. Cuddly faced Michael McIntyre can fill stadiums with cackling morons laughing at his sub-standard observational comedy while Limmy attracts a handful of people at each venue on his tours who can relate to his blackly hilarious nihilistic world view. One is clearly better than the other, but hey, that’s just the opinion of this humble reviewer, and I’ll fight anyone who doesn’t agree with me.

So videogame comedy is a kettle of fish which is rarely cracked open, as it has the potential to alienate players who aren’t of the same mindset. Helheim Hassle eschews any such risks and wades into the puzzle-platformer genre with a bucketload of irreverent humour drawing from a combination of Matt Groening, Monty Python and Um Jammer Lammy. But does the combination of witty storytelling, platforming and puzzles gel like Richard Pryor and Gene Wilder or is it like putting together some Ikea furniture soundtracked by the inane quips of Russell Howard?

The story begins with young disillusioned pacifist Bjorn escaping his Scandinavian village as it is attacked by giants, but as he flees his fellow villagers who willingly sacrifice themselves to get to Valhalla (Viking heaven), he accidentally falls to his death. Centuries later, he is unwittingly revived by skeleton delivery girl Pesto on her way to Helheim (Viking hell) and the story unfolds as they make their way to Helheim for Bjorn to find sanctuary and for Pesto to collect a sword for Satan.

The beautifully realised 2D world is packed with vibrant colour and detail and the character design is varied and wittily voiced, with plenty of self-mocking humour lacing the dialogue. Despite the bizarre scenario, it’s not difficult to root for harried Bjorn who is as lovable as Pesto is annoying with her frat-girl lingo. Enabling Bjorn to weather the constant badgering of the various hindrances from the hilariously argumentative characters will spur you on for more. 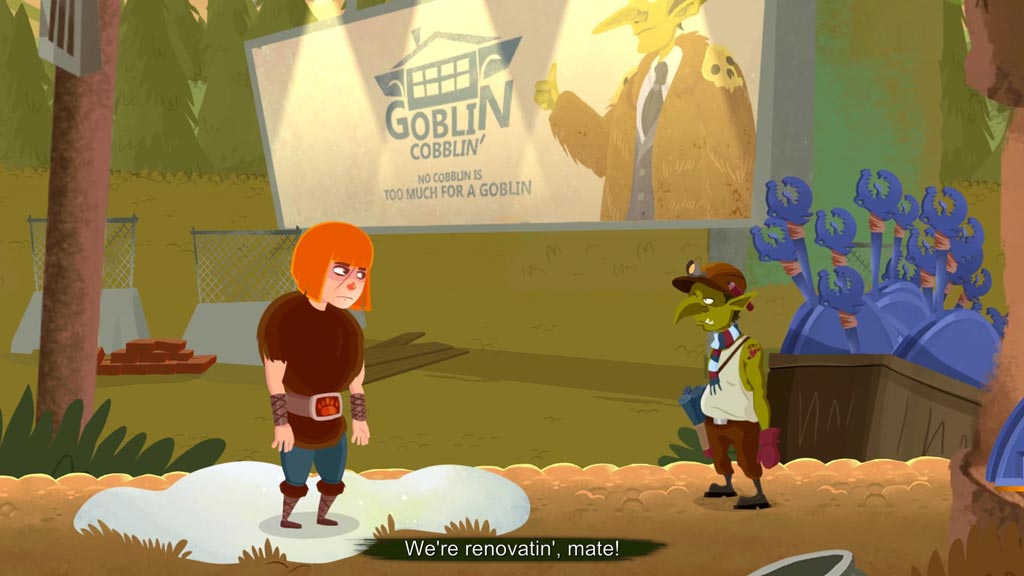 Out On A Limb

Following the introductory sequence leading to Bjorn’s reanimation, the simple platforming mechanics of jumping and climbing soon start to become complicated when the game’s USP comes into play – Bjorn’s limbs are detachable. This means he can pop off his head to roll through a narrow space in order to chat with a guard, combine a leg and an arm to nimbly climb up to a switch way above his torso and all other possible limb combinations you can think of. The game eases you in with a limb at a time, so you can get your (detached) head around the increasingly wide options for solving the puzzles.

While there are some basic platforming sequences involving quick-time responses in order to climb out of harms way, the majority of the gameplay involves clearly denoted puzzle sections. These usually involve switches which must be operated in a particular order and usually with a specific part of Bjorn’s body. Picking up your own body parts and throwing them up to hard to reach places is also key to solving most of the puzzles set on multiple levels. 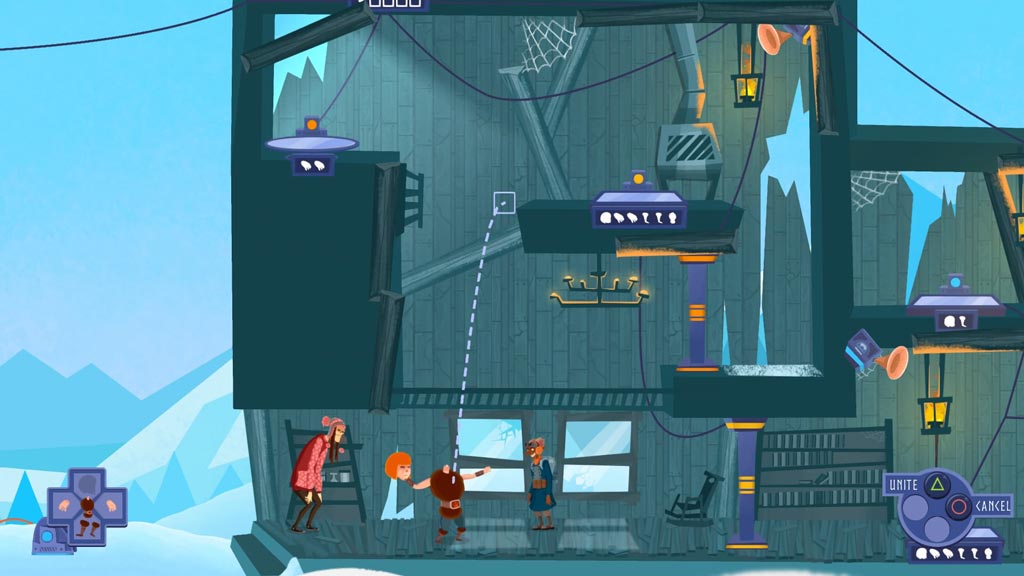 Weighted switches require a certain number of body parts (and eventually certain types of body parts) in order to activate them, and you may be required to speak to someone so your only option will be to try and get your head into a particular place with the help of a limb or two. To begin with, solving the puzzles only requires a certain amount of linear logic and they are an enjoyable distraction used to progress the story.

As more and more and limb combinations are unlocked though, the brain-teasers soon become incredibly complex and it won’t be long before your frustration leads you to an online walkthrough when you get stumped (pun-intended). Most of the time though, the puzzles are ingeniously designed and with a bit of methodical thinking can be solved fairly easily. The game offers up hints for any current side or main quests without giving the game away too much, and characters often subtly signpost the solution to a side quest which you passed earlier in the game. 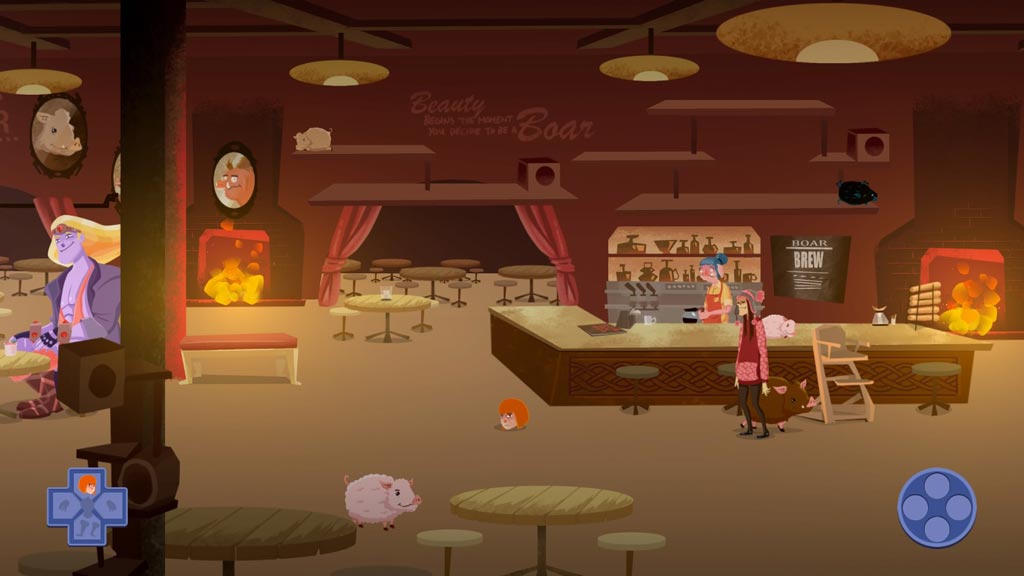 Banging Your Head Against A Brick Wall

One of the few flaws exhibited by Helheim Hassle is the limb switching mechanic which is often fiddly to navigate and unclear as to which piece of your body you are actually in control of. Using the L1 or R1 shoulder buttons cycles between your torso and whichever limbs you have detached in order to do a puzzle, or you can use the right stick to ‘point’ to them in the limb indicator circle in the bottom left of the screen.

While it’s a tad frustrating on puzzles which have no time limit, it becomes a massive pain when you’re working against the clock and you’ve accidentally switched to a limb off-screen. Of course with practice it becomes easier once you get used to the switching methods but it never feels natural and when time-crucial sequences appeared, I always ended up with a sense of resigned dread at having to replay a puzzle endlessly when I couldn’t switch to a pair of arms at the right time. Fortunately it never ruins the experience but a less clunky method would have been a boon. 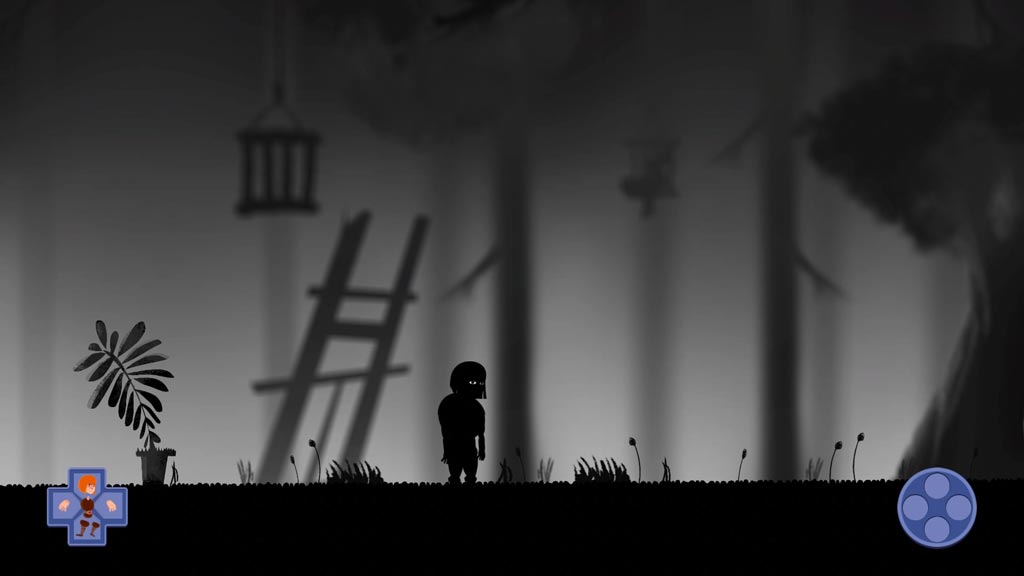 As you progress through the game, the aforementioned side quests pop up based around certain needs of the characters on the road. The majority of these can’t be solved straight away and involve backtracking when you learn a new piece of information or pick up an item which they request. Backtracking is simply done with the aid of the slightly demented cab driver who can be summoned at the taxi checkpoints throughout the game. The map also enables you to spot undiscovered sections which often contain collectables not essential for progression but they offer up a satisfying level of extra tasks for all the completists out there.

Aside from the excellent artwork, character voicing and sound design, I personally found the humour to be perfectly judged and subtle enough not to interfere with the narrative. While never laugh out loud funny, the balance of knowing deadpan jokes and abstract stupidity imbues the whole atmosphere with lovable fun and it’s a refreshing tonic to swig in-between ‘serious’ PS4 releases.

If you’re in the mood for something completely different, Helheim Hassle is well worth your time. Norwegian developers Perfectly Paranormal have combined a vast array of stupid jokes and songs into an equally diverting and taxing puzzle-platformer based around detachable limbs. While there are a healthy amount of comedy and gaming influences in the mix, the end result is refreshingly original and these days that’s a pretty rare commodity.

Helheim Hassle is out now on PS4

Using dismembered limbs to solve puzzles has never been this much fun, and aside from a few fiddly control issues, this fresh, original and highly irreverent comic book adventure through an alternative Nordic afterlife is highly recommended.