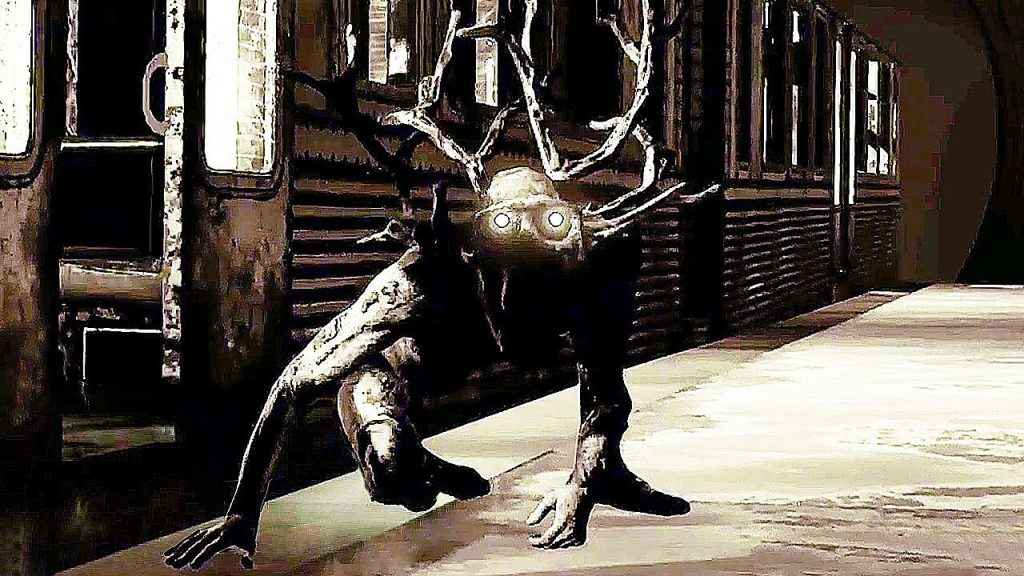 Everybody seems to think that horror games are a great thing to have in VR. The prospect of getting buckets of the brown stuff ejected from you, while equally colourful fluids attempt to escape from the opposite end of your body is apparently a great idea according to some folks. Here They Lie attempts to capitalise on this by throwing players face first into the bowels of a monochromatic hell, one that looks akin to Silent Hill if it was drenched in noir style and full of people who look like they’ve escaped from Rockstar’s Manhunt.

Right off the bat, the first thing you’ll notice about Here They Lie is that everything seems a little more blurry than usual; almost as if someone has rubbed a little bit of Vaseline over the optics of your shiny new PSVR headset. Ostensibly, the visuals in Here They Lie are arguably the softest in any PSVR title seen to date; the upshot of this being that other characters and elements of the environment seem to take on an almost mirage-like appearance when viewed at medium to long distance.

Though it’s true that your eyes will eventually adjust to an extent, no amount of lens wiping or headset adjusting will completely cure this problem simply because this is the manner in which the visuals are being rendered by the game itself. On that note, some other folks have cited Here They Lie as prime vomit material in their reviews, but speaking from my own experience, I can honestly say I didn’t feel the slightest urge to spew at any point; though of course your own mileage may vary on this and sensible use of VR must always apply.

The next aspect of Here They Lie’s design that requires a little getting used to is the player movement system. With any kind of VR hardware, allowing the player full freedom of movement around the game world can prompt queasiness in those who have yet to properly acclimate themselves. In Here They Lie, a game that is principally driven by the DualShock 4 controller, the developer has made a clever compromise that works well whereupon a deft flick of the right analogue stick can snap your perspective in 90 degree increments, while head tracking is used to gradually affect a turn, or peek around corners.

Much more of a disturbing experience rather than a bonafide game encompassing challenges and tests of reflex and skill, Here They Lie is all about distilling fear and grim wonderment into the player as they trek through an urban noir wasteland in search of a mysterious young woman called ‘Dana’. In terms of story, Here They Lie falters a little simply because it relies far too much on abstraction and allegory when a more on-the-nose approach to storytelling would have suited it better; something that is especially true of the game’s overly vague ending.

That said, for those who want to dive deeply into the somewhat obscure plot, various photos and scraps of paper can be discovered off the beaten track that helps to flesh out the overarching narrative, and these collectibles also serve to provide an extra chunk of longevity in the process. Speaking of the story, there are a number of points during Here They Lie’s modest running time where the player is forced to make a choice that affects the overall direction of the story and as such, these provide ample reason to get stuck back into the game.

As there is no combat whatsoever in Here They Lie, the various horrific looking monsters (and they are absolutely horrific, it has to be said), must be avoided and snuck past in order for you to proceed. Fortunately, even if you do die, the death system in Here They Lie turns out to be quite forgiving, as you end up re-spawning either just before the point you died, or, a little bit after. On a style note, it should be recognised that Here They Lie has one of the best ‘death’ sequences ever, because when you shuffle off your mortal coil, you awake to a blood red sun rising out of the ground and as you dash toward it, a corridor swirls and assembles before your eyes; the door at the very end of it taking you back to the hell that you just departed from. It’s a neat sequence and one that perfect dovetails with the visual nihilism that Here They Lie expresses elsewhere and throughout.

Without a doubt, Here They Lie’s greatest asset is its nerve-shredding horror and quite honestly, this game is pure nightmare fuel. Ably bolstered by some tremendously atmospheric sound design, Here They Lie runs the gamut of horror styles, ranging from more traditional jump scares to the creeping dread of someone in an animal mask running a knife up and down your torso; it’s fair to say that experiencing all of this in first person proves to be unsettling to say the least.

For those who find the dark foreboding, a torch can be switched on to alleviate this to some extent. That most recognised and trusty of horror game tropes, here it functions predictably, acting as the catalyst for many of Here They Lie’s jump scares and pant-filling scenarios, but it must be recharged with batteries that are hidden in and around each area.

An intriguing horror experiment brought to terrifying life by the power of PSVR, the brief duration of Here They Lie (it’s less than three hours long) and abstract narrative might dissuade some, but for most, the relentless barrage of nihilistic thrills and jump scare chills will prove worthy of the price of admission.

An engaging surrealist horror that is elevated by some great sound design and a wonderfully nihilistic setting, Here They Lie might not change up the formula too much but it remains an effective PSVR scare-a-thon that you don't want to leave in the ground.