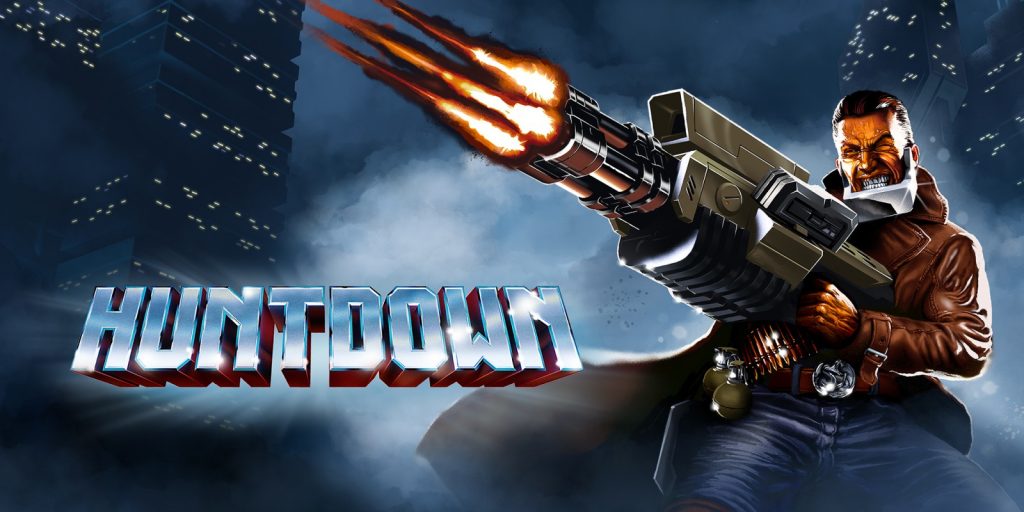 Pixel art indie side-scrolling games are a dime a dozen in recent years. Everything from Broforce to Not A Hero has tried to rekindle our love for classic-looking arcade action games. I remember playing classics like Contra and Metal Slug in my youth and in order for a game of this ilk to be successful in the modern era it needs to be memorable. It has to have some unique features and it needs to be well made, otherwise, it just ends up falling into a forgotten hole of nearly successful indie games like so many have before it.

Huntdown is a game about a city where the cops have been overrun by gangs and criminals, think of the film The Warriors mixed with a bit of Mad Max. There are hockey gangs and biker gangs and there is only one fearless set of rogues that can wrestle back control from these hoodlums – the Bounty Hunters. You control one of three deranged characters who must take out each gang in turn, kill bounty targets and try your hardest not to get filled full of lead. You can even bring a friend along in local co-op if you see fit.

The setup for Huntdown is very simple. The game is split into stages, each one controlled by one of the games unique gangs. These stages are split into sections which are controlled by another, smaller bounty target. Each small section must be completed to eventually take out the gangs boss and clear the stage. Each smaller section has sub-objectives like finding caches, killing a certain amount of enemies and completing it without dying. There is not much more to it than that really, it is simple, direct and very streamlined.

This game feels very much like a game from the ’90s. It’s brash, it’s loud, it’s full of quips and one-liners that made me smile on more than one occasion. I remember one of the characters saying “I don’t want to be crass but I’m kicking ass!” in a very low, deep action hero style voice and it made me titter to myself more than it should, then again, I am easily amused. The game is full of references and lines from other films, it was fun listening to the characters spouting nonsense as I was decimating enemies left right and centre.

Huntdown uses a cover system where you can slide behind boxes or duck into doorways to avoid gunfire and it works extremely well. This has been done in a few of these games before and it does give the shootouts a slight tactical feel which I really enjoyed. There was nothing better than running, sliding behind a crate and shotgunning two enemies faces off on the other side while avoiding their gunfire. “Is that your face?” Sweet, sweet, gruesome justice.

Each bounty you have to kill is very well designed, each boss has a certain puzzle-like quality to them and they all have unique traits and hazards that you have to overcome. Whether it is a laser security system you have to keep an eye on or a massive mech you have to destroy first, each boss was fun to fight and very different from each other. Each game section is quite short too so it was never too long between these interesting boss fights, which kept the game fresh and enjoyable.

Each of the stages is proceeded by a short animated cutscene where you are given the details of your bounty by a mysterious lady called Rose. This does add a bit weight to all your killing and her hazy figure speaking to you through a crackly monitor before each stage adds a bit of depth to the story. It really did make you feel like a bad-ass bounty hunter clearing the streets and mowing down crazy gang leaders.

Tools Of The Trade

Your character, depending on who you pick starts with a standard weapon and a special ability. You are treated to a massive amount of interchangeable weaponry as well as throwable explosives and juggling them depending on your foes was an enjoyable balancing act. Should you take the rocket launcher? Should you take the heavy machine gun? It always depends on your situation, your starting weapon has infinite ammo too, so you never end up in a position of having nothing to use. It also allows you to try everything without the detriment of having ammo shortages.

The pixel art in Huntdown is superb. I love pixel art, it’s not everyone’s choice of graphical style but I love being reminded of games of old and I like to see something I know has been carefully handcrafted. Someone has painstakingly designed all the artwork and in Huntdown, it is simply beautiful. The environments are dense, intricate and very detailed. The explosions, gunfire and weapons look great and when all this comes together in a massive shootout, it’s beautiful to see. Crates exploding, blood flying and heads rolling. It’s gorgeous.

The sound design is also very good. From the crunchy soundtrack to the deep old-school narrator’s voiceover lines, everything is how it should be for a game like this. I really like how the gameplay, sound work and pixel art faithfully recreate a game from the ’90s and give it an old-school action movie feel. Just hearing the narrator saying things like “Engage” or “Bounty Collected” at the start and end of every level is great. His gravelly tones really fit the game to perfection.

I really enjoyed my time with Huntdown, it looks great, plays well and sounds fabulous. I cannot really think of anything negative to say about it really. Perhaps I would have liked it to push the boat out a little by trying something new but what we have is a great, fun, action video game regardless. The bosses are varied, beautifully designed and a pleasure to take on. The levels are short and never tiring, the characters fun and amusing and I thoroughly enjoyed playing it through to its finish. Right, I need to get back to the streets before the gangs take over again.

Huntdown is out now for PS4.

Enjoyable, brash and well designed. Huntdown is a fun action game full of charm and swagger. It has short, enjoyable levels and very well designed bosses. It's streamlined, old-school and not bloated in any way whatsoever. I thoroughly enjoyed my playthrough and may return at some point to mop up a few things I missed.