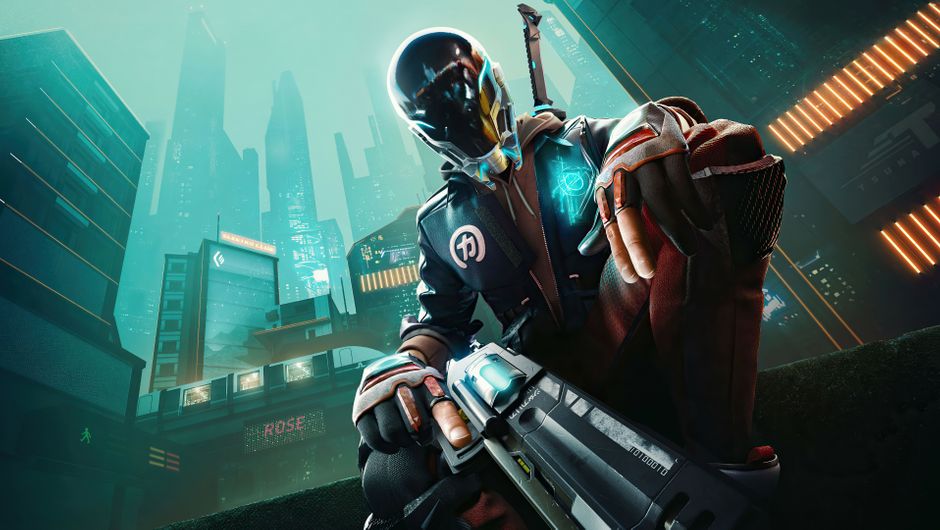 Hyper Scape PS4 Review – Ubisoft‘s free-to-play Battle Royale, Hyper Scape, has left beta and has now officially launched alongside its season 1 battle pass. Wading into the crowded market of battle royale games is no small task, so what does it do differently and is it enough to stand out amongst its competitors?

The premise for battle royale is very familiar at this point and the principles of the genre are largely the same in Hyper Scape. You drop from the sky, this time in pods, and land with nothing but a disappointing melee attack. You scramble for weapons and equipment to survive, and you eventually acquire a desired loadout. The goal is to be the last team/man standing as the map closes in on you, forcing those hiding to fight.

In my time with Hyper Scape, I have to say I found the the gunplay lacking and rather unsatisfying. I never settled on a weapon that I really enjoyed using. Although it has already seen a nerf, the Hexfire, mini-gun type weapon is the go to, which makes for a frustrating experience, especially when you don’t have one. If you find a duplicate of a weapon you’re carrying then you can fuse them, which provides upgrades such as increased magazine capacity to your weapon of choice.

Whether you’re running a shotgun, sniper rifle, or SMG, all ammo is universal, meaning you should never really have a problem running out of it, which actually removes a thrilling gameplay aspect of the battle royale experience – having to sometimes survive on minimal resources. When you eliminate an opponent, there will always be ammo scattered amongst their dropped loot. This does, however, allow for the game to move at a faster pace.

The most interesting part of Hyper Scape for me are the “hacks”, which work in the same way as abilities. However, they aren’t exclusive to characters like you would see in games such as Apex Legends. Hacks can be found on the map like all other items, and each offers a different tactical advantage. These hacks will almost certainly define the meta of the game, especially as there’s a balancing issue where some are far more advantageous than others.

Hacks such as being able to don an invisibility cloak, or turn yourself into a bouncing ball, allow for you to escape a fight that isn’t going your way. Whereas others such as health stim will assist in surviving a gunfight. I particularly enjoyed the wall hack, as being able to cut off a route for my opponent with a materialised wall and then dispatching them as a result, was very satisfying. Much like the guns in Hyper Scape, the hacks can also be fused together when finding replicas, allowing for those to be upgraded in the same fashion.

There Is More Than One Route To Victory

Hyper Scape differs from other battle royale games in that it offers more than one way to win a round. Crown Rush isn’t just a name for the sake of it. A crown spawns in the final stages of a game. Meaning you or your team can win a game by holding onto the crown for 45 seconds. Of course, the downside to that is that you will appear on everyone’s radar. This makes for interesting scenarios where players who have avoided fights and used stealth to make their way to end game, will be forced to fight, adding an interesting layer to the multiplayer sub-genre, by essentially combining capture the flag with battle royale.

Hyper Scape has both squads and solo modes with an unknown mode coming in the near future. I found solos to be more fun as having no chance of being respawned back into the game, makes every play feel like a gamble. Being downed in squads, however, doesn’t mean you’re out of the game. You can still move around the area, provide comms to your teammates until you move to a specific plate where you can be revived. Whilst in a downed but not out state, you can’t inflict any damage, but it does mean you can still offer something to your team. This is one of my favourite aspects of Hyper Scape.

The map in Hyper Scape named “Neo Arcadia” has a very pristine, professional aesthetic to it. It is a metropolis that is surrounded by a grid which is reminiscent of Tron. However, it comes off as lacking personality. The map certainly feels and looks different to others found in competing battle royale games, but unfortunately, it just feels bland. Although, it does offer a lot in terms of verticality. You find yourself using jump pads and double jumps to traverse the rooftops, to gain a height advantage over your opponents.

Incidentally, the aesthetic allows for an interesting twist on the enclosing zone that is a staple of battle royale. Hyper Scape uses collapsing sectors as a means to shrink the map. Portions of the map will be erased over time, forcing competitors out of these areas as they’re dematerialised and shrinking the map in the same way an enclosing zone would. Escaping a dematerialising zone can make for a thrilling experience, especially when you have the appropriate hacks to assist in that.

Similar to the map itself and the backstory, the characters or champions as they are named, are also quite bland. They’re devoid of personality and feel like empty vessels for you to inhabit. By allowing hacks in exchange for character abilities it simultaneously creates arguably a fairer gameplay experience, but in doing so, removes any identity their champions could have had. Especially when their backstories (if you can call them that), are drastically lacking.

Without abilities, perks, personality, or interesting character design, choosing who to use feels inconsequential and thus the battle pass feels entirely undesirable unless you want character or weapon skins. The battle pass consists almost entirely of cosmetics, and some of those on the supposedly “free track” are in fact locked behind an Amazon Gaming subscription. The in-game currency is suitably named Bitcrowns, which you can purchase in the in game store, or unlock a small amount via the battle pass itself.

Hyper Scape Doesn’t Do Enough To Stand Out

The entire aesthetic of Hyper Scape, whilst very polished, feels like an amalgamation of sci-fi properties that have come before it, creating a vacuum of personality, which is almost required to stand out in an already saturated market. The soundtrack is electronic and quite generic, albeit serviceable. The effects and sound cues are suitable for the overall aesthetic too, as everything has a sort of crisp, clean, totalitarian feel to it.

Hyper Scape has some cool ideas, and there’s potential for a good game eventually. Unfortunately, in its current state, it is an entirely inoffensive, generic, lacklustre battle royale that doesn’t do enough to stand out in a genre where so many games are vying for your time. However, if the studio can do it, Hyper Scape wouldn’t be the first time Ubisoft has turned a game around.

Whilst Hyper Scape has some interesting ideas that make for fun and thrilling gameplay scenarios, the game does very little to stand out amongst its competitors. Although it is lacking in personality and lore, future updates could allow Hyper Scape to carve out an identity of its own. However, currently, it will do little to pull you away from your preferred battle royale game, and if you're not a fan of the genre, it won't make you a believer.